The occipital lobe is primarily responsible for visual processing. It contains the primary and association visual cortex.

The occipital lobe is the visual processing area of the brain. It is associated with visuospatial processing, distance and depth perception, color determination, object and face recognition, and memory formation. The primary visual cortex, also known as V1 or Brodmann area 17, surrounds the calcarine sulcus on the occipital lobe's medial aspect. It receives the visual information from the retina via the thalamus. The secondary visual cortex, also known as V2, V3, V4, V5, or Brodmann areas 18 and 19, surrounds the primary cortex and receives information from it.

The occipital lobe of the cerebral cortex derives from the telencephalon. Thus, its embryologic development is associated with the development of telencephalon. At two weeks of conception, the embryo is a two-layered structure. During the third week, gastrulation divides the embryo into three layers – the endoderm, mesoderm, and ectoderm. The ectodermal stem cells give rise to the brain and central nervous system.

The telencephalon undergoes growth and infoldings to form two cavities. The cavities give rise to cerebral hemispheres and the lateral ventricles. At five months, the hemispheres have expanded to occupy most of the brain cavity. At eight months, the gyri and sulci become prominent.[4]

Surgery of the occipital lobe is important for lesions such as gliomas and metastases. Neurosurgeons can approach these lesions through a trans-sulcal approach, or use sulci as an anatomical guide to perform en bloc resection. Sometimes surgeons access the occipital lobe to approach deeper structures of the brain. The detailed knowledge of its structure and anatomical map facilitates surgeries involving the area. Studies show that the location of the calcarine sulcus is invariably in the posterior interhemispheric fissure region. It has a minimal number of side branches and always arises from the parahippocampal gyrus. Thus, making it an important landmark for surgical approaches to the area. On the lateral surface, the transverse sulcus is most consistently present.[1][2]

Surgery has also proven successful in patients of medically-resistant occipital lobe epilepsy (OLE). However, it is challenging to identify the entire epileptogenic zone on magnetic resonance imaging (MRI) or ictal electroencephalography (EEG). Additionally, resection of the lesion is often limited in an attempt to preserve the visual field, often leading to worse outcomes. Postoperative visual deficits are common with OLE surgery.[6]

Injury to the occipital lobe can occur due to vascular insults, neoplastic lesions, trauma, infections, and seizures. Depending on the type and location of the injury, specific neurological deficits can occur.

Anton syndrome is sometimes present in patients with cortical blindness. It occurs in cases of insult to the occipital lobe. The patient persistently denies loss of vision and is unaware of the visual deficit, despite evidence of cortical blindness. Confabulation often accompanies this deficit.[7][8]

Another rare syndrome associated with occipital lobe injury is Riddoch syndrome. The person is only able to see moving objects in the blind field, while non-moving objects are invisible. The person has motion perception while unable to perceive shape or color.[9]

Occipital lobe epilepsy is relatively uncommon but often presents with specific neurological findings. Seizures originating in the occipital lobe are associated with visual hallucinations, blurring or loss of vision, and rapid eye blinking or fluttering of eyelids. The seizures usually occur after a bright visual image or flicker stimulus.[10] 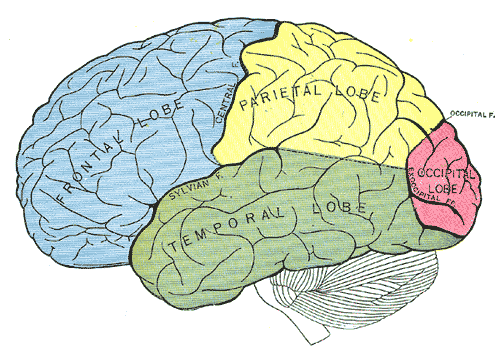