The nucleus ambiguus is the common nucleus of the efferent fibers for glossopharyngeal (CN IX) and vagus (CN X) nerves. The name ‘ambiguus’ originates from its difficult-to-find location and variation in different species. Its location is in the reticular formation in the medulla oblongata. The nucleus ambiguus provides fibers that innervate the somatic muscles of the pharynx, larynx, and soft palate. Additionally, the nucleus ambiguus plays a role in parasympathetic cardiac inhibition through CN X. Unilateral lesions of the nucleus ambiguus may lead to dysphagia and hoarseness, and these characteristics are classic in lateral medullary syndrome (Wallenberg syndrome).

The nucleus ambiguus is the location of cell bodies of motor nerves that innervate the ipsilateral muscles of the soft palate, pharynx, larynx and upper esophagus and are mainly responsible for swallowing and speaking. Its location is in the reticular formation of the medulla oblongata, the lowest part of the brainstem. The nuclei are in the lateral regions of the rostral medulla posterior to the inferior olive.

The nucleus ambiguus is involved in the motor functions of swallowing and speech. It gives rise to the efferent motor fibers of the vagus nerve (CN X) that innervate the muscles of the soft palate, larynx, pharynx, as well as the stylopharyngeus muscles and pharyngeal constrictor muscles of the glossopharyngeal nerve (CN IX).[1] The muscles controlled by the nucleus ambiguus initiate the mechanism of swallowing and phonation.

The spinal cord is composed of three layers: ventricular zone, intermediate zone, and marginal zone. The ventricular zone develops into two collections of cells forming the alar plate and basal plate. The alar plate cells become the afferent (sensory) neurons and form the posterior (dorsal) column of the spinal cord. The basal plate cells become the efferent (motor) neurons of the anterior (ventral) spinal cord.[5] The nucleus ambiguus arises from the basal plate motor neuroblasts, which also gives rise to dorsal motor nucleus of the vagus nerve, the inferior salivatory nucleus of the glossopharyngeal nerve, and hypoglossal nucleus. The separation between the sensory and motor neurons is maintained in the brainstem and the sulcus limitans, which is a narrow groove on the floor of the fourth ventricle, maintains this separation.

The medulla oblongata, the brainstem region location of the nucleus ambiguus, receives its blood supply from the vertebrobasilar system. The dorsolateral region of the medulla receives its blood supply from the posterior inferior cerebellar artery (PICA), a branch of the vertebral artery. The medial medulla gets supplied by the anterior inferior cerebellar artery (AICA), which branches from the basilar artery.

The nucleus ambiguus provides innervation to the muscles of the soft palate, larynx, and pharynx by contributing motor fibers to three cranial nerves: glossopharyngeal (CN IX), vagus (CN X), and spinal accessory (CN XI)  nerves. Axons leaving the nucleus ambiguus exit the medulla dorsally to the inferior olive to join fibers with the three cranial nerves. These three cranial nerves innervate the striated muscles of the soft palate, larynx, pharynx, and upper part of the esophagus. The glossopharyngeal nerve innervates the stylopharyngeus muscle; the vagus nerve innervates palatal muscles, pharyngeal and laryngeal muscles, and striated muscle of esophagus-palatoglossus; the spinal accessory nerve innervates the cranial portion of the laryngeal muscles.

Additionally, the nucleus ambiguus receives fibers from neighboring nuclei, such as the sensory spinal trigeminal nucleus and nucleus solitarius to comprise the gag reflex. The gag reflex is composed of a sensory and motor part. The sensory limb is from CN IX, which synapses in the spinal trigeminal nucleus and the nucleus solitarius. The motor limb is from CN X from the nucleus ambiguus, and stimulation of the motor limb causes movements of the tongue and soft palate muscles.

The nucleus ambiguus is associated with both motor functions involving the muscles of the soft palate, throat, and tongue, as well as autonomic processes such as the gag reflex and cardiac parasympathetic activity. Lesions and ischemic events that affect the lateral medulla may compromise the nucleus ambiguus.

Lateral medullary syndrome, also known as Wallenberg syndrome or PICA syndrome, is a constellation of neurological symptoms that occurs due to ischemia in the lateral part of the medulla. The blockage most often occurs in the vertebral artery or PICA, a branch of the vertebral artery that supplies the lateral medullary region. The classic presentation includes dizziness, loss of balance, difficulty swallowing, and slurred speech. Unilateral lesions that affect the nucleus ambiguus cause an ipsilateral paralysis of the soft palate, larynx, and pharynx. Specifically, the symptoms of dysphagia, dysphonia, and dysarthria are due to the loss of the nucleus ambiguus. Although hoarseness can occur, speech is usually intelligible. Dysphagia is typically not severe; however, a feeding tube might be necessary for transient aphagia resulting from the lesion. During gag reflex testing, the palatal muscles are unable to contract and the uvula contracts away from the affected side.

Besides motor loss, lesions affecting the nucleus ambiguus can also disrupt the sympathetic and parasympathetic cardiac reflexes, resulting in orthostatic hypotension.[6] Although lateral medullary syndrome most often occurs from a stroke, rarely neoplastic disease such as a medullary glioma might also cause identical symptomology.[7] However, whereas lateral medullary syndrome causes an acute onset of symptoms, neoplastic processes are differentiated by a more gradual process and worse prognosis.

Bilateral lesions of the nucleus ambiguus completely paralyze the larynx, and the inability to move vocal cords during inspiration can cause death. Bilateral lesions are rare and most often seen in severe amyotrophic lateral sclerosis (ALS).

Sandifer syndrome is a lesser-known disorder mainly seen in infants that also implicated the nucleus ambiguus in its reflex arc. This syndrome results in reflex torticollis in infants with gastroesophageal regurgitation syndrome or a hiatal hernia. This reflex is under the mediation of the afferents traveling to the nucleus solitarius, which reaches the nucleus ambiguus and the dorsal vagal nucleus. From these nuclei, visceral efferent nerves travel via anastomosis to reach the accessory nerve and thus contract the trapezius and sternocleidomastoid muscles. The head positioning from torticollis is hypothesized to provide relief from acid regurgitation.[11]

Cardiac vagal neurons, such as the nucleus ambiguus and dorsal motor neuron, regulate cardiac parasympathetic tone. However, in disease states such as myocardial infarction, cardiac vagal activity is reduced. This situation causes undue stress on the heart, while restoration of parasympathetic function can decrease cardiac work and lessen the risks of ischemia and arrhythmias.[12] Additionally, diabetes disrupts the baroreceptor sensitivity, and researchers found it to cause nucleus ambiguus degeneration in mice.[13] This finding explains why reflex-bradycardia may suffer impairment in patients with diabetes.

The nucleus ambiguus, therefore, is implicated in a wide range of clinical pathologies due to its critical control of speech, swallowing, and autonomic functions. 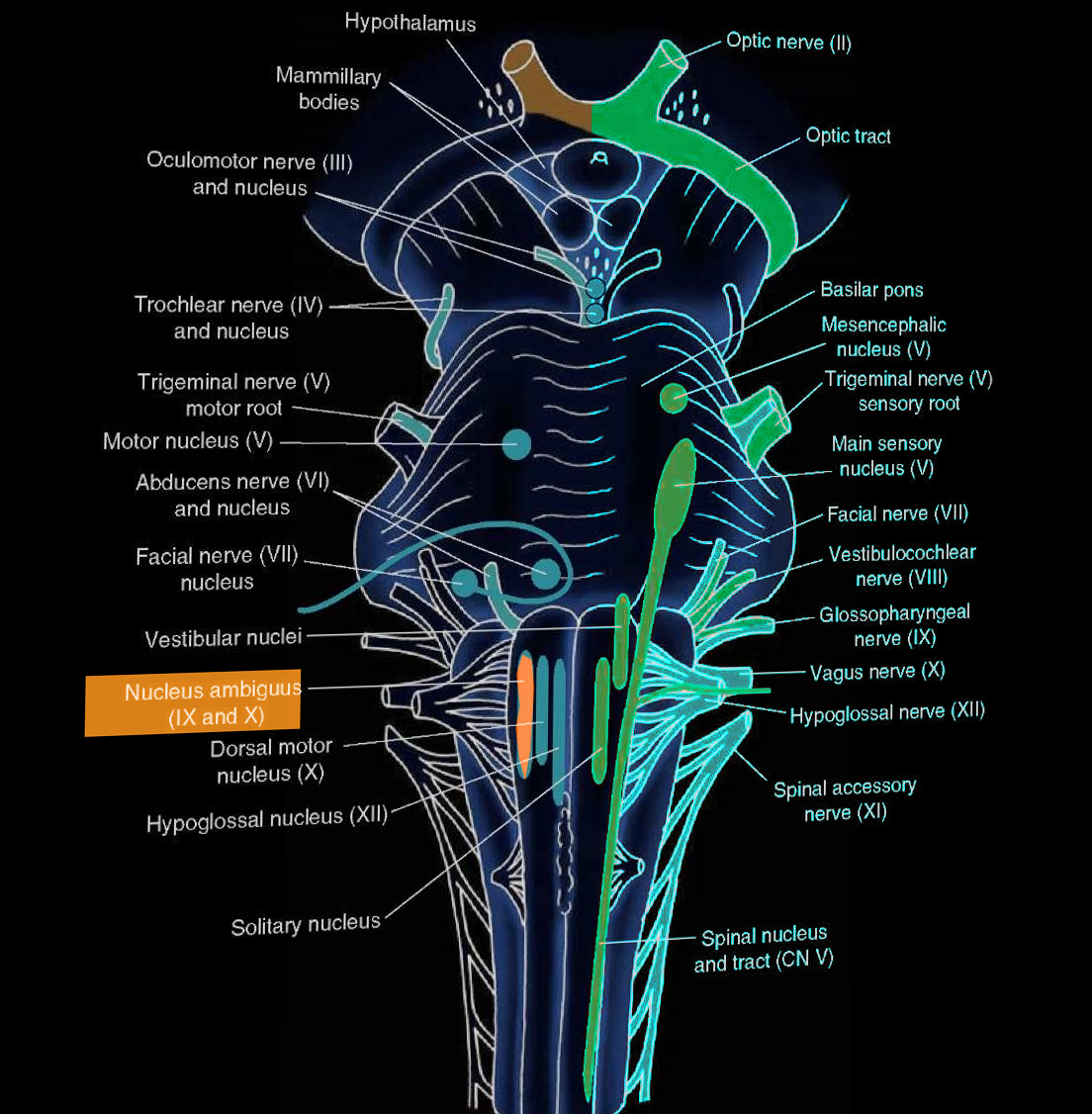