Necrobiosis lipoidica (NL) is a rare, chronic, idiopathic, granulomatous disease of collagen degeneration with the risk of ulceration, classically associated with diabetes mellitus, usually, type 1. This activity reviews the pathophysiology of necrobiosis lipodica and highlights the role of the interprofessional team in ensuring best patient outcomes..

Necrobiosis lipoidica (NL) is a rare, chronic, idiopathic, granulomatous disease of collagen degeneration with the risk of ulceration, classically associated with diabetes mellitus, usually, type 1. There is thickening of the walls of the blood vessels, and deposition of fat. The major complication of the disease is the formation of ulcer, mainly occurring after trauma. Uncommonly, infections can also occur. Moreover, if necrobiosis lipoidica becomes chronic it may rarely turn into squamous cell carcinoma.[1][2][3]

In 1935, the first case was reported by Goldsmith in a nondiabetic patient. Subsequently, more cases of NLD were described by Meischer and Leder in nondiabetic patients in 1948. In 1960, Rollins and Winkelmann also published about NLD in nondiabetic patients. Hence, the suggestion to exclude diabetes from the name of the disease was put forward.[4] Today, a broader term necrobiosis lipoidica encompasses all patients having same clinical lesions without taking into account the presence or absence of diabetes.

The cause of necrobiosis lipoidica remains unknown. Elements of a vascular disturbance involving immune complex deposition or microangiopathic changes leading to collagen degeneration have been the most common theories.[5] Following are some theories that have been proposed over time about the etiology of the disease:

Additionally, it has been theorized that the etiology of necrobiosis lipoidica is associated with abnormal collagen. It is a well-recognized fact that abnormal collagen fibrils are responsible for diabetes-related end-organ damage and expedited aging. In diabetes, collagen cross-linking increases as a result of elevated lysyl oxidase levels. This increase in collagen cross-linking could cause thickening of the basement membrane in necrobiosis lipoidica.

It also has been observed that there could be defective neutrophil migration causing an increase in the number of macrophages, possibly justifying the formation of granuloma in necrobiosis lipoidica.

Tumor necrosis factor (TNF)–alpha has been observed to play a potentially crucial role in diseases such as necrobiosis lipoidica and disseminated granuloma. It is found raised in the sera and skin of the patients suffering from these conditions.

Although it may present in healthy individuals with no underlying disease, other commonly associated conditions are thyroid disorders and inflammatory diseases, such as Crohn disease, ulcerative colitis, rheumatoid arthritis, and sarcoidosis. In one series, researchers found surprisingly lower rates of arterial hypertension than in the standard population, while obesity and fatty acid disorders were at a standard rate. No evidence for the induction of necrobiosis lipoidica by infection or underlying malignancies was found among those patients.

There appears to be a predominance of 77% in females.[7] Also, the onset in women is younger than in men. Necrobiosis lipoidica has an average age of onset between 30 and 40 years.

A study by Hashemi et al observed that in patients having necrobiosis lipoidica, those with diabetes had the median age of 45 years as opposed to 52 years in patients who were not suffering from diabetes.[8]

Erfurt-Berge et al carried out a retrospective study on 100 patients having necrobiosis lipoidica and found that female sex and middle age were characteristic in patients with the condition. The investigators also published that ulceration which was seen in 33% of patients was most prevalent in men and in patients suffering from diabetes mellitus and that thyroid problems occurred in 15% of all patients.[9]

An immunologically mediated vascular disease has been suggested as the primary cause of the altered collagen. The most common vascular abnormalities seen in necrobiosis lipoidica lesions are thickening of the vessel walls, fibrosis, and endothelial proliferation leading to occlusion in the deeper dermis, especially in patients with diabetes. Deposition of fibrin, IgM, and C3 at the dermo-epidermal junction of blood vessels has been shown in immunofluorescence studies.[10]

Histopathologically biopsy specimens, from the palpable inflammatory border, reveal scattered palisaded and interstitial granulomatous dermatitis with layered tiers of granulomatous inflammation parallel to the skin surface involving the entire dermis and extending into the subcutaneous fat septae. The epidermis is normal or atrophic. Focal loss of elastic tissue can be demonstrated in areas of connective tissue sclerosis. There is no significant mucin deposition in the center of the palisading granulomas, in contrast to granuloma annulare.

Necrobiosis lipoidica demonstrates interstitial and palisaded granuloma formation that include the subcutaneous layers and dermis. The granulomas are organized in a layered manner and are admixed with patches of collagen degeneration. The granulomas are comprised of histiocytes, lymphocytes, plasma cells, and eosinophils. A decrease in the number of dermal nerves is another feature of necrobiosis lipoidica.

The prime findings on histopathology are endothelial cell swelling and thickening of the blood vessel walls from the middle to deep dermis, also a characteristic of diabetic microangiopathy.

A study by Ramadan et al observed that cutaneous sarcoidosis can be differentiated from necrobiotic granulomas with the help of dermoscopy. They found that cutaneous sarcoidosis varies dermoscopically from necrobiotic granulomas due to the presence of a pink homogenous background, white scarlike depigmentation, translucent orange regions, and fine white scales.[13]

Necrobiosis lipoidica is characterized by yellow-brown, atrophic, telangiectatic plaques with an elevated violaceous rim, typically present in the pretibial surface. Less typical anatomic locations include the upper extremities, face, and scalp, where lesions may be more straight or wavy and are less weakened.

Lesions usually begin as small, firm, red-brown papules that gradually enlarge and then develop central epidermal atrophy. Ulceration occurs in approximately a third of lesions, usually following minor trauma. The plaques are usually multiple and bilateral. These lesions can Koebnerize if they are traumatized.[14] Therefore, surgical treatments represent a challenge.

Skin lesions in classic necrobiosis lipoidica start as 1- to 3-mm, well-demarcated papules that expand to become plaques with more-indurated borders and waxy centers. In the beginning, these plaques are red to brown but progress to become more yellow, shiny, and atrophic. (As shown in the image)

The disease course appears more severe in men as they have a higher likelihood of ulceration in their lesions, reported in 58% of males vs. 15% of females. Decreased sensation to pinprick and fine touch, hypohidrosis, and partial alopecia can be found within NL plaques. Rare reports show squamous cell carcinoma developing within lesions of NL.

Although the diagnosis often is based on clinical examination, a biopsy should be performed to differentiate necrobiosis lipoidica from conditions with similar clinical appearances, including granuloma annulare and necrobiotic xanthogranuloma.

If there is a concern for venous disease or peripheral arterial disease, further studies should be considered. Baseline blood work should include fasting blood glucose or glycosylated hemoglobin to screen for diabetes or assess glycemic control in patients known to have diabetes. If these are not diagnostic, they should be repeated on a yearly basis, as necrobiosis lipoidica can be the first presentation of diabetes.

The differential diagnosis includes mainly granuloma annulare, necrobiotic xanthogranuloma, sarcoidosis, diabetic dermopathy, and lipodermatosclerosis. Lesions of granuloma annulare and sarcoidosis generally do not exhibit the same degree of atrophy, telangiectasias, or yellow-brown color. Additionally, the appearance of lipid and decreased amount of mucin in necrobiosis lipoidica helps to differentiate from granuloma annulare.[15]

No treatment has proven to be effective. In patients with diabetes mellitus, control of blood glucose usually does not have a significant effect on the course. In the absence of ulceration or symptoms, it is reasonable not to treat necrobiosis lipoidica given that up to 17% of lesions may resolve spontaneously. Compression therapy controls edema and promotes healing in patients with associated venous disease or lymphedema.[16][8][17]

When ulcerations are present, proper wound care principles are important. First-line therapy includes potent topical corticosteroids for early lesions and intralesional corticosteroids injected into the active borders of established lesions. For inactive, atrophic lesions, topical steroids should be avoided as they may exacerbate the atrophy and increased the risk of new ulcerations.

Calcineurin inhibitors inhibit T-cell activation by blocking calcineurin resulting in both anti-inflammatory and immunomodulatory effects. Topical tacrolimus has been shown to be effective in resolving ulceration associated with necrobiosis lipoidica.[18][19][20]

TNF is an important regulator of the formation of granulomas. The monoclonal antibodies adalimumab and infliximab bind directly to soluble TNF-alpha to prevent its action. Etanercept is a fusion protein made up of the Fc portion of human IgG1 and TNF receptors that also inhibit TNF function. Both etanercept and infliximab have been repeatedly found to be effective as monotherapy for ulcerating necrobiosis lipoidica.

The clinical presentation of necrobiosis lipoidica is distinct, still there are many atypical appearances, and early presentations can be hard to recognize.[21] Following are some important considerations:

From an aesthetic viewpoint, the prognosis of necrobiosis lipoidica is not reassuring. Treatment can be helpful in halting the expansion of lesions that tend to have a chronic course. Lesional ulcerations can result in significant morbidity, requiring extensive wound care. These ulcers can be painful. They may become infected or heal with scarring.

Following are some complications of necrobiosis lipoidica:

Patients should also be made aware of the drug treatments available and their possible adverse effects.

Once they have an ulcer they should be made knowledgeable about proper wound care in the community by the community wound nurses.

Ulcerative skin lesions may complicate the course of the disease, especially in patients with diabetes, but also in patients with arterial hypertension and/or those who are overweight. There is no data to support any preventive measure for necrobiosis lipoidica.

Necrobiosis lipoidica is a rare skin complication of type 1 diabetes. However, its diagnosis and management are exceedingly difficult. The skin lesions are best managed with an interprofessional team that includes a dermatologist, endocrinologist, wound care nurse, internist, and infectious disease specialist. There is no specific treatment for NL. The key is to ensure that diabetes is well controlled. Open wounds and ulcers need to be managed by a wound care nurse. Many newer biological agents have been used to treat skin disorder but without clinical trials, it is difficult to know the effectiveness of these agents. These patients need long-term follow-up as the wound closure can take months. Some people may benefit from compression therapy and stockings.[22] 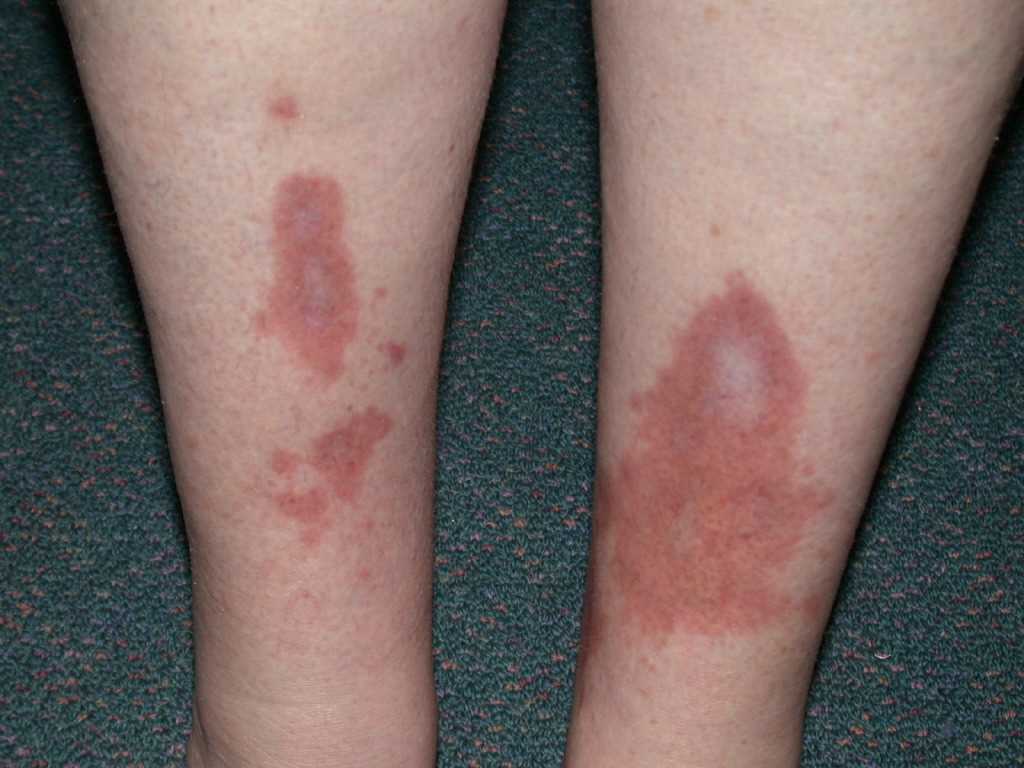 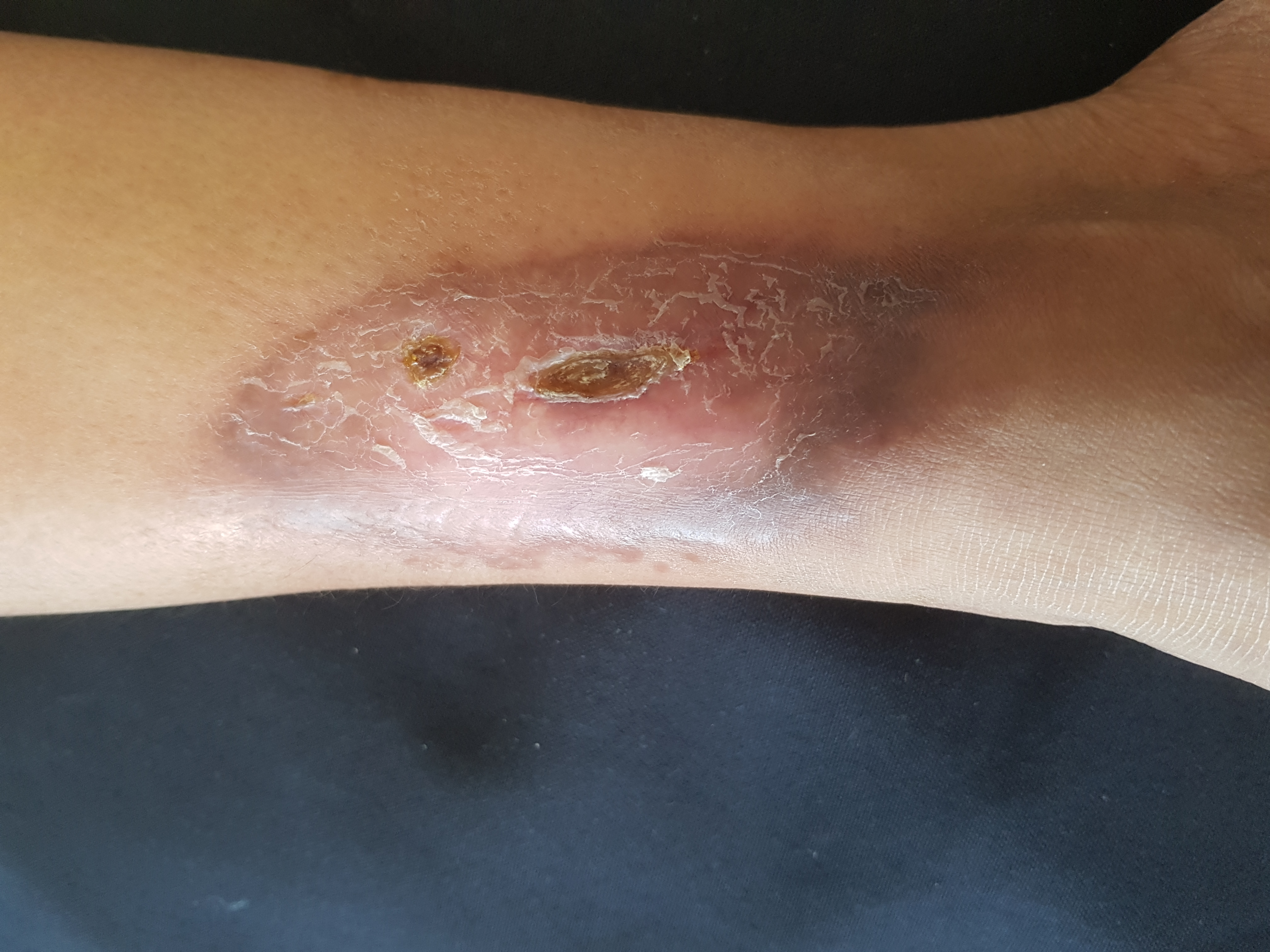 Necrobiosis lipoidica
Contributed by the Dermatologic Institute of Jalisco, México 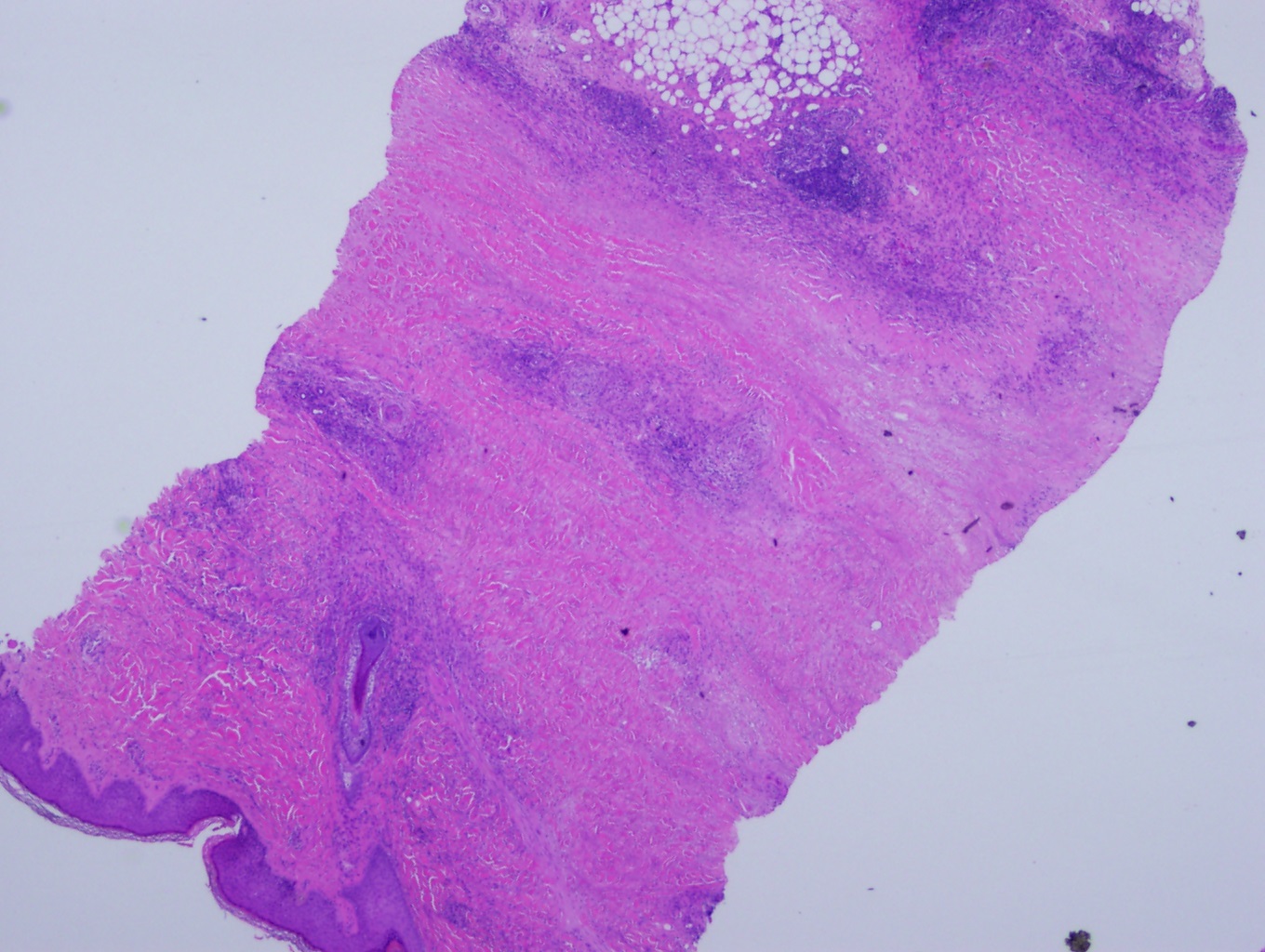