Interpolated flaps, along with rotation, transposition, and island flaps, are further classified as pivotal flaps. In general, the greater the pivot of the flap results in a shorter the effective length. However, interpolated flaps differ from transposition flaps in that the base is not contiguous with the defect and passes over the intervening tissue.[1][2][3][4]

When planning for reconstructions, dividing the forehead into 3 zones assists in proper planning. The forehead can be divided into median, paramedian, and lateral zones with differing blood vessels in each zone. The midline forehead tissue can be transferred as a paramedian forehead flap based upon a unilateral supratrochlear pedicle with enough skin to resurface an entire nose. This pedicle is based upon the supratrochlear artery and vein.

The forehead skin blood supply is from the supratrochlear, supraorbital, superficial temporal, and dorsal nasal artery (from the angular artery). The supratrochlear artery exits the orbit through the orbital septum and passes under the orbicularis oculi and over the corrugator supercilii.

The supratrochlear artery arises from the internal carotid arterial system, exits the superior medial orbit between 1.7 to 2.2 cm lateral to the midline, and continues vertically 2 cm lateral to the midline in the paramedian section. It has been noted that the glabellar crease at the medial eyebrow delineates where the supratrochlear artery crosses the superior orbital rim. The artery travels within the subcutaneous/subdermal tissue plane 1 cm superior to the level of the eyebrow. The paramedian forehead flap should be designed vertically to include the vertical axial blood supply. Axial pattern flaps contain an artery that is parallel to the linear axis of the flap. This artery provides nourishment to the flap. The axial vessels lie in the subcutaneous tissue just deep to the dermis above the mid-forehead and near the hairline. In this location, it is safe to elevate the distal 1 to 2 cm of the flap with skin and a thin layer of subcutaneous tissue. However, to protect the blood supply, the inferior aspect of the flap should be elevated deep to the frontalis muscle and just above the periosteum. It should be noted that increasing the width of the pedicle does not necessarily improve perfusion of the flap.

An important theory used in nasal reconstruction is the aesthetic unit theory. Paramedian forehead flaps used in the reconstruction of nasal defects are indicated and best used for large defects of the nose (greater than 2 cm in width in the horizontal axis, nasal defects with exposed bone and cartilage that with insufficient periosteum or perichondrium respectively, and a previously irradiated face central face. The pedicle blood supply is an advantage of this flap.[8][9][10]

Due to the risk of flap necrosis, smoking is a relative contraindication.

Before surgery, measuring the defect and considering the length and width of the flap is of great importance. In particular, one must pay attention to the height of anterior hairline and forehead laxity. Flap preparation may be performed with a Doppler probe. In smokers, the supratrochlear artery should be traced up the entire forehead to ensure that a block in any segment of the artery is not present. The area of defect should be outlined on the normal/contralateral side of the nose to create an accurate 3-dimensional pattern that reflects the true tissue loss as edema in the actual wound may alter the true appearance. The patient’s face into the hairline is prepped with a surgical solution, usually betadine.

Local anesthesia with lidocaine 0.5% with 1:100,000 epinephrine is used alone or sometimes mixed with bupivacaine 0.25% in equal parts is prepared and injected deeply at the surgical site. The entire forehead and subcutaneous areas where the supratrochlear and supraorbital nerves are present are paid close attention to. In addition, the dorsum of the nose and base of the flap are injected. Margins of the nasal defect are made perpendicular with a scalpel.

Maintaining attachment to the frontalis muscle is useful when more bulk is required to full defects of considerable depth.

Using anatomical landmarks and the option of Doppler, the flap is designed over the supratrochlear vessels. A pattern is cut from a foil of suture pack to match the defect.  In patients with low anterior hairlines or those where the flap will be used in columellar reconstruction, the flap may be designed with a lateral curve to avoid utilization of hair-bearing skin. If the flap goes into the hair-bearing scalp, a subcutaneous level is often utilized in order to expose terminal hair bulbs for removal. As the flap approaches the eyebrow, undermining takes place within the subgalea approximately 3 cm above the orbital rim. Careful undermining with direct visualization should take place when going beyond the orbital rim as the supraorbital artery is at risk of transection in this location.  Once adequate coverage of the defect is determined, the nasal skin is undermined in the periphery of the defect and the flap is pivoted to the nose/nasal defect. Prior to suturing in place, the flap thickness should be evaluated and revised in order to fit the defect properly. Once properly revised, the flap is then sutured into place within the defect with proper eversion of the wounds. Abutting the nasal dorsum, the proximal aspect of the flap is not sutured until pedicle division at a later date.  Next the donor site of the forehead is closed with subperiosteal undermining and utilization of subcutaneous mattress sutures. The goal is decreased tension and avoiding forced donor site closure to prevent scaring and post-operative headache. If part of the wound is closed with secondary intention, scar revision may be necessary at a later date.

Further interventions should be deferred for several months to allow for the evolution of the scar, contraction, and maturity of the flap. Dermabrasion, contouring, and depilation have to be utilized at a later date.

Post-op bleeding may occur within the first 12 hours at the raw borders of the flap.  Cauterization of the borders controls this. Utilization of a full thickness skin graft (FTSG) from the supraclavicular fossa to the exposed borders of the pedicle helps control postoperative bleeding. Bovine collagen matrix (BCM) with petrolatum gauze may also be used to control bleeding of the exposed pedicle and fill any defects of the forehead that are healing by secondary intention.

A hematoma is the most common complication of a paramedian forehead flap. The development of small hematomas occurs under the distal portion of the flap during the initial transfer.

The paramedian forehead flap’s advantage is the superficial axial blood supply. This makes flap necrosis unlikely. However, it should be noted that dissection of flaps causes the release of oxygen free radicals, thromboxane A, and catecholamines from severed sympathetic nerves.  These three elements cause vasoconstriction and can enhance ischemia. However, noted in retrospective reviews of patients undergoing paramedian forehead flaps, only 1% developed partial thickness necrosis.

The paramedian flap is very versatile and is primarily utilized for facial reconstruction by the plastic surgeon. Primary care physicians and nurses who have patients with nasal and ocular defects should refer these patients to the plastic surgeon before embarking on any other therapy. The patient should have thorough education about the flap and should have realistic expectations. 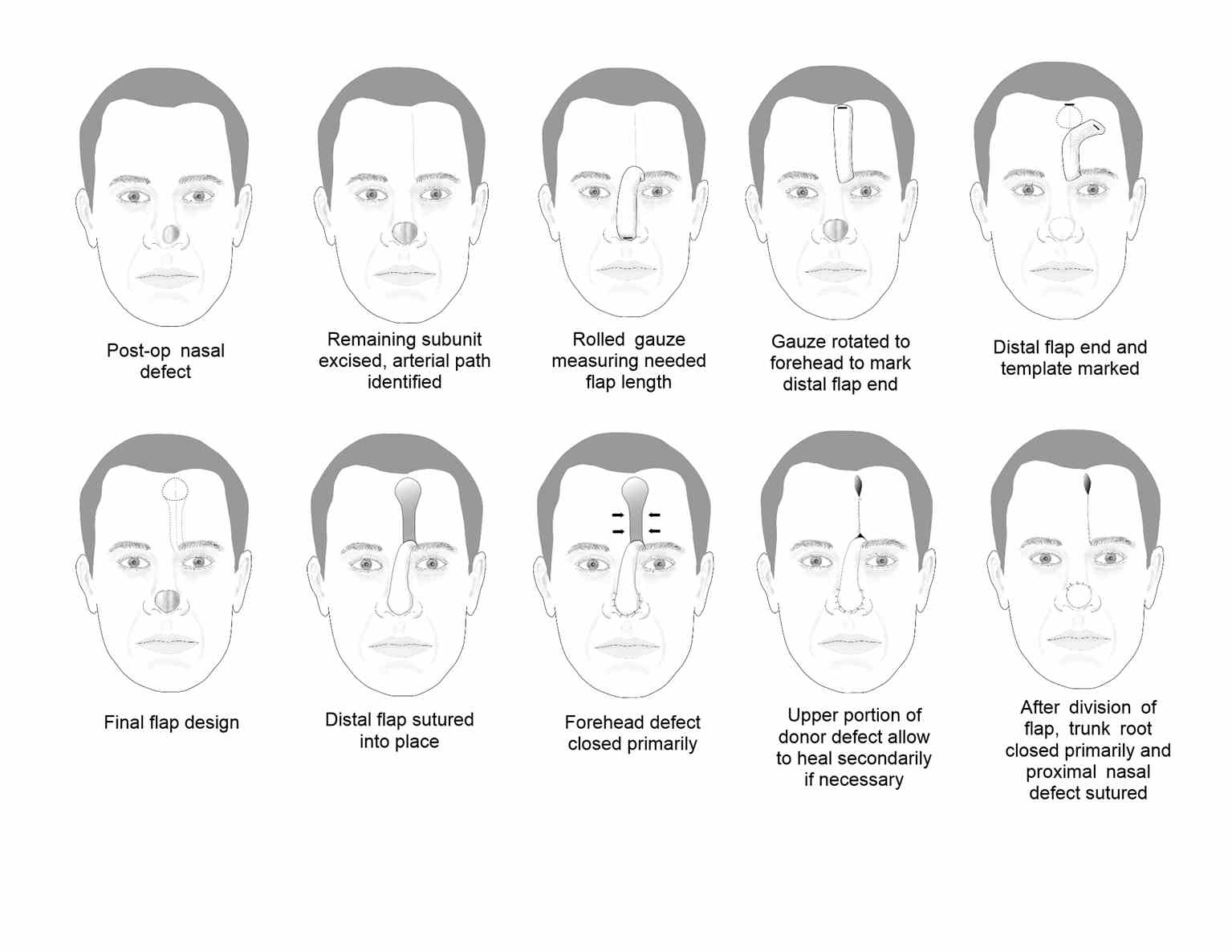 Krishnamurthy A, The Use of a Combined Local Flap for Reconstructing a Complex Nasal Defect. The Indian journal of surgery. 2018 Apr;     [PubMed PMID: 29915489]