Initially described in 1939 by Henri Mondor, Mondor disease classically describes a syndrome of sclerosing superficial thrombophlebitis of the veins of the anterior thoracic wall. The most commonly involved vessel is the superior epigastric vein producing a palpable cord in the inferior outer quadrant of the breast. Also known as Mondor cord, this rare clinical entity has also been reported as affecting the superficial penile veins. This activity reviews Mondor disease and stresses the importance of an interprofessional approach to care.

Initially described in 1939 by Henri Mondor, Mondor Disease classically describes a syndrome of sclerosing superficial thrombophlebitis of the veins of the anterior thoracic wall. The most commonly involved vessel is the superior epigastric vein producing a palpable cord in the inferior outer quadrant of the breast.[1] Also known as Mondor cord, this rare clinical entity has also been reported as affecting the superficial penile veins.[2] Fage is credited with first describing cording as a sign of superficial thrombophlebitis in 1870.

Mondor disease is a rare clinical entity with a poorly understood etiology. Many case reports have linked sclerosing superficial thrombophlebitis and the resulting palpable cord to local trauma, including repetition injury as a tight brassiere, strenuous exercise in the case of bodybuilders, or direct injury associated with surgery.[3] Other causes include direct damage to the veins, stagnation of blood, or extrinsic pressure on veins. Cases of Mondor disease have been reported after cosmetic mammoplasty, mastectomy, and breast-conserving surgery for breast cancer and after core needle biopsy.[4] Prior authors have highlighted an association between the Mondor cord as a sign of underlying breast pathology and recommend ruling out breast cancer through appropriate imaging before expectant management; however, no direct correlation has been proven.

Mondor disease can affect several different veinous drainage systems. However, it never involves the inner, upper portion of the breast. Symptoms may be found in the groin, abdomen, arm, or axilla. Axillary disease, also known as axillary web syndrome, has been well documented following axillary lymph node dissection and sentinel lymph node biopsy for breast cancer.[5] Penile Mondor disease has also been described; while its pathogenesis is incompletely understood, this rare entity involves near-painless cords on the dorsal aspect of the penis.[6]

There are less than 400 reported cases of Mondor disease in the medical literature.[7] This may be due to the generally self-limited nature of the condition. However, the potential link with underlying malignancy, hypercoagulable state, or systemic vasculitis warrants a greater vigilance on the part of providers when affected patients are encountered. Women are three times more likely to be affected than men. No racial or ethnic propensity has been reported. While cases have present in all ages, most are between 30 and 60 years old. A recent literature review by Amano et al. revealed 45% of cases to be idiopathic, 20% iatrogenic, 22% traumatic, and 5% about breast cancer.[1]

The pathophysiology of Mondor Disease is incompletely understood. Inciting factors such as direct trauma from tight clothing, surgery, or underlying system diseases such as breast cancer or hypercoagulable states have been described as causes for the resulting sclerosing thrombophlebitis of affected superficial veins. This process evokes an inflammatory response including pain, swelling, and redness at the site with a resultant fibrosed cord-like superficial vein visible and palpable. The process of re-cannulization can take between four and eight weeks, with most patients having a complete resolution of symptoms.[1]

A thorough history and physical is paramount to an accurate diagnosis. The account will vary slightly depending on the affected venous drainage basin: axillary, penile, or anterior chest wall. The history will, however, involve aspects consistent with Virchow's triad of stasis, hypercoagulability, and vessel wall damage. Patients will complain of a sudden onset of mild discomfort with a palpable cord in the affected area. Penile lesions may involve a history of excessive sexual activity, trauma, or abstinence.[8] Anterior chest lesions may include a history of recent mammoplasty, tight brassier, or another injury such as weight lifting or biopsy.[3] Axillary injuries may involve a history of recent oncologic surgery with either sentinel lymph node biopsy, axillary dissection, or core needle biopsy. When combined with physical findings of a palpable cord with scant overlying inflammation and no distal edema, Mondor disease should be strongly considered.

The diagnosis of Mondor disease is a clinical one confirmed by history and physical alone. With so few cases represented in the medical literature, there is no accepted consensus on evaluation or management. While some authors have suggested a link between underlying breast cancer and Mondor disease, others have denied this link and attribute the coexistence of disease to the direct or indirect trauma associated with the diagnosis and treatment of the underlying malignancy.[9] In patients with a classic story and no other systemic complaints and otherwise regular physical exam, it is reasonable to proceed without a laboratory, radiographic, or another invasive testing for diagnosis. In those patients with signs or symptoms suggestive of underlying pathology further evaluation with either mammography of the breast or ultrasound of the breast or penis is warranted.[8]

In cases where the clinical picture is not definitive, ultrasound is considered the first line in the imaging evaluation of Mondor disease. Ultrasound in the location of the patient’s area of palpable concern will show a non-compressible, hypoechoic tubular structure which is the superficial vein. An area of intraluminal thrombus may or may not be visible.[10] Color Doppler should be used to confirm the diagnosis by demonstrating the absence of flow within the vein.[11] Mammography may be inconclusive, or it may reveal a linear density in the breast in patients with superficial thrombophlebitis. MRI and other advanced imaging techniques are generally not indicated in the evaluation of Mondor disease.[12]

Supportive care and expectant management are sufficient in most cases of Mondor disease. Warm compresses, nonsteroidal anti-inflammatory medications, and abstinence from irritating clothing or activities are first-line therapy. Most lesions will resolve with cessation of discomfort and dissolution of the palpable cord.[13] Treatment with low molecular weight heparin or aspirin has been reported in some case series; this is not recommended in patients without an underlying hypercoagulable state inciting superficial thrombophlebitis and associated Mondor cord. Intralesional triamcinolone injections for a Mondor cord after breast augmentation have been successful in shortening the disease.[14]

The differential diagnosis of Mondor disease varies depending upon the location of symptoms. In general, such conditions as thrombophlebitis migrans, infectious mastitis, Buerger disease, Behçet disease, and polyarteritis nodosa should be entertained and ruled out. Other breast pathology, including mastitis and breast abscesses, will be accompanied by a patient complaining of significant pain with palpable fluctuance in the case of an abscess. Inflammatory breast cancer is known for its quickly progressive skin changes and ability to mimic worsening mastitis; as such, it must be considered in the evaluation of patients presenting with any breast complaint. Patients with inflammatory breast cancer will have progressive, worsening symptoms with skin changes, including erythema, breast enlargement, and pain.[15]

Mondor disease is usually a self-limited condition resolving in six to eight weeks. In cases where the situation is secondary to a hypercoagulable state, the prognosis is directly linked to the inciting condition.

Mondor disease is a self-limiting condition typically resolving in four to eight weeks. As with any thromboembolic disease, there is a small chance of the development of a deep venous thrombosis.

Patients should be counseled that Mondor disease is a self-limiting condition that leaves no permanent sequela. Patients should be educated on the need to follow up to ensure improvement and resolution of symptoms.

Mondor disease is a rare clinical entity affecting more women than men. Patients may develop lesions in sensitive areas such as the breast or penis. Some patients may be embarrassed or afraid to discuss their symptoms with a physician. Having a well-informed health care team with providers such as nurses, technicians, and physicians aware of rare clinical diseases is vital to identifying patients at risk for more sinister diagnoses. Some patients may be more comfortable sharing their symptoms with a different member of the interprofessional team, who in turn must relate the privileged information to the appropriate provider. 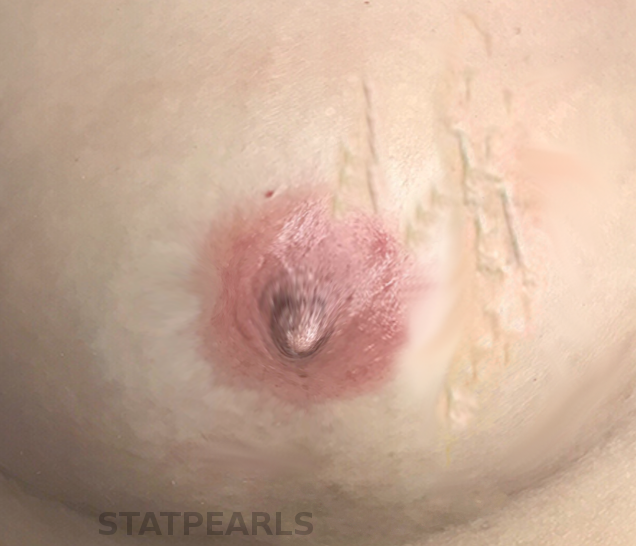 Nazir SS,Khan M, Thrombosis of the dorsal vein of the penis (Mondor's Disease): A case report and review of the literature. Indian journal of urology : IJU : journal of the Urological Society of India. 2010 Jul;     [PubMed PMID: 21116369]