By the completion of the fourth week of embryonic development, four limb buds arise from somites and mesenchyme of the lateral plate mesoderm that is covered by a layer of ectoderm.[1][2] Development of the upper extremities is propagated by a plethora of protein factors, with fibroblast growth factors (FGF) and Sonic hedgehog (Shh) playing vital roles. The gene expression and subsequent interactions of these various proteins contribute to the development of three spatial limb axes: proximodistal, anteroposterior, and dorsoventral.[1][2]

Development of the hand begins with flattening of the distal upper extremity buds around days 34-38 of embryonic development. Somites form the limb musculature while mesenchyme of the lateral plate mesoderm forms bone and cartilage. Somitic mesoderm of the hand divides into superficial and deep layers, with the superficial muscles developing earlier than deep muscles. The lumbrical muscles originate from the deep layer of this mesoderm, and by the twelfth week of development, tendons are fully developed and functional.[2]

Innervation of the first and second lumbricals is by the digital branches of the median nerve. The third and fourth lumbricals receive innervation from the deep branch of the ulnar nerve.

Distal insertions sites also show high variability in the lumbricals, with an increasedg variability from lateral to medial lumbricals. Such locations include the proximal phalanx, volar aspect of the metacarpophalangeal joint, the extensor hood, or any combination of these sites.[6] Additional insertions into the extensor hood are most common in the first lumbrical, and attachments to bone and the volar plate are most common in the fourth lumbrical.[6][7]

The use of lumbrical flaps has been described in cases of carpal tunnel syndrome and other median nerve injuries, such as neuromas in continuity.[7] One case study looked at a diabetic patient with a hand infection leading to exposure of the median nerve. Due to the acuity of inflammation, soft tissue reconstruction was not advised at this time. The authors subsequently used the first lumbrical to cover the exposed median nerve to avoid further damage.[7] This same study examined a patient that was surgically treated for carpal tunnel syndrome of her right hand. The patient presented to the authors after her pain persisted despite aggressive intervention. Upon re-exploration, the median nerve was found compressed within extensive scar tissue. The authors used the second lumbrical to cover the median nerve to buffer it from the overlying scar tissue with the continued resolution of symptoms 18 months after.[7]

Another study used intrinsic muscles of the hand as flaps for painful neuromas in continuity. In half of the patients, the authors used lumbrical flaps to cover the injured nerve after neurolysis, with all patients reporting relief of their pain.[8] While there was concern regarding a possible decrease in hand strength due to translocation of a lumbrical, the authors found no significant changes in strength or hand function as noted by the patients.[8]

While the lumbrical muscles have shown use in protecting the median nerve from further injury, several reports have shown that aberrant lumbrical anatomy can cause damage to the nerve.[3][9][10][11] If the lumbrical origin is too proximal, or even within the carpal tunnel at rest, then the median nerve is at higher risk of compression and subsequent injury.[9][10][11] Moreover, any lumbrical with anomalous origin can hypertrophy secondary to overuse, resulting in carpal tunnel syndrome.[12]

As previously discussed, the first two lumbricals are typically innervated by the median nerve. As such, any insult to the median nerve, including penetrating trauma, compression injury, brachial plexus injury, or infection may result in weakness or atrophy of the lateral two lumbricals. Additionally, any injury to the ulnar nerve can manifest as weakness or even atrophy of the medial lumbrical muscles. Entrapment of the ulnar nerve ranks asis the second most common compression neuropathy patients present with, and it is typically caused by nerve root impingement, brachial plexus compression, or nerve entrapment at the elbow, forearm, or wrist.[13] 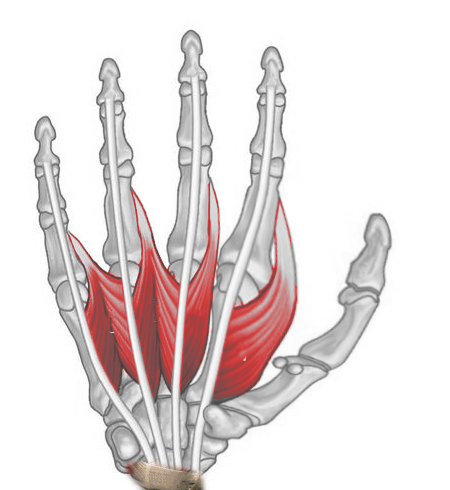