The liver is found inferior to the diaphragm and occupies the majority of the right upper quadrant (RUQ) of the abdomen. It is mostly intraperitoneal, spanning from the fifth intercostal space in the midclavicular line to the right costal margin. The superior posterior aspect of the liver contains a bare area where the diaphragm and inferior vena cava are found. The rest of the liver is covered by visceral peritoneum which meets the diaphragm at the border of the bare area forming the coronary ligament. The inferior liver is closely associated with the gallbladder and right kidney. Another ligament of mention is the Falciform ligament which splits the liver into anatomic left and right along the anterior aspect. The free-form edge of the falciform ligament contains the round ligament of the liver which is the remnant of the embryonic umbilical vein. Anatomically the liver has four lobes: right, left, caudate, and quadrate. The caudate lobe is demarcated medially by the ligamentum venosum, posteriorly by the inferior vena cava and anteriorly by the porta hepatis. The ligamentum venosum is the remnant of the embryonic ductus venosus. The quadrate lobe is anterior to the porta hepatis and lateral to the round ligament of the liver and is closely associated with the gallbladder. However, these anatomic lobes do not correlate to the boundaries of the eight functional sub-divisions of the liver which are divided according to the blood supply.[1][2][3]

The functional unit of the liver is the lobule. Liver lobules are collections of hepatocytes in a hexagonal shape with the center being a central vein. Within the lobules, the hepatocytes are arranged in cords, and in between the cords is a vascular space with a thin fenestrated endothelium and a discontinuous membrane called a sinusoid. These sinusoids contain Kupffer cells which are the resident macrophage of the liver and stellate cells which are hepatic lipocytes. At the vertices of the hexagon are a triad of a bile duct branch, a portal vein branch, and a hepatic artery branch referred to as a portal triad. Blood flows from the portal vein branch and hepatic artery branch across the lobule and finally into the central vein which is a branch of the hepatic vein. An alternative organization of hepatocytes places the line between 2 triads at the center of a rhomboid with the ends being central veins. This arrangement is called the portal acinus and is helpful in describing the functional zones of the liver. Zone 1 hepatocytes immediately surround the portal tracts and primarily are involved in oxidative energy metabolism. Zone 3 hepatocytes immediately surround the central veins and are the primary location for the biotransformation of drugs. Zone 2 hepatocytes lie in between zone 1 and 3 and have mixed functionality.

The liver protects the body from toxic substances absorbed from the gastrointestinal (GI) tract by processing and metabolism within the lobule. Phase-I reactions are catabolized by the cytochrome P-450 enzyme system while phase-II reactions conjugate substances with substrates such as glucuronide, glutathione, sulfate, among others.

The liver is the largest gland in the body and is ideally located to receive absorbed nutrients as well as detoxify absorbed drugs and other noxious substances. It serves as both an exocrine organ and an endocrine organ. The exocrine functionality of the liver is mainly in the synthesis and excretion of bile salts into the common hepatic duct as well as the conjugation of bilirubin and excretion into the gut. The endocrine functions of the liver include involvement in glycemic control via insulin and glucagon. The liver synthesizes important proteins such as fibrinogen, albumin, prothrombin, and other amino acids as well as modifies proteins into enzymes and peptide hormones. The liver participates in fatty acid metabolism and synthesizes lipoproteins, cholesterol, and phospholipids. Additionally, it is involved in the metabolism of carbohydrates including storing glycogen and gluconeogenesis. It also is involved in the metabolism of lactic acid and converts ammonia to urea. The liver stores vitamins, and minerals such as iron. In summary, the liver is an important mediator from the gut to the blood and plays a vital role in the metabolism of macronutrients, hormones, components of blood plasma, and exocrine and endocrine substances.

The liver, gallbladder, and biliary system arise from a ventral proliferation of endoderm that grows into mesoderm from the caudal part of the foregut. This outgrowth happens in the fourth week of embryonic growth and is called the hepatic diverticulum or liver bud. The endoderm of the liver bud differentiates into hepatocytes while mesoderm becomes a connective tissue and blood vessels. It is important to remember the liver has a hematopoietic role throughout the fetal period.

The liver receives a dual blood supply with 75% to 80% of the blood volume coming from the portal vein and 20% to 25% coming from the hepatic artery. The portal vein is formed from the superior mesenteric and splenic veins posterior to the neck of the pancreas. It is joined by the proper hepatic artery, a branch of the celiac trunk, and the common bile duct to form the portal triad which is enclosed in the hepatoduodenal ligament. Within the portal triad and associated branches, the bile is leaving the liver in the bile ducts while the portal vein and hepatic artery are delivering blood to the liver; this creates countercurrent flow which allows for the optimized exchange of electrolytes, bile acids, and other compounds.

Partial liver transplants can be made, primarily by harvesting the right lobe of the liver. Care must be taken to account for possible variations in the anatomy of the liver. Common variations include absent main-right portal vein (14.5%) and multiple bile duct abnormalities. Patients with portal vein abnormalities are highly likely to have multiple bile ducts (88.9%).[6]

Surgical treatment of portal hypertension secondary to liver damage or portal vein thrombosis is achieved using a trans-hepatic portosystemic shunt (TIPS) procedure. This procedure involves forming a connection between the portal vein, which brings blood into the liver, and the inferior vena cava, which drains blood out of the liver. This provides a method by which blood can bypass the damaged hepatic system to alleviate portal venous congestion.[7][8]

The liver can be involved in many pathologies so only a few of the most common conditions will be mentioned. When the exocrine function of the liver is impaired either by physical blockage of the bile ducts or hepatocyte damage or dysfunction of conjugation, bilirubin concentration raises in the blood. This manifests as a yellowing of the skin and sclera referred to jaundice and can be associated with itching, mental status changes, edema, and spider vessels.

The liver is highly vascular and is the main site for portocaval anastomosis. Patients with portal hypertension often exhibit signs of venous congestion at points of portocaval anastomoses. This can lead to esophageal varices, rectal hemorrhoids, and caput medusae.

Budd-Chiari syndrome is the blockage of hepatic venous drainage caused by thrombosis of one or more of the major hepatic veins. This condition should be considered in patients with hypercoagulable states that present with signs of portal hypertension, such as ascites, jaundice, or varices. Patients with right heart failure may also present with these signs due to back-up of blood through the inferior vena cava, but these patients are not considered to have Budd-Chiari syndrome. The diagnosis of Budd-Chiari syndrome is made with ultrasound and/or MRI.[9][10] 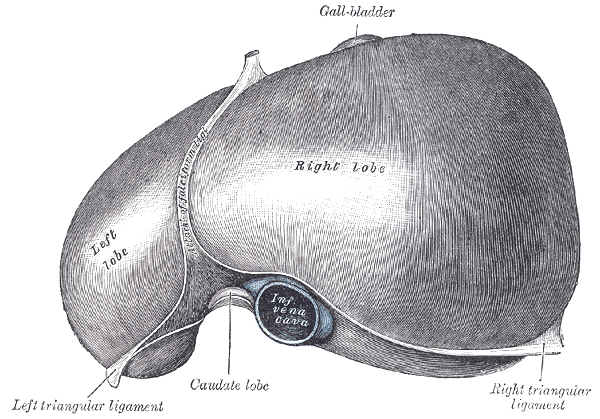 The Liver, The superior surface of the liver
Contributed by Gray's Anatomy Plates 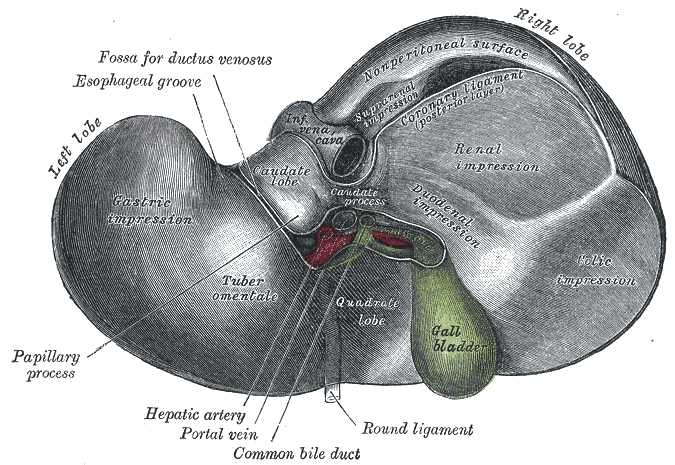 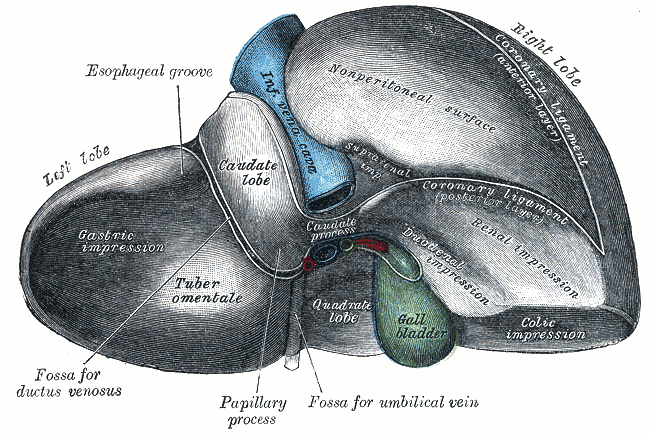 The liver, Posterior and inferior surfaces of the liver
Contributed by Gray's Anatomy Plates 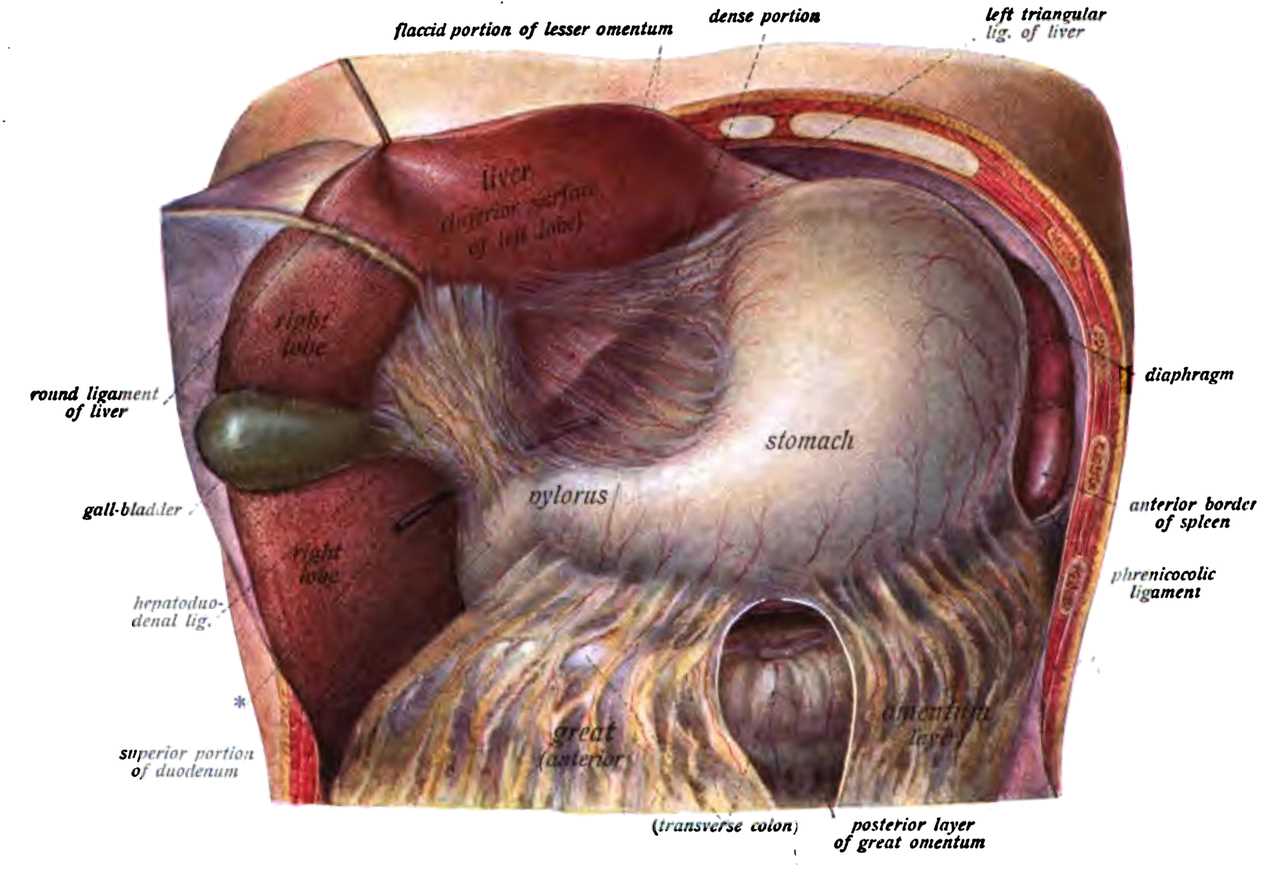 Ortale JR,Borges Keiralla LC, Anatomy of the portal branches and the hepatic veins in the caudate lobe of the liver. Surgical and radiologic anatomy : SRA. 2004 Oct;     [PubMed PMID: 15300411]