Laryngomalacia ranks as the most prevalent cause of stridor in an infant. It is crucial to make the diagnosis in early infancy as it may affect multiple aspects of growth and development. Stridor and noisy breathing are important symptoms to recognize as they may indicate varying degrees of respiratory compromise. Thorough upper airway evaluation is necessary for children suspected of laryngomalacia for accurate diagnosis and proper treatment of the condition and any underlying comorbidities. Successful management requires the coordination of multiple specialties. This activity reviews the diagnosis and management of laryngomalacia by an interprofessional team.

Laryngomalacia ranks as the most prevalent cause of infant stridor. It is important to make the diagnosis in early infancy as it may affect multiple aspects of growth and development. Stridor and noisy breathing are crucial symptoms to recognize as they may indicate varying degrees of respiratory compromise. Thorough upper airway evaluation is necessary for children suspected of laryngomalacia for accurate diagnosis and proper treatment of the condition and any underlying comorbidities. This activity presents a  general overview of the current diagnostic and management strategies for laryngomalacia in infants.

Multiple causal theories of laryngomalacia have been proposed. Neurologic dysfunction is one of the leading theories, suggesting that altered laryngeal tone occurs by abnormal integration of the laryngeal nerves.[1] This concept has support from a pathologic study showing increased supraglottic nerve diameter in patients with severe laryngomalacia.[2] Other theories, such as an imbalance of demand-supply upon inhalation in infants, require further study.[3] While researchers have not found reflux to be a causative factor for laryngomalacia, nearly 60% of infants have concomitant acid reflux disease.[4] Reflux is thought to cause irritation and edema of the upper airway, potentially worsening obstruction.

The incidence of laryngomalacia in the general population is relatively unknown but has been estimated to be anywhere from 1 in 2000 to 3000.[5][6] This figure may be an underestimation, as mild laryngomalacia is often clinically followed by pediatricians and never diagnosed endoscopically. While previous evidence has suggested a male predominance, recently published literature suggests that it is equally common in females. Black and Hispanic infants may be at an increased risk compared to White infants.[6] Low birth weight has also been suggested to be a correlating factor.[6]

A complete physical examination of the infant should occur, with particular attention paid to the oral cavity, nose, and neck. A full birth history is necessary, including any surgical procedures or intubations the patient has undergone. Parents should provide information about breathing difficulties noted in the home, focusing on noisy breathing or episodes of apnea. Noisy breathing that seems to worsen with feeding or while supine is suspicious for laryngomalacia. The clinician should explore feeding habits and note any weight loss or failure to thrive.

A physical examination focuses mainly on the head and neck. Choanal patency should be assured, and piriform aperture stenosis ruled out. A full evaluation of the oral cavity for cleft lip or cleft palate, glossoptosis, Pierre-Robin sequence, or micrognathia are all essential, as they may contribute to breathing and feeding difficulties. A careful examination of the neck to rule out masses or vascular lesions is also necessary. Special attention should be paid to hemangiomas in a beard-like distribution, as these infants are more likely to have hemangiomas present in the airway. Proper evaluation of the patient with suspected laryngomalacia requires an assessment of the supraglottic airway with flexible laryngoscopy in the awake infant. If the examiner notes severe symptoms (as stated previously), the physician should take the infant to the operating room for a diagnostic bronchoscopy.

Flexible fiberoptic laryngoscopy is the mainstay in the diagnostic evaluation of infant stridor. It allows for visualization of the upper aerodigestive tract during respiration. An adequate examination gives the practitioner a complete view of the oropharynx, supraglottis, glottis, subglottis, and hypopharynx. Infants with laryngomalacia are often found to have shortened aryepiglottic folds that tether the epiglottis posteriorly, an omega-shaped epiglottis, and/or redundant arytenoid tissue that prolapses over the glottis. Flexible fiberoptic laryngoscopy is currently the gold standard for diagnosis of laryngomalacia due to the convenience and ability to directly assess the dynamic collapse of the supraglottic airway during awake respiration.

Direct laryngoscopy and diagnostic bronchoscopy in the operating room give the practitioner a full evaluation of the upper aerodigestive tract to the level of the mainstem bronchi. This procedure is an essential modality in patients with severe symptoms or in patients where there is a concern for synchronous airway lesions in the same infant. Direct laryngoscopy also allows for surgical intervention should it be warranted.

Radiologic studies of the swallowing mechanism with a speech therapist may be warranted if there is a concern for aspiration or concomitant swallowing deficit in the child. A modified barium swallow study is preferred in infants with laryngomalacia as aspiration may be silent and not detected clinically.[7]

A polysomnogram is useful to quantify the presence and degree of obstructive sleep apnea occurring in a patient with laryngomalacia, especially in older children; this is sometimes described as sleep-exclusive laryngomalacia and has an incidence of approximately 4%.[8] Diagnosis is by drug-induced sleep endoscopy. These patients may benefit from surgical intervention with a supraglottoplasty to improve their AHI.[8]

Airway fluoroscopy is not recommended in the evaluation of infant stridor as It has been found to have low sensitivity and requires increased exposure to ionizing radiation.[9]

Treatment of the majority of patients with laryngomalacia is conservative. In cases of mild or moderate stridor without feeding difficulties, observation is recommended after making a diagnosis. It is important to monitor for appropriate weight gain and development of any severe symptoms outlined above.[10]  Positional feeding and thickening feed may help those infants with feeding difficulties.[10] Symptoms abate in the majority of patients by the age of 12 to 18 months without the need for surgical intervention.

Nearly 10 to 20% of infants with laryngomalacia will have severe symptoms. These patients often require surgical intervention.[11] A supraglottoplasty has become the initial treatment of choice for patients with severe symptoms. Multiple techniques for this procedure exist, including the use of a laser, cold steel, laryngeal microdebrider, or coblator. The most frequent reasons for surgical intervention are worsening airway symptoms and failure to thrive.[12] The supraglottoplasty procedure should be individualized to the particular patient’s anatomy but may consist of dividing shortened aryepiglottic folds, removing redundant arytenoid mucosa, performing an epiglottopexy, or a combination of these. Care should be taken to avoid the interarytenoid mucosa, as glottic stenosis can result from scarring of this area.

Supraglottoplasty has been shown to decrease the duration of symptoms of laryngomalacia significantly.[13] Patients generally tolerate the procedure well and are observed in the hospital postoperatively. Steroid administration during surgery and in the postoperative period to decrease airway inflammation is typically the recommended pharmaceutical therapy.[12]

A differential diagnosis for laryngomalacia should include the following etiologies of infant stridor including:

Unilateral vocal fold paralysis typically presents after a surgical procedure in the thoracic cavity or the neck. A hoarse cry is a common complaint. These infants may have difficulties feeding as well. When bilateral vocal fold paralysis is present, infants typically have biphasic stridor and may require a tracheostomy if there is significant respiratory distress. Flexible fiberoptic laryngoscopy is used to diagnose these conditions.

Laryngeal papillomatosis may cause a hoarse cry with upper airway obstruction, which may present early in infancy and diagnosis is by either flexible fiber-optic laryngoscopy or direct laryngoscopy.

Subglottic hemangiomas are a rare cause of stridor, which is typically expiratory. Hemangiomas in a beard like distribution are diagnostically suggestive. Confirmation is achievable with direct laryngoscopy and bronchoscopy.

Subglottic stenosis usually results from scarring of the subglottic region following intubation. Stridor may be heard but does not typically change with position.

Tracheomalacia and bronchomalacia may be present along with laryngomalacia. Expiratory airway sounds are generally present. Diagnosis is via bronchoscopy.

A vascular ring is a rare cause of airway obstruction. Feeding difficulties and stridor may be present — diagnostic confirmation is with a contrasted computed tomography scan of the chest. This condition should be a suspected diagnosis with tracheomalacia seen on bronchoscopy or compression of the esophagus seen on an esophagram.

Foreign body aspiration is a possibility after finding an infant in respiratory distress after being unaccompanied or after ingesting food, causing a choking or coughing event. Diagnosis is suggested with chest X-ray findings and decreased unilateral breath sounds. Bronchoscopy should be performed to diagnose and retrieve the foreign body.

While traditional thought says symptoms resolve in the majority of patients by the age of 12 to 18 months, a recent article suggested there is limited evidence from this and that the age range at resolution may be much wider.[14] Conservative management with feeding upright, antireflux therapy, and close observation of respiratory symptoms are generally all that is necessary for the majority of infants. The minority of patients who require surgical treatment with a supraglottoplasty have reliable outcomes, with some studies showing as high as 95% success rates.[15] Patients undergoing supraglottoplasty may require revision surgery for persistent symptoms; this is much more likely in patients under the age of 2 months at the time of the first operation; patients with neurologic comorbidities such as hypotonia, seizures, cerebral palsy; and in patients with cardiac comorbidities such as septal defects, aortic or pulmonary stenosis, or pulmonary hypertension. Neurologic comorbidities have the highest rate of revision surgery at nearly 70%, with 60% of patients requiring tracheostomy due to persistent airway obstruction.[16]

Aspiration after supraglottoplasty is rare and has not been significantly correlated with the procedure, regardless of the operative technique. Factors associated with aspiration following surgery are neurologic comorbidities, revision surgery, and age under 18 months at the time of surgery.[17][18]

Depending on the initial physical examination, patients with laryngomalacia may need evaluations by subspecialists in neurology, gastroenterology, cardiology, developmental pediatrics, genetics, and speech pathology.

Education on the symptoms of laryngomalacia is of the utmost importance for both parents and primary care providers. Resources for more information can be obtained at the Children's Hospital of Philadelphia website and as a handout from the American Thoracic Society.

Laryngomalacia is a diagnosis that is critical to make in infancy. A thorough history and physical examination may not completely suggest a diagnosis and referral to an otolaryngologist for flexible fiber-optic laryngoscopy is recommended practice. It is crucial that communication between the parents, pediatrician, and specialist continually take place, as each will provide valuable subjective and objective information. Because the majority of patients are observed clinically once diagnosed, history from multiple sources provides the clearest picture of the patient's clinical course. In patients with worsening or severe symptoms, prompt evaluation of the airway may lead to earlier treatment of airway obstruction. By communicating frequently and recognizing worsening clinical courses, a collaborative approach between all providers may improve outcomes and lead to the early diagnosis of more severe airway issues. [Level III]

Nurses in the neonatal unit, as well as parents at home, will often be the first to notice issues suggestive of laryngomalacia. Nursing must report these symptoms immediately to the attending. Specialists will regularly consult on such cases, and they can collaborate with both the neonatal nursing staff as well as the attending. Nurses may also be the first point of contact for parents with a newborn as they come in for vaccinations or other post-natal appointments. It is crucial that the nurses play a part in the assessment of the baby and assist in obtaining all patient history for the infant so that they can alert the clinicians regarding any abnormalities so diagnostic procedures can take place if necessary. The entire interprofessional team must communicate and collaborate to lead these cases to their optimal outcome. [Level 5] 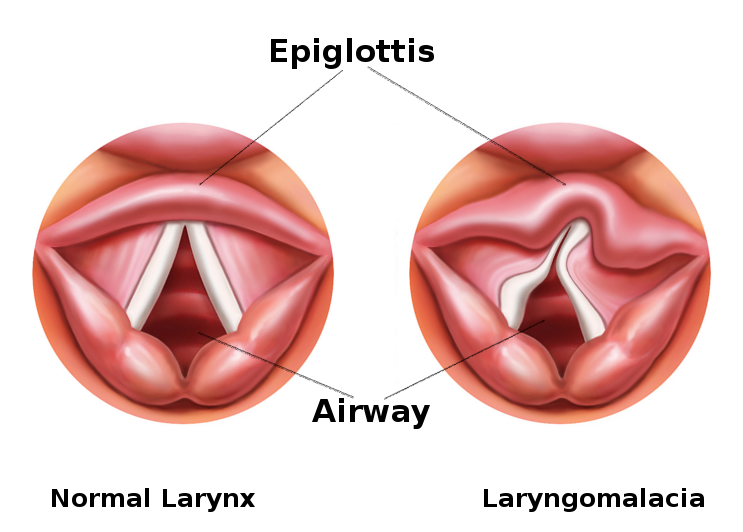 Huntley C,Carr MM, Evaluation of the effectiveness of airway fluoroscopy in diagnosing patients with laryngomalacia. The Laryngoscope. 2010 Jul;     [PubMed PMID: 20578105]