Influenza is a communicable viral disease that affects the upper respiratory tract, including upper and lower respiratory passages. A wide spectrum of influenza viruses causes it. Some of these viruses can infect humans, and some are specific to different species. This activity reviews the pathophysiology of influenza and highlights the role of the interprofessional team in its prevention and treatment.

Influenza is a communicable viral disease that affects the upper and lower respiratory tract. A wide spectrum of influenza viruses causes it. Some of these viruses can infect humans, and some are specific to different species. These viruses are transmissible through respiratory droplets expelled from the mouth and respiratory system during coughing, talking, and sneezing. The influenza viruses can be transmitted by touching inanimate objects soiled with the virus and touching the nose or eye. Influenza can be transmitted before the patient is symptomatic and until 5 to 7 days after infection. After infection, it takes a few days for most of the healthy patients to recover fully, but complications that include pneumonia and death are common in certain high-risk groups. These groups include young children, the elderly, immunocompromised, and pregnant females. Symptoms of influenza include a runny nose, high fever, cough, and sore throat. Influenza spreads rapidly and efficiently in seasonal epidemics. Flu epidemics occur every autumn and winter in temperate regions and affect a significant portion of adults and children, but seasons differently impact age groups and severity.[1][2][3][4]

Over the past few decades, more lethal strains of the influenza virus have evolved. Besides infecting humans, these viruses also infect animals. Clinicians should be aware that all rapid tests for detecting influenza have limited sensitivity, and false-negative results are common. The gold standard for diagnosis is the PCR test or viral culture of throat secretions, but these tests take a few days to yield results. The key strategy in reducing the morbidity of the infection is vaccination.

There are four types of influenza viruses, A, B, C, and D. Influenza types A and B cause human infection annually during the epidemic season. Influenza A has several subtypes according to the combination of hemagglutinin (H) and the neuraminidase (N) proteins that are expressed on the surface of the viruses. There are 18 different hemagglutinin subtypes and 11 different neuraminidase subtypes (H1-18 and N1-11). Influenza A viruses can be characterized by the H and N types such as H1N1 and H3N2. Influenza B viruses are classified into lineages and strains. Influenza B viruses that have circulated in recent influenza seasons belong to one of two lineages, influenza B Yamagata and influenza B Victoria. Influenza viruses have receptors responsible for making them species-specific.

Researchers isolated Influenza A in 1933, seven years later, they isolated Influenza B. Influenza viruses in certain geographic regions of the northern and southern hemispheres are called an influenza epidemic which occurs every year during the winter seasons. The severity, length of influenza, and age groups that are highly impacted, and complication rates such as hospitalizations and deaths differ significantly during different influenza seasons. When H3N2 viruses predominate, the season tends to be more severe, especially among children and the elderly. World Health Organization (WHO) conducts global influenza virologic surveillance that indicates influenza viruses are isolated every month from humans in a geographic region. In temperate regions, influenza activity peaks during the winter months. In the Northern Hemisphere, influenza outbreaks and epidemics typically occur between October and March, whereas in the Southern Hemisphere, influenza activity occurs between April and August. In the tropical belt, influenza circulates year-round.

Influenza is an acute disease that targets the upper respiratory tract and causes inflammation of the upper respiratory tree and trachea. The acute symptoms persist for seven to ten days, and the disease is self-limited in most healthy individuals. The immune reaction to the viral infection and the interferon response are responsible for the viral syndrome that includes high fever, coryza, and body aches. High-risk groups who have chronic lung diseases, cardiac disease, and pregnancy are more prone to severe complications such as primary viral pneumonia, secondary bacterial pneumonia, hemorrhagic bronchitis, and death. These severe complications can develop in as little as 48 hours from the beginning of symptoms. The virus replicates in the upper and lower respiratory passages starting from the time of inoculation and peaking after 48 hours, on average.

For virulence, both neuraminidase and hemagglutinin are vital as they are the key targets by the neutralizing antibodies. Hemagglutinin adheres to the epithelial cells in the respiratory tract allowing for the progression of the infection. Neuraminidase cleaves the bond that holds the virus together and helps to spread the virions. Their H and N proteins identify influenza viruses.

An important aspect of influenza A virus is that it is a genetically labile virus with a high rate of mutations. This results in major changes in antigenic and functional proteins.

Influenza viruses replicate in the epithelial cell lining of the upper and lower respiratory tracts. The pathology does not differ between natural or experimental infection. The definitive diagnosis of influenza needs serologic, immunologic, and molecular testing through RT-PCR for upper or lower respiratory tract specimens. Mild cases show pathological changes in the respiratory tracts, but severe cases show clear evidence of pathologic changes of pneumonia. The tracheobronchial changes due to influenza infection can be summarized as redness and inflammation with mucous and purulent discharge macroscopically, and desquamation and destruction of the pseudostratified epithelium of the trachea and bronchi with only the basal layer remained viable but inflamed microscopically.

The clinical presentation of influenza ranges between mild to severe depending on the age, comorbidities, vaccination status, and natural immunity to the virus. Usually, patients who received the seasonal vaccine present with milder symptoms, and they are less likely to develop complications.

Signs and symptoms of influenza in mild cases include a cough, fever, sore throat, myalgia, headache, runny nose, and congested eyes. A frontal or retro-orbital headache is a common presentation with selected ocular symptoms that include photophobia and pain with different qualities. The cause of ocular pain is related to the viral tropism that is associated with certain types and subtypes. Severe cases may progress to shortness of breath, tachycardia, hypotension, and need for supportive respiratory interventions in as little as 48 hours.

Diagnosis of influenza can be reached clinically, especially during the influenza season. Most cases will recover without medical treatment, and they would not need a laboratory test for the diagnosis. In high-risk patients, initiation of treatment should not be delayed until test results are obtained. Influenza laboratory tests should be ordered for cases where testing would inform clinical action or public health interventions, such as outbreak situations where the diagnosis of the causative agent is necessary for therapeutic and prophylactic recommendations.

Rapid antigen results are available within 15 minutes and have high specificity. However, sensitivity is only low to moderate.

Viral culture has a moderately high sensitivity and the highest specificity of all available testing. However, results can take several days. Therefore, it is not helpful for the rapid diagnosis and management of influenza.

A chest x-ray should be obtained in patients with pulmonary symptoms to exclude bacterial pneumonia.

Influenza infection is self-limited and mild in most healthy individuals who do not have other comorbidities. No antiviral treatment is needed during mild infections in healthy individuals. Antiviral medications can be used to treat or prevent influenza infection, especially during outbreaks in healthcare settings such as hospitals and residential institutions. Oseltamivir, zanamivir, and peramivir belong to the neuraminidase inhibitors family and can be used for the treatment of influenza A and B. The adamantanes antiviral family has two medications, amantadine, and rimantadine. Amantadine and rimantadine are effective against influenza A, but not influenza B. During recent influenza seasons, high rates of resistance have been identified in influenza A for the adamantanes antivirals, and they are not recommended for treatment or prophylaxis against influenza A. Resistance to the neuraminidase inhibitors has been low in recent influenza seasons, but the virus may mutate and develop resistance at any time. Resistance can develop in some patients following treatment, especially in immunocompromised patients. Oseltamivir can be used for chemoprophylaxis for individuals one year and older in cases of outbreaks and exposure in high-risk groups. The side effects of oseltamivir include skin reactions that might be severe and sporadic transient neuropsychiatric events; these side effects form a barrier to the use of oseltamivir in the elderly and individuals that are at higher risk of developing these side effects. The only contraindication to zanamivir is an allergy to eggs.[6][7][8][9]

Vaccination is highly recommended at the start of the winter season. The flu vaccine recommendations include:

Influenza has enormous morbidity. Many individuals have to take time off work and school. Further, in children and seniors, the infection can lead to death. Mortality rates are higher in people with pre-existing lung disease and diabetes. Overall, the condition can seriously limit the quality of life for 1-2 weeks each season.

The prevention and treatment of influenza are best done with an interprofessional team that includes a nurse, nurse practitioner, primary care provider, internist, pharmacist, an emergency department physician, and an infectious disease specialist.

Each year, the flu affects millions of people and lead to time off work and school. The symptoms seriously affect the quality of life, and at extremes of age, the infection is known to cause death,

The key is patient education about vaccination. All patients should be encouraged to get the annual flu vaccine that is available in November of each year. Almost every school has a visiting nurse team that offers vaccination to students. In addition, pharmacists have now been given the authority to offer vaccinations to people who walk into the pharmacy. The key is to reduce the costs of healthcare as a result of people rushing to the emergency departments during winter. At the same time, patients are educated about hand washing, avoiding close contact until the symptoms subside, and drinking ample fluids. In addition, in most communities, there are surveillance programs run by epidemiologists to detect any epidemics. Only through such an interprofessional approach can the morbidity and mortality of the flu be lowered.

While the flu vaccine is not 100% effective, it can lower the intensity and duration of symptoms in most people. Individuals who have lung disease, diabetes, chronic illnesses, the elderly, and children should get the flu vaccine as it can prevent admission to the hospital. Every year, hundreds of individuals are admitted to the hospital, and tragically some do die from the flu.[10] (Level 5) 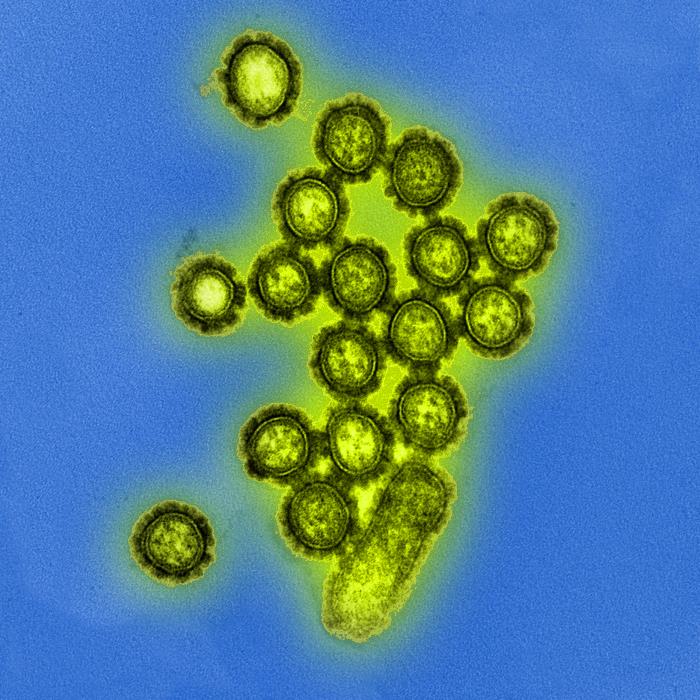