Knee pain has been reported to limit mobility and impair quality of life in 25% of adults.[1] Iliotibial band syndrome (ITBS) is one of the many different causes of lateral knee pain. It was first seen in US Marine Corps recruits during their training in 1975 and has been diagnosed frequently in long-distance runners, cyclists, skiers, and participants of hockey, basketball, and soccer since then. These activities all depend on rapid and prolonged cycling of the knee through flexion and extension. This article will discuss how this cycling can cause the syndrome, as well as, discuss evaluation and treatment modalities.

The iliotibial band (ITB) is the distal fascial continuation of the tensor fascia lata, gluteus medius, and gluteal maximus. It traverses superficial to the vastus lateralis and inserts on the Gerdy tubercle of the lateral tibial plateau and partially to the supracondylar ridge of the lateral femur.[2] There is also an anterior extension called the iliopatella band that connects the lateral patella and prevents medial translation of the patella. The ITB functions as a knee extensor when the knee is less than 30 degrees of flexion but becomes a knee flexor after exceeding 30 degrees of flexion. The ITB has been postulated to acquire a more posterior position relative to the lateral femoral epicondyle with increasing degrees of flexion.[3]

The etiology of ITBS is controversial and likely multifactorial. One theory advocates that repetitive friction of the ITB and the lateral epicondyle during flexion and extension lead to inflammation of the contact area of the ITB. Contact between the ITB and lateral epicondyle occurs at 30 of flexion, which is the degree of knee flexion at foot strike.[4] This contact area has the name of the "impingement zone." However, anatomical studies have not supported this gliding motion across the lateral epicondyle. Histologic examinations of cadaveric specimens show a highly innervated fat pad that is deep to the distal ITB. Compression of this fat pad is implicated to be the source of the lateral knee pain.[5] Furthermore, another theory includes chronic inflammation of a fluid-filled ITB bursa located between the ITB and lateral epicondyle. It is not clear at this time if one theory is most causative of the syndrome or if it is multifactorial.

Modifiable risk factors include running on a tilted surface, hill running, errors in training technique, and abrupt changes in training intensity. Anatomical factors such as internal tibial torsion, hip abductor weakness, excessive foot pronation, and medial compartment arthritis leading to genu varum can increase the tension of the ITB and can perpetuate the pathology.[6] ITBS correlates with greater trochanteric pain syndrome because of the altered biomechanics of the hip and tension of the proximal fascial complex. Also, the patellofemoral syndrome is commonly seen in these patients because of the tension through the iliopatellar band.

ITBS is the most common etiology of lateral knee pain in runners and cyclists but may also present in athletes participating in tennis, soccer, skiing, and weight lifting. The incidence ranges from 1.6% to 12% in runners and other repetitive motion athletes.[3] It is slightly more common in women than men and seldom occurs in the non-active population. One cross-sectional study demonstrated that the incidence of ITBS was 6.2% in military recruits.[7] The U.S. Marine Corps reported running/overuse injuries accounted for 12% of injuries sustained by their personnel.[8]

Iliotibial band syndrome is a clinical diagnosis and rarely requires further studies and imaging. The clinician must be vigilant about mechanical symptoms, changes in activity level, mileage of long-distance activity, and condition of training shoes. The patient often presents with lateral knee pain localized to the area between the Gerdy tubercle and the lateral epicondyle. The history is commonly consistent with a recent change in prolonged aerobic activities and rarely in the setting of an acute injury. The pain initially will occur at the completion of the activity but may be present at the beginning of the activity and even at rest with later disease progression. Furthermore, the pain is often worse with running on a cambered surface, and also hills or longer strides may increase symptoms as deeper knee flexion at foot strike and leads to more time in the "impingement zone."[3]

The first step is a physical examination of the knee. Coronal and sagittal plane knee misalignments such as genu varum, genu valgum, recurvatum, and procurvatum are worth noting as this can increase tension on the ITB. Knee effusion or ligamentous laxities are not commonly part of the presentation with isolated ITBS. Palpation of the distal ITB can be painful, and the clinician may feel crepitus with range of motion. Special tests for ITBS include the Noble and Ober tests. To perform the Noble test, the clinician first palpates the lateral femoral epicondyle and then extends the knee from 90 degrees of flexion to 0 degrees of extension. Reproducible pain at 30 of flexion is a positive test. The Ober test involves placing the patient in the lateral recumbent position with the knees flexed to 90. The clinician stands behind the patient and abducts and extends the affected hip while supporting the knee. A positive test is indicated by restriction and pain to the lateral knee while the clinician adducts the hip in this extended position.[9]

Radiographic imaging of the knee is useful for ruling out other pathology that could be causing lateral knee pain such as osteoarthritis, fracture, or patella malalignment. ITBS in the absence of other pathology will appear normal on plain radiograph of the knee. If the diagnosis is still unclear after the history and physical, magnetic resonance imaging (MRI) of the knee may confirm the diagnosis if it demonstrates hyperintensities at the lateral epicondyle with a thickened distal ITB. Additionally, ultrasound is a low cost and low-risk modality that may show abnormal distal ITB thickening.[3]

The first-line treatment for the vast majority of patients with ITBS is nonoperative management. The patient should be advised to refrain from the inciting activity until the pain has resolved. Intermittent cryotherapy can help with acute flares. A gradual return to activity can commence as soon as the patient is pain-free with activity and palpation. Physical therapy focused on stretching of the ITB and abduction strengthening can be very effective at lengthening the ITB and reducing tension. Furthermore, manual therapy such as myofascial release with a foam roller has been used to break up adhesions and is an integral part of the rehabilitation process.[3] The physical therapist should also focus on teaching proper ergonomics and posture while performing inciting activities.

Non-steroidal anti-inflammatories can help with diminishing the inflammation. Likewise, corticosteroid injections can be therapeutic, as well as diagnostic for ITBS by providing immediate and prolonged pain relief.[10] Shoe modification, foot orthosis, and sport-specific technique training can help prevent ITBS from returning in some cases. Most patients will have complete symptom relief and able to return to activity within 6 to 8 weeks with nonoperative management alone.

The recommended progression back to activity starts with a week of running on alternating days on a flat surface. The following weeks are focused on fast-paced running daily and avoid downhill running. After 3 to 4 weeks, the patient can gradually increase the distance and frequency. Introducing hills and cambered surfaces should only take place if there is no pain or symptoms on a flat surface. If the patient relapses, then they will need to start their activity progression over again and may require a period of rest beforehand.

Surgical intervention is only for refractory cases despite nonoperative management for more than 6 months. There are several surgical options including percutaneous or open ITB release, ITB lengthening with a Z-plasty, open ITB bursectomy, and arthroscopic ITB debridement. Furthermore, there are several different techniques described for the open ITB release including resecting a triangular portion of the distal posterior ITB band, resecting the 2 cm x 4 cm portion overlying the lateral femoral epicondyle, and also making a V-shaped incision in the ITB.[9][11][12] All of the different techniques have demonstrated success, but there are limited comparative studies to demonstrate superiority. ITB bursectomy is the indicated option with the symptomatology of ITBS but no enhancement of the ITB on MRI. The procedure consists of excising the underlying ITB bursa but leaving the ITB completely intact. One study demonstrated that the majority of patients who undergo open bursectomy are overall completely or mostly satisfied with the results.[13] Minimal invasive techniques have been described to resect the lateral synovial recess that connects the ITB to the lateral femur and innervated synovial fat. Michels et al. described this arthroscopic technique and showed a 97% good to excellent result with all patients returned to full activity.[14]

The following lists the most common causes of lateral knee pain:

Roughly 50% to 90% of patients will improve with 4 to 8 weeks of non-operative modalities. Likewise, all surgical modalities have reported good to excellent results.[9][12] ITBS typically follows a fluctuating course and may relapse at any point in the treatment progression or return to activity.

Patient education and adherence to the treatment plan is the key to treating this disorder. Running at faster paces and on a flat ground have been shown to limit the time in the so-called "impingement zone” between the lateral femoral epicondyle and ITB. Furthermore, patients must change their shoes regularly to prevent uneven wear of the soles.[3] Patients may also benefit from a personal trainer or physical therapist to improve their sport-specific biomechanics. It is crucial that the patient is aware that the ITBS can sometimes relapse after returning to activities, and they should restart the nonoperative treatment progression.

Successful treatment of ITBS is only possible through an interprofessional approach. Patients with ITBS often present initially to their primary care clinician and nonoperative treatment can be started at that time before seeing an orthopedic surgeon. Physical therapy is imperative to strengthening the abductors, loosening the ITB tension, and teaching proper biomechanics during the activity. The sport-specific trainers must also be knowledgeable on how to prevent or minimize activities that are at high risk for developing this syndrome. Open communication with the patient, physical therapist, and treating clinician is imperative to limit progression or relapse of the disease. 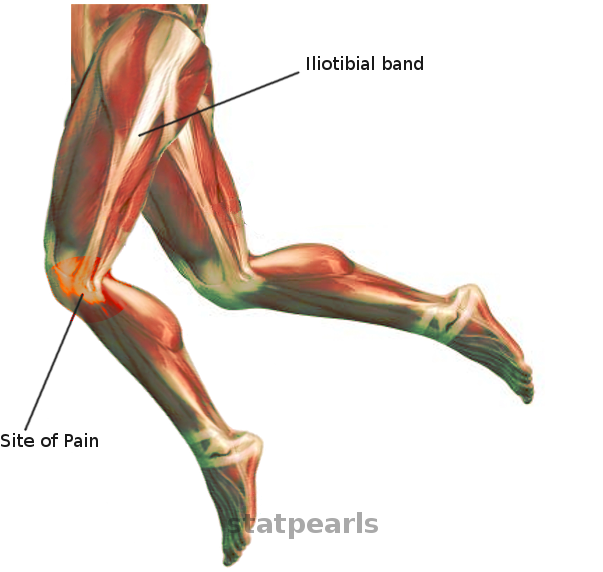