Use coupon code EXTENDEDHOLIDAY2020 at checkout for 20% off

Idiopathic guttate hypomelanosis (IGH) is a benign, typically asymptomatic, leukodermic dermatosis of unclear etiology that is classically seen in elderly, fair-skinned individuals, and often goes unrecognized or undiagnosed. [1] Occasionally, IGH is aesthetically displeasing. However, it is not a dangerous process. Once present, lesions do not remit. Treatment is aimed at improving the cosmesis of lesions.

The etiology of IGH remains unknown. Several hypotheses exist, including the notion that this is a manifestation of the skin's normal aging process, occurs secondary to cumulative chronic sun exposure, or occurs as a result of repeated microtrauma to the skin. [2] None of these hypotheses have been verified.

IGH occurs in all races and skin types. It is thought to occur more frequently in fair-skinned individuals. However, it can occur in darker skin types and is more noticeable in these patients. Despite the previous conception that it occurs more commonly in females, recent studies show equal male and female prevalence.[2] One possibility for this discrepancy is a heightened perception of cosmetic problems by women versus men. Regardless of gender, the prevalence and incidence increase with age. Up to 80% of people over the age of 70 years are noted to have IGH. However, a recent study noted up to 87% of patients aged 40 and older had at least one lesion. In addition, IGH may present in young adults in the 20s and 30s.[2]

The pathogenesis of IGH seems to be complex and multifactorial and likely involving both genetic and environmental factors, given the extremely high overall incidence.

Many studies have advocated the central role of sun exposure, although a definite causal relationship has not been statistically proven. Interestingly, lesions are uncommon on face and neck (which are typical sites for other actinic processes), suggesting multifactorial pathophysiology.

Small studies have noted a higher prevalence of these lesions in the family of patients with IGH compared with controls, implying at least partial hereditary component to pathogenesis. A recent study helped confirm this theory, which noted that within a subset of renal transplant patients, there was there is a statistically significant increase in the incidence of IGH with the HLA-DQ3 haplotype, and a negative association in patients with the HLA-DR8 haplotype. [3]

Histopathologic correlation to elucidate possible underlying mechanisms of the disease has also been inconsistent as well. Some studies note the reduction in the total number of melanocytes as the underlying driving factor, while others suggest structural abnormalities, such as fewer melanosomes, decreased dendrites, decreased tyrosinase activity, or even defective keratinocyte uptake rather than a melanocytic process. [4]

As the diagnosis can usually be made on history and physical exam alone, lesions of IGH typically do not need to be examined with histopathology. If a biopsy is requested or necessarily sampled, pathology lesions classically present with a decrease in the total number of DOPA-positive epidermal melanocytes within the basal layer of the epidermis, although not completely absent as in vitiligo. Furthermore, there is an overall decrease in melanin pigmentation. This is best noted when compared with adjacent "normal" epidermis, as isolated lesions without neighboring normal tissue for comparison may be difficult to distinguish. Additional features include flattening of rete ridges with or without atrophy of the epidermis. Epidermal atrophy is more frequently found in non-sun-exposed areas. There may be orthokeratosis ("basket-weave" hyperkeratosis) or compact orthokeratosis of the overlying stratum corneum. [4]

IGH presents with multiple small, scattered, discrete, round or oval-shaped achromic or hypochromic macules which are classically 2 to 6 mm in size and develop slowly over the years. Occasionally, there is an admixture of larger lesions up to 2.5 cm. Lesions are typically smooth, though scaly and even hyperkeratotic variants have been reported. Lesions do not assume regular pattern or grouping and do not change in size or regress once present. Adnexal structures such as hair follicles do not seem to be affected; hairs within the lesions usually retain their pigment. These lesions occur most commonly on sun-exposed areas, such as the dorsal upper and lower extremities, and they favor distal sites over proximal sites. However, sun-protected areas, including the trunk, and rarely the face, can also be affected.

Given the benign course of IGH, no laboratory, radiographic, or other tests are typically necessary to investigate these patients.

Dermoscopy can be a valuable tool in the evaluation of lesions of IGH. Dermoscopy findings. Listed in order of incidence, IGH can assume varying morphologies:

The nebulous pattern is noted more often in early lesions compared with ameboid, feathery, and petaloid patterns, which are noted in older lesions.

Patients should be reassured that lesions of IGH are benign and no treatment necessary. There are no universally accepted efficacious treatments for this condition.

In general, as sunlight is most likely a contributing or potentially even precipitating factor, the use of sunscreens and physical barriers should be recommended for all patients.

In addition to photoprotection, treatment for cosmetic purposes are available and have shown variable promise alone or in combination. These include cryotherapy, superficial abrasion, topical steroids, topical retinoids, topical calcineurin inhibitors, dermabrasion, topical 88% phenol, fractional carbon dioxide lasers, non-ablative fractional photothermolysis via fractional 1550-nm ytterbium/erbium fiber laser, and excimer light treatment. Patients should be counseled on the risk of worsening leukoderma with cryotherapy and of long-standing (although, not permanent) erythema and postinflammatory hyperpigmentation with treatments such as fractional carbon dioxide lasers. Promising studies have postulated that combination fractional photothermolysis and topical use of calcineurin inhibitors may improve outcomes. More recently, studies have noted an increase in melanocytes with combination microneedling with microinfusion of 5-fluorouracil via tattoo machine, which may be a promising treatment option.

Differential diagnosis of guttate leukoderma is broad. Similar lesions may be seen in the setting of various generalized dyschromatoses. It is crucial to distinguish IGH lesions from vitiligo early in the disease course because, in contrast to vitiligo, lesions of IGH do not progress. Other common dermatologic conditions in the differential diagnosis include pityriasis versicolor, pityriasis alba, café au lait macules, lichen sclerosis, guttate morphea, and simple post-inflammatory hypopigmentation. Each of which has a distinct typical distribution and associated findings, which are fairly characteristic. Some of the less commonly thought of lesions which are important to distinguish include achromic verruca plana, pityriasis lichenoides chronica, disseminated hypopigmented keratoses that follow psoralen and ultraviolet A (PUVA) therapy, clear cell papulosis, and atrophie blanche.

Achromic verruca plana lesions will be more susceptible to koebnerization, and histologically would expect to see koilocytes. Clinically, lesions of pityriasis lichenoides chronica are more widespread with overlying scale. Disseminated hypopigmented keratoses occur following PUVA therapy with well-demarcated, small, hypopigmented, flat-topped papules occurring on the trunk and extremities in a uniform distribution. Histologically note variable acanthosis, hyperorthokeratosis or parakeratosis, and papillomatosis, and a normal amount of melanin and melanocytes. Clear cell papulosis is a rare condition that occurs in young children more typically on face and trunk, at times noted to occur along "milk lines." Lesions present as multiple hypopigmented, barely elevated, small flat-topped papules and macules. Histologically, these lesions are characterized by large clear cells in the basal layer that have a pattern of immunohistochemical staining similar to Toker's clear cells of the nipple and extramammary Paget disease. Both IGH and atrophie blanch favor the distal dorsal extremities, such as dorsal shins. However, lesions of atrophie blanche tend to occur in the site of a previous ulcer with more angulated margins and tend to be more porcelain white, depressed atrophic scars with a surrounding rim of telangiectasia.

IGH is a benign condition with an excellent prognosis; however, once present, lesions do not remit without treatment. As such, they primarily represent a cosmetic concern. IGH may be an indication of cumulative sun exposure. However, no direct correlation has been made to date.

It is important to recognize idiopathic guttate hypomelanosis to avoid unnecessary treatments. The interprofessional team consists of primary care providers, dermatologists, and specialty trained nurses. If there is doubt about the diagnosis, patients should be referred to dermatology. Dermatology nurses can assist with patient education. [Level 5] 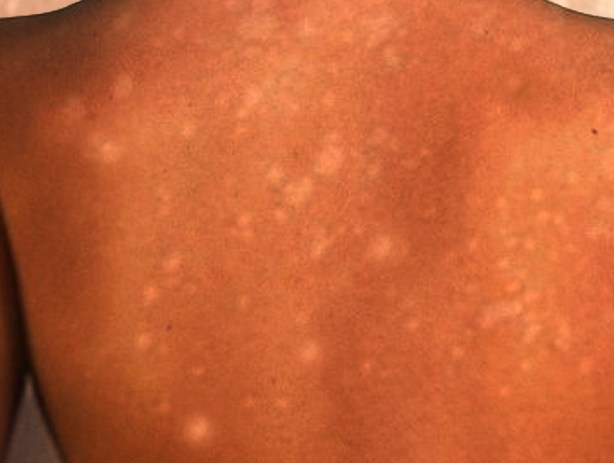