A hip pointer is a contusion of the iliac crest and/or the greater trochanteric region of the femur following a direct impact or collision.[1]  The management of these injuries requires coordinated care between athletic trainers, clinical providers, and primary care and sports medicine specialists.  The majority of these injuries improve with standard, first-line nonoperative management modalities.

The anterior iliac crest region and greater trochanter of the femur have, in most patients, minimal overlying fatty tissue. Thus these areas are more susceptible to injury from direct trauma.

The primary etiology is a direct blow to the iliac crest or greater trochanter during contact sports. American football and hockey are the most common sports that result in these injuries.[2] The former implicates tackling and incidental collisions that regularly occur during competition. The same underlying mechanism can be said for rugby as well. In ice hockey, hip pointers can result from being checked into the boards or by contact with another player or player’s equipment.[3] Other non-contact sports or high- versus low-energy traumatic mechanisms can also cause iliac crest contusions. In this scenario, a direct fall or a direct traumatic blow (i.e., secondary to a motor vehicle collision[4]) is often the precipitating factor.

Injuries to the hip and pelvis in sports are much less common compared to injuries about the knee and/or ankle.[5][6][7] Hip injuries comprise 5% to 10% of athletic injuries, and hip pointers comprise an even smaller relative subset percentage of these hip injuries. A review of injuries in the National Football League from 1997 to 2006 reported an incidence of 0.3%, with an average of 5.6 days of training lost due to injury.[8]

Following direct impact to the iliac crest, an ensuing hematoma develops around the area and often includes varying degrees of bleeding into the hip abductor musculature. The iliac crest is the origin of several muscles which can be affected depending on the degree and extent of the zone of injury[9][10]:

A detailed history, including current symptoms and the mechanism of injury, should be obtained.

A hip pointer is usually caused by a direct blow or from a fall striking the iliac crest or greater trochanter. Most commonly, patients present with varying degrees of ecchymoses or contusion around the area of impact.  The patient will be tender directly over these areas, and often range of motion (ROM) about the hip is limited secondary to pain. The hip abductors are typically weak, while the motor strength of the hip flexor and extensors should be intact. Hip abductors and external rotators may exhibit limited strength secondary to pain.

Radiographs are needed if a fracture or myositis ossificans is suspected. These injuries are an important consideration for high school and college athletes because the ischial tuberosity and anterior superior iliac spine may fuse as late as the third decade of life. Pediatric and adolescent athletes should be evaluated to rule out potential pelvic avulsion injuries, including[5]:

Consider CT scans if the patient has continued pain or the pain exceeds that expected from examination findings. A bone scan can exclude stress fractures if initial symptoms do not resolve. An MRI obtained in the setting of an isolated iliac crest contusion would likely reveal a large hematoma but is otherwise unremarkable.

The initial therapy of a hip pointer injury includes ice, anti-inflammatory pain medication, compression, rest, and avoidance of weight-bearing as guided by the patient's reported symptoms. As the pain decreases, the initiation of range of motion and active resistance exercises should begin.  If a hematoma is present, aspiration can provide some pain relief and may potentially mitigate the risks of developing myositis ossificans. A local anesthetic such as 1% to 2% lidocaine or 0.5% bupivacaine (5 mL to 9 mL) may provide short-term pain relief.  It is considered safe, but little data support this practice.  Even though there are no studies supporting corticosteroids, it is an accepted practice in the sports medicine community.  If compartment syndrome is suspected, measure compartment pressures and consult an orthopedic surgeon or sports medicine specialist. An orthopedic surgeon should also be consulted if there is an avulsion fracture or for pain lasting longer than two weeks.

The differential diagnosis for an iliac crest contusion/hip pointer includes but is not limited to[11][12][13]:

Most patients can gradually return to normal levels of activity within two to three weeks.

If the patient has other diseases (diabetes, congenital bone dysfunction, anticoagulants, etc.), it is necessary to explain to the patient to avoid further contact (sports) or to pay more attention to the movements (take a stick if necessary).

Padding at the injury site may decrease the incidence of re-injury, limit pain, and allow a return to activity sooner. Patients with a hip pointer may return to activity once the pain and swelling resolve, and normal function return. Patients with a hip pointer are at risk for recurrent injury and should be advised to avoid activities that may induce a repeat injury.

The management of iliac crest contusions involves the coordination of athletic trainers, all levels of healthcare providers including orthopedic specialty trained nurses, and clinicians. The latter often entails referral to a sports medicine or orthopedic specialist, although many primary care physicians and emergency medicine physicians should feel comfortable managing this relatively benign condition. Although surgery is essentially never indicated for these injuries, chronic pain and dysfunction can significantly hinder a patient's and athlete's overall quality of life and negatively impact the required performance. School and emergency department nurses will see this condition commonly. They participate in patient and family education and facilitate referrals for further care. [Level V] 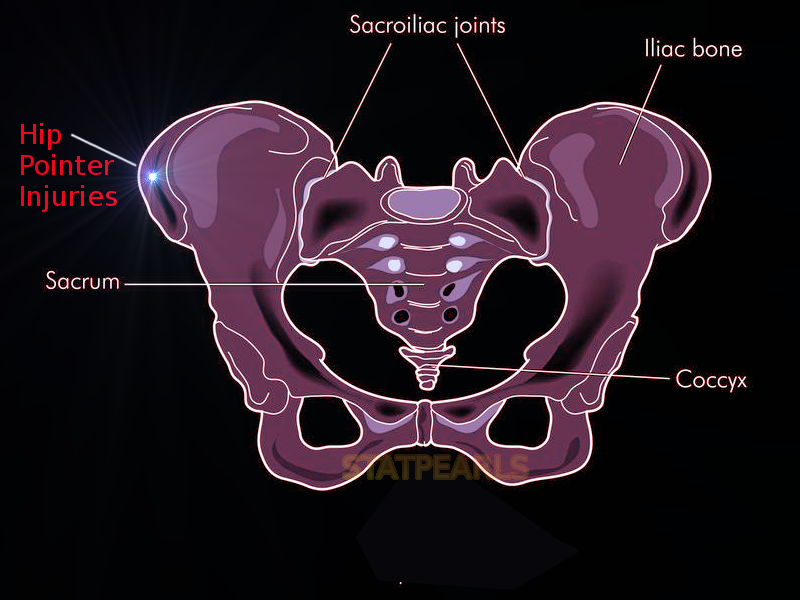