Gluteus medius is the primary hip abductor. Gluteus minimus and the tensor fascia latae also serve as additional hip abductors. Both gluteus medius and minimus act from the pelvis to abduct the thigh and rotate it internally. The anterior fibers help with internal rotation of the thigh, while the posterior fibers help with lateral rotation when the knee is in extension. Gluteus medius acts from the femur to stabilize the pelvis and maintain the trunk upright when standing on one leg, running, and walking when one leg is off the ground. With one foot being off the ground, the bodyweight tends to make the pelvis sag downwards on the unsupported side. Gluteus medius and minimus of the supported side counteract this force by powerful traction on the hip bone. The pelvis is prevented from sagging downwards and may even be raised a little on the unsupported side. The force produced by hip abductor muscles to maintain stability during single-limb support accounts for most of the compressive force generated between the acetabulum and femoral head.[2]

It is a flat, triangular muscle located under and in front of the gluteus maximus. It originates from that part of the external face of the hip bone placed between the anterior and posterior gluteal lines, from the external lip of the iliac crest, from the anterior superior iliac spine, and the gluteal fascia. The muscle bundles fan-fold downwards, gathering in a tendon that inserts on the external face of the greater trochanter. The muscle is covered by a thick sheet of the gluteal fascia, by the great gluteus, and by the tensor of the lata fascia; it is deeply related to the small gluteus and the hip bone.

The lower limb bud forms at around four weeks, corresponding to embryonic stage 14. By stage 17, the lower limb has a flattened footplate with an identifiable hip joint but no true knee. During stages 20 to 23, the digits separate, and toes are clearly defined by stage 23, which corresponds to the end of week eight. Like other skeletal muscles, the gluteus medius is formed by cells derived from somites present at the level of the lower limb bud. These cells demyelinate from the hypaxial edge of the dermomyotome. They subsequently migrate into the limb bud and proliferate there. With the expression of myogenic determination factors, they eventually differentiate into the gluteus medius muscle.[3]

The superior gluteal artery supplies the gluteus medius muscle. It is the largest branch of the internal iliac artery. The artery travels posteriorly between the first sacral ramus and the lumbosacral trunk. It exits the pelvis via the greater sciatic foramen superior to the piriformis and further divides into deep and superficial branches. The deep branch passes between the gluteus medius and the surface of the bone and divides into inferior and superior branches; the superior branch inserts into the gluteus medius via 4 to 7 perforators and 0 to 2 perforators to gluteus minimus.[4] It anastomoses with an ascending branch of the lateral circumflex femoral artery and the deep circumflex iliac artery. The inferior branch runs obliquely through the gluteus medius and supplies it via 3 to 8 perforators and gluteus minimus via 1 to 3 perforators.[4] It anastomoses with the lateral circumflex femoral artery. The superior gluteal artery exits the pelvis at an acute angle, which increases its vulnerability to shearing forces. The sharp fascia of the piriformis may compromise the artery during displaced fractures. Surgical procedures such as acetabular fracture surgery place the superior gluteal vessels and nerves at risk of injury.[5] The superior gluteal artery rarely arises from the internal pudendal artery. It occasionally arises with the inferior gluteal artery directly from the internal iliac artery. Internal iliac nodes surround the branches of internal iliac vessels, which receive the lymphatic drainage of the gluteal region. The common iliac nodes receive lymphatic drainage from the internal iliac nodes, which lie around the common iliac artery. The common iliac nodes empty into the lateral aortic nodes.

The superior gluteal vein (SGV) drains blood from the gluteal region through two branches: a superficial branch and a deep branch. SGV runs together with the upper gluteal artery, enters the pelvis through the large ischial foramen in the supra-pyriform canal, and ends in the internal iliac vein. The SGV anastomoses with the inferior gluteal vein.

The inferior gluteal vein (IGV) drains the posterosuperior region of the thigh and buttock. It originates from double branches that converge in a single trunk that runs together with the lower gluteal artery. The IGV anastomoses with the medial circumflex veins of the femur and the superior perforating vein, which are tributaries of the deep femoral vein. IGV enters the pelvis through the lower part of the large ischial foramen and flows into the distal portion of the internal iliac vein.

When the gluteus medius muscle is subject to a functional alteration for various causes (trauma, injuries, pathologies), the muscle volume becomes reduced. This degeneration happens because the muscle is not properly involved in its actions, loses coordination, and consequently, its contractile activity decreases, losing volume.

Cases of the gluteus medius muscle having physiological or anatomical variations do not appear in the literature.

Gluteus medius and its supplying artery and nerve suffer damage due to hip fracture, hip dislocation, and hip arthroplasty. In a direct lateral approach during hip arthroplasty, the gluteus medius is surgically divided to gain access to the hip joint; therefore, this approach has the highest chance of nerve damage.[7] During the percutaneous placement of iliosacral screws, which is a popular technique employed to treat complicated injuries of the pelvis, the deep superior branch of the superior gluteal nerve and vessels are at significant risk even when utilizing soft tissue protecting cannulas, and the screws are appropriately placed.[8] Gluteus medius tear can present as chronic trochanteric bursitis resistant to medical treatment and requires surgical management.[9]

In cases of gluteus medius and minimus paralysis, patients will have a characteristic lurching gait, also known as Trendelenburg gait. If these two muscles and their innervations are intact, paralysis of other muscles acting on the hip joint will have little impact on walking or running. Greater trochanteric pain syndrome (GTPS) is attributable to tendinopathy of the gluteus medius and/or minimus with or without coexisting bursal pathology.[10] Patients commonly complain of lateral hip pain, localized to the greater trochanter, which increases with side-lying at night and weight-bearing activities.[10] The condition is diagnosed clinically by lateral hip pain with point tenderness at the greater trochanteric region. The pain increases with prolonged repetitive activity involving the gluteus medius, such as walking, running, standing on one leg, or climbing stairs. The superior gluteal nerve can incur damage during an intramuscular injection in the gluteal region. It is advisable to administer injections in the upper lateral quadrant to avoid injuring the superior gluteal and sciatic nerve, the latter of which is usually found in the lower quadrants of the gluteal region.[6]

Gluteus medius syndrome (GMS) is one of the causes of back pain or leg pain and is similar but not the same as the greater trochanteric pain syndrome. GMS is associated with degeneration of the lumbar vertebrae, osteoarthritis at the level of the hips and/or the knee; it can correlate with failed back surgery syndrome.[12]

A differential diagnosis to detect the presence of gluteus medius tears is to perform an internal counter-resistance rotation test.[13]

Calcification of the tendon of the gluteus medius muscle can mimic the presence of lumbar radiculopathy (lumbar hernia); an X-ray makes the diagnostic difference.[14]

An alteration of the function and/or structure of the gluteus medius muscle-tendon can cause snapping hip syndrome; the use of ultrasound imaging is the fastest tool for differential diagnosis.[16] 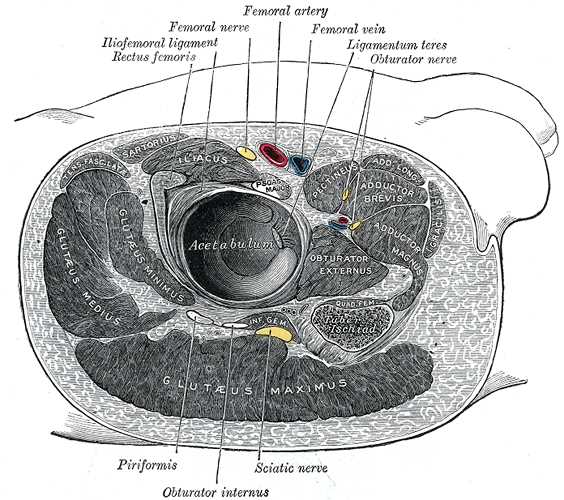 Neumann DA, Kinesiology of the hip: a focus on muscular actions. The Journal of orthopaedic and sports physical therapy. 2010 Feb;     [PubMed PMID: 20118525]