The purpose of this article is to give an introduction of the gastrointestinal system, provide an outline of basic embryology, summarize the embryological events that take place with the gastrointestinal tract, and finally provide specific tests that can be utilized to detect GI anomalies.

The gastrointestinal system has the divisions: the foregut, midgut, and hindgut. The foregut (or anterior gut) is from the oral cavity to the initial part of the duodenum. The midgut is from the mid-duodenum to the initial two-thirds of the transverse colon. The hindgut is from the later one-third transverse colon to the upper portion of the anus. The three sections of the GI tract have different blood supplies; the foregut receives vascular supply by the celiac artery, the superior mesentery artery supplies the midgut, and the hindgut gets its supply from the inferior mesentery artery.[2]

During the first three weeks of fetal development, implantation of the blastocyst occurs. This occurs around the same time as secretion of hCG, which is the hormone detected for pregnancy tests. During the second week, the bilaminar disc forms, which includes the epiblast and hypoblast. During the third week of development, gastrulation occurs; the epiblast cells invaginate, replace the hypoblast, and proliferate into the middle layer, while the primitive streak forms the ectoderm. This process of gastrulation leads to the development of the three germ layers: ectoderm, mesoderm, endoderm. These layers form different parts of each system, as discussed above.

During week four, the heart begins to beat and can be detected by ultrasound by week six. Also during week four, limb buds begin to form. By week eight fetal movements begin and by week ten, the genitalia forms.

The changes that occur during embryology take place simultaneously. Organogenesis (development of the organs) occurs from weeks three to eight. Avoiding teratogens especially during these weeks is crucial. The following are the embryological changes that occur specifically with the gastrointestinal tract.

Gastrointestinal development also includes the development of the enteric nervous system. The enteric nervous system (ENS) includes two ganglion neuron networks: the location of the myenteric (Auerbach) plexus is between the inner circular and the outer longitudinal muscle layers, the submucosal (Meissner) plexus is situated adjacent to the mucosal layer. These cells derive from the neural crest cells. The enteric nervous system is developed through many complex mechanisms, such as axon guidance and synaptogenesis, leading to the proliferation, migration, and differentiation of ENS precursors. These plexuses work with smooth muscle cells and mucosal villi to control the absorption and secretion of the GI system. The smooth muscle cells are derived from mesoderm and differentiate in a rostral to caudal wave.[3]

Different epithelial cell types are present by 12 weeks and are resembling adult cells of the intestine by 22 weeks.

Enteric nervous system development, as well as that of other cells in the gut, is regulated by different factors, including the sonic hedgehog and Indian hedgehog, bone morphogenetic protein, Wnt signaling, and platelet-derived growth factor. The hedgehog signaling is vital for early left and right patterning, along with villi formation. The bone morphogenetic protein is essential for dorsal-ventral patterning. Wnt signaling is involved in anterior-posterior signaling, villi formation, and epithelial stem cell proliferation in the intestines. PDGF plays a significant role in smooth muscle differentiation.

These signaling pathways are essential for the cell systems to develop and integrate for GI function.[3]

There can be many defects that take place during embryogenesis that affect the GI tract.

Many different pathophysiological processes can occur during embryogenesis of the GI tract. Many of these can are correctable by surgery and do not cause fetal demise in utero. A few of these embryological defects have associations with other diseases, such as cystic fibrosis and Down syndrome.  Therefore, babies with meconium ileus and duodenal atresia require close monitoring and further evaluation for cystic fibrosis and Down syndrome, respectively.

It is vital during pregnancy to get routine ultrasounds to assess for polyhydramnios to suspect any GI anomalies. If a GI anomaly is suspected, it is important to monitor closely for any future surgeries needed for the baby.[10] 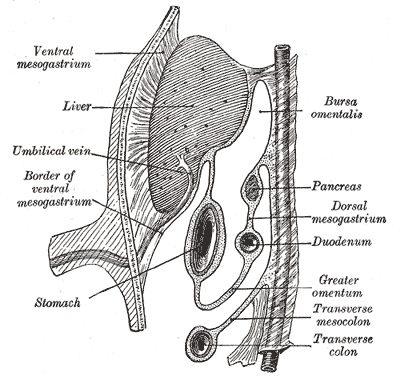