Neuroanatomically, the frontal lobe is the largest lobe of the brain lying in front of the central sulcus. It is divided into 3 major areas defined by their anatomy and function. They are the primary motor cortex, the supplemental and premotor cortex, and the prefrontal cortex. Damage to the primary motor, supplemental motor, and premotor areas lead to weakness and impaired execution of motor tasks of the contralateral side. The inferolateral areas of the dominant hemisphere are the expressive language area (Broca area, Brodmann areas 44 and 45), to which damage will result in a non-fluent expressive type of aphasia. Frontal lobe syndrome, in general, refers to a clinical syndrome resulting from damage, and impaired function of the prefrontal cortex, which is a large association area of the frontal lobe. The areas involved may include the anterior cingulate, the lateral prefrontal cortex, the orbitofrontal cortex, and the frontal poles.

Frontal lobe syndrome is a broad term used to describe the damage of higher functioning processes of the brain such as motivation, planning, social behavior, and language/speech production. Although the etiology may range from trauma to neurodegenerative disease, regardless of the cause frontal lobe syndrome poses a difficult and complicated condition for physicians. Classically considered unique among humans, the frontal lobes are involved in a variety of higher functioning processing, such as regulating emotions, social interactions, and personality. The frontal lobes are critical for more difficult decisions and interactions that are essential for human behavior. However, with the spread of neurosurgery and procedures such as lobotomy and leucotomy for the treatment of psychiatric disorders, a variety of cases have illustrated the significant behavioral and personality changes due to frontal lobe damage. Harlow first described this collection of symptoms as "frontal lobe syndrome" after his research on the famous Phineas Gage who suffered a dramatic change in behavior as a result of trauma. Thus, an abnormality in the frontal lobe could dramatically change not only processing but personality and goal-oriented directed behavior.

Prior research has sought to identify the major areas where lesions may occur to cause the behavioral changes in frontal lobe disorders.

Commonly known to cause “frontal lobe personality”, lesions in the orbitofrontal areas classically cause dramatic changes in behavior leading to impulsivity and a lack of judgment. Lesions are usually found in Broadmann’s Areas 10, 11, 12, and 47 is associated with a loss of inhibition, emotional lability, and inability to function appropriately in social interactions. The most popular case involving a lesion in this area is the case of Phineas Gage who had major behavioral changes after his trauma. However, in a study by Tranel and Damasio et al., a variety of other etiologies such as stroke and neoplasms may cause “frontal lobe personality.”[1][2]

Lesions in the areas around Brodmann areas 9 and 46 may cause deficits within working memory, rule-learning, planning, attention, and motivation.[3] Recent studies have reinforced that DLPFC is critical for working memory function and in particular for monitoring and manipulating the content of working memory. DLPFC may also affect attention as several cases have documented patients complaining of attentional deficits after brain trauma.[4] There are also psychiatric implications due to injury to DPFMC. Previous studies have researched how lesions in the DLPFC may cause "pseudo-depressive" syndrome associated with DLPFC associated with a loss of initiative, decreased motivation, reduced verbal output, and behavioral slowness (abulia)[5]. Other processing issues include rule learning, task switching, planning/ problem solving, and novelty detection and exogenous attention.[3][6] The anterior cingulate cortex is important for the motivation behind attention, but may also be involved in a variety of psychiatric disorders such as depression, post-traumatic stress disorder (PTSD), and obsessive-compulsive disorder (OCD).[7]

A new area of research within the dorsolateral frontal cortices revolves around "intuition." The frontal lobes can communicate with the limbic system and association cortex. In turn, this emotional influence associated with abstract decisions to create more efficient or “intuitive” decisions in a short span of time.[8]

The cause of frontal lobe disorders includes an array of diseases ranging from closed head trauma (that may cause orbitofrontal cortex damage) to cerebrovascular disease, tumors compressing the frontal lobe, and neurodegenerative disease. Other causes include epilepsy with frontal lobe foci, HIV, multiple sclerosis, and early-onset dementia.

The epidemiology of the frontal lobe syndrome depends on the underlying cause. However, recent studies have suggested that neurodegenerative causes of frontal lobe syndrome may be under-reported.  A previous study in Japan found that there were at least 12,000 FTLD patients, implying that the disease is not as rare as initially thought [9].

Based on animal and human studies with frontal lobe lesions, there has been added emphasis on lesions involving the dorsolateral convexity and ventromedial orbitofrontal cortex. Both lesions affect behavior however in different ways. As discussed prior, dorsolateral lesions may cause apathetic and abulic states. In contrast, ventromedial orbitofrontal lesions cause impulsive unrestrained behavior and possibly dangerous decisions. Usually, bilateral lesions produce more significant deficits. There has also been a distinction made between left and right frontal lesions. Left lesions are associated with depression-like symptoms, and right-sided lesions are associated with mania. However, frontal lobe syndrome comprises a variety of behaviors that do not fit into hard and fast rules.

Frontal lobe syndrome due to neurodegenerative disorders is usually caused by 2 main histopathologies: alpha-synuclein and tau protein. Tauopathies that impair the frontal lobes include frontotemporal dementia, chronic traumatic encephalopathy, supranuclear palsy, corticobasal degeneration (CBD), and advanced Alzheimer's disease. If tau is hyperphosphorylated, the protein dissociates from microtubules and creates aggregates that are insoluble.[10] The Braak stages classify the degree to which neurofibrillary tangles exist. In contrast, alpha-synuclein is associated with multiple system atrophy, Parkinson's disease, and diffuse Lewy body dementia.

The most important element in testing patients with frontal lobe impairment is to perform a thorough neurologic exam. History should also be obtained from family and close contacts to get a “real idea” of how the patient lives. During the exam, it is important to note for behavioral changes such as abulia, inappropriate jocularity (Witzelsucht), insight impairment, confabulation, utilization behavior and environmental dependency (i.e., patients putting on glasses that are not theirs), perseveration, persistence, spontaneous frontal release signs, and incontinence. A mental status exam should be completed to evaluate attention (digit span forward and backward, months forward and backward), memory, perseveration and set-shifting ability (Luria alternating sequencing, Trails B, Wisconsin card sorting test), ability to suppress inappropriate response (auditory, visual go-no-go tasks, Stroop testing), word generation (FAS word generation), abstract reasoning, judgment, language, and testing for hemineglect. Other exams include olfaction, optokinetic nystagmus testing (with lesions contralateral to the decreased fast phase), hemiparesis or upper motor neuron signs, motor impersistence, gegenhalten (inability to relax muscles for testing of passive range of motion), primitive reflexes, frontal magnetic gait disturbance, and skull shape to suggest a frontal meningioma. However, during the exam, it is important to note if the patient was subject to past abuse, recent trauma or psychiatric stress.

Before a diagnosis of a frontal lobe syndrome, it is important to rule out other causes that may cause cognitive impairment, for example, B12, thyroid function, and syphilis serology if applicable. In regards to imaging, MRI may be done to evaluate for atrophy, hematomas, vascular and microvascular pathology. Although not as specific or sensitive, CT may be done to rule out acute bleeds or hydrocephalus. If there is clinical suspicion for frontotemporal dementia (FTD), neurologists may consider a deoxyglucose PET scan showing decreased activity in the frontal lobe with sparing of the temporal-parietal areas.[11]

Treatment depends on the type of pathology present. For some types of dementia, such as Lewy body, acetylcholinesterase inhibitors have been proven beneficial. In contrast, acetylcholinesterase inhibitors in FTD have not been proven helpful.[12] Nonmedical treatments include physical and occupational therapy, especially in diseases such as frontotemporal dementia. Speech therapy may also be helpful for symptoms like aphasia, apraxia, and dysarthria. Pimavanserin, a selective serotonin 5-HT2A inverse agonist, has been suggested as a new therapy for synuclein-associated psychosis.[13] Furthermore, as executive functioning declines, it is imperative to provide general support at home such as a caretaker.

Differentials include etiologies that would also affect the frontal lobe such as:

The prognosis of frontal lobe syndrome depends on the underlying cause. For reversible and treatable causes such as infections or resectable tumors, the prognosis is more favorable than progressive neurogenerative disorders such as frontotemporal dementia. In the latter cases, treatment is based on symptom control and patients will eventually succumb to the disease.

Complications of frontal lobe syndromes are cause specific. Progressive neurodegenerative disorders have social and behavioral complications requiring multifaceted support services for the patients and their families.

The most important aspect of treatment is patient and family education in patients affected by these syndromes. Patients suffer from cognitive, behavioral, and physical symptoms. Patients and their families need to be educated on the importance of providing supportive and safe environments for patients who will likely have a progressive decline in functional and cognitive abilities. Referrals to social work and other supportive services should be made early to help them cope with the changing needs of the patient.

Frontal lobe syndrome is due to a broad array of pathologies ranging from trauma to neurodegenerative diseases. The most important clinical feature is the dramatic change in cognitive function such as executive processing, language, attention, and behavior.

A neuropsychologist consult should be done to test the baseline cognitive function better and to create a cognitive treatment plan. Unfortunately, medications for frontal lobe syndrome are mainly aimed to treat symptomatically. During hospitalizations, care should be given to providing a safe and secure environment. Given the complexity and variability within frontal lobe syndrome, cases require an interprofessional team involving nurses, therapists, physicians, and social workers. It is important to plan for a family meeting to discuss end-of-life care should patients no longer have the capacity to make decisions. Non-medical treatments include physical and occupational therapy, especially in diseases such as frontotemporal dementia. Speech therapy may also be helpful for symptoms like aphasia, apraxia, and dysarthria. 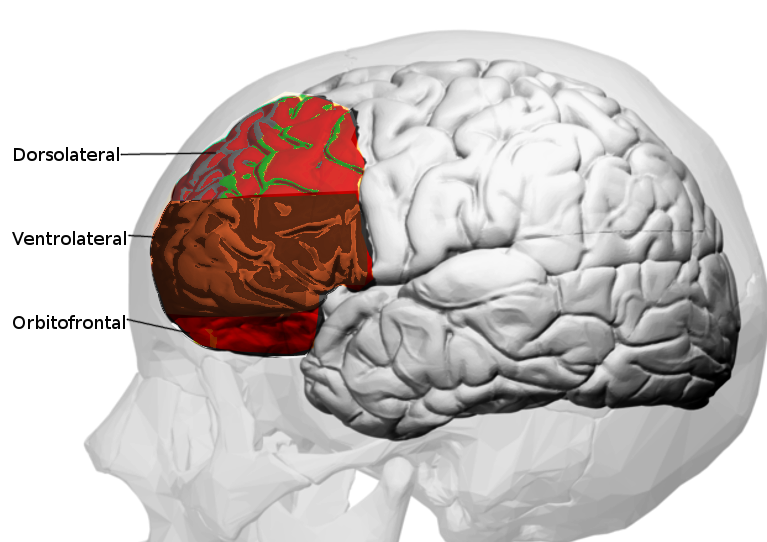 Kerchner GA,Tartaglia MC,Boxer A, Abhorring the vacuum: use of Alzheimer’s disease medications in frontotemporal dementia. Expert review of neurotherapeutics. 2011 May     [PubMed PMID: 21728274]