Fibromuscular dysplasia (FMD) is a rare systemic vascular disease, affecting younger women and accounting for 10% to 20% of the cases of renal artery stenosis. FMD is an idiopathic, non-inflammatory, non-atherosclerotic disease commonly involving renal and carotid arteries; however, it can affect any arterial bed. FMD classically presents as renovascular hypertension but can also manifest as stroke in young adults. Early diagnosis and treatment are important for a long-term prognosis. This activity reviews the pathophysiology and presentation of fibromuscular dysplasia and highlights the role of the interprofessional team in its management.

Renal artery stenosis, the most common cause of secondary hypertension, is predominantly caused by atherosclerotic renovascular disease. Fibromuscular dysplasia (FMD) is a rare systemic vascular disease, affecting younger women and accounting for 10% to 20% of the cases of renal artery stenosis. FMD is an idiopathic, non-inflammatory, non-atherosclerotic disease commonly involving renal and carotid arteries; however, it can affect any arterial bed. FMD classically presents as renovascular hypertension but can also manifest as stroke in young adults. FMD can also affect the coronaries, aorta, and pulmonary artery. Early diagnosis and treatment are important for a long-term prognosis.[1][2][3]

The etiology of fibromuscular dysplasia (FMD) is unclear despite extensive research. Environmental and genetic factors have been associated with FMD. Biggazi et al. reported bilateral FMD in identical twins, raising the possibility of inheritance. In a retrospective analysis of 104 patients with renal FMD, Pannier-Moreau et al. reported an 11% prevalence of familial cases where at least one sibling showed angiographic evidence of renal FMD. Bofinger et al. described an association between the polymorphisms of the renin-angiotensin gene. Plouin et al. described an association between HLA-DRw6 histocompatibility antigen and FMD.[4]

Environmental influences include smoking, with a retrospective analysis showing more smokers among FMD patients. Mechanical factors like renal mobility have been suggested, given the higher vulnerability of the right kidney over the left. Female predilection raised the role of estrogens as a causative factor; however, the number of pregnancies did not affect the risk for FMD per Sang Et al. Despite all the possible explanations, the etiology of FMD remains elusive.

Leadbetter and Burkland first described fibromuscular dysplasia (FMD) of renal arteries in 1938. Palubinskas and Ripley reported FMD of craniocervical arteries in 1946. The exact prevalence of FMD remains unknown. The prevalence of renal FMD is 0.4 %, whereas the estimated prevalence of craniocervical FMD is much lower at 0.1%. Autopsy series from Mayo clinic reported a 1.1% prevalence of renal FMD, while prevalence among kidney donors who underwent angiography varied between 2% and 6.6%. Among older hypertensive patients who underwent renal angiography, a prevalence of 5.8% was noted from the cardiovascular outcomes in renal atherosclerotic lesions (CORAL) trial. Evidence from the above studies, interestingly, notes higher prevalence, and many cases may be asymptomatic and thereby often under-diagnosed.[5][6]

FMD occurs predominantly in females below the age of 50 years. The female to male ratio reported in most studies is 3:1, however, data from the US and French registry supported 9:1 female preponderance. The median age for FMD is 48 years, though cases have been reported in pediatric as well as geriatric populations. There is no evidence to support racial or ethnic propensity, but Caucasians are more likely to be affected than Blacks. Bilateral involvement is seen in 15% of the patients.

McCormack and colleagues first used the term "fibromuscular hyperplasia" in the setting of hypertension and renal artery stenosis in 1958. It was in 1965 that Hunt et al. introduced the term as they observed dysplasia rather than hyperplasia alone.

Fibromuscular dysplasia (FMD) can affect any artery. Mettinger and Ericson reported that renal arteries are involved in 58% of cases; craniocervical arteries, 32%; and other arterial beds, 10%. FMD is a segmental, non-atherosclerotic disease affecting the musculature of the small- and medium-sized arterial walls and causing stenosis, aneurysms or dissections of the vascular territories. Macroaneurysms of the carotid and renal vasculature are more common in FMD, predisposing to rupture and leading to intracerebral hemorrhage and renal infarcts. Arteriovenous fistulas and thrombosis also can occur. Hypertension in renal FMD is hypothesized to be from secondary activation of the renin-angiotensin-aldosterone system, though some studies argue against this theory.

Harrison and McCormack proposed a histopathological classification of fibromuscular dysplasia (FMD) based on the arterial layer affected, which was later revised by Stanley. FMD is mainly classified into three types: intimal, medial, and peri-adventitial fibroplasia. These three variants are not mutually exclusive and can co-exist.

This is the most frequent type, occurring in 85% of the cases with alternating ridges of collagen and loss of elastic membrane but preserved internal elastic lamina. The classical “string of beads” appearance on angiography is due to alternating areas of stenosis and dilatations of the renal artery. In contrast to atherosclerotic renal artery stenosis, FMD rarely affects the proximal or ostial section of the renal artery.

Medial FMD is further divided into:

This is the second most common, accounting for 5% to 10% of the cases with circumforaneous deposition of collagen in the intima, resulting in fragmentation of internal elastic lamina. Angiographic appearance is that of concentric smooth stenosis or narrowing.

This is the least common, occurring in less than 1% of the cases with dense deposition of collagen in the adventitia resulting in smooth narrowing appearance on angiography.

The American Heart Association further simplified the classification into focal and multifocal.

Clinical manifestation of fibromuscular dysplasia (FMD) principally depends on the vascular territory affected. Family history may be positive for stroke and hypertension at a young age.

Doppler ultrasound remains the first-line screening test for FMD. Duplex ultrasound revealing turbulence, tortuosity, elevated velocities, and resistive indices in the mid and distal artery are suggestive of FMD. However, duplex ultrasound is operator-dependent, and resolution is impaired by obesity, renal mobility during respiration, and bowel gas.

Computed tomography angiography (CTA) is one of the best tools available to diagnose FMD. It is non-invasive, accurate, reliable, and can generate high-resolution spatial images. Classical CTA findings include the "string-of-beads" appearance of medial FMD. Renal aneurysms and infarcts can also be visualized.

Magnetic resonance angiography (MRA) has comparable sensitivity and specificity to that of CTA but without the risk of radiation exposure and contrast nephropathy; however, it is limited because it may not be used in patients with advanced renal failure. Willoteaux et al. recently showed that MRA had sensitivity and specificity of 97% and 93% respectively when compared to conventional angiography.

Conventional angiography remains the gold standard to diagnose FMD and can also measure the pressure gradient across the stenotic lesions. A pressure gradient of more than 10% is considered to be hemodynamically significant stenosis. Catheter-based angiography is not only superior when compared to other imaging modalities but also offers the opportunity for endovascular therapy at the same time. Novel diagnostics like intravascular ultrasound may further enhance the angiography and aid in evaluating restenosis following angioplasty.

If the disorder presents with a transient ischemic attack (TIA), then one may attempt treatment with thrombolytics or percutaneous thrombectomy. One should always consider a diagnosis of FMD if the individual is young and develops a stroke. IF FMD is diagnosed on routine imaging without symptoms, then antiplatelet agents should be started.

Arterial dissection is usually managed with anticoagulation as long as hemorrhage has been ruled out. Treatment is for 3-6 months with warfarin.

Controlling hypertension is the cornerstone in the treatment of renal FMD. Angiotensin-converting enzyme inhibitor (ACE-I) or angiotensin receptor blocker (ARB) is the drug of choice, given activation of the renin-angiotensin-aldosterone system in renal FMD. Renal function should be monitored, as acute kidney injury may complicate the treatment, especially in bilateral renal artery stenosis or solitary kidney. Other antihypertensive agents like diuretics, calcium channel blockers, and beta-blockers are added as needed to control the blood pressure.

Smoking cessation should be advocated as smokers tend to have a more aggressive course than non-smokers. Role of statins is uncertain; Davies et al. demonstrated no benefit of statins on restenosis rates following angioplasty.

Anti-platelet therapy with aspirin is reasonable for all FMD patients with an ischemic insult like stroke or renal infarct. Anticoagulation is reserved for patients with renal or extracranial dissection.

Endarterectomy is not possible in FMD because the lesions are extremely fibrotic.

Percutaneous transluminal angioplasty (PTA) is the first-line modality for revascularization, with cure rates reaching 60% to 80% and technical success rate up to 100%. There is no indication for stent placement in FMD under most circumstances per the American Heart Association. Angioplasty with stent placement is considered for dissection or perforation of the involved artery. The hypertensive cure is achieved in 50% of the cases. The meta-analysis by Trinquart and his colleagues revealed a 45.7% cure rate for blood pressure; however, when adjusted for patients not on antihypertensives, it was only 35.8%. Negative prognostic factors include age greater than 50 years, longer duration of hypertension and co-morbid factors like diabetes, hyperlipidemia, smoking, and atherosclerosis. Hematoma, hemorrhage, dissection, and thromboembolic complications can complicate PTA in 6% of the patients.

There are no randomized control trials comparing PTA with surgical revascularization. PTA is the preferred choice over surgery because it is less invasive, lower cost, and has fewer complications. Surgical revascularization is recommended for patients with smaller renal arteries (less than 4 mm), branch renal artery, severe intimal fibroplasia, associated aneurysms, and failure of the PTA. Surveillance with Duplex ultrasonography is recommended post-revascularization at the first post-operative visit, bi-annually for two years, and then yearly.

The differentials of fibromuscular dysplasia (FMD) include but not limited to the following:

Long-term data regarding prognosis in fibromuscular dysplasia (FMD) is lacking. The American Heart Association states that progression in FMD is unusual, and moreover, it is challenging to accurately assess progressive stenosis. Currently, it is believed that FMD is a benign disorder that is incidentally discovered. Of all the vessels, however, involvement of the cranial nerves carries a grim prognosis in young people. Finally, the disorder is also involved in the dissection of the arteries, which can turn out to be catastrophic.

Fibromuscular dysplasia (FMD) most commonly involves renal, coronary, and carotid arteries. Following complications can arise from the involvement of these arteries:

Patients with fibromuscular dysplasia (FMD) who have developed strokes should be properly educated in this regard. Further education regarding FMD should help patients recognize further symptoms that may indicate disease progression or complications. Education regarding other risk factors for stroke should be provided including abstinence from smoking, the benefits of a healthy diet, and good glycemic control. Patients should be informed about the risk of dissection and cautioned to avoid neck trauma and rigorous neck manipulations.

Fibromuscular dysplasia (FMD) is a rare disorder that often presents with hypertension or a stroke. The condition can affect medium-sized arteries and it can have a varied presentation depending on the age of the patient. The condition is best managed by an interprofessional team consisting of a radiologist, cardiologist, internist, vascular surgeon, and an interventional radiologist. Once diagnosed, patients may require angioplasty but because of recurrence, long-term follow-up is necessary.

The current belief is that FMD is a benign disorder that is often discovered incidentally. However, in patients without symptoms, management with antiplatelet drugs is recommended. The blood pressure should be managed with antihypertensives. In symptomatic patients, one may use percutaneous angioplasty or thrombolytic therapy.

It is important to follow up on these patients because their long-term history has not been well documented. Case reports of strokes in young people and carotid artery dissection are replete in the literature. Once a patient has been diagnosed with FMD, the team should communicate the management plans so that complications can be prevented. 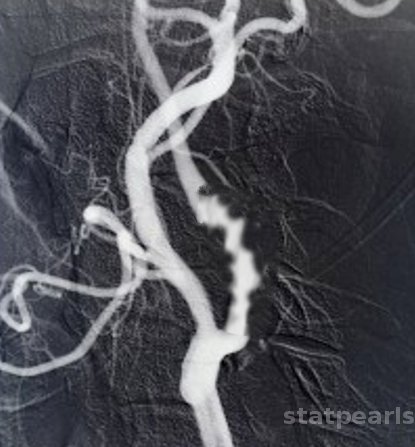 Cunningham TK,Draper H,Rajesh U, Management of a pregnancy with underlying fibromuscular dysplasia with a history of stroke and carotid artery dissection. Journal of obstetrics and gynaecology : the journal of the Institute of Obstetrics and Gynaecology. 2018 Nov 10;     [PubMed PMID: 30417729]