Structure of the Femoral Triangle

The function of the Femoral Triangle

The femoral triangle itself does not have an intrinsic function but contains many vital structures that can be located quickly using the landmarks of the femoral triangle. The muscles that form the borders of the triangle also allow many different movements.

The extremities of the body initially form as limb buds containing an outer layer of ectoderm with an inner layer of mesoderm. The lower limbs begin development after the upper limbs, at about week 4 of gestation with limbs being well differentiated by about 8 to 10 weeks.[2]

The muscles and fascia of the femoral triangle derive from mesoderm contained within developing limb buds at the time of extremity formation.

The blood vessels, as well as the lymphatics of the femoral triangle, are also derived from mesoderm.

The epidermis above the femoral triangle and femoral nerve form from the ectoderm contained in limb buds at the time of extremity formation.

The femoral triangle includes the inguinal ligament and the following muscles:

Adductor Longus - forms the medial border as well as a portion of the medial floor of the femoral triangle. Its origin is the superior ramus of the pubis and insertion is on the linea aspera of the femur.[8]

Sartorius - is the longest muscle in the body and it makes the lateral border of the femoral triangle.[8] It originates at the anterior superior iliac spine and inserts into the pes anserine.

Iliopsoas - forms the lateral floor of the triangle. Iliopsoas refers to the two muscles, iliacus and psoas, that originate as separate muscles in the abdomen and join into one in the hip to serve as the most powerful hip flexing muscle.[8] 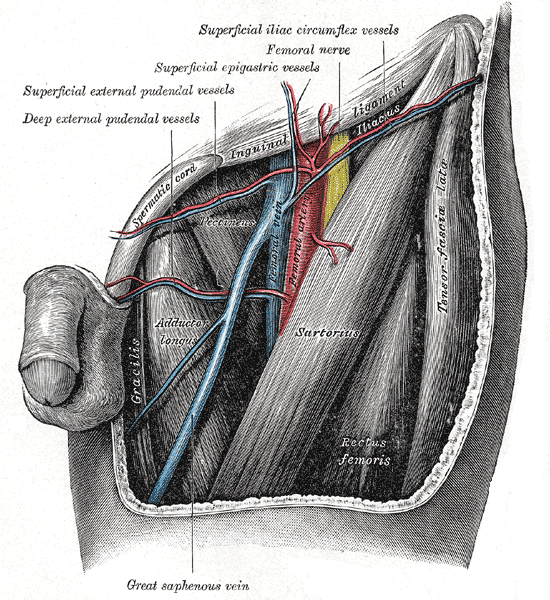 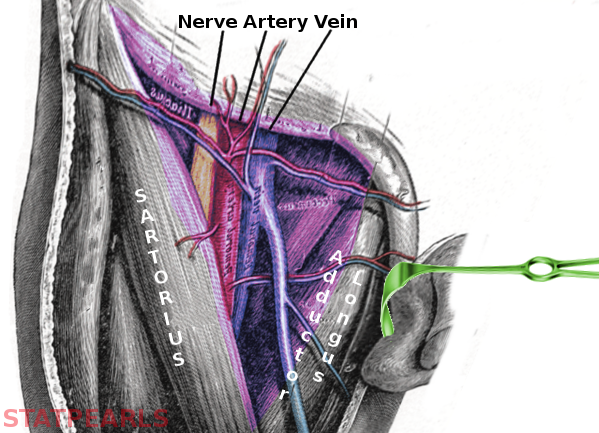