Erythrasma is a common skin disorder caused by bacteria. It was first described in 1859 by Burchardt. He thought the etiology was fungal. In 1862, Burchardt's teacher, Von Barensprung coined the term erythrasma and named the bacteria Microsporum minutissimum. Today, it is known to be caused by Corynebacterium minutissimum. This activity describes the cause, pathophysiology, and presentation of erythrasma and highlights the role of the interprofessional team in its management.

Erythrasma is a common skin disorder caused by bacteria. It was first described in 1859 by Burchardt, who thought the etiology was fungal. In 1862, Burchardt's teacher, Von Barensprung coined the term erythrasma and named the bacteria Microsporum minutissimum. Today, erythrasma is known to be caused by Corynebacterium minutissimum, which is a gram-positive, catalase-positive, non-spore-forming organism.

Erythrasma usually causes infection of the intertriginous parts of the body and causes itching, scaling, and erythema. It is often asymptomatic. [1][2]

In 1961, Sarkay et al. examined scrapings from scales of an erythrasma lesion by microscopy. They described the presence of gram-positive rods which were found to be C. minutissimum. The bacteria have also been shown to cause severe disease in immunocompromised patients including cutaneous fistulas, granulomatous lesions, and subcutaneous abscesses. Corynebacterium is a commensal skin bacteria. Partly due to the potential for serious complications in immunocompromised hosts, C. minutissimum has had its genome sequenced by organizations within the Centers for Disease Control and Prevention (CDC) in Atlanta, Georgia.

Other environmental and host factors that increase the risk of erythrasma are living in a humid environment, excessive sweating, diabetes, poor hygiene, advanced age, coexisting skin disorders, and obesity.[3][4]

Most erythrasma cases occur in healthy adults. The infection occurs less often in children. It tends to be more prevalent in hot and humid climates. Individuals who live in institutions are also more likely to develop erythrasma. This includes college students in dorms, soldiers in barracks, and senior adults in nursing facilities. The incidence of erythrasma may increase with age. It occurs worldwide and it may occur more often in males. Overall, it appears that erythrasma is most common in African Americans.

Under conditions of moisture and occlusion, C. minutissimum grows in the upper levels of the stratum corneum. It produces a coral-red fluorescence on Wood's light exam because of coproporphyrin III.

Gram stain shows gram-positive rods. If C. minutissimum is left for long on the culture plate, the culture becomes gram-negative and of varying shapes. C. minutissimum is not acid-fast. It produces acid from dextrose, sucrose, and maltose, but not lactose. It has been proven to be sensitive to erythromycin in vitro but resistant to penicillin. It is difficult to visualize the organism on hematoxylin and eosin-stained slides and it might be better visualized with Periodic Acid-Schiff and Giemsa stains.

Erythrasma is most commonly observed in the toe webs followed by the groin crease. It is less commonly found in the axilla. Patients may give a history of mildly pruritic skin discoloration in any of those areas. Patients may also complain of scaling skin. The skin is usually dark red and moist. The intensity of pruritus can vary. The skin lesion is well demarcated as a macular patch. Often the skin will have a wrinkled appearance.

C. minutissimum is the most common cause of bacterial infection of the interdigital spaces of the feet. It will cause maceration and scaling. It most often occurs between the fourth and fifth toes. It is mostly asymptomatic but can be pruritic. It does occur occasionally with dermatophyte or candidal infections. A potassium hydroxide (KOH) preparation may be necessary to assess for coexisting infection.

Also either mildly pruritic or asymptomatic. It occurs as patches or plaques in intertriginous areas and results in a "cigarette paper" appearance of the skin. It may have a fine-scale.

A rare form of erythrasma that may affect any part of the body. It is more often seen in black women in tropical climates. It is characterized by well defined scaly plaques on the trunk and proximal parts of the limbs that have coral-red fluorescence under Wood's lamp.

Wood's lamp does help in the diagnosis of erythrasma. However, if no lamp is available, it is reasonable to start empiric treatment based on the exam. The color fluorescence is due to the coproporphyrin lll manufactured by the bacteria. The biopsy of suspected erythrasma sometimes shows the rod-like organisms. However, these are often difficult to observe, and the biopsy specimen may require a Giemsa stain or Periodic Acid-Schiff stain. This makes biopsy somewhat impractical for diagnosis.

Erythrasma responds to topical and oral therapies, but it often reoccurs. Topical therapies include fusidic acid, clindamycin, or erythromycin. Fusidic acid is an antibiotic that is not available in the United States. It acts by blocking aminoacyl-tRNA transfer to protein in susceptible bacteria. It was compared to oral erythromycin and clarithromycin in a double-blind placebo-controlled, randomized study at the University Hospital in Izmir, Turkey. It enrolled 151 adults over age 18 and divided them into five groups: group one got a single dose of 1 gram of oral clarithromycin, group 2 got 1 gram per day of oral erythromycin for 14 days, group 3 got placebo tablets for 14 days, group 4 got topical fusidic acid cream 2% twice a day for 14 days, group 5 got placebo cream twice a day for 14 days.

Extensive erythrasma requires oral therapy. Oral options include 1 gram of clarithromycin for a one time dose. 1 gram of oral erythromycin (in divided doses) for 14 days is also an option.

Clarithromycin has some advantages over erythromycin in that it can be given as a single dose. Clarithromycin is a macrolide that inhibits protein synthesis by binding to the 50s ribosomal subunit of the bacteria. It has better bioavailability than erythromycin due to a hydroxy to O-methyl substitution at position 6 on the lactone ring. It may be more effective in treating erythrasma in the groin. There have been few comparative studies between erythromycin and clarithromycin.

The following should be considered in the differential for erythrasma:

Seborrheic dermatitis involves greasy and erythematous lesions along the scalp and nasolabial folds. Inverse psoriasis has a shiny appearance. The coral-red fluorescence with Wood's lamp exam helps distinguish erythrasma from seborrheic dermatitis and inverse psoriasis. KOH prep may be required to distinguish erythrasma from dermatophytosis of the toe webs. Erythrasma of the groin is easily distinguished from tinea cruris due to the scaling border of tinea cruris.

The outcomes for most patients with erythrasma are excellent. However, the condition can recur if the trigger factors are not removed. In healthy people, there is no residual sequelae of erythrasma. However, the infection can quickly spread in immunocompromised individuals.

Complications tend to occur in immunocompromised individuals and include:

The management of most skin disorders is with an interprofessional team. Healthcare workers will often see skin lesions whose diagnosis may not be obvious. In such cases, a dermatology consult is highly recommended. Once the diagnosis of erythrasma is made, there are a several topical and oral therapies. Unfortunately, recurrence is a common problem. Patients with extensive lesions usually require oral antibiotics. The disorder may be followed by the primary care providers who need to be familiar with the adverse effects of macrolides, which are frequently used to treat erythrasma.

The outcomes in healthy people are excellent. 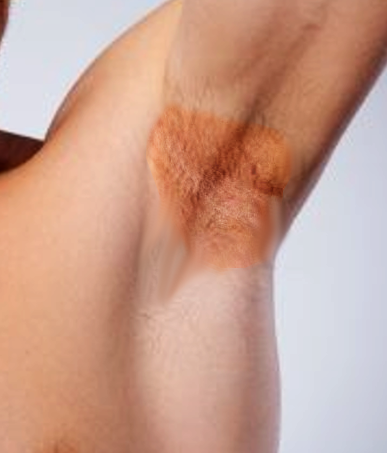 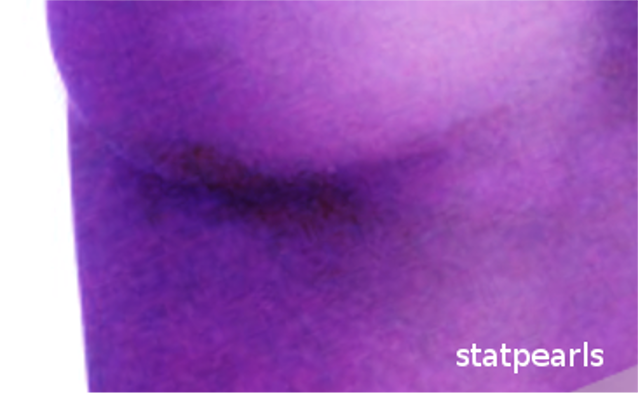 Sand FL,Thomsen SF, Skin diseases of the vulva: Infectious diseases. Journal of obstetrics and gynaecology : the journal of the Institute of Obstetrics and Gynaecology. 2017 Oct;     [PubMed PMID: 28397528]