Epistaxis (nosebleed) is one of the most common ear, nose, and throat (ENT) emergencies that present to the emergency room or primary care. There are two types of nosebleeds: anterior (more common), and posterior (less common, but more likely to require medical attention). The source of 90% of anterior nosebleeds lies within Kiesselbach's plexus (also known as Little's area) on the anterior nasal septum. This activity reviews the cause, pathophysiology, and presentation of epistaxis and highlights the role of the interprofessional team in its management.

Start with a primary survey and address the airway, ensure the airway is patent.  Next, assess for hemodynamic compromise. Obtain large-bore intravenous access in patients with severe bleeding and obtain labs. Reverse blood clotting as necessary, if there is a concern with medication use.[7][8][9]

All patients with moderate to severe nose bleeding should have two large-bore intravenous lines and infusion of crystalloid. The monitoring of oxygen and hemodynamic stability is vital.

Treatment for anterior bleeding can be started with direct pressure for at least 10 minutes. Have the patient apply constant direct pressure by pinching the nose over the cartilaginous tip (instead of over the bony areas) for a few minutes to try to control the bleed. If that is ineffective, vasoconstrictors such as oxymetazoline or thrombogenic foams or gels can be employed. It is important to remove all clot with suction before any attempt at treatment is made. The reasons are twofold: 1) Clot will prevent any medication from reaching the vessel itself and 2) if packing becomes necessary, the clot can be pushed into the nasopharynx and aspirated. If topical treatments are unsuccessful, proceed with nasal examination to identify and cauterize the vessel with silver nitrate. If this too is unsuccessful, anterior nasal packing is necessary. This can be performed with absorbable packing material such as surgicel or fibrillar, or with devices such as anterior epistaxis balloons, or nasal tampons (Rapid Rhino). If silver nitrate is used to cauterize a septal blood vessel, only use it on one side of the septum to prevent septal perforation. Thermal coagulation is painful and should rarely be attempted in an emergent setting.

Traditional petrolatum gauze can be used if one does not have access to balloons or tampons.

If none of this is successful, the bleeding may be from the posterior or superior nasal cavity. Symptoms can include active bleeding from both nostrils or active bleeding present in the posterior pharynx. Longer (7.5cm) nasal tampons are available that provide some more posterior pressure and can be employed in this situation. Formal posterior nasal packing should only be performed by experienced personnel as it requires admission and telemetry monitoring, and sometimes intubation. It is associated with higher rates of complications like pressure necrosis, infection, or hypoxia, and may trigger a nasal-cardiac reflex (sudden bradycardia after nasal packing - if this occurs, remove the pack immediately). Foley catheters can be used by experienced personnel to tamponade a posterior bleed. If a posterior pack is placed, a formal petrolatum gauze anterior pack must be placed as well to create a closed, tamponaded space in the nasopharynx.

If all of these measures are unsuccessful, the patient should be intubated for airway protection and interventional radiology consulted emergently for embolization. If this service is unavailable, operative ligation of the sphenopalatine and ethmoid arteries can be performed in the operating room by an otolaryngologist. 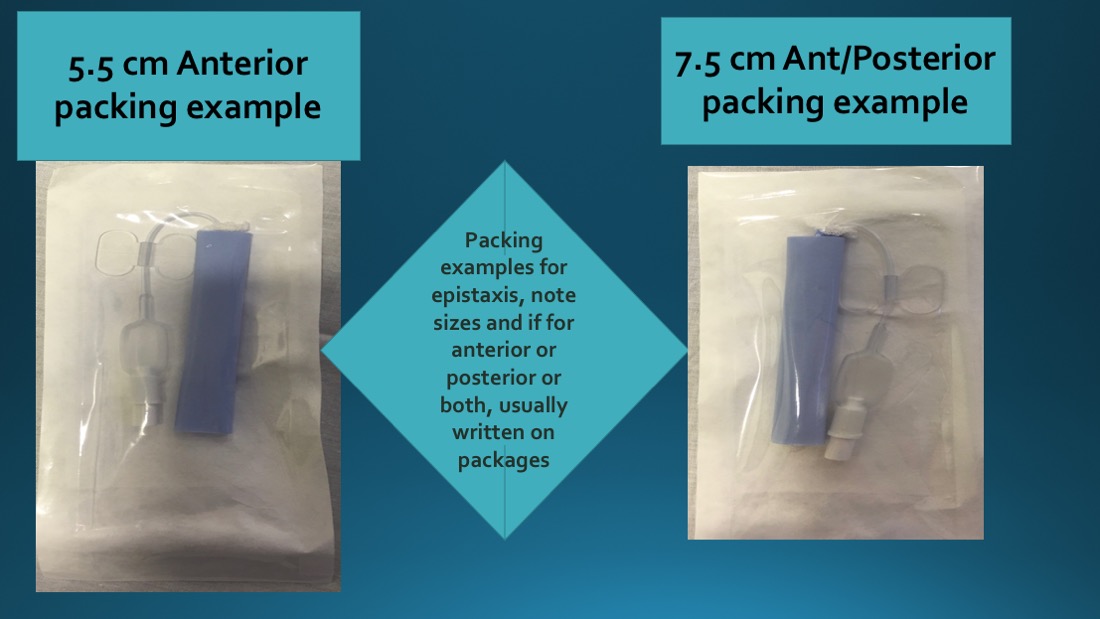 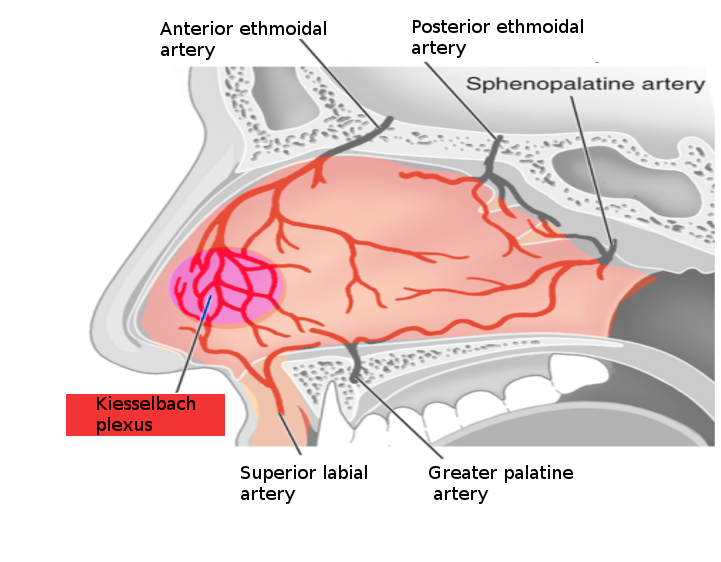