The dorsal root ganglion (DRG) has a significant clinical application, particularly in its association with neuropathic pain. DRG neurons emerge from the dorsal root of the spinal nerves, carrying sensory messages from various receptors, including those for pain and temperature towards the central nervous system for a response.

Until recently, the dorsal root ganglion has been considered a passive organ that metabolically assists functions and pathways between the PNS and CNS. New studies suggest, however, that the DRG is an active participant in peripheral processes, including PAF injury, inflammation, and neuropathic pain development. A proper understanding of the significance and functioning of the DRG can help improve the diagnosis and treatment of neuropathic pain syndromes.

The 31 right and left spinal nerve pairs in humans form from afferent sensory dorsal axons (the dorsal root) and motor ventral efferent axons (the ventral root). As the dorsal root emerges from the intervertebral neural foramina, it forms the dorsal root ganglion (DRG). The DRG is a group of cell bodies responsible for the transmission of sensory messages from receptors such as thermoreceptors, nociceptors, proprioceptors, and chemoreceptors, to the CNS for a response.[1] Its cell bodies are separated by layers of satellite glial cells (SGCs) that inhibit the interaction between somas.

DRG neurons are considered pseudo-unipolar neurons, with one axon that bifurcates into two separate branches resulting in a distal process and proximal process. Action potentials generated by impulses from the periphery do not always need to go through the DRG; they may also bypass the DRG and continue through to the proximal process and spinal cord.[2] This unique feature of the DRG is made possible by its embryological onset as a bipolar neuron before differentiating into its adult pseudo-unipolar nature.

The DRG contains most of the body's sensory neurons. These neurons relay sensory neural messages from the periphery to the central nervous system (brain and spinal cord). Until recently, the belief was that the DRG cell bodies merely acted as storage "helpers" in peripheral processes such as nociception. Recent studies, however, have shown that these somas are not passive but rather active participants in the signaling process; they sense specific molecules and produce molecules needed to regulate the process.

The spinal branch of the dorsal trunk of the segmental arteries provides blood to the DRG. Blood flow to the DRG is regulated by muscular sphincters along the arterioles to meet the varying functional and metabolic demands of the current condition. The DRG is an exception to the otherwise restricted permeability of the peripheral nervous system. While most of the PNS has a low permeability between blood and nervous tissue, much like the blood-brain barrier, the DRG exhibits high permeability using its loose blood-nerve interface. Its high permeability could be of significant clinical relevance because this property of the DRG system makes it vulnerable to low and high molecular weight neurotoxic substances, and toxic metabolites from drug-induced neuropathies.

DRG neurons are considered pseudo-unipolar neurons, with a single axon that bifurcates into two separate branches resulting in a distal process and proximal process.

Understanding the physiologic DRG variants in humans has been limited though there are several proposed rat models to explain phenomena. Variants in the voltage-gated ion channels: SCN9A, Na(v)1.7, and Troy are common sites of current DRG investigation in rats. Some variants considerably influenced the excitability of DRG neurons. The Na(v)1.7 variant 1739V, for instance, was identified in some patients with autonomic dysfunction and neuropathic pain to impair slow inactivation within dorsal root ganglion neurons rendering them hyperexcitable.[5]

The treatment of chronic pain has undergone many progressions since introducing the gate control theory. New treatment targets are continually identified, of which one is the dorsal root ganglion, a relatively novel neural target.

Current methods to reduce neuropathic pain directed at the DRG include[1]:

Of these techniques, DRG radiofrequency ablation is the most common therapeutic choice in favor of its non-surgical, minimally invasive technique. It is also beneficial because it can target not easily accessible areas such as the low back and foot.[1]

Studies have shown ganglionectomy, an irreversible neurosurgical technique, to be less effective in long-term pain reduction than radiofrequency and other neuromodulation techniques. While it can help treat dermatomal segmental pain, it can produce pain in other unwanted areas.[2]

The DRG serves as an ideal target for the treatment of chronic pain. DRG can be easily accessed. Each nerve root communicates to DRG and allows sensory messages from a particular part of the body. DRG stimulation can achieve focused therapy in a specific area.  It is accessible from both the outside of the epidural space and through the neuroforamina and from the epidural space to the outside. The site is further useful as a target for surgery, radio-frequency ablation, pulsed-radio frequency, and anti-inflammatory steroid delivery. 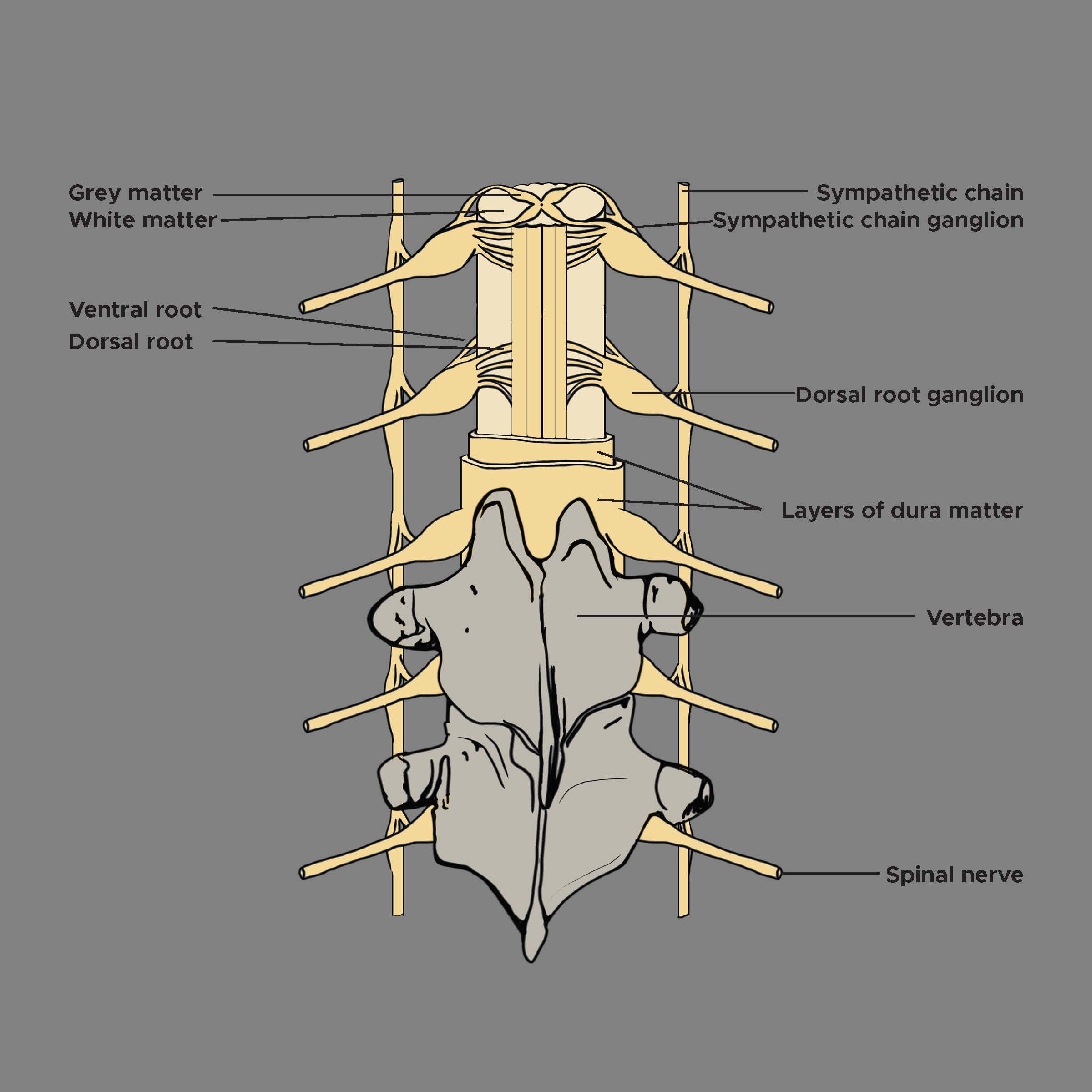