Diphyllobothriasis occurs from the ingestion of larval forms of the fish tapeworm, with the most common species being D. latum. Molecular identification analyses have revealed numerous genus and species with potential for human infectivity. Each species is associated with specific hosts and has the potential to cause infectivity of varying degrees in their host. Thus far, researchers have identified a total of 14 described species of the genus Diphyllobothrium.[1]

Diphyllobothriasis can affect any age group and gender, but the majority of identified cases were middle-aged men. This parasitic infection can be a public health issue for residents and travelers in endemic as well as non-endemic regions. The fish tapeworm, D. latum, has historically been implicated in human illness for thousands of years. The current state of knowledge regarding these parasites points to cohabitation with humans since the early Neolithic period.[2] Epidemiologic studies have concluded that in the 1970s, this infection was estimated to have affected 9 million individuals globally with newer data estimating 20 million people currently infected worldwide.[4][5] Additionally, in recent years, certain areas of the world have seen a re-emergence of diphyllobothriasis thought to be secondary to changes in eating habits as well as globalization.

Furthermore, it is postulated that with changes in eating habits, combined with rapid freezing techniques, there will be an increased speed at which potential fish-borne tapeworm infections will start to arise.[1] Despite this, diphyllobothriasis has suffered from decreased awareness among the public sector and medical professionals. When paired with the need for specialized diagnostic testing, underdiagnosis of diphyllobothriasis is likely when accounting for the true prevalence and incidence. Since diphyllobothriasis is mostly a function of consumption and contact with fish, specific individuals are at higher risk of disease transmission; this includes fishermen, who consume their fresh catches, and individuals who consume uncooked fish regularly.[4]

In humans, the plerocercoid develops into mature tapeworms, which attach and reside in the intestine. The fecundity, which is the reproductive potential of these tapeworms, is extremely high, and one tapeworm is estimated to produce up to 1 million eggs per day.[6] Once established, the tapeworm infection is postulated to induce changes in the concentration of several neuromodulators in the host tissue and serum.[7] Additionally, D. latum infection has been shown to cause structural changes locally, leading to altered gastrointestinal tract functioning by modulating the neuroendocrine response and causing enhanced secretion as well as changing gut motility.[7] Additionally, studies have shown that damage caused by these infections is also mediated through induction of mast cell and eosinophilic granule cell degranulation, leading to the release of inflammatory cytokines.[7] Infection with D. latum has also been shown to lead to anemia secondary to the dissociation of vitamin B12 from its intrinsic factor complex in the gut, which is due to the faster absorption rate of vitamin B12 by the tapeworm relative to the human gut.[4]

In the appropriate clinical picture with signs and symptoms consistent with diphyllobothriasis, the clinician should consider initial laboratory workup. Laboratory workup may reveal peripheral eosinophilia and megaloblastic anemia along with vitamin B12 deficiency.[4] In general, the diagnosis of D. latum is from the presence of eggs or proglottids of the representative shape and structural characteristics in the patient’s stool sample.[4] This allows for the diagnosis at the genus level. Molecular methods to identify D. latum are also available and allow for a more reliable tool to identify the infection down to the species level, which is clinically more relevant for epidemiological studies and includes the use of polymerase chain reaction (PCR) and restriction fragment length polymorphisms. Additional tests found in the literature include endoscopy, abdominal magnetic resonance imaging, and colonoscopy, but these are both costly and invasive.[15] Humans infected with D. latum will begin to pass eggs in their stools on average 15 to 45 days after the ingestion of the plerocercoid stage of larvae.[4]

Patients infected with D. latum are usually asymptomatic or present with a mild disease but may have complications if the worm burden is high. This usually manifests secondary to severe vitamin B12 deficiency and its complications, including megaloblastic anemia and development of subacute combined degeneration of the spinal cord as well as cognitive decline.[18] 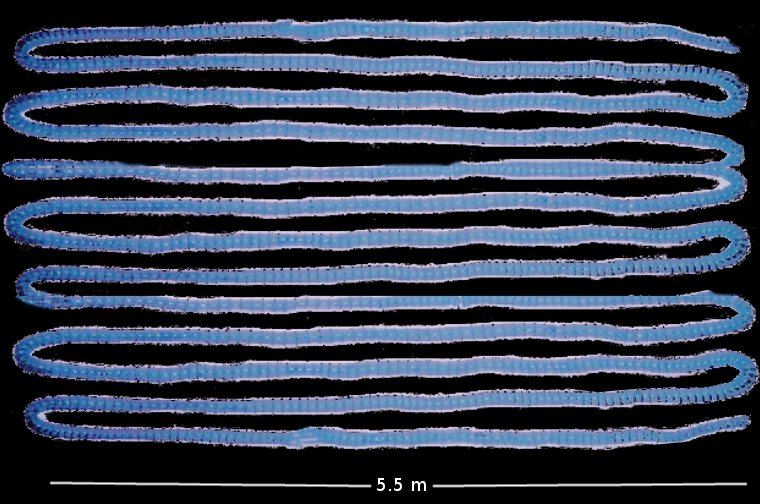 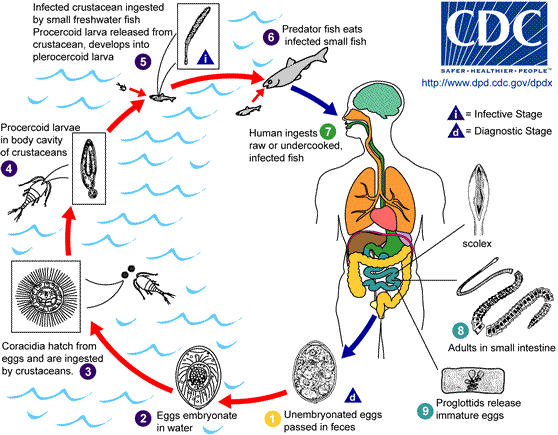