Dermatitis herpetiformis is a chronic, autoimmune, blistering disease that causes an extremely pruritic rash that predominantly affects the extensor surfaces. The characteristic vesicles are often not apparent as they are destroyed by excoriation. The disease is closely associated with gluten-sensitive enteropathy (GSE); both conditions are characterized by the development of IgA autoantibodies against transglutaminases that, in the case of dermatitis herpetiformis, are deposited in the superficial papillary dermis. This activity reviews the pathophysiology of dermatitis herpetiformis and highlights the role of the interprofessional team in its management.

Dermatitis herpetiformis is a chronic, autoimmune, blistering disease that causes an extremely pruritic rash that predominantly affects the extensor surfaces. The characteristic vesicles are often not apparent as they are destroyed by excoriation. The disease is closely associated with gluten-sensitive enteropathy (GSE); both conditions are characterized by the development of IgA autoantibodies against transglutaminases that, in the case of dermatitis herpetiformis, are deposited in the superficial papillary dermis. Therapy involves strict gluten avoidance and the use of sulphonamide drugs such as dapsone.[1][2][3][4][5]

The factors which can cause dermatitis herpetiformis include the following:

First degree relatives of patients with GSE or dermatitis herpetiformis are characteristically more likely to be affected by one or other disorder. Thus family screening may be indicated. Monozygotic twins have a disease concordance rate of over 0.9.

The principal environmental factor involved in the pathogenesis of the disease is dietary gluten and its constituent gliadin. Interestingly, tissue transglutaminase (tTG) is responsible for the modification of gliadin in the gut mucosa into a more immunogenic form. Other environmental factors causing dermatitis herpetiformis include iodine exposure (which can precipitate flares of the disease) and tobacco smoking (which can improve the condition).

It is most common in people of northern European descent, where prevalence ranges from 1.2 to 39.2 per 100,000 people and an incidence range of 0.4-2.6 per 100,000 people per year. A recent large population-based study from the UK suggests that, although the incidence of GSE increased over the period 1990 to 2011, the incidence of dermatitis herpetiformis fell from 1.8 per 100,000 to 0.8 per 100,000 person-years over the same period. Seemingly, patients with dermatitis herpetiformis seem to have lower age-adjusted mortality than expected, possibly as a result of the modifications required to their diet as a result of the disease.

Onset is commonly in adult life, typically in the fourth decade, though cases have been reported in children and elderly people.

Multiple studies show that the disease is more common in men than women, with a male to female ratio of 1.5-2: 1.

This is a disease of people of northern European descent and is most uncommon in Asian and African populations, though a few cases have been reported. The incidence and prevalence of the disease are similar in North American populations of European descent to those seen in northern Europe, suggesting that genetic factors are important in disease susceptibility. Asian patients with dermatitis herpetiformis tend to have a distinct fibrillar pattern of IgA deposition in the skin, and there is a very rare association with GSE.

The pathology in dermatitis herpetiformis and GSE results from an IgA dominant autoimmune response to transglutaminase molecules. In GSE, the principal target is tissue transglutaminase, whereas in dermatitis herpetiformis there is increasing evidence that epidermal transglutaminase 3 (TG3) may be the dominant antigen. Both proteins have significant homologies in their enzymatic domains and are expressed in normal epidermis, where TG3 is important in cross-linking and maintenance of the cornified envelope.

The series of events that result in inflammation and itch in dermatitis herpetiformis remains to be fully elucidated. Hypotheses include the release of TG3 from keratinocytes into the papillary dermis, where it can bind circulating IgA antibodies, or that circulating complexes of TG3 and IgA are deposited in the skin.[6][7]

The histopathology of an intact vesicle in dermatitis herpetiformis demonstrates subepidermal blister formation with neutrophils located at the tips of the dermal papillae. There is frequently perivascular inflammatory cell infiltrate. Because vesicles may not survive the pruritis, clefting within the lamina lucida may not be seen.

The principal symptom of patients with dermatitis herpetiformis is an itch. Patients report a rash, most typically over the extensor surfaces of the elbows, knees, buttocks, and scalp. There also may be symptoms of associated disorders, such as GSE, with bloating, diarrhea and other gastrointestinal complaints or of other autoimmune diseases including hypothyroidism.

The characteristic lesions of dermatitis herpetiformis are grouped erythematous papules and vesicles located over extensor sites. Because the condition is so pruritic, intact vesicles are rarely seen and the patient may simply present with excoriations. Lesions tend to be symmetrical and heal without scarring. Patients may develop punctate purpura on the palms and soles. Mucosal change may occur, and dental abnormalities have been reported, particularly enamel pits. Interestingly, first-degree relatives of a patient with GSE may also show enamel defects.

The diagnosis of dermatitis herpetiformis is made by the presence of characteristic clinical features, histopathology, direct immunofluorescence testing, and serology.

Direct immunofluorescence samples are best taken from the perilesional skin, as characteristic changes may be lost in lesional tissue. The diagnostic finding is that of deposition of IgA in the papillary dermis in a granular or fibrillar pattern. The latter has been particularly associated with dermatitis herpetiformis in Asian patients. Complement 3 also may be found in association with the IgA deposits.

The cornerstone of long-term dermatitis herpetiformis management is strict adherence to a gluten-free diet. Not only does this improve skin changes over time, but it is also essential in the management of associated GSE. Patients are best managed in consultation with an experienced dietitian who will be able to provide appropriate support, as maintenance of a strict gluten-free diet can be challenging.[1][8][9][10]

Because of the slow response to a gluten-free diet, most patients with dermatitis herpetiformis require pharmacological intervention to control their disease in the short to medium term. Dapsone and related sulphonamide drugs have proven highly effective, often suppressing pruritis within days of initiation of treatment.

The mechanism of action of dapsone in dermatitis herpetiformis is through its effects on neutrophil function and recruitment. The drug is typically used at doses of 25 to 150 mg daily. Hematological side effects may occur including hemolysis, methemoglobinemia, and agranulocytosis. Consequently, patients require regular blood monitoring, particularly in the early stages of treatment. Non-hematological adverse effects include a severe drug sensitivity reaction (dapsone hypersensitivity syndrome) and peripheral neuropathy. Patients with a glucose-6-phosphate deficiency (G6PD) are more prone to adverse effects of dapsone, and G6PD activity should be checked before treatment. Concurrent administration of Cimetidine via inhibition of cytochrome p-450 has been shown to decrease the adverse effects of dapsone.

Other sulphonamide drugs have utility in dermatitis herpetiformis, including sulphamethoxypyridazine, sulphapyridine, and sulphasalazine. They may be of utility in patients intolerant of dapsone. Systemic corticosteroids are of little benefit, though potent topical corticosteroids may be of use in the short term to lessen pruritis.

The differential diagnosis of dermatitis herpetiformis includes many pruritic and vesiculobullous disorders such as:

Because of the often non-specific nature of dermatitis herpetiformis lesions, skin biopsy for direct IF should be considered in the investigation of patients with unexplained or treatment-refractory pruritic rashes.

Dermatitis herpetiformis is a chronic disease that requires patients to adopt a long-term gluten-free diet. Those who are able to do this and respond, seem to have excellent long-term survival and can decrease or discontinue dapsone treatment. Recent data suggest that patients with GSE who do not respond to a gluten-free diet do poorly. While the disease is a chronic one, remission is recognized and seems to be more common in adult patients over the age of 40.

The principal complications and co-morbidities of dermatitis herpetiformis relate to GSE and the associated risk of small bowel lymphoma. GSE may lead to malabsorption, resulting in anemia, weight loss, and osteoporosis. In children, short stature is a consequence. Rarely, dermatitis herpetiformis may be associated with neurological diseases such as ataxia and neuropathy.

The management of dermatitis herpetiformis is complex and requires an interprofessional team that includes a dermatologist, dietitian, gastroenterologist, nurse practitioner and a neurologist.

The cornerstone of long-term dermatitis herpetiformis management is strict adherence to a gluten-free diet. Not only does this improve skin changes over time, but it is also essential in the management of associated GSE. Patients are best managed in consultation with an experienced dietitian who will be able to provide appropriate support, as maintenance of a strict gluten-free diet can be challenging. For patients who adhere to the dietary restriction, the prognosis is good but will still be marked by multiple relapses and remissions. For those who do not adhere to the diet the prognosis is poor and the quality of life is abysmal.[11][12] 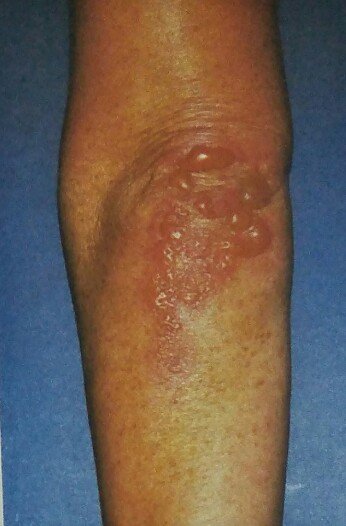 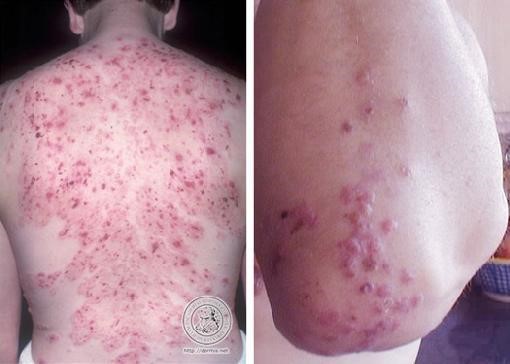 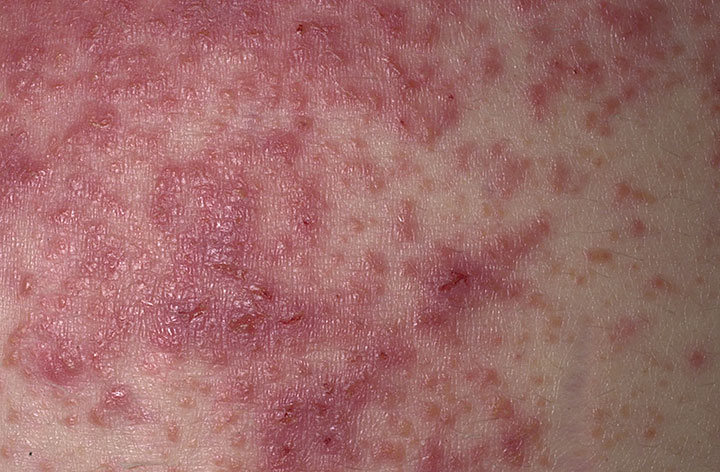