Epithelial neoplasms of the ovary account for 60 percent of all ovarian tumors and 40 percent of benign tumors. They are classified as benign, borderline, or malignant tumors. Ovarian cystadenomas are common benign epithelial neoplasms that carry an excellent prognosis. This activity reviews the cause and pathophysiology of ovarian cystadenoma and the role of the interprofessional team in management.

The association of mucinous cystadenomas with dermoid cysts indicates that some are of germ cell origin and an association with Brenner tumors implies a surface epithelial origin for another subset.[3] KRAS mutations are present in up to 58% of cases.[4]

Morphological and molecular genetic studies have implicated endometriotic cysts and endometriosis in the development of endometrioid, clear cell, and seromucinous tumors.

According to some authors, seromucinous cystadenomas likely derive from endometriosis.[5]

Benign serous tumors of the ovary represent 16% of all ovarian epithelial neoplasms and account for two-thirds of benign ovarian epithelial tumors and the majority of serous ovarian tumors. They occur in adults of all ages, with reported mean ages differing from 40 to 60 years.[6] They are bilateral in 10 to 20% of the cases.

Endometrioid epithelial tumors account for 2 to 4% of all ovarian tumors. They usually occur in the fourth and fifth decades.[8] Endometrioid tumors often correlate with endometriosis.

Seromucinous cystadenoma occurs in adults with a peak in the late reproductive age group.[10]

Serous cystadenoma ranges in size from 1 to more than 30 cm in greatest dimension (mean = 10 cm). They have a smooth outer surface and contain one or more thin-walled cysts filled with clear, watery fluid.[6] Serous cystadenomas are usually unilocular but may be multilocular.

Serous cystadenomas are composed of cysts and papillae lined by non-stratified or stratified cuboidal to columnar cells resembling fallopian tube epithelium.[6] Usually, there is no or minimal atypia.

The immunohistochemical profile of serous cystadenoma is similar to that of normal ovarian surface epithelium and tubal epithelium. In addition to positivity with most commonly used epithelial markers, p63 is positive in most cases.[11]

Mucinous cystadenomas have a smooth surface and are usually multilocular and sometimes unilocular. They range in size from a few centimeters to greater than 30 cm; with a mean of 10 cm.

Mucinous cystadenoma is composed of multiple cysts and glands lined by simple non-stratified mucinous epithelium resembling gastric foveolar-type or intestinal epithelium containing goblet cells and sometimes neuroendocrine cells or Paneth cells.  The ovarian stroma may be cellular with areas of stromal luteinization. There are no cytologic atypia and no mitotic figures.

Macroscopic findings: the cysts range in size up to 15 cm. The cyst lining is irregular with areas of hemorrhage. The cyst contents are typically dark brown due to old hemorrhage (chocolate cyst).

Histopathology: the rare endometrioid cystadenomas are similar to endometriotic cysts but lack endometrial stroma, hemosiderin-laden macrophages, and a myofibroblastic wall. There are no cytologic atypia and no mitotic figures.

Clear cell cystadenoma ranges in size from 3 to 16 cm. It has a smooth, lobulated external surface.

Clear cell cystadenoma is composed of glands or cysts lined by cuboidal to flattened cells with clear or eosinophilic cytoplasm embedded in a fibromatous stroma. There are no cytologic atypia and no mitotic figures.

Grossly, seromucinous cystadenomas present as a unilocular cyst with a smooth surface and inner lining. They may contain serous or mucinous fluid.

Histologically, the cysts are lined by a variable admixture of serous and mucinous cells (endocervical-type) but endometrial and less often transitional or squamous cells may be in evidence. If present, the stroma is bland and fibromatous.

Ovarian cystadenomas ranging in size from 1 to 3 cm are usually incidental findings and reveal themselves during an ultrasound investigation of another gynecologic disorder.[12]

The symptoms and signs associated with large tumors are nonspecific and most commonly include[6]:

Serum CA-125 assay is a useful tool that helps to distinguish between benign and malignant ovarian masses. The combination of normal findings at serum CA-125 assay, imaging, and clinical findings exclude the possibility of ovarian cancer.[12]

Several imaging techniques are useful for the diagnosis of ovarian cystadenomas. They include[13][12]:

The features that are more suggestive of a benign cystic neoplasm include[12]:

The cell type of cystadenomas cannot be determined based on imaging findings.

The initial imaging study recommended in the evaluation of adnexal masses is the pelvic US. The transabdominal US or the endo-vaginal US should is the study of choice to evaluate ovarian masses.[12]

Although CT is a useful imaging technique in diagnosing adnexal masses, it is sometimes of limited value.[12]

The definitive diagnosis of ovarian cystadenomas is based on histopathological examination of the surgical specimen.

The management of ovarian cystadenomas depends on the following factors[14]

Unilateral salpingo-oophorectomy or ovarian cystectomy is the adequate treatment of ovarian cystadenomas.

Clinical recurrence is uncommon and reflects either incomplete resection or a new primary tumor.

Serous cystadenomas are benign lesions, but they may occasionally recur after cystectomy.[13]

Mucnous cystadenomas are benign. However, recurrences may be seen in cases treated with cystectomy.[7]

Endometrioid cystadenomas are benign lesions which carry an excellent prognosis.  Although these tumors do, rarely recur.

Clear cell cystadenoma is a benign cyst with an excellent prognosis.

Cystadenomas of the ovary are benign lesions that rarely recur after incomplete resection.

Rare complications of ovarian cystadenomas include:

There is a risk of development of pseudomyxoma peritonei if a mucinous cystadenoma ruptures.

Ovarian cystadenomas are benign tumors which carry an excellent prognosis. They are ideally managed by an interprofessional team that consists of gynecologists, radiologists, and pathologists. 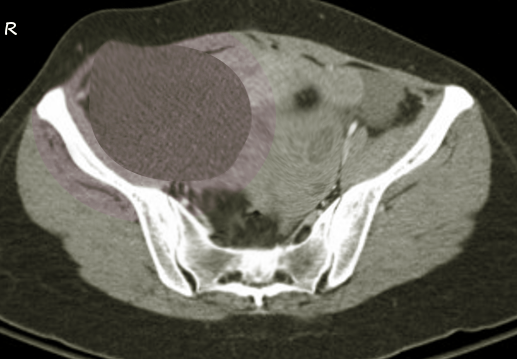 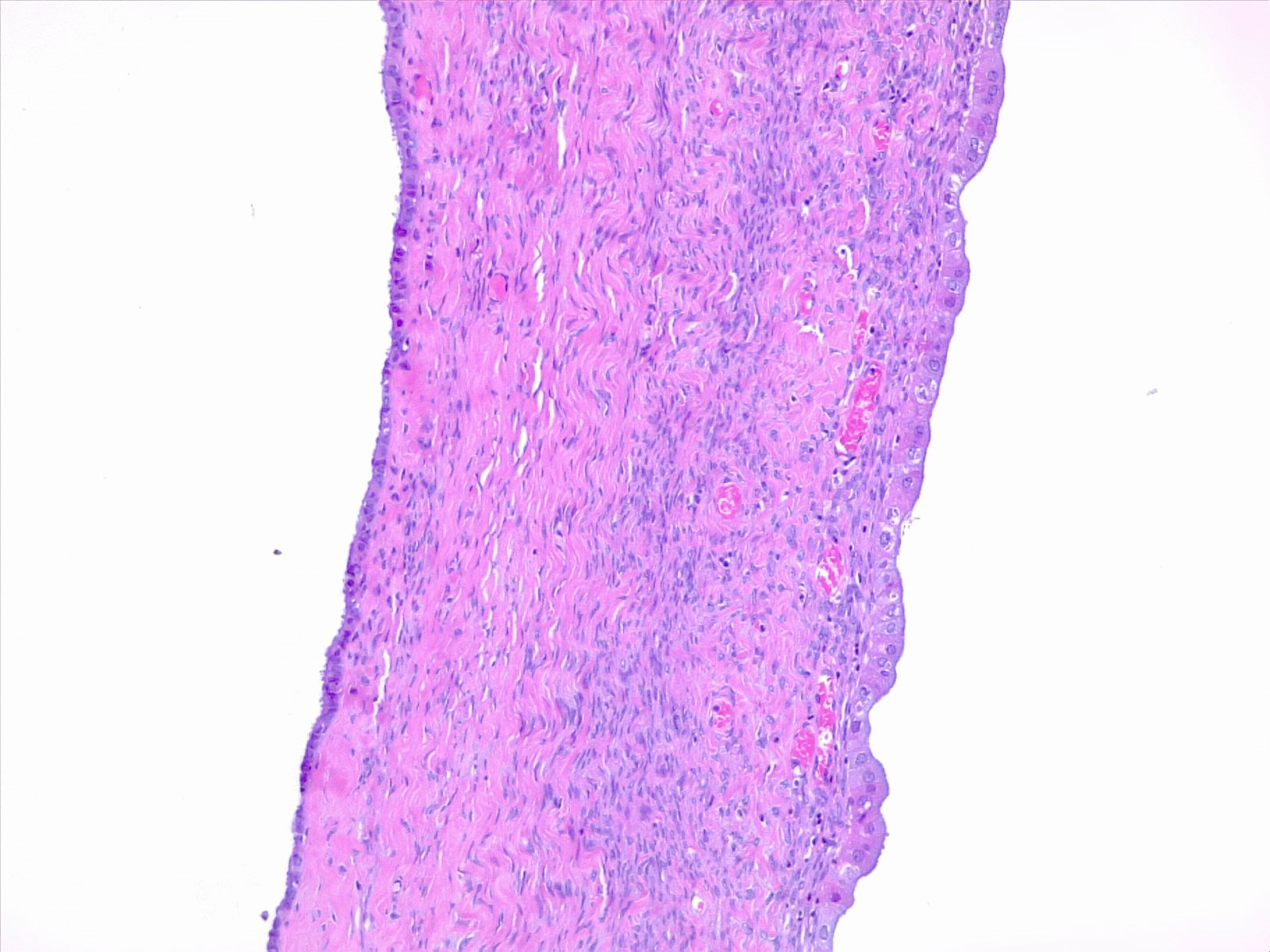 Seidman JD,Khedmati F, Exploring the histogenesis of ovarian mucinous and transitional cell (Brenner) neoplasms and their relationship with Walthard cell nests: a study of 120 tumors. Archives of pathology     [PubMed PMID: 18976011]

Bell DA,Scully RE, Atypical and borderline endometrioid adenofibromas of the ovary. A report of 27 cases. The American journal of surgical pathology. 1985 Mar;     [PubMed PMID: 3993832]