The Cushing reflex (vasopressor response, Cushing reaction, Cushing effect, and Cushing phenomenon) is a physiological nervous system response to acute elevations of intracranial pressure (ICP), resulting in Cushing’s triad of widened pulse pressure (increasing systolic, decreasing diastolic), bradycardia, and irregular respirations. The Cushing reflex was proposed in 1901 by Dr. Harvey Cushing. He believed that the dramatic increase in blood pressure was a reflex to brainstem ischemia seen in patients with increasing ICP from causes such as intracranial hemorrhage, a mass effect from a tumor, and cerebral edema, to name a few. In cases of increased ICP, cerebral perfusion pressure (CPP) drops as the systolic blood pressure cannot overcome the resistance present in the brain. CPP is the pressure that pushes blood through the cerebrovascular network and is defined by the difference between mean arterial pressure (MAP) and intracranial pressure (ICP).[1]

Intracranial pressure and cerebral blood flow are determined by the amount of blood and cerebrospinal fluid (CSF) in the skull and the force exerted by the brain on the inside of the skull. As necessary, autoregulatory mechanisms enable the CSF movement between the brain and spinal subarachnoid space and constriction and dilation of arterioles to maintain ICP within a normal range (5 mmHg to 15 mmHg). Although daily activities such as breathing, coughing, and lifting can cause transient pressure, autoregulatory mechanisms can respond to such changes (so long as mean arterial pressure (MAP) remains between 50 mmHg to 150 mmHg) and maintain ICP within a normal range.

The Cushing reflex is a physiological nervous system response to acute elevations of intracranial pressure (ICP), resulting in the Cushing triad of widened pulse pressure (increasing systolic, decreasing diastolic) bradycardia, and irregular respirations. In the first stage of the Cushing reflex, blood pressure and heart rate rise in response to sympathetic activation to overcome increases in ICP.[3] This sympathetic response allows for brain perfusion as long as the ICP is not too high to overcome. For the brain to remain adequately perfused, mean arterial pressure (MAP) must be maintained higher than ICP. In the second stage of the Cushing reflex, hypertension continues to be present, but the patient becomes bradycardic rather than tachycardic. There are differing opinions on the mechanisms leading to this stage of the Cushing reflex. The prior thinking was that increased blood pressures lead to activation of baroreceptors in the aortic arch, triggering parasympathetic activation and resultant bradycardia. Tsai et al. proposed that chemoreceptors outside the brain do not participate in this stage, and bradycardia actually results from compression of the intracranial vagal nerve.[4][5][6]

It is still not wholly agreed upon as to what causes bradycardia, but there is now a wide acceptance that this is a late-stage and likely terminal sign of worsening intracranial pathology. Blood pressure will continue to rise until the MAP overcomes the ICP, and blood can adequately perfuse the brain, thereby resolving hypoxia and avoiding infarction. In the later stages of the Cushing reflex, brainstem dysfunction secondary to increased ICP, tachycardia, or bradycardia is observable clinically as an irregularity in breathing; this is characterized initially by shallow breaths with occasional periods of apnea. This activity occurs due to compression of the brainstem by increased ICP, and as a result, distortion of the respiratory centers.[4] Eventually, agonal breathing may develop as herniation of the brain begins, progressing to respiratory and cardiac arrest. Overall, it seems that the Cushing reflex is the very last hemodynamic response to a systemic sympathetic activation that follows the acute rise in ICP.[7]

As a result of the Cushing reflex, the Cushing triad is typically observed in the later stages of acute head injury. Although the reflex is a homeostatic response by the body in an attempt to rescue under-perfused brain tissues, the Cushing triad is, unfortunately, a late sign of increasing ICP and indicative that brainstem herniation is imminent. Patients who present to the emergency department with concerns for increased ICP and two of three signs of the Cushing reflex have been found to have almost two-fold higher mortality than patients with normal and stable vital signs. It is, therefore, important to recognize early signs of elevated ICP (e.g., a headache, nausea, vomiting, altered level of consciousness) to intervene as early as possible.[8] Many clinicians use the presence of bradycardia and hypertension as an indication of increased ICP; however, this signals a late-stage Cushing reflex that carries a poor prognosis for the patient. Moving into the future, it may be wise to look for the presence of tachycardia and hypertension in patients with suspected intracranial pathology so that interventions can start promptly.[9]

Cushing reflex is most usually an irreversible condition with a terminal prognosis for the patient. Initial emergency treatments aim to lower the ICP rapidly and include: Elevation of the patient’s head 30 to 45 degrees, mannitol and/or furosemide, which act as an osmotic diuretic, induced hyperventilation, steroids, or cerebrospinal fluid drainage.[10]

The nurses looking after the neurosurgical patient in the ward or intensive care unit should be aware of the Cushing reflex, and they should bring any abnormal findings to the immediate attention of the attending and other clinicians. 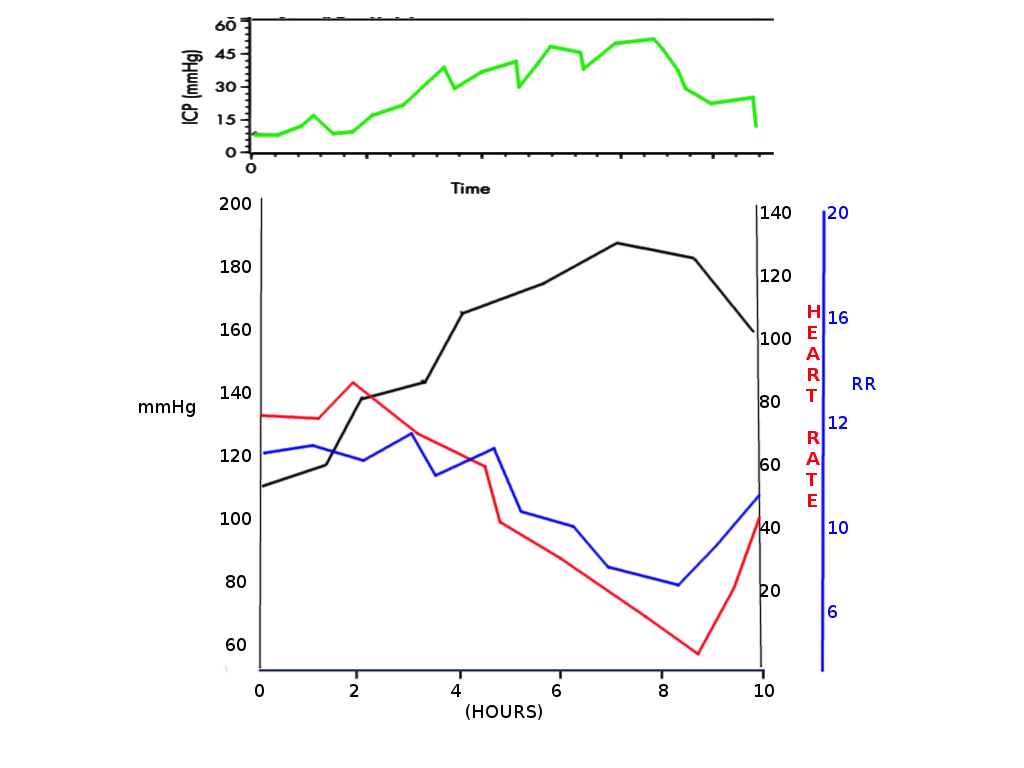 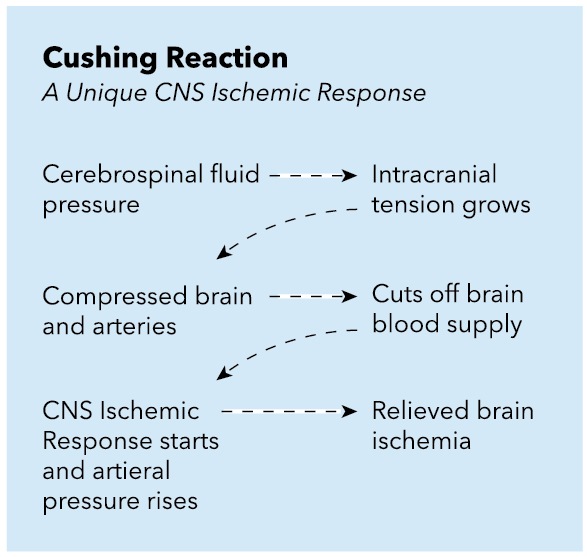 Wan WH,Ang BT,Wang E, The Cushing Response: a case for a review of its role as a physiological reflex. Journal of clinical neuroscience : official journal of the Neurosurgical Society of Australasia. 2008 Mar;     [PubMed PMID: 18182296]