Today, the emergency cricothyroidotomy is the surgical rescue technique of choice for the failed airway in adults. It is considered a more straightforward procedure than the tracheostomy. This activity describes the indications, contraindications, and technique involved in performing a cricothyroidotomy and highlights the role of the interprofessional team in ensuring airway access in difficult patients.

The surgical airway is not a new concept in the world of medicine.  Ancient Egyptian hieroglyphics display images indicating that surgeons may have performed this procedure thousands of years ago. In 100 B.C., Asclepiades of Bithynia completed the first documented, elective surgical airway. In 1546, Antonio Mus Brassavola was the first to record a successful surgical airway, and Thomas Fienus first coined the term “tracheotomy” in 1649.[1]

Despite 5,000 years of history, the surgical airway was not a formal surgical technique until 1909, when Dr. Chevalier Jackson, a laryngologist at Jefferson Medical School in Philadelphia, detailed a procedure he called the “high tracheostomy.”[2] The high tracheostomy was utilized for inflammatory processes such as diphtheria.[3] However, Dr. Jackson later condemned his own procedure, having reviewed nearly 200 cases of tracheal stenosis secondary to cricothyrotomy and the cricothyrotomy fell out of favor.[4]

It wasn’t until the 1970s that the cricothyrotomy returned to mainstream practice when physicians Brantigan and Grow published a low complication rate on a series of 655 patients undergoing elective cricothyrotomy. In this review, they showed a low complication rate in 655 patients undergoing elective cricothyrotomy for prolonged mechanical ventilation, with only 0.01% of patients developing subglottic stenosis.[2][5] Today, the emergency cricothyrotomy is now the surgical rescue technique of choice for the failed airway in adults. It is considered a more straightforward procedure than the tracheostomy.[1]  Brantigan and Grow ultimately concluded that the cricothyroidotomy is a benign, well-tolerated procedure.

Over the last 100 years, several techniques have been described to obtain airway control via the cricothyroid membrane. There are essentially three separate techniques that ultimately arrive at a controlled airway and are in use today.

For the rest of this article, when speaking of emergent cricothyroidotomy in the “cannot intubate, cannot oxygenate” (CICO) situation, we will discuss the scalpel-finger-bougie technique.

The emergency cricothyrotomy is indicated in any CICO scenario. Some situations in which a physician may encounter CICO include [8]:

In the CICO situation, there are no absolute contraindications to emergent cricothyrotomy.

Relative contraindications include possible or known tracheal surgery, fractured larynx, laryngotracheal disruption, and children. Patients with an acute laryngeal disease may have a higher rate of subglottic stenosis, making elective cricothyrotomy relatively contraindicated.[9] Cricothyrotomy is a relative contraindication in children less than 5-12 years because of the funnel shape of the pediatric airway and a theoretically increased risk of subglottic stenosis.[10]

Often the most significant barriers to a surgical airway are cognitive. The emergent cricothyrotomy is no more complicated than placing a chest tube or other, routine emergency procedure.  However, the terms "failed airway" and "cannot intubate, cannot oxygenate" may be correlated with personal failure in the physician's mind, leading to an inappropriate delay in the decision to cut the neck. Regular practice on simulators or cadavers is necessary to become familiar with the technique will help to reduce the anxiety associated with the procedure when it becomes clinically necessary.  Before any intubation, especially a potential "difficult airway," a physician should go through a difficult airway algorithm, reducing both the anxiety and difficulty of the final step in that pathway, the emergent cricothyrotomy. The airway plan, from intubation medications to the stops following a failed intubation attempt should be verbalized out loud to members of the healthcare team.  The physician should identify critical neck anatomy and landmarks in case a cricothyrotomy becomes necessary.  Finally, all equipment should be readily available at the bedside.[11]

The literature describes several techniques, including many tools, dilators, or specialized cannulas to obtain tracheal access.  It is the author's belief, and the belief of many within the Emergency Medicine/Critical Care community, that the bougie-aided cricothyroidotomy, also known as the "Three-Step Method" combines the most important steps in both the Seldinger technique and the "rapid four-step" surgical approach, providing a simple technique to maximize success in this rarely performed, high-stress situation.[12]

The emergency cricothyrotomy is the last step in the CICO algorithm and is a step taken to save the life of a patient.  Therefore, it is a procedure in which the benefit drastically outweighs the risk. However, the procedure is not without complications. Complication rates differ from study to study, based on the clinical scenario, level of training, or location of procedure, ranging from 0% to as high as 54%. The most common complication is bleeding.  Bleeding is expected and should be ignored during the procedure. If severe bleeding occurs, pressure or packing at the site should provide control. Other immediate complications include lacerations of tracheal cartilage, including the thyroid, cricoid, or tracheal rings, perforation of the trachea, creation of a false tract (passage of the ET tube into a potential space other than the trachea), and infection.[16][17]  Long-term complications include subglottic stenosis and voice changes.[18]

The cricothyrotomy is the final step in the difficult airway algorithm when a provider encounters a CICO scenario.

Being prepared to perform what is a manually simple but cognitively difficult procedure can be the difference between life and death for a patient that requires an emergent airway.

The emergent cricothyroidotomy is not a difficult procedure from a technical standpoint.  However, from a cognitive standpoint, it may be prohibitive to the unprepared team.  To perform this procedure successfully, it must involve an interprofessional team that includes physicians, nurses, and respiratory therapists.  Before attempting intubation in a presumed difficult airway, the physician should announce to everyone involved in patient care that there is a potential need for emergent cricothyroidotomy.  Often, this may involve marking of landmarks on the patient's neck.  By announcing the potential for cricothyroidotomy, it eliminates the cognitive barriers before the procedure even becomes required.

The American College of Surgeons recommends the emergent cricothyroidotomy as the airway of choice in the can't intubate, can't ventilate situation.  As per the Advanced Trauma Life Support guidelines, the "...surgical cricothyroidotomy is preferable to a tracheostomy for most patients who require the establishment of an emergency surgical airway, because it is easier to perform, associated with less bleeding, and requires less time to perform than an emergency tracheostomy." 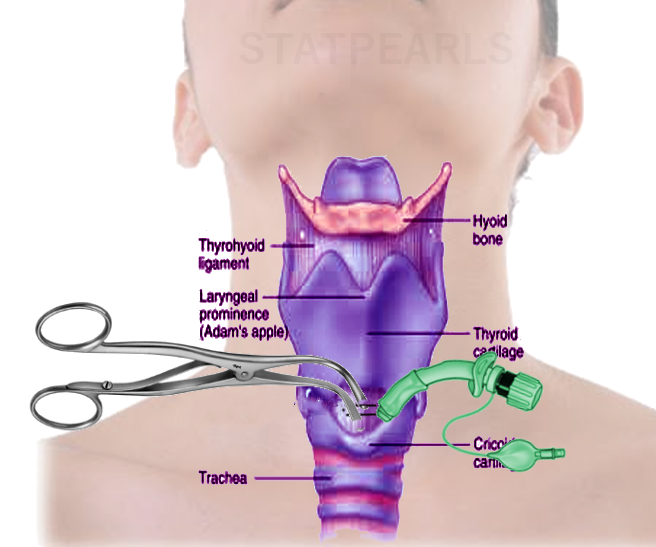 Aminov RI, A brief history of the antibiotic era: lessons learned and challenges for the future. Frontiers in microbiology. 2010     [PubMed PMID: 21687759]