The nervous system is a complex network that enables an organism to interact with its surroundings. Sensory components that detect environmental stimuli, and motor components that provide skeletal, cardiac, and smooth muscle control, as well as control of glandular secretions, are coordinated in a system to compel appropriate motor responses to the stimuli or sensory inputs that have been received, stored, and processed.

The nervous system is made up of vast neural networks; signaling within these circuits enables thinking, language, feeling, learning, memory, and all function and sensation.  It is well-established that through the plasticity of existing cells our nervous systems can adapt to situations not previously encountered, but it also has been shown that neural stem cells (NSCs) are plastic and involved in creating new connections in adaptation and response to injury. NSCs play a fundamental role in development, and in the ability to respond to stimuli in the environment and injury.[1][2]

The nervous system can be divided into the peripheral and central nervous systems (PNS and CNS respectively). The brain is divided into four main parts: (1) the brain stem, consisting of the medulla, pons, and midbrain; (2) the cerebellum; (3) the diencephalon, with the thalamus and hypothalamus; and (4) the cerebral hemispheres, comprised of the cerebral cortex, basal ganglia, white matter, hippocampi, and amygdalae.

Cranial nerves III—XII arise from the brainstem, and provide sensory innervation to the head and neck, with some extension of function into the region of the trapezius muscle through the spinal accessory nerve. The medulla is a rostral continuation of the spinal cord and contains autonomic centers that control vital functions and systems involved in breathing and the maintenance of appropriate blood pressure. These centers also regulate diaphragmatic and pharyngeal reflexes. The pons is located between the medulla and midbrain and contributes to the maintenance of posture and balance, and breathing. The pons carries information from the cerebrum to the cerebellum through the corticopontocerebellar tract. The midbrain is the most rostral portion of the brainstem and is involved in ocular movement as well as visual and auditory relay pathways via the lateral geniculate nuclei and the medial geniculate nuclei respectively.

The cerebellum lies in the posterior fossa and coordinates head and eye movements, the planning and execution of movement, and the maintenance of posture. In addition to its well-established role in motor function, the cerebellum has been shown to be a critical component of many cognitive and sensory-motor processes, including auditory pathways involved in functions such as speech recognition.

The thalamus and hypothalamus are located between the cerebral hemispheres and the brain stem. The thalamus is a major processing region for sensory information going to the cerebral cortex and motor information traveling in the opposite direction toward the brainstem and spinal cord. The hypothalamus controls pituitary gland secretions by secreting hormones into the hypophysial portal blood that either stimulate or inhibit the release of anterior pituitary hormones. The secretions of the posterior pituitary, which include antidiuretic hormone and oxytocin, are also controlled by cell bodies located in the hypothalamus.

The basal ganglia or basal nuclei include the putamen, caudate, globus pallidus, ventral striatum, ventral pallidum, substantia nigra, and subthalamic nucleus. These nuclei receive input from nearly the entire neocortex and then project through basal ganglia-thalamocortical circuits to a relatively small part of the frontal lobe to aid in movement regulation. The hippocampus primarily is involved with memory, and the amygdala processes emotional information into effects on the autonomic system through the hypothalamus and hormone secretion. The cerebral cortex is largely involved in perception and higher motor function through the processing of sensory information and the integration of motor functions. The cortex contains primary, secondary, and tertiary sensory and motor areas. Cortical function centers around its ability to integrate diverse signals and provide direction in response.

The spinal cord is the caudal extension of the CNS. The spinal cord is segmented, as is the spinal column, and projects 31 pairs of spinal nerves (with afferent and efferent components).  There are eight pairs of cervical spinal nerves, 12 pairs of thoracic nerves, five pairs of lumbar nerves, five pairs of sacral nerves, and one pair of coccygeal nerves. The afferent nerves comprise the sensory nerves and carry information from the skin, joints, muscles, and visceral organs; while the efferent nerves comprise the motor nerves, both somatic and autonomic, and innervate skeletal, cardiac, and smooth muscle, as well as glandular tissue and secretory cells. The spinal cord is responsible for transmitting signals between the periphery and the rest of the CNS through both ascending and descending pathways.  Due to unequal growth during development, the spinal cord is shorter than the spinal column, with the cell bodies of the spinal nerves ending around the level of L1/L2 at the conus medullaris. A structure called the cauda equina, which consists of spinal nerves L2 through C1, continues caudally in the lumbar cistern ( subarachnoid space) as the spinal nerves leave the spinal column at their respective levels. This subarachnoid space devoid of the spinal cord enables the safe performance of lumbar punctures typically between the vertebral bodies of L3 and L4, or L4 and L5.

Impulse transmission throughout the nervous system is conducted via neurons employing synaptic connections. Consequently, there are both electrical and chemical components involved in signal transmission. A variety of neurotransmitters are used in various synapses, neuroeffector, and neuromuscular junctions; examples include acetylcholine, norepinephrine, dopamine, serotonin, glutamate, gamma-aminobutyric acid (GABA), neuropeptides, hormones, and even nitric oxide. Ion concentrations also play a significant role in impulse generation and conduction. It is of consequent importance that healthy ion balances be maintained by using active transport. The heavy use of Na+/K+-ATPase accounts for the neural demand for glucose. It has also been shown that calcium is necessary for excitation at neuromuscular junctions and ganglionic synapses and that magnesium inhibits excitability.[3][4][5][6][7][8][9][10][11][12][13]

The specialty involved in the surgery of pathologies involving the CNS is neurosurgery.

Many neurological conditions affect the CNS. They range dramatically in scope, impact, and nature of the effect. Some conditions can lead to progressively impaired movement such as in Parkinson disease. Huntington chorea and hemiballismus cause excessive movement among other symptoms. The demyelination in multiple sclerosis can cause acute attacks, and over time, chronic degradation of function. Others may impact cognition such as the various dementias. Epilepsy can cause uncontrolled excitation. Headaches often impair the daily function of patients. Traumatic injuries can cause plegia or paresis and may result in any number of deficits depending on the location and extent of the lesion.[15] 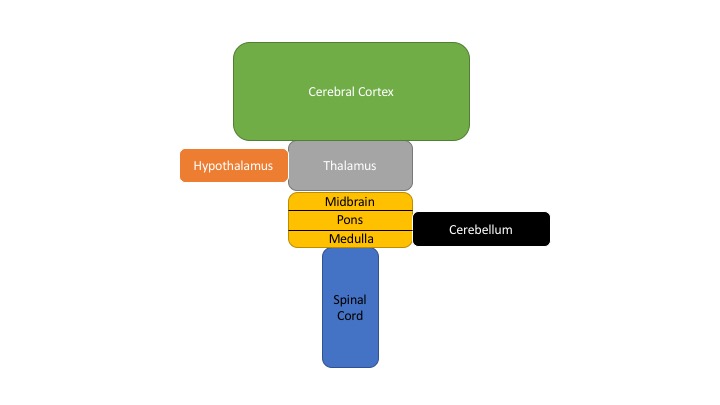 Human amnesia and the medial temporal region: enduring memory impairment following a bilateral lesion limited to field CA1 of the hippocampus., Zola-Morgan S,Squire LR,Amaral DG,, The Journal of neuroscience : the official journal of the Society for Neuroscience, 1986 Oct     [PubMed PMID: 3760943]