Carnitine (beta-hydroxy-gamma-trimethylammonium butyrate) is an indispensable water-soluble molecule derived from amino acids.[1][2] In non-vegetarians, dietary intake is the primary source of carnitine and accounts for almost three-fourths of the total body stores.[3] The main dietary source of carnitine is red meat, poultry, and dairy products.[4] The bioavailability of dietary carnitine is between 54% to 87%.[5] The remaining one-fourth of the carnitine pool can be produced endogenously from lysine and methionine mostly by the liver and kidneys.[3][6] Vegetarians have a relatively lower plasma carnitine level than non-vegetarians.[7] In strict vegetarians, most of the carnitine (>90%) is produced endogenously.[3] Despite variabilities in dietary carnitine intake, the plasma carnitine level is maintained within the normal range by an efficient renal reabsorption system while excessive carnitine is promptly excreted in the urine.[8] About 90% to 99% of the filtered carnitine is usually reabsorbed by the renal tubules.[3]

Carnitine plays a substantial physiological role in lipid metabolism and intermediary metabolic pathways.[5] Through the carnitine shuttle, carnitine helps in transporting the long-chain fatty acids from the cytoplasm to the mitochondrial matrix for subsequent degradation for beta-oxidation, which is detailed in the pathophysiology section (figure).[3] Plasma carnitine accounts for approximately 0.5% of the total body stores, and the remaining vast majority is found within the cells.[3][5] As carnitine is essential for fueling the exercising muscle through fatty acid oxidation and energy production via the Krebs’s cycle, more than 95% of total body carnitine is found in skeletal muscle.[5][7][9] The liver, heart, and kidneys have the rest of the carnitine stores.[5]

The incidence of Primary carnitine deficiency is different based on ethnicity. The frequency of PCD varies between countries. In the U.S, the incidence is approximately 1: 142,000 based on newborn screening data.[10] In Japan, the incidence is approximately 1 in 40,000.[11] The Faroe Islands, an archipelago in the North Atlantic, report the highest incidence of PCD, which is 1 in 300.[12] Some patients with PCD have no or minimal symptoms, and this milder phenotype may remain undiagnosed throughout their entire life. Consequently, it is challenging to ascertain the exact prevalence of all PCD phenotypes.[13] The PCD distribution across the gender is expected to be equal as it is inherited in AR fashion. However, many women are diagnosed with PCD shortly after giving birth, following their infants being detected with low carnitine levels during newborn screening. Also, females may have more frequent clinical manifestations, especially given the stress of pregnancy.[14]

In carnitine deficient states, LCFAs cannot be effectively transported to the mitochondria matrix for oxidation and subsequent utilization in Kreb’s cycle and ketone body production. During periods of fasting, improper utilization of fatty acids impairs gluconeogenesis and characteristically leads to nonketotic or hypoketotic (no or minimal ketone body production respectively) hypoglycemia.[3] When fatty acid oxidation is impaired, glucose is readily consumed without replenishment from gluconeogenesis.[6] In carnitine deficiency states, various intermediary metabolic pathways such as Kreb's cycle, amino acid metabolism, and beta-oxidation of fatty acids are also affected. Fatty acids released from adipose tissues during fasting accumulate in various organs predisposing to their impaired function.[5][6] Accumulation of fat in the liver causes steatosis and impairment of ketone body production.[5][6][8] In the heart and skeletal muscles, this abnormal accumulation results in cardiomyopathy and myopathy respectively.[5][6] Heart derives two-thirds of its energy from free fatty acids and this predisposes patients with impaired carnitine metabolism to the development of cardiomyopathy.[6] Additionally, impaired lipid metabolism can affect the electrical rhythm of the heart resulting in arrhythmias.[6] The brain utilizes ketone bodies as an alternate energy source in fasting states. These ketones are derived from acetyl-CoA from fatty acid oxidation and in carnitine deficiency, this is defective.[6] Unstable energy and metabolic abnormalities can impair brain function with loss of consciousness and metabolic encephalopathy.[6][17]

The presentation of Primary carnitine deficiency is variable between patients in terms of severity.[3] The clinical manifestations and severity of symptoms of PCD can vary based on the age of onset and the involved organ systems. About half of the affected individuals present at a younger age, between three months and two years, with attacks of metabolic decompensation in a form of hepatic encephalopathy characterized by poor feeding, lethargy, and irritability. The attacks occur particularly during periods of catabolism when fatty acids oxidation and gluconeogenesis are mostly needed e.g. fasting or during common illnesses such as acute gastroenteritis.[3] These attacks are associated with hepatomegaly, nonketotic or hypoketotic hypoglycemia, lactic acidosis, hyperammonemia, and elevated hepatic enzymes (alanine aminotransferases and aspartate aminotransferases).[3]

Hyperammonemia occurs due to reduced expression of enzymes involved in the urea cycle and noted during acute metabolic decompensation.[6] The remaining half of the affected individuals present during childhood, between 2 and 4 years, with myopathic symptoms such as hypotonia, skeletal muscle weakness, exercise intolerance, episodes of rhabdomyolysis and myoglobinuria and elevated creatine kinase (CK).[3] Additionally, cardiac manifestations like dilated cardiomyopathy may occur and, if not promptly treated with carnitine may progress to heart failure and death.

Less frequently, adults with PCD may have no or mild symptoms (e.g. fatigue) but sudden cardiac death remains a risk in asymptomatic adults.[3][6] Some women have been diagnosed with PCD after their newborns were found to have low carnitine levels during neonatal screening.[3] Atypical manifestations such as anemia, respiratory distress, proximal muscle impairment, developmental regression, and arrhythmias have also been reported.[5][13]

When carnitine deficiency is suspected, the first step is to measure plasma carnitine levels.[13] Patients with PCD have low plasma free carnitine levels (< 5 μmol/L, normal 20–50 μmol/L).[4][6] Prompt referral to a metabolic specialist should be done and genetic testing is performed to confirm the diagnosis. Sequence analysis of the SLC22A5 gene, followed by the array comparative genomic hybridization (aCGH) if the sequence analysis is not conclusive. There is usually a poor correlation between genotype and phenotypic expression in PCD.[6][18] Some investigators have noted nonsense and frameshift mutations more commonly in symptomatic patients, and in asymptomatic mothers with PCD (identified by positive newborn screening of their infants), missense mutations and in-frame deletion are commonly reported.[18]

If genetic testing fails to confirm PCD diagnosis, functional assay such as the cultured skin fibroblast carnitine assay is the preferred test. In PCD, the OCTN2 transporter activity is <10% of normal controls.[14] Once PCD diagnosis is confirmed, the patient should undergo a series of investigations including echocardiogram, electrocardiogram, serum creatine kinase (CK), serum transaminases, and blood sugar levels.[14] Other biochemical tests such as plasma acylcarnitine profile and urine organic acid analysis may be required to evaluate other conditions resulting in secondary carnitine deficiency which are detailed in the differential diagnoses section.[13]

The mainstay of primary carnitine deficiency involves lifelong treatment with a high dose of oral L-carnitine (100 to 200 mg/kg daily dose in 3 divided doses).[3][4] The oral bioavailability of L-carnitine is 5% to 18%.[5] L-carnitine is a fairly safe medication, and few side effects associated with high doses include diarrhea and intestinal discomfort. Additionally, bacterial degradation of unabsorbed oral L-carnitine in the bowel results in trimethylamine, which has a peculiar fishy odor.[3][6] These side effects can be minimized by decrease the L-carnitine dose or treatment with a 7 to 10-day course of oral metronidazole, which could eradicate the intestinal bacterial overgrowth.[13]

Maintenance therapy with L-carnitine can improve plasma levels, and the dose is titrated based on the plasma levels and also on the response.[3] Continued L-carnitine administration prevents hypoglycemic episodes as well as cause improvement in myopathic symptoms. The muscle carnitine levels rise slightly (only up to 5% to 10% of controls), due to the abnormal OCTN2 which is unable to increase the uptake of carnitine into the myocyte adequately.[5][8] Carnitine enters mostly by passive diffusion from plasma and via low-affinity transporters, and this modest increase is enough to prevent muscle complications.[8]

Acute episodes of hypoglycemia in children with PCD are promptly treated with intravenous 10% dextrose and treatment of accompanying metabolic abnormalities (e.g., acid-base abnormalities), along with immediate carnitine supplementation.[8][17][8] It is crucial to avoid episodes of hypoglycemia in PCD by frequent feeding and avoiding fast states.[17]

Secondary carnitine deficiency (SCD) could result from multiple causes, either from a decrease in carnitine intake or more commonly from an increase in renal excretion. SCD may result from severe malnutrition, ketogenic diet, severe malabsorptive states, extremely preterm infants, and prolonged parenteral nutrition without adequate L-carnitine supplementation.[4][6] In conditions with renal tubular dysfunction (e.g., Fanconi syndrome), renal losses of carnitine are accentuated. Medications such as valproic acid, cyclosporine, pivampicillin, and some anti-cancer drugs (e.g., etoposide, vinblastine) can also contribute to carnitine deficiency.[6] Valproic acid therapy may deplete carnitine stores by various mechanisms such as increased urinary excretion as valproylcarnitine, decreased renal tubular reabsorption, and decreased endogenous production.[19] Similarly, pivampicillin antibiotic usage may cause reduce carnitine levels due to the formation of pivaloyl-carnitine ester, which is excreted in the urine.[5] The severity of SCD is generally less when compared to PCD as the plasma carnitine levels are relatively higher and hence easier to manage.[3][8]Patients with SCD, in general, do not have hepatic or cardiac involvement. However, they may have a moderate degree of skeletal muscular dysfunction.[20]

Similarly to PCD, hypoketotic hypoglycemia is highly suggestive for mitochondrial fatty acid oxidation (FAO) disorders (e.g., very long-chain acyl-CoA dehydrogenase or VLCAD, medium-chain acyl-CoA dehydrogenase or MCAD, etc.), or disorders of a defective mitochondrial carnitine-acylcarnitine cycle or simply referred to as disorders of carnitine shuttle (due to defects in enzymes, CPT-I, or CPT-II or CACT).[6][15] In most of the aforementioned SCD disorders with impaired fatty acid oxidation, the accumulation of acylcarnitine esters occurs.[5] These excessive acylcarnitines can inhibit carnitine reabsorption in the kidneys and are subsequently excreted in the urine resulting in SCD.[6][5] The accumulating acyl-carnitine in cardiac tissue can also induce damage.[6]

The clinical manifestations of FAO defects and carnitine shuttle disorders are heterogeneous and can be vague.[15] Similar to PCD, the most common manifestations include hypoketotic hypoglycemia, myopathies of both skeletal and cardiac muscles.[3][15][21][22] Most often, the manifestations are precipitated or worsened by either fasting or intercurrent illnesses.[15] The resulting metabolic abnormalities can be evaluated by the plasma acylcarnitine profile.[5][15] Diagnostic confirmation is by molecular testing methods and/or functional assays of the respective deficient enzyme.[15] Management includes prevention of fasting, frequent feeding, and providing nocturnal corn starch.[3][21] Diet therapy should focus on high carbohydrates and medium-chain triglycerides (which do not require carnitine shuttle) and low in long-chain fatty acids.[21] Management with L-carnitine is controversial in FAO disorders.[23]

In developed countries, the majority of the PCD cases are identified by newborn screening tests. Early diagnosis and prompt supplementation with L- carnitine has improved the prognosis.[3] The majority of PCD cases have a better outcome as long as L-carnitine therapy is maintained. However, this condition can be fatal if left untreated.[13] Sudden death could be the manifestation of undiagnosed patients.[6]

Generally, PCD is well tolerated with early diagnosis followed by prompt and aggressive management with L-carnitine. The clinical manifestations and severity of symptoms can be variable between patients with PCD. Undiagnosed or poorly controlled PCD may lead to severe complications. Hypoglycemic episodes can result in convulsions and brain damage.[15] Untreated episodes of hypoglycemia may progress to coma and death.[8] Metabolic abnormalities can cause hepatic dysfunction that also may progress to hepatic encephalopathy culminating in death.[15] Cardiac abnormalities include cardiomyopathy, which can be fatal, especially during the neonatal period or early childhood; left ventricular hypertrophy that can progress to dilated cardiomyopathy and subsequent decrease in left ventricular ejection fraction; pericardial effusion; and arrhythmias including the long QT syndrome.[15] Untreated asymptomatic adults are also at risk of the development of cardiac arrhythmias and sudden death.[3] 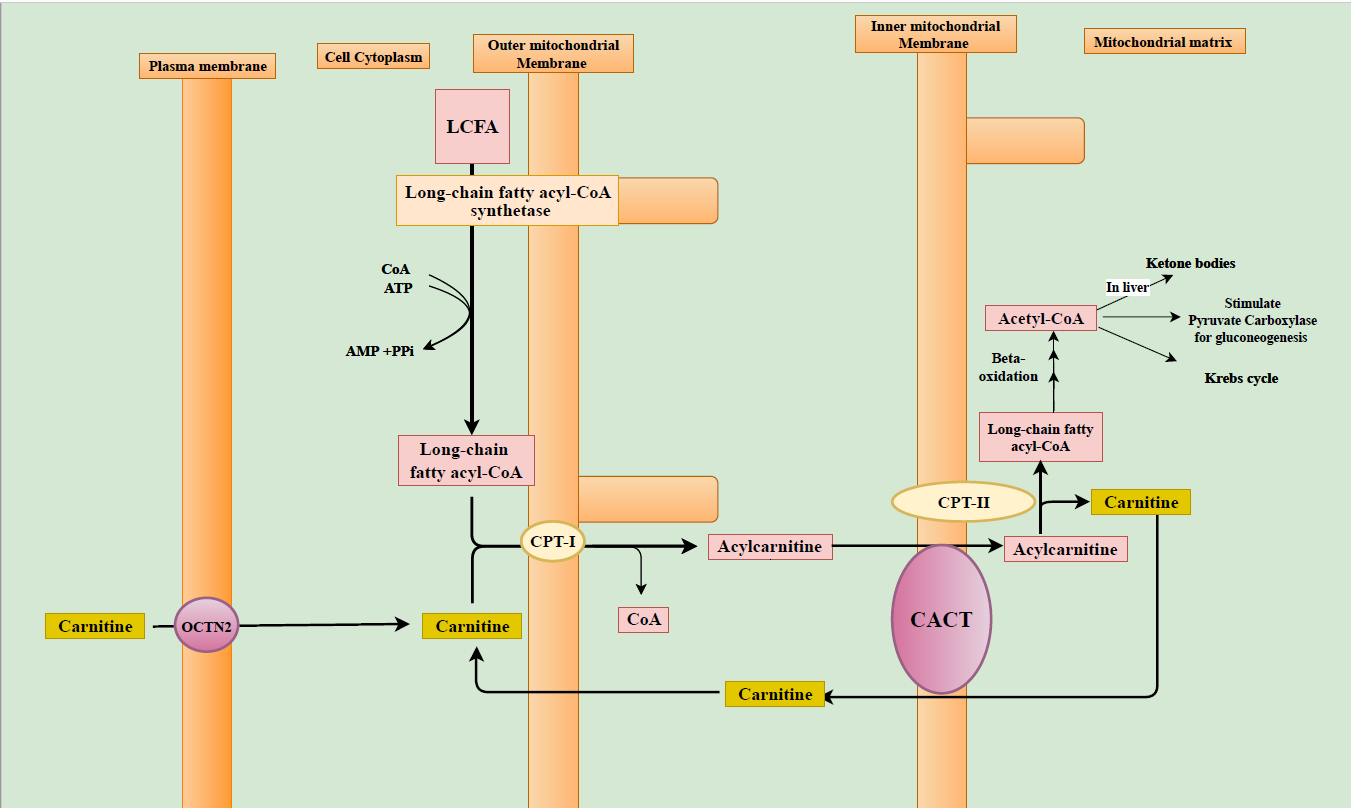