Carbamazepine is FDA indicated for epilepsy, trigeminal neuralgia, and acute manic and mixed episodes in bipolar I disorder.[1][2] Indications for epilepsy are specifically for partial seizures with complex symptomatology (psychomotor, temporal lobe), generalized tonic seizures (grand mal), and mixed seizure patterns.[1] Carbamazepine is not indicated for absence seizures.[3] Carbamazepine is FDA indicated as a first-line treatment for trigeminal neuralgia or tic douloureux. A systemic review shows the efficacy of carbamazepine extended-release in bipolar I mania in patients with acute manic or mixed episodes.[4]

Carbamazepine is used off-label for refractory schizophrenia. Simple well designed trials have shown efficacy in patients with schizophrenia with EEG abnormalities, schizophrenia with violent episodes, and schizoaffective disorder. It improves both positive and negative symptoms in schizophrenic patients.[5] Other off-label uses of this drug include treating restless leg syndrome and decreasing agitation and aggression in patients with dementia.[6][7] Another prominent off-label use of this drug is the treatment of neuropathic pain and fibromyalgia.[8] In patients with moderate to severe alcohol withdrawal syndrome, carbamazepine has shown clinical efficacy in treatment. However, this indication does not have approval from the FDA, and it has not been shown to prevent alcohol withdrawal seizures compared to benzodiazepines.[9] Carbamazepine is also used off-label for maintenance therapy for bipolar disorder. In a comparison trial among carbamazepine, lithium, and valproic acid, patients taking carbamazepine has a higher risk for relapse, yet not elevated by a significant amount.[10]

Carbamazepine is available as conventional tablets (100mg, 200mg), extended-release tablets (100 mg, 200 mg, 300 mg, and 400 mg), suspensions, and solutions. Extended-release tablets cannot be crushed or chewed. Tegretol and Tegretol XR should be taken with food, while Carbatrol capsules may be opened and sprinkled on food. Initial dosing is 200 mg twice daily in adults and 100 mg twice daily in children under 12, slowly increasing over time to a minimum effective level. Minimum effective levels in adults and children over 12 years are 800 mg to 1200 mg daily for the treatment of epilepsy. In children from six to 12 years, the effective level for treatment of epilepsy is 400 mg to 800 mg daily.[12]

The most common side effects of carbamazepine include dizziness, drowsiness, ataxia, nausea, and vomiting. Although rarer in occurrence, this comes with a black box warning for several severe dermatologic reactions. In patients of Han Chinese ancestry, studies have indicated a strong association between the HLA-B*1502 gene and Steven Johnson syndrome/toxic epidermal necrolysis (SJS/TEN). Studies have shown no increased risk with this gene and SJS/TEN in Iranian patients.[13] A meta-analysis of 11 studies with 343 cases of carbamazepine-induced SJS/TEN showed HLB-B*4001, HLB*4601, and HLB*5801 genes were strong protective factors. Patients of Han Chinese ancestry should undergo testing for the HLA-B*1502 gene. Up to 90 % of patients on carbamazepine who have this reaction experience it within the first few months of treatment. Another important allele to consider with this medication is HLA*3101. This allele is present in Japanese, Korean, and European ancestry.[1][14] Retrospective studies show a significantly increased incidence of dermatologic reactions such as Stevens-Johnson syndrome, toxic epidemic necrolysis, maculopapular eruptions, and drug reaction with eosinophilia and systemic symptoms (DRESS syndrome).[1]

Due to the mild anticholinergic activity, carbamazepine can increase the risk of delirium in the elderly population. This effect can also lead to urinary retention, increased intraocular pressure, and constipation.[16]

Carbamazepine can exacerbate heart failure patients or even lead to cardiac dysfunction in healthy patients due to its tendency to cause homocysteinemia. Homocysteine is commonly known to increase the risk of cardiovascular disease. Patients with cardiac conduction issues have a higher risk of undergoing atrioventricular (AV) heart block. The use of this drug in patients with an abnormal ECG should be avoided to elude potential second and third-degree AV heart block.

This drug is teratogenic and is a category D drug in pregnancy. Although contraindications to carbamazepine do not include pregnancy, clinicians should only use it if the benefits outweigh the increased risk of congenital malformation. Such malformations include spina bifida, craniofacial defection, cardiovascular cutaneous malformation, hypospadias, and developmental delays. Plasma level is reduced during pregnancy, likely related to increased metabolism. Carbamazepine can cross the placenta, and this drug can also be transferred through breast milk in nursing infants, prompting the need to decide whether to discontinue nursing or discontinue the drug in the mother.[17][18] Carbamazepine has a relatively low teratogenic effect in comparison to Valproic acid.[19] Precautions should be taking in mixed seizure disorder that includes atypical absence seizures. There is an increased frequency of generalized convulsions in this group of patients with this drug.

Carbamazepine is metabolized in the liver to carbamazepine-10, 11-epoxide, which is the active metabolite the leads to pharmacological action.[1] Before administering this drug, a few labs merit consideration. Screening for HLA-A*3101 and HLA-B*1502 genotypes should be conducted alongside a pregnancy test.[1] Complete blood counts (CBC) are necessary at baseline, and therapy should stop if a low white blood count or platelet count appears on subsequent lab results. Liver enzymes require an assessment to avoid acute liver failure. This drug shows an increased risk for suicidal thoughts and behavior, prompting psychiatric evaluation of patients of this drug if possible. Patients with increased intraocular pressure should have periodic eye examinations to look out for specific ocular changes, focusing on the slit lamp, fundoscopy, and tonometry.  This drug has shown increased porphyrin production in rodents. Patients with a history of porphyrias, such as acute intermittent porphyry, variegate porphyria, and porphyria cutanea tarda, should be carefully monitored to avoid acute attacks.

Clinicians should discontinue this drug at the first sign of a drug-related rash, any evidence of significant bone marrow depression, or worsening hepatic damage. Withdrawal should be gradual as immediate withdrawal severely increases the risk for status epilepticus. Abrupt discontinuation leads to severe hypoxia that can be fatal, especially to a pregnant woman. Even smaller seizures from withdrawing the drug too fast can lead to significant damage to the fetus. Routine screening should be ordered with a pregnant woman to assess for possible defects.

In adults, doses of carbamazepine exceeding 24 grams have correlated with fatal outcomes. Acute toxicity appears after 1 to 3 hours of intake and presents with neuromuscular disturbances. Patients have impaired consciousness leading to coma, tremor, restlessness, athetoid movements, psychomotor disturbances, dizziness, drowsiness, mydriasis, and nystagmus. Initially, patients experience hyperreflexia, but during intoxication, they progress into a state of hyporeflexia. Cardiac, vascular signs are generally mild with low toxicity, but with doses higher than 60 grams, severe cardiac dysfunction can occur. In cases of acute toxicity, respiratory depression, ECG abnormalities, tachycardia, shock, and urinary retention require monitoring and management to avoid end-organ damage. Treatment of an overdose focuses on eliminating the drug by inducing vomiting, gastric lavage, activated charcoal, and forced diuresis. Gastric lavage is indicated even after 4 hours of indigestion.[21] Seizures caused by carbamazepine poisoning should receive treatment with benzodiazepines such as diazepam.

Carbamazepine is often prescribed by primary care providers, neurologists, and pain specialists. When prescribing this medication, it is essential to inform the patient of the potential adverse effects. Therefore, patients require the attention of an entire interprofessional healthcare team that includes clinicians, nurses, and pharmacists, all coordinating their activities and engaging in open information-sharing regarding developments in the patient's case. This interprofessional teamwork will improve therapeutic outcomes and minimize adverse effects for patients receiving carbamazepine therapy. [Level 5]

The most common side effects of carbamazepine include dizziness, drowsiness, ataxia, nausea, and vomiting. Although rarer in occurrence, this comes with a black box warning for several severe dermatologic reactions. In patients of Han Chinese ancestry, studies have indicated a strong association between the HLA-B*1502 gene and Steven Johnson syndrome/toxic epidermal necrolysis (SJS/TEN).

If the drug has been prescribed for seizures, then the primary care providers should not alter the dose without first consulting with the patient's neurologist. Patients should be warned not to combine this agent with other antiseizure medications, alcohol, or illicit drugs.

Carbamazepine is one of the first anticonvulsants used to treat bipolar disorder. It is usually well-tolerated in comparison to Lithium and valproic acid. The new extended-release capsule approved by the FDA in 2004 is developed to decrease the fluctuation of plasma levels and lower the incidence of adverse effects. 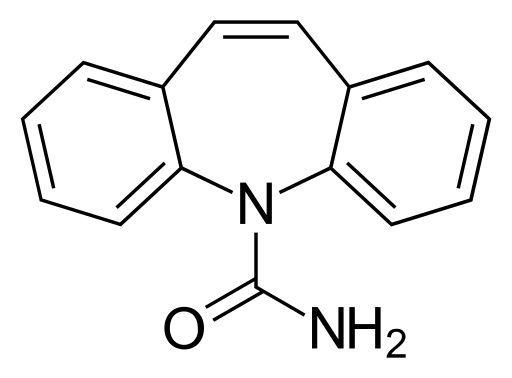 Ornoy A,Weinstein-Fudim L,Ergaz Z, Antidepressants, Antipsychotics, and Mood Stabilizers in Pregnancy: What Do We Know and How Should We Treat Pregnant Women with Depression. Birth defects research. 2017 Jul 17;     [PubMed PMID: 28714604]