Calciphylaxis, also known as calcific uremic arteriolopathy, is a rare but potentially devastating condition most often observed in patients with end-stage renal disease, although it does occasionally develop in patients without renal failure. It is characterized by cutaneous arteriolar calcification and subsequent tissue ischemia and infarction and causes painful skin lesions. Calciphylaxis is associated with substantial morbidity due to severe pain, non-healing wounds, and frequent hospitalizations. It is a highly fatal condition with 1-year mortality rates greater than 50 percent, most frequently due to sepsis. This activity describes the evaluation and management of calciphylaxis and highlights the role of the interprofessional team in improving care for affected patients.

Calciphylaxis is a rare but devastating disorder most commonly observed in patients with end-stage renal disease, although it does occasionally develop in patients with acute renal failure, normal renal function, or earlier stages of chronic kidney disease (non-uremic calciphylaxis). Also known as calcific uremic arteriolopathy, it is characterized by painful skin lesions caused by cutaneous arteriolar calcification leading to tissue ischemia and infarction. Calciphylaxis is associated with substantial morbidity due to severe pain, nonhealing wounds, and frequent hospitalizations. It is a highly fatal condition with 1-year mortality rates greater than 50%, most often due to sepsis.

Risk factors and associations for calciphylaxis include the following:

Although calciphylaxis can develop in the absence of kidney disease, most cases occur in patients with advanced renal failure. The incidence of calciphylaxis in dialysis patients ranges from 0.04% to 4%, and the rate appears to be rising over the last decade.[4]

Calciphylaxis typically results from calcification of the medial layer of arterioles and small arteries. Blood flow is further reduced by endothelial injury and formation of microthrombi leading to luminal narrowing and occlusion. These changes cause tissue ischemia, necrosis, and ulceration.

The cause and mechanisms leading to calciphylaxis remain poorly understood, and its development is likely dependent on multiple factors that lead to medial calcification of arterioles. Elevated calcium x phosphate product, increased parathyroid hormone levels, and administration of activated vitamin D have been associated with the development of calciphylaxis. However, abnormalities of bone-mineral parameters such as these are typically not sufficient to cause calciphylaxis on their own in most patients. Disturbances in bone-mineral parameters are extremely common in dialysis patients. However, most do not develop calciphylaxis. Further, calciphylaxis may develop even if parathyroid hormone, phosphorus, and calcium levels are normal.

Deficiency of vascular calcification inhibitors such as fetuin-A, osteoprotegerin, and matrix G1a protein may play a role in the development of calciphylaxis. Fetuin-A is a glycoprotein that binds calcium and phosphorus and may help to prevent calcification of vessels and soft tissue.[5] Fetuin-A is downregulated in dialysis patients. Matrix G1a protein may also prevent vascular calcification and is dependent on vitamin K dependent carboxylation for its activity. Warfarin use has been implicated as a risk factor for calciphylaxis, which may be related to its interference with vitamin K dependent activation of matrix G1a.[6]

Biopsy of the affected skin is needed to make the diagnosis of calciphylaxis. Both dermis and epidermis are often ulcerated and necrotic with various secondary changes. Calcification of small to medium-sized blood vessels are seen. The intimal layer of blood vessels id most commonly fibrosed and intravascular thrombi may be seen. The characteristic feature is the diffuse calcification of small capillaries in the adipose tissue.

Calciphylaxis typically presents with extremely painful ischemic cutaneous lesions or painful subcutaneous nodules without skin changes, although at times, pain may precede the development of the lesions.[7] Skin lesions often appear as violaceous or erythematous subcutaneous nodules and plaques. Livedo reticularis can also result from ischemia. As the lesions progress, they may become ulcerated with the development of necrosis, eschar, and infection. Proximal areas with increased adipose tissue such as the abdomen, thighs, and buttocks are most commonly involved, although distal sites such as the digits can also be affected. Extreme pain is a hallmark of calciphylaxis leading to considerable morbidity.

While skin manifestations are dominant, calciphylaxis is a systemic condition that may involve other organs including the eyes, penis, muscle, brain, intestines, and lungs.

Diagnosing calciphylaxis requires a high index of suspicion. A definitive diagnosis is made after a skin biopsy of one of the lesions. The histologic evaluation shows medial calcification of dermal arterioles or small arteries and may show fibrointimal hyperplasia, microthrombi, and vascular narrowing or occlusion, often with evidence of necrosis.[8]

The need for biopsy in the diagnosis of calciphylaxis is debatable. While a biopsy is often performed to differentiate early stages of calciphylaxis from other skin lesions, the biopsy itself carries some risk, particularly for patients with only subcutaneous nodules. A skin punch biopsy may precipitate ulceration, bleeding, infection, or necrosis. Thus, if the clinical suspicion for calciphylaxis is high, some clinicians will forego a biopsy and treat based on a presumptive diagnosis.

Laboratory workup should include a metabolic panel, hepatic function, partial thromboplastin time, international normalized ratio, and albumin tests. In some cases, a hypercoagulable workup may be appropriate.

Additional experimental diagnostic tools include using nuclear bone scans to evaluate soft tissue calcification in the areas of the lesions. Assessing circulating fetuin-A levels has also been suggested as an approach to evaluating for calciphylaxis.

Given the possible role of bone-mineral disorders in the pathophysiology of calciphylaxis, careful attention should be paid to avoid hypercalcemia, with phosphorus levels maintained at less than 5.5 mg/dL. At a minimum, dialysis adequacy criteria should be met, and dialysis frequency can be increased if necessary to optimize the clearance of uremic molecules and improve bone-mineral markers. Patients should discontinue the use of calcium supplements, and calcium-based phosphate binders should be converted to non-calcium containing binders. High calcium dialysate baths (greater than 2.5 meq/L) should also be avoided. The parathyroid hormone should be maintained between 150-300 ng/mL. For patients with secondary hyperparathyroidism, cinacalcet, a calcimimetic agent used to lower parathyroid hormone, should be used in place of activated vitamin D to avoid increasing serum calcium and phosphorus levels. In the evaluation of cinacalcet hydrochloride therapy to lower cardiovascular events (EVOLVE) trial, dialysis patients with secondary hyperparathyroidism were randomized to cinacalcet or placebo, and those who received cinacalcet were found to be less likely to develop calciphylaxis, although the overall incidence was low in both groups.[9] Etelcalcetide, a new intravenous calcimimetic, has not been studied in calciphylaxis but may be a reasonable alternative in patients intolerant of cinacalcet. The role of surgical parathyroidectomy in the treatment of calciphylaxis has not been established.[10]

In addition to addressing bone mineral parameters, the patient should discontinue any potentially problematic medications if possible. Given the association between warfarin and calciphylaxis, patient education regarding the risks and benefits of stopping anticoagulation or switching to a direct-acting oral anticoagulant is important.[8] Studies regarding the use of vitamin K supplementation to activate matrix G1a protein have been proposed to study vitamin K as a possible treatment option for calciphylaxis, but the efficacy of this approach has not been evaluated.

Wound care and pain management are important.[3] Debridement may be needed to remove devitalized and necrotic tissue, prevent infection, and promote healing. Prophylactic antibiotics are not recommended. However, wounds often become infected, and clinicians should have a low threshold to start antibiotics. Recent reports suggest a possible role of hyperbaric oxygen therapy which has been shown to facilitate wound healing in some patients.[12]

The differential diagnosis for calciphylaxis includes:

The history, findings on physical examination, laboratory testing, and histologic assessment can differentiate calciphylaxis from other entities.

Calciphylaxis has a poor prognosis with 1-year mortality rates between 45% and 80%, and the response to therapy is also poor. Patients with ulcerated lesions are particularly prone to developing an infection, which is the leading cause of death.

Superimposed infections of the affected regions are the most common complication of this disease. Due to the often underlying immunocompromised status of the patients, the risk of associated sepsis is high as well.

Less severe, though equally devastating complication of this disease is debility due to pain. Calciphylaxis lesions are extremely painful and result in significant morbidity for the patients.

Primary prevention is of utmost importance in regards to calciphylaxis. Patients should be counseled on compliance with hemodialysis, dietary restrictions, and the use of phosphate binders to prevent the development of this condition.

No prospective trials have assessed treatment efficacy in patients with calciphylaxis. Evidence of successful interventions predominantly derives from case reports, case series, and retrospective analyses. Lesions are challenging to treat and are often refractory to isolated therapies. Therefore, an interprofessional and multimodal approach should be employed. A calciphylaxis team approach may include input from a nephrologist, dermatologist, dietician, wound surgeon, wound nurse, pain management specialist, palliative care team, and hyperbaric oxygen provider[13].

The outlook for most patients with calciphylaxis is poor. Most patients have a poor quality of life and suffer from excruciating pain, which is often not responsive to conventional analgesics. 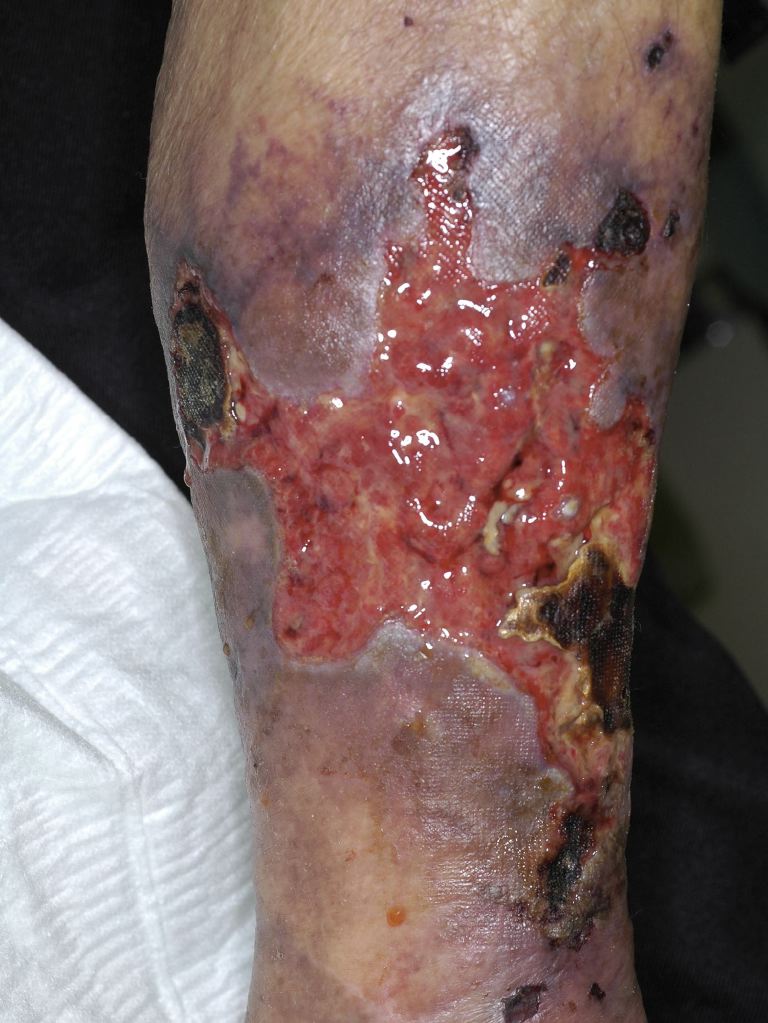