The Buccinator muscle is a bilateral square-shaped muscle constituting the mobile and adaptable cheek area.[1] Couper and Myot coined the term buccinator in the year 1694.[2] This muscle is sometimes referred to as an accessory muscle of mastication due to its role in compressing the cheeks inwards against molars, thus, aiding in chewing and swallowing.[3] Due to its function of puffing out cheeks, it is also called the "trumpeter's muscle." It lies deep to the skin. Superficial to this muscle lies the anterior border of the masseter and more superficial facial muscles.[4] One of the first muscles in an infant to get activated during sucking is the buccinator.

The buccinator muscle plays an active role along with the orbicularis oris and superior constrictor muscle during swallowing, mastication, blowing, and sucking. It aids in mastication and blowing by compressing the cheek inwards. There are theories that the muscle thickens the cheek mucosa acting as a muscular hydrostat.[5] Due to this thickening, the cheek pushes a food bolus towards the tongue.[5]

Its contraction also pulls the corner of the mouth laterally. While closing the mouth, the muscle contracts gradually, and during the opening movement, it relaxes; this maintains the required tension of the cheeks, thereby preventing injury of the buccal mucosa.[2][3]

It also helps in the retention and stabilization of the complete denture. Research also shows it plays a role in patients with a habit of thumb/finger sucking.[6]

There are different phases of swallowing. Buccinator tends to act during two of the phases of swallowing. i.e., oral and pharyngeal phases  Buccinator, along with the orbicularis oris muscle, begins the swallowing movement in the oral phase by generating a peristaltic wave-like contraction.[7] This wave passes through the pharynx. The buccinator muscle initiates the wave and is followed by the orbicularis oris muscle quickly.[7]

Apart from this, the buccinator muscle gets activated during some mandibular movements like protrusion and retrusion. This activation does not cause the actions directly but aids in the expression of an effort to perform them.[8]

Also, there are reports that some small fibers originate from this muscle and insert into the parotid duct (distal portion.)  These fibers play an active role in regulating the physiological secretion of saliva from the parotid duct.[9]

The muscle derives from the second pharyngeal arch or the hyoid arch. It starts to develop along with other facial muscles between 3 and 8 weeks from the laminae formed on each side of the face from pre-myeloblasts and myeloblasts. There are five laminae formed out of which the mandibular lamina creates the buccinator.[10]

Venous drainage of the muscle occurs through the pterygoid plexus and internal maxillary vein.

On the lateral aspect, this muscle is related to the ramus of the mandible, muscle of mastication (masseter and medial pterygoid muscle), the buccal fat pad, and the buccopharyngeal fascia. On the medial aspect, its covering is the submucosa and mucosa of the cheek.

The buccinator muscle is pierced by the parotid duct (Stenson's duct) after it crosses the masseter muscle and turns medially at the anterior border of the muscle to open in the oral cavity into a small papilla opposite the maxillary second molar.

Although a rare phenomenon, the crestal attachment of the buccinator muscle may lead to difficulty in routine oral functions and restoring the edentulous area.

As the parotid duct pierces the buccinator muscle, it should be identified and preserved during surgery, such as while raising the buccinator flap. Small to moderate-sized defects of the oral cavity can have reconstruction with the buccinator flap, which is easy and quick to raise. It replaces mucosa with mucosa and correlates with a very low degree of morbidity at the donor site. It is remarkably elastic and thus can be stretched easily to conform to defects with a complex shape.

Hyperactivity of the buccinator muscle can cause excessive pressure on the underlying hard tissues resulting in narrow arches and malocclusion.[13][14]

Damage to the facial nerve can lead to paralysis of the buccinator muscles, which can lead to difficult mastication as the non-functioning of this muscle can cause repeated laceration of the cheek mucosa.

Abnormal attachment of this muscle may interfere with the proper prosthodontic management and maintaining oral hygiene. It will also restrict the cheek and lip movement leading to difficulty in mastication and phonation.

The muscle has been shown to have an indirect involvement during parafunctional movements.

In the oral cavity, inward forces by the orbicularis oris and the buccinator muscle get balanced by the outward forces of the tongue. While making an impression for a completely edentulous patient, molding must be done by muscle function in such a manner that it is in harmony with the surrounding musculature.

The buccinator, along with orbicularis oris and pharyngeal constrictor, forms a functional unit (buccinator mechanism) which is essential for orofacial functions (swallowing, sucking, whistling, chewing, vowel pronunciation). Food tends to accumulate in the vestibule during chewing if the buccinator is weakened or paralyzed.

The buccinator muscle plays a role in stabilizing the denture by gripping the polished surface of the denture. Also, the longitudinal fibers hold the bolus of food between the teeth during mastication. The maxillary bundle of this muscle tends to raise the upper denture, whereas the mandibular bundle of this muscle depresses the lower denture, thus aiding in denture stability and retention.

The fascial spaces confine early infection, but since the spaces communicate with each other, the inflammation can involve the other spaces as the infection progresses. The buccal space is the fascial space limited superomedially and inferomedially by fibers of the buccinator muscle originating from alveolar processes of the maxilla and mandible. Thus, the roots of the posterior teeth are related to this space. Any infection in the parotid may extend to the buccal space and vice versa.[15] 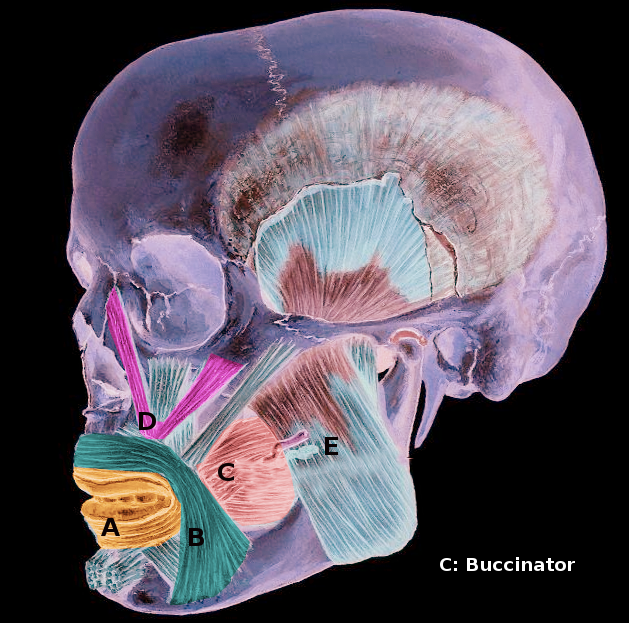 Kang HC,Kwak HH,Hu KS,Youn KH,Jin GC,Fontaine C,Kim HJ, An anatomical study of the buccinator muscle fibres that extend to the terminal portion of the parotid duct, and their functional roles in salivary secretion. Journal of anatomy. 2006 May;     [PubMed PMID: 16637883]

Som PM,Naidich TP, Illustrated review of the embryology and development of the facial region, part 2: Late development of the fetal face and changes in the face from the newborn to adulthood. AJNR. American journal of neuroradiology. 2014 Jan;     [PubMed PMID: 23493895]

Paonessa DF,Goldstein JC, Anatomy and physiology of head and neck infections (with emphasis on the fascia of the face and neck). Otolaryngologic clinics of North America. 1976 Oct;     [PubMed PMID: 980495]