Congenital bronchial atresia is a rare condition characterized by focal obliteration of a proximal segment of a bronchus. The apicoposterior segmental bronchus of the left upper lobe is the most reported lobe involved, which is followed by the right upper, middle, and lower lobes. Although a rare entity, bronchial atresia has been associated with other prenatal lung malformations including congenital cystic adenomatoid malformation, bronchopulmonary sequestration, congenital lobar emphysema, and lesions of mixed pathology. This activity describes the pathophysiology of bronchial atresia and highlights the role of the interprofessional team in its management.

Congenital bronchial atresia is a rare condition characterized by focal obliteration of a proximal segment of a bronchus. The apicoposterior segmental bronchus of the left upper lobe is the most reported lobe involved, which is followed by the right upper, middle, and lower lobes. Although a rare entity, bronchial atresia has been associated with other prenatal lung malformations including congenital cystic adenomatoid malformation, bronchopulmonary sequestration, congenital lobar emphysema, and lesions of mixed pathology.[1][2]

The cause of bronchial atresia has yet to be fully elucidated; however, two mechanisms are theorized. One hypothesis is that the proliferating cells lose their connection with the developing respiratory bud during normal lung maturation. A second postulation is that a repetitive vascular insult to lung parenchyma during early fetal development leads to obliteration of an already completed bronchus.[1][2]

The predominance of bronchial atresia has a predilection for males, with an estimated prevalence of 1.2 cases per 100,000 in that population.[3]

The main airways and pleura form during the embryonic stages at weeks 4-7. Formation of the bronchial tree continues into weeks 5-17, during the pseudoglandular stage.  During this stage the respiratory buds are growing outward and dividing into the adjacent mesenchymal tissues, giving rise to future respiratory channels. The theorized cause of bronchial atresia occurs during one of these early stages of lung formation.

Pathologically, the diagnosis of bronchial atresia is made based on the macroscopic findings. These being mucus plugging of the prominent alveoli and the involved airways. There are usually no acute or chronic inflammatory changes associated with bronchial atresia unless concomitant infection occurs.[1][4][5]

Approximately two-thirds of the patients diagnosed with bronchial atresia in one study were asymptomatic and incidentally found on chests radiograph. Patients usually get diagnosed in the second or third decades of life. One-third of the patients report symptoms, which include cough, shortness of breath and recurrent infections and to a lesser extent wheezing, hemoptysis, chest pain, or pneumothorax.[5][6]

As previously stated, most cases of bronchial atresia are an incidental finding on chest radiograph. It will appear as a silhouette close to the hilum in a tubular, round, ovoid or branching structure. If the distal lung becomes infected, it can have the appearance of pneumonia.

Computed tomography is the modality of choice when diagnosing bronchial atresia. The classic finding on computed tomography is branching tubular or nodular opacities radiating from the hilum with a “finger-in-glove” appearance from the formation of mucoid impaction of the distal bronchus, that is a mucocele. However, there have been reported cases, although rare, where there is no mucoid impaction, and instead, an air-filled bronchus is present. The distal lung supplied by the atretic segment can be hyperlucent and hyperinflated secondary to oligemia and air-trapping. Collateral ventilation from intra-alveolar pores of Kohn, bronchoalveolar canals of Lambert, and inter-bronchiolar channels of Martin function as a one-way check valve allowing air to enter but not escape.

Bronchoscopy was once the modality of choice before the mainstream use of computed tomography. A blinding-ending bronchus with classic radiographic features was considered diagnostic for bronchial atresia. However, the absence of typical radiologic features and a blind-ending segmental or sub-segmental bronchus on bronchoscopy can be regarded as a normal anatomic variant, rather than raising suspicion for the alternative diagnosis of bronchial atresia.[1][5][6]

There are no current guidelines for treatment or management of bronchial atresia. Typically, there will be no active treatment in asymptomatic patients. However, some argue that resection of the involved segment is recommended to prevent secondary complications such including infection of the lung parenchyma or compromise of adjacent lung parenchyma.[7]

As mentioned above, most cases of bronchial atresia are asymptomatic with intervention being controversial. However, surgery is generally only for the rare cases with severe symptoms such as recurrent infection or significant compromise of adjacent lung parenchyma. The overall prognosis is favorable with most patients never suffering from severe symptoms, or experiencing excellent outcomes if they do undergo surgery.[1][7]

The most reported complications from bronchial atresia are infections, spontaneous pneumothorax, and degradation of the pulmonary parenchyma in the long term.[1][7]

If the patient undergoes resection of the involved segment, postoperative complications can occur. These include air leak and pneumothorax, which may require drainage. Postoperative care is a continuum of severity from minimal care to mechanical ventilation. Furthermore, achieving optimal pain control is necessary for patient comfort. Early mobilization of the patient is encouraged to promote rapid recovery.[8][7]

Consultations with a radiologist, thoracic surgeon, and pulmonologist are fundamental for the diagnosis, treatment, and management of bronchial atresia.

Patients are mostly asymptomatic and require no intervention. However, it is also essential to educate patients on the symptoms associated with bronchial atresia. If the patient is suffering from complications of bronchial atresia, it is imperative to seek medical treatment. The physician must discuss medical and surgical treatment, outcomes, and rehabilitation with the patient so that they can make an informed decision on desired intervention.[1][8][7]

Bronchial atresia has become a recent topic of interest with an increase in published case reports. Despite the years of research, the exact cause of bronchial atresia is unknown. The hypotheses of interruption from the developing pulmonary bud or repeated vascular injury are still widely accepted. Most cases are found incidentally on radiography with high-resolution computed tomography being the modality of choice for diagnosis. Treatment and management are controversial with asymptomatic patients being managed conservatively or undergoing surgery to prevent long-term outcomes.

The diagnosis, treatment, and management of bronchial atresia is a team-based approach involving the coordination of care between respiratory therapy, nursing, radiology, thoracic surgery, pulmonology, and the primary care provider. If the patient is asymptomatic, the healthcare team must discuss conservative management versus elective surgery. If the patient is suffering from severe effects from bronchial atresia, early consultation with thoracic surgery and pulmonology is necessary. Appropriate follow-up and postsurgical care are imperative for the management of this condition.[1][5] 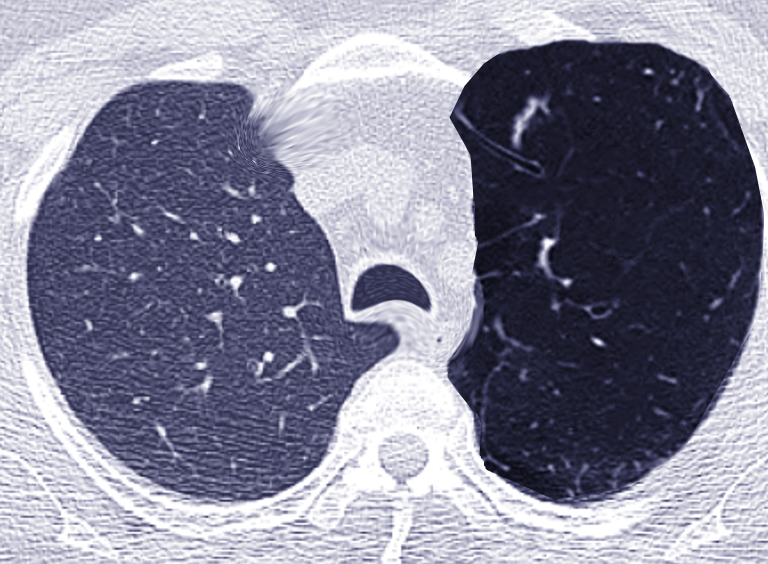