A Bartholin gland cyst is usually a unilateral, asymptomatic blockage of the Bartholin gland that may be incidentally discovered during a pelvic exam or imaging studies. The activity describes the evaluation and management of Bartholin gland cyst and reviews the role of the interprofessional team in improving care for patients with this condition.

Bartholin glands, also known as the greater vestibular glands, are a pair of 0.5 cm glands located in the lower right and left portions at the 4 o'clock and 8 o'clock positions of the vaginal introitus. The Bartholin gland is a mucus-secreting gland, which plays a role in vaginal lubrication. Bartholin glands are generally nonpalpable when not obstructed. Cysts and abscesses are often found after the onset of puberty and a decrease in incidence after menopause.[1]

A Bartholin gland cyst is a benign blockage of the Bartholin gland that is usually unilateral, asymptomatic, and maybe incidentally found during a pelvic exam or imaging studies. Bartholin gland obstruction may occur after trauma to the area, episiotomy, or childbirth; however, it may also occur without an identifiable cause.[2]

Bartholin cysts/abscesses are predominantly found in women of child-bearing age. The incidence of Bartholin cysts is most often noted at the onset of puberty and increases with age until menopause.[3] Symptomatic Bartholin cysts and abscesses account for 2 percent of all gynecologic visits per year.[4]

Bartholin glands can form a cyst and an abscess in women of reproductive age. Both are difficult to differentiate on a physical exam. The cyst is usually 2-4 cm in diameter and may cause dyspareunia, urinary irritation, and vague pelvic pain. The cyst is usually filled with nonpurulent fluid that contains staphylococcus, streptococcus, and E.coli.

When examining a patient with a suspected Bartholin gland cyst/abscess, it is important to inquire about the duration of symptoms; tenderness with activities such as walking, sitting, standing, or sexual intercourse; purulent drainage; and history of previous Bartholin gland cyst/abscess, vaginal bleeding/discharge, or sexually transmitted infections. Bartholin cysts often have a protracted course as they are mainly asymptomatic. Take into consideration the patient's age, because malignancy, while rare, may have a similar presentation.

The physical exam will often reveal asymmetry with a protrusion of one side (left or right) of the inferior aspect of the vulva. Bartholin gland abscesses, unlike Bartholin cysts, are very painful. While both are primarily unilateral, Bartholin abscesses are often tender to palpation, erythematous, indurated, and may have an area of fluctuance and/or purulent drainage.

Bartholin cyst abscesses do not frequently require further laboratory or radiographic studies; however, wound cultures and biopsy may be performed during incision and drainage of the abscess. If sexually transmitted infections are suspected, then a sexually transmitted infection panel (including gonorrhea, chlamydia) should be considered and appropriate treatment initiated.

If malignancy is suspected due to an atypical presentation of the mass or if the patient is over 40 years old, then a biopsy should be considered.[5]

Asymptomatic Bartholin cysts do not require further treatment. Bartholin cysts or abscesses that are spontaneously draining may be managed conservatively with sitz baths and analgesics.

Although no modality of treatment, surgical or conservative, is superior to any other in terms of recurrence rate,[6] first-time Bartholin abscesses may be treated with incision and drainage with Word catheter placement due to ease and effectiveness of treatment.

Allergy history should be obtained before beginning the procedure as the Word catheter stem is composed of latex, and marsupialization is the procedure of choice in those with latex allergies.

Although this is not a sterile procedure, a mask with a face shield and a gown are recommended.

Incision and drainage with Word catheter are performed by first cleaning the region with povidone-iodine and anesthetizing the location where the incision will be made with 3 mL of 1% lidocaine. A small, approximately 3 mm, a vertical incision should be made with a #11 scalpel along the mucosal surface of the labia minora to avoid obvious scarring and to reduce the risk of Word catheter displacement. Purulent discharge evacuated may be sent to the lab for cultures, and biopsy may also be performed at this time. Word catheter is then inserted with the balloon tip sitting within the abscess cavity. Inflate the balloon tip with 3 to 5mL of saline water. For comfort and to reduce the chance of displacement, the external portion of the Word catheter is pushed into the vagina. Word catheters should be left in place for at least 4 weeks for appropriate drainage and tract epithelization.[7]

Incision and Drainage with Word catheter placement may be attempted a second time for recurrent Bartholin abscess with the addition of antibiotics. Antibiotics should cover staphylococcal, specifically methicillin-resistant Staphylococcus aureus, and streptococcal species as well as enteric gram-negative aerobes, including Escherichia coli. Antibiotic choices include trimethoprim-sulfamethoxazole alone, amoxicillin-clavulanate plus clindamycin, or cefixime plus clindamycin. Referral to gynecology for marsupialization may also be considered at this time.

Antibiotic therapy should be considered for those who have failed initial I&D (incision and drainage) with Word catheter placement, patients with systemic symptoms including fever, patients who have suspected sepsis, and those considered at high risk for recurrence.

Marsupialization is performed by a gynecologist in the operating room, and for this reason, incision and drainage with Word catheter placement are usually attempted first. Marsupialization is performed by creating a 2-cm incision lateral to the hymenal ring, everting the edges with forceps, and suturing the edges onto the epithelial surface with interrupted absorbable sutures.[8]

Women who are pregnant and have Bartholin abscesses should be treated in the same manner as nonpregnant women, with the exception of Bartholin gland excision due to the increased risk of bleeding.

In the WoMan-trial (world catheter and marsupialization in women with a cyst or abscess of the Bartholin gland), a randomized controlled trial in the Netherlands and England between August 2010 and May 2014, 161 women were randomly allocated to treatment by Word catheter or marsupialization to compare recurrence of a cyst or abscess within 1 year.

Recurrence rates were found to be comparable within the two groups; however, the marsupialization group had increased use of analgesics within the first 24 hours and increased the duration of treatment.[6]

The prognosis is excellent but if the cyst is just aspirated, high recurrence rates have been reported. The healing and recurrence rates are similar among fistulization, marsupialization, and silver nitrate and alcohol sclerotherapy. Needle aspiration and incision and drainage, the two simplest procedures, are not recommended because of the relatively increased recurrence rate.[12]

The treatment of Bartholin's gland cysts by traditional surgery is characterized by some disadvantages and complications such as hemorrhage, postoperative dyspareunia, infections, the necessity for general anesthesia. Contrarily, CO2 laser surgery might be less invasive and more effective as it solves many problems of traditional surgery.[13]

Sitz baths are recommended for a few days. Early ambulation and consumption of an ample amount of water are highly recommended.

The clinician, the nurse, and the pharmacist play a pivotal role in educating patients and their families about their condition. Women should be instructed to observe for any signs of infection, such as foul-smell vaginal discharge or any abnormal bleeding. Women should be encouraged to drink an ample amount of water and ambulate early, as this will help to speed their recovery.

The nurse, the clinician, and the pharmacist must collaborate efficiently during the care of women with Bartholin gland pathology, in order to achieve the best possible outcome for these women and their families. Women with a Bartholin gland cyst are usually first seen by the primary care provider, nurse practitioner or internist. Because of the extensive differential, it is important to involve the gynecologist in the care of these patients.

The pharmacist has a very important role in educating patients about the available antimicrobial agents and in providing them with the required information about drug-drug interactions, in order to avoid any possibly preventable complications. The pharmacist should educate the patient on compliance and encourage them to immediately report any adverse events or any concerns.

While the actual drainage or marsupialization is done by the gynecologist, the patient follow up and teaching are done by the nurse practitioner. The nurse practitioner should educate the patient on how to perform sitz baths and maintaining perineal hygiene. If antibiotics are prescribed. All patients need a follow up to ensure healing has occurred.

The best standard of care to women with Bartholin gland cysts or abscesses could never be achieved without the interprofessional collaboration between the nurse, the clinician, and the pharmacist. Clear and effective communication among the members of the interprofessional team is key to the successful management of women with Bartholin gland pathology. [Level V] 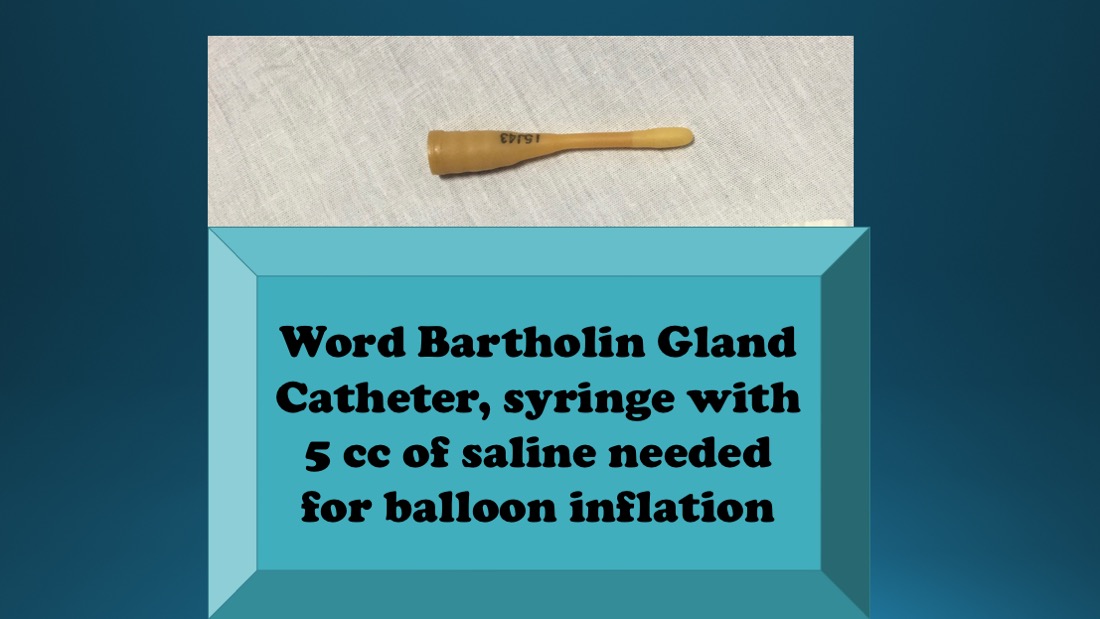 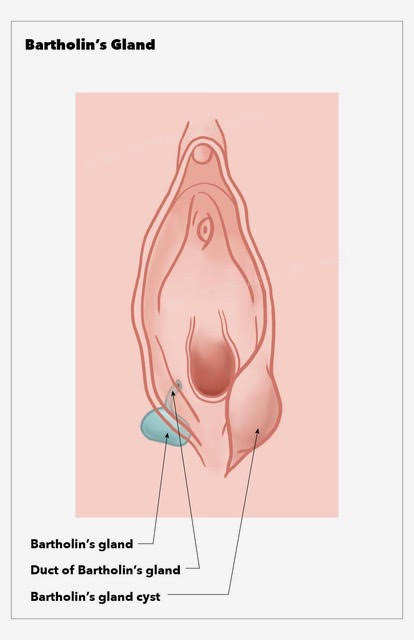 Pundir J,Auld BJ, A review of the management of diseases of the Bartholin's gland. Journal of obstetrics and gynaecology : the journal of the Institute of Obstetrics and Gynaecology. 2008 Feb     [PubMed PMID: 18393010]

Yuk JS,Kim YJ,Hur JY,Shin JH, Incidence of Bartholin duct cysts and abscesses in the Republic of Korea. International journal of gynaecology and obstetrics: the official organ of the International Federation of Gynaecology and Obstetrics. 2013 Jul     [PubMed PMID: 23618035]