Auerbach plexus (named after Leopold Auerbach (1828-1897)), also known by the name of myenteric plexus, is a group of ganglia that run throughout the entire gastrointestinal tract and innervate its multiple layers of smooth muscle. This collection of nerves is sandwiched between two layers of the muscularis externa, the inner circular muscle layer, and the outer longitudinal muscle. Combined with another set of nerves, the submucosal (Meissner) plexus, they make up the enteric nervous system. The myenteric plexus is principally responsible for the peristaltic movement of the bowels. While it can act independently from the central nervous system, it receives innervation from the autonomic nervous system, connecting the central and enteric nervous systems. The dysfunction of this structure is the etiology underlying several disorders, including Hirschsprung disease, achalasia, and gastroparesis. The myenteric plexus is also the target of mu receptor opioids.

Auerbach plexus is one of two significant components of the enteric nervous system. It is a collection of interconnected neurons that spans from the esophagus to the rectum. Structurally, axons start over 100 nm away from the smooth muscle cells they innervate. In contrast to other areas of the peripheral nervous system, they lack a clearly defined postsynaptic area and do not form neuromuscular junctions. Excitatory and inhibitory motor neurons allow smooth muscle cells of the intestines to exist in an electrical syncytium. Control of these signals is initiated by various neurotransmitters that can produce either relaxation or contraction of these smooth muscles. Specific patterns of movement that are the result of this process create the peristalsis that transports food along the gastrointestinal tract.

There are numerous neurotransmitters involved in this process. The most important ones responsible for intestinal relaxation are vasoactive intestinal peptide (VIP), nitric oxide, pituitary adenylate cyclase-activating peptide, and purine. Alternatively, stimulation of intestinal contraction is mostly due to tachykinins and acetylcholine. As mentioned above, specific patterns of contraction and relaxation are what create the peristaltic reflex, and the myenteric plexus mediates this process. Acting with the interstitial cells of Cajal through the gastrointestinal system, alternating between distal relaxation and proximal contraction, the system facilitations movement of waste through and out of the body.[1]

The myenteric plexus develops from the neural crest cells of the fetus. These cells then go through a series of migrations to situate along the future gastrointestinal tract. At three weeks of gestation, these cells move to the anterior foregut, where they are then referred to as enteric neural crest-derived cells (ENCDCs). Interestingly, neural crest cells induce the differentiation of surrounding muscular structures and interstitial cells of Cajal (ICC). In turn, these differentiate into the elements of the enteric nervous system, glial cells, and neurons. By week 9 of embryologic development, the myenteric plexus, circular muscle, and longitudinal muscle layers have formed along the entire gut.[2]

The blood supply to the myenteric plexus follows that of the gastrointestinal system. The celiac artery supplies the foregut. Alternatively, blood is delivered to the midgut and hindgut by the superior and inferior mesenteric arteries, respectively. Uniquely, the capillaries that supply the myenteric layer are non-fenestrated, which differs from the capillaries supplying the other layers of the intestine.[3]

The myenteric plexus lies in between the outer longitudinal and inner circular smooth muscle layers of the intestines. By stimulating these muscles, it controls motility along the gastrointestinal tract.

Peroral endoscopic myotomy (POEM) is a procedure that originated as an innovative treatment for achalasia. It targets the inner circular layers of smooth muscle responsible for lower esophageal sphincter (LES) contraction. A submucosal tunnel is first created to reach the inner circular muscle bundles. This layer then gets removed, and the outer longitudinal muscle bundles are preserved. The surgery has now expanded to include gastric POEM (G-POEM) and rectal endoscopic myotomy, which surgeons use to treat gastroparesis and Hirschsprung disease, respectively.[5]

Disorders of peristaltic movement are common and can occur in different areas of the gastrointestinal tract. Many are due to dysfunction or absence of the myenteric plexus, which controls this process. Etiologies are diverse and can be congenital, degenerative, or medication-induced.

Hirschsprung disease is a congenital disorder defined by the absence of ganglionic cells in the submucosal and myenteric plexus, also referred to as congenital aganglionic megacolon. In these patients, the migration of neural crest cells fails to occur during embryogenesis. Infants present with symptoms of intestinal obstruction, such as abdominal distension, bilious emesis, and failure to pass meconium within 48 hours of birth.[6] There also may be a positive ‘squirt sign,’ which is the expulsion of the stool after a digital rectal exam. Infants may also present with enterocolitis that can progress to toxic megacolon.[7] The presence of a transition zone between the constricted aganglionic rectum and the dilated colon proximal to the aganglionic section is pathognomonic for Hirschsprung disease. However, a rectal biopsy is the gold standard test for diagnosis.[8] Hirschsprung disease treatment employs a transanal endo-rectal pull-through (TERPT) procedure.[9]

Achalasia is the progressive inflammation and degeneration of ganglion cells in the myenteric plexus of the esophagus. This disease process preferentially targets the nitric-oxide-producing inhibitory neurons responsible for the relaxation of the esophageal smooth muscle. There is relative sparing of cholinergic neurons contributing to increased muscle tone.[10] Presenting symptoms include dysphagia to solids and liquids, undigested food regurgitation, heartburn not alleviated by PPI therapy, and solid food visualized on upper endoscopy. Diagnosis is made with esophageal manometry, demonstrating a lack of peristalsis in the distal two-thirds of the esophagus, incomplete lower esophageal relaxation, and elevated resting lower esophageal sphincter pressure.[11]

Gastroparesis is a delayed gastric emptying in the absence of mechanical obstruction. Patients present with nausea, vomiting, early satiety, postprandial fullness, belching, and bloating. Gastroparesis involves dysfunction of extrinsic neural control, intrinsic nerves, interstitial cells, and smooth muscle movement. Diabetes is the most common cause of gastroparesis. It may also be idiopathic, associated with neurological disorders, occur after a viral or bacterial infection, or post-surgical. Diagnosis involves using gastric emptying scintigraphy.[1] Metoclopramide is the only FDA-approved medication for gastroparesis. It acts on the D2 and 5HT4 receptors.[13]

Gut region-specific diabetic enteric neuropathy is proposed to be due to a regional reduction in matrix metalloproteinase 9 (MMP9) that leads to an accumulation of extracellular matrix that in turn leads to a region-specific thickening of the endothelial basement membrane of the capillaries supplying the myenteric ganglia.[14] 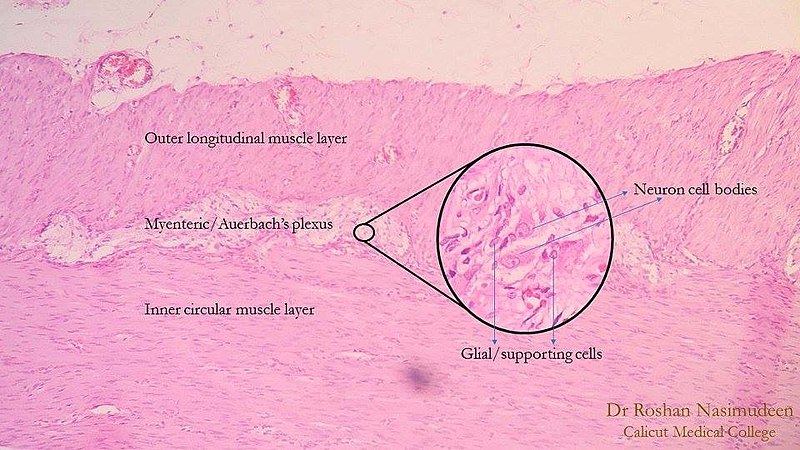 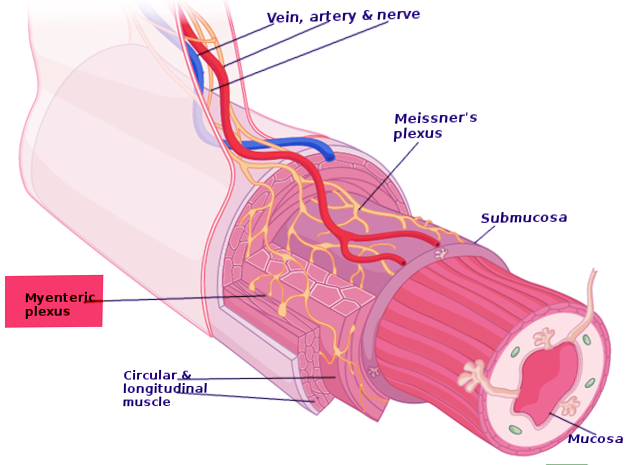 Gershon MD,Bursztajn S, Properties of the enteric nervous system: limitation of access of intravascular macromolecules to the myenteric plexus and muscularis externa. The Journal of comparative neurology. 1978 Aug 1;     [PubMed PMID: 659670]