Ankylosing spondylitis (AS) is a chronic, inflammatory disease of the axial spine. Chronic back pain and progressive spinal stiffness are the most common features of this disease. Involvement of the spine, sacroiliac joints, peripheral joints, digits, and entheses are characteristic. Impaired spinal mobility, postural abnormalities, buttock pain, hip pain, peripheral arthritis, enthesitis, and dactylitis are all commonly associated with ankylosing spondylitis. This activity reviews the evaluation and management of ankylosing spondylitis and highlights the role of the interprofessional team in evaluating and improving care for patients with this condition.

Ankylosing spondylitis (AS) is a chronic, inflammatory disease of the axial spine that can manifest with various clinical signs and symptoms. Chronic back pain and progressive spinal stiffness are the most common features of the disease. Involvement of the spine and sacroiliac (SI) joints, peripheral joints, digits, entheses are characteristic of the disease. Impaired spinal mobility, postural abnormalities, buttock pain, hip pain, peripheral arthritis, enthesitis, and dactylitis ("sausage digits") are all associated with AS.

Extraskeletal organs may also be affected by this disease. The most common extraarticular manifestations of AS include inflammatory bowel disease (up to 50%), acute anterior uveitis (25% to 35%), and psoriasis (approximately 10%). AS is also associated with an increased risk of cardiovascular disease. The cause of this increased risk has been postulated to be due to the systemic inflammation evident in AS. Pulmonary complications are also associated with AS, as diminished chest wall expansion and decreased spinal mobility predispose patients to a restrictive pulmonary pattern.

Finally, AS predisposes people to at least a two-fold increased incidence of vertebral fragility fractures. These patients are also at increased risk of atlantoaxial subluxation, spinal cord injury, and, rarely, cauda equina syndrome.[1][2][3]

Ankylosing spondylitis (AS) is a chronic inflammatory disease with an insidious onset. Progressive musculoskeletal, and often extraskeletal, signs and symptoms are characteristic of the disease. The rate of progression can vary from one patient to the next. The primary pathology of spondyloarthropathies is enthesitis with chronic inflammation, including CD4 and CD8 T lymphocytes and macrophages. Cytokines, particularly tumor necrosis factor-α (TNF-α) and transforming growth factor-β (TGF-β), are also important in the inflammatory process by leading to inflammation, fibrosis, and ossification at sites of enthesitis.

A comprehensive, full-body evaluation should be performed in patients suspected of having ankylosing spondylitis (AS) due to the pervasive nature of the disease and susceptibility to multi-organ system involvement. Almost all patients will complain of back pain to some degree. The characteristic type of back pain in AS is "inflammatory" in nature. Inflammatory back pain typically exhibits at least four of the five following characteristics: age of onset less than 40 years, insidious onset, improvement with exercise, no improvement with rest, and pain at night with an improvement upon arising. Spinal stiffness, immobility, and postural changes, especially hyperkyphosis, are also commonly seen. History and physical exam should address all systems, as AS can have several axial and peripheral musculoskeletal manifestations, as well as extra-articular features. A detailed medical history should be obtained to rule in/out any correlated conditions (e.g., psoriasis, inflammatory bowel disease, uveitis, among others).

Laboratory findings in ankylosing spondylitis (AS) are generally nonspecific but may help assist with diagnosis. About 50% to 70% of patients with active AS have elevated acute phase reactants, such as erythrocyte sedimentation rate (ESR) and elevated C-reactive protein (CRP). A normal ESR and CRP, however, should not exclude the disease.[7][8][9]

A number of imaging abnormalities, especially those affecting the spine and sacroiliac joints, are characteristic of AS. In fact, according to the assessment of spondyloarthritis international society (ASAS) 2009 axial SpA criteria, evidence of sacroiliitis on imaging (radiographic or MRI) is a major inclusion criterion for AS. A standardized plain radiographic grading scale exists for sacroiliitis, which ranges from normal (0) to most severe (IV), as detailed below.

A series of plain radiographic changes characteristic of AS can progressively develop over the course of the disease. An early sign is "squaring" of the vertebral bodies, best seen on lateral x-ray. This is seen as a loss of normal concavity of the anterior and posterior borders of the vertebral body due to inflammation and bone deposition. Romanus lesions, or the "shiny corner sign," can also be seen on this radiographic view in the early stages. These lesions are characterized by small erosions and reactive sclerosis at the corners of the vertebral bodies. Late-stage findings include ankylosis (fusion) of the facet joints of the spine, syndesmophytes, and calcification of the anterior longitudinal ligament, supraspinous ligaments, and interspinous ligaments. This calcification may be seen on imaging as the "dagger sign," which is represented as a single radiodense line running vertically down the spine on frontal radiographs. The classic radiographic finding in late-stage AS is the "bamboo spine sign," which refers to the vertebral body fusion by syndesmophytes. A bamboo spine typically involves the thoracolumbar or lumbosacral junctions. It is this fusion of the spine that predisposes the patient to progressive back stiffness.

While plain radiography is the first-line imaging modality in AS, MRI may be needed to reveal more subtle abnormalities such as fatty changes or inflammatory changes. Active SI joint inflammatory lesions appear as bone marrow edema (BME) on short tau inversion recovery (STIR) and T2-weighted images with fat suppression. It should be noted that the presence of BME on MRI can also be seen in up to 23% of patients with mechanical back pain and 7% of healthy people.[10]

Treatment goals should focus on relieving pain and stiffness, maintaining axial spine motion and functional ability, and preventing spinal complications. Non-pharmacologic interventions should include regular exercise, postural training, and physical therapy. First-line medication therapy is with long-term, daily non-steroidal anti-inflammatory drugs (NSAIDs). Should NSAIDs not provide adequate relief, they can be combined with or substituted for tumor necrosis factor inhibitors (TNF-Is) such as adalimumab, infliximab, or etanercept. Response to NSAIDs should be assessed four to six weeks after initiation and twelve weeks following initiation of TNF-Is. Systemic glucocorticoids are not recommended, but local steroid injections may be considered. Specialist referrals may be warranted based on the patient's clinical picture, potential complications, and extra-articular manifestations of the disease. Rheumatologists may assist in a formal diagnosis, management, and monitoring, while dermatologists, ophthalmologists, and gastroenterologists may assist with associated non-musculoskeletal features of AS.[11][1][12]

Certain diseases and conditions can mimic ankylosing spondylitis (AS) and must be ruled out. These include, but are not limited to:

Each of these diagnoses has similarities with AS, but their differences should be ruled in or out for accurate diagnosis.

Lumbar spinal stenosis (LSS) is a narrowing of the spinal canal that exerts pressure on the spinal cord. Like AS, it may present with chronic back pain and morning stiffness. Unlike AS, however, LSS usually presents in patients older than 60 years, is not associated with peripheral arthritis or extraskeletal features, and response to NSAIDs is variable.

Rheumatoid arthritis (RA) is another chronic inflammatory disorder of the joints that often presents with progressive back pain and morning stiffness in patients 40 or younger, similar to AS. However, peripheral arthritis is extremely common in RA, unlike in AS. In addition, rheumatoid nodules are pathognomonic for RA but are not usually present with AS.

Diffuse idiopathic skeletal hyperostosis (DISH) is a degenerative disorder characterized by ossification in the spine occurring primarily in the anterior longitudinal ligament, paravertebral tissues, and peripheral aspect of the annulus fibrosus. Similar to AS, the DISH may present with a history of postural changes and back pain. Unlike AS, which is an inflammatory disorder, the DISH does not have inflammatory characteristics such as morning stiffness or improvement with exercise but not with rest. DISH also shows no evidence of sacroiliitis on radiographs.

While the younger age of onset in ankylosing spondylitis (AS) patients is associated with poorer function outcomes, severe physical disability is uncommon. Most patients remain fully functional and able to work. Patients with the severe, long-standing disease have greater mortality compared with the general population, predominantly due to cardiovascular complications.

Ankylosing spondylitis (AS) has articular and extra-articular complications. These include:

Patient education is very important in the management of ankylosing spondylitis (AS). Patients should be educated about the long-term nature of the illness and the use and toxicities of medications. Inform patients that proper exercise programs are useful in reducing symptoms, to remain functional, physical therapy is highly recommended. Both water therapy and swimming are known to help maintain fitness and lower morbidity. Because of pulmonary involvement in AS, smoking cessation is recommended.

Prevention of disease morbidity can be achieved with exercise, physical therapy, tailored pharmacologic intervention, and regimented follow-up appointments with providers.

Ankylosing spondylitis (AS) is a systemic disorder that can affect many organ systems and hence an interprofessional team approach is recommended to avoid the morbidity.

There are many reports indicating that an interprofessional approach to ankylosing spondylitis can improve function, lower pain and increase the quality of life.[13][14] (Level II)

Meta-analysis of many studies has revealed that those who participate in an exercise program have a much better outcome than those who lead a sedentary lifestyle. (Level II) Unfortunately, those patients with large symptom burden at the time of diagnosis usually have poor response rates and are often lost to follow up. One way to retain these patients is by starting an education program early in the disease.[15][16][17] (Level V) 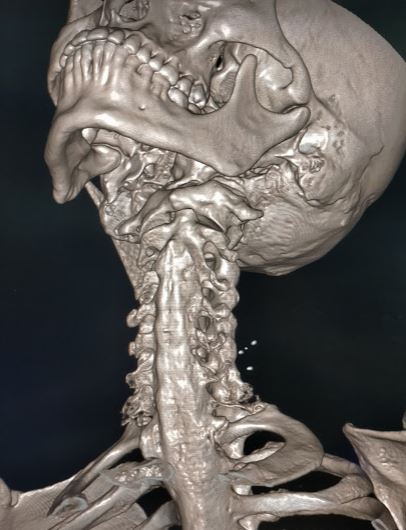 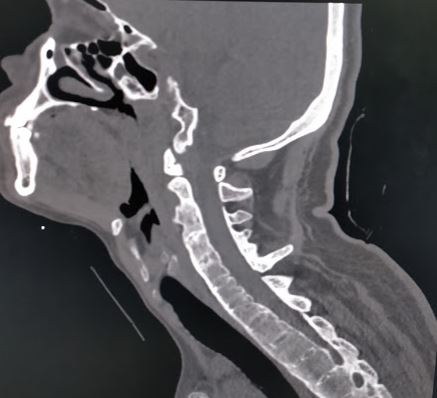 Kucybała I,Urbanik A,Wojciechowski W, Radiologic approach to axial spondyloarthritis: where are we now and where are we heading? Rheumatology international. 2018 Aug 21     [PubMed PMID: 30132215]