Androgenetic alopecia is a genetically predetermined disorder due to an excessive response to androgens. This condition affects up to 50 percent of males and females and is characterized by progressive loss of terminal hair of the scalp any time after puberty. It follows a characteristic distribution in both males and females. In males, hair loss is most prominent in the vertex and frontotemporal regions, while in women the frontal hairline is typically spared with diffuse hair loss at the crown and top of head, with loss often marked by a wider center part. This activity examines when this condition should be considered on differential diagnosis and how to properly evaluate for it. This activity highlights the role of the interprofessional team in caring for patients with this condition.

Pattern or androgenetic alopecia is a genetically predetermined disorder due to excessive response to androgens which affects up to 50% of males and females. It is characterized by progressive loss of terminal hair of the scalp any time after puberty, in a characteristic distribution in both males and females. In males, hair loss is most prominent in the vertex and frontotemporal regions, while in women the frontal hairline is typically spared with diffuse apical hair loss noted as a wider anterior part of the hair.. [1][2][3]

Androgenetic alopecia, as the name suggests has a clear genetic predisposition and is likely due to an excessive response to androgen.[4][5]

Pattern alopecia is a polygenic disorder with variable penetrance, and both maternal and paternal genes are involved. There is a familial predisposition to androgenetic alopecia with sons at a five to six time higher relative risk if their fathers were balding.

Pattern alopecia also requires androgen to occur. It develops only after puberty. Males castrated before puberty and those with androgen insensitivity syndrome do not have pattern baldness. It is clear that both hormone metabolism and androgen receptor play a key role in pattern alopecia.

White patients are most affected followed by Asians and African Americans, then Native Americans and Eskimos. The incidence approximates the age in Caucasian males, with 50% affected by 50 years old and up to 80% affected by 70 years old. In females, the disorder is quite common, with an increase in incidence after menopause.[6][7]

Activation of the androgen receptor shortens the anagen or growth phase in the normal hair growth cycle. In androgenetic alopecia, excessive activation leads to follicular miniaturization through a progressively shorter anagen phase, resulting in thinner and shorter hair follicles which in the end may not even penetrate through the epidermis. Pathological specimens will show a decreased 5:0 ratio of anagen to telogen hair where the norm is 12:1.[8][9]

Androgenetic alopecia patients have higher production of dihydrotestosterone, and higher levels of 5 alpha-reductase and androgen receptors in balding scalp.

The normal hair growth cycle consists of four phases: anagen (growth), catagen (involution), telogen (resting), and exogen (shedding of hair). Eighty percent to 90% of hair is in the anagen phase which lasts 2 to 6 years and determines the hair length; less than 5% are in catagen, and the rest are in telogen. Shedding of 100 hairs a day (exogen) is normal.

Androgenetic alopecia is gradual in onset and occurs after puberty. In men, it begins as bitemporal thinning of frontal scalp first then involves the vertex. In women, it is noted as thinning of hair between the frontal and the vertex of the scalp without affecting the frontal hairline and usually demonstrated as a wider part or a visible scalp.

In men, early androgenetic alopecia is defined as occurring before 30 years old and is seen as the male phenotypic equivalent to a polycystic ovarian syndrome.

In women, pattern baldness is often unmasked by telogen effluvium, which occurs 1 to 6 months after a stressor causes a larger portion of the hair to shift from the anagen phase to the telogen phase, leading to an increasing number of hair follicles in the exogen phase.

In both males and females, it is not known how far pattern baldness will progress.

Androgenetic alopecia is usually diagnosed clinically with a history of gradual onset, occurring after puberty, and often but not necessarily, a family history of baldness. A biopsy is usually not necessary unless the diagnosis is unclear. Dermoscopy shows miniaturized hair and brown perihilar casts which can help differentiate from diffuse alopecia areata that mimics male pattern baldness as diffuse alopecia areata will have tapered fractures such as exclamation point hairs.[8][6]

A thorough review of systems, past medical history, and the patient's medication list is important to ensure other causes are not present for hair loss or other reasons for the unmasking of the androgenetic alopecia. Thyroid studies, CBC, screening for iron deficiency with iron, total iron binding capacity, and ferritin may be warranted. Screen for syphilis if suspected. A quick psychiatric screen for depressive symptoms and other psychiatric disorders may also be warranted in all hair loss patients visiting a dermatologist.

There are two FDA approved drugs for pattern baldness: topical minoxidil and finasteride, both of which require at least a 4- to 6-month trial before noticing improvement and must be used indefinitely to maintain a response. As such, medication adherence often can be poor. Furthermore, initiation of the drug may cause an initial shedding phase. They work better together. [10][11]

Topical minoxidil is available over-the-counter and in various strengths, up to 5% solution. Higher strengths are more effective. The most common adverse effects are pruritus and local irritation with resulting flaking. The latter is usually due to propylene glycol or alcohol in the formulation of the drug. Minoxidil is a potassium channel blocker and widens blood vessels which hypothetically allow more oxygen, blood, and nutrients to follicles and promote the anagen phase.

Finasteride is a 5 alpha-reductase type 2 inhibitor and not an anti-androgen. [12] It is prescribed at 1 mg daily and is more effective at increasing hair regrowth at the vertex than the frontal area of the scalp. The efficacy of finasteride is unclear in female pattern baldness and contraindicated for women with reproductive potential (Category X) as it can cause a male fetus to develop ambiguous genitalia. Adverse effects include sexual dysfunction, which usually reduces with time; increased risk of high-grade prostate cancer because PSA is masked and detected later; and case reports of persistent diminished libido and erectile dysfunction.

In women, oral antiandrogens such as spironolactone are often used. Spironolactone is a very weak partial agonist to the androgen receptor, blocking the much more potent DHT and free testosterone from interacting with the androgen receptor, thus physiologically behaving like a direct antagonist. It also inhibits androgen synthesis and enhances conversion of testosterone to estradiol. Cyproterone acetate may be used internationally but is not available in the United States. Anti-androgens are more effective if there are other signs of virilization.

Hair transplant is effective and cosmetically satisfactory to the patient. However, patients need to have a sufficient number of donor plugs (greater than 40 follicular units/cm2) to cover the bald area. New techniques have made hair transplant more cosmetically pleasing and natural looking.

Red light or laser at 660 nm also has demonstrated efficacy for hair loss and is available OTC for pattern baldness.

Other proposed treatments include saw palmetto extract (Serenoa Repens); prostaglandin analogs like latanoprost and bimatoprost, which may be cost prohibitive; and multiple growth factors, which are a theoretical reason why platelet-rich plasma and adipose-derived stem cells may be used as adjunctive to treatments listed.

Androgenetic alopecia is very common, and for both females and males, the problem is poor cosmesis. The condition is frequently encountered in the dermatology clinic. Most patients are embarrassed to seek medical help and often turn to the internet for remedies. The key to this disorder is patient education. The pharmacist is in the prime position to educate the public on the causes and treatment of androgenetic alopecia. While some men progress to complete baldness within a few years, other may have patterned thinning of the scalp. Women tend to lose hair on the crown and rarely develop complete baldness. Once hair is lost, the scalp is exposed to the UV rays of the sun, and there is accumulating evidence that this increases the risk of actinic keratosis. More important, in males androgenetic alopecia is associated with a higher risk of adverse cardiac events. In females, androgenetic alopecia has been linked to polycystic ovarian disease. Despite the availability of a number of medications and hair transplant, neither works well, and the results are unpredictable. For patients who are not bothered by the hair thinning, simple assurance that this is a benign disorder is all that is required. Clinicians, nurses, and pharmacist need to work together to educate patients about this disturbing problem. [3][13][14] 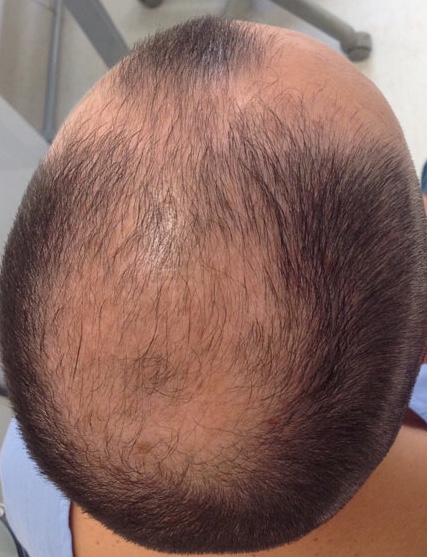