Through the process of glycolysis, one molecule of glucose breaks down to form two molecules of pyruvate. Depending on the microcellular environment (specifically, oxygen availability, energy demand, and the presence or absence of mitochondria), pyruvate has several separate fates:

In erythrocytes and oxygen-deprived tissue, pyruvate remains within the cytoplasm and converts to lactate, a process referred to as anaerobic glycolysis. This final reaction allows for the regeneration of NAD+, a cofactor that must be available in high enough intracellular concentrations for the earlier reactions of glycolysis to remain favorable. Compared to oxidative phosphorylation, however, anaerobic glycolysis is significantly less efficient, providing a net production of only 2 ATP per glucose molecule (versus 32 ATP per glucose molecule produced during oxidative phosphorylation).[1]

Glycolysis is the process by which glucose is broken down within the cytoplasm of a cell to form pyruvate. Under aerobic conditions, pyruvate can diffuse into mitochondria, where it enters the citric acid cycle and generates reducing equivalents in the form of NADH and FADH2. These reducing equivalents then enter the electron transport chain, leading to the production of 32 ATP per molecule of glucose. Because the electron transport chain requires oxygen as the final electron acceptor, inadequate tissue oxygenation inhibits the process of oxidative phosphorylation.

Under anaerobic conditions, pyruvate has a different fate. Instead of entering mitochondria, the cytosolic enzyme lactate dehydrogenase converts pyruvate to lactate. Although lactate itself is not utilized by the cell as a direct energy source, this reaction also allows for the regeneration of NAD+ from NADH. NAD+ is an oxidizing cofactor necessary to maintain the flow of glucose through glycolysis. Glycolysis produces 2 ATP per glucose molecule, and thus provides a direct means of producing energy in the absence of oxygen. This process of breaking down glucose in the absence of oxygen is aptly named anaerobic glycolysis.[1]

Additionally, cells that do not contain mitochondria (e.g., erythrocytes) cannot perform oxidative phosphorylation.[2] The enzymes of the citric acid cycle are in the mitochondrial matrix, and the enzymes of the electron transport chain are embedded within the inner mitochondrial membrane. Consequently, these cells rely on anaerobic glycolysis for ATP production regardless of oxygen concentrations.

Relative to oxidative phosphorylation, which maximizes the energy potential of a single glucose molecule (approximately 32 molecules of ATP per 1 molecule of glucose), glycolysis is an inefficient means of energy production. Glycolysis produces only two net molecules of ATP per 1 molecule of glucose. However, in cells lacking mitochondria and/or adequate oxygen supply, glycolysis is the sole process by which such cells can produce ATP from glucose. Additionally, in maximally contracted skeletal muscle, glycolysis is a quick and relatively efficient means of meeting short-term energy goals.

The steps of glycolysis are as follows:

The microenvironment of the cell determines the fate of pyruvate following the initial ten steps of glycolysis. If a cell lacks mitochondria, is poorly oxygenated, or energy demand has rapidly increased to exceed the rate at which oxidative phosphorylation can provide sufficient ATP, pyruvate can be converted to lactate by the enzyme lactate dehydrogenase.[1] This step involves the oxidation of NADH to NAD+, allowing glycolysis to continue through the glyceraldehyde-3-phosphate dehydrogenase reaction (step #6, see above).

Lactic acid, the end product of anaerobic glycolysis, is commonly measured in the inpatient setting. Because anaerobic glycolysis predominates when tissue is poorly oxygenated or perfused, lactic acid levels are useful in directing the management of severe sepsis, shock, blood loss, anemia, or heart failure. Hyperlactatemia and lactic acidosis are indicative of inefficient cardiac output and are associated with increased morbidity and mortality.[6][7][8] 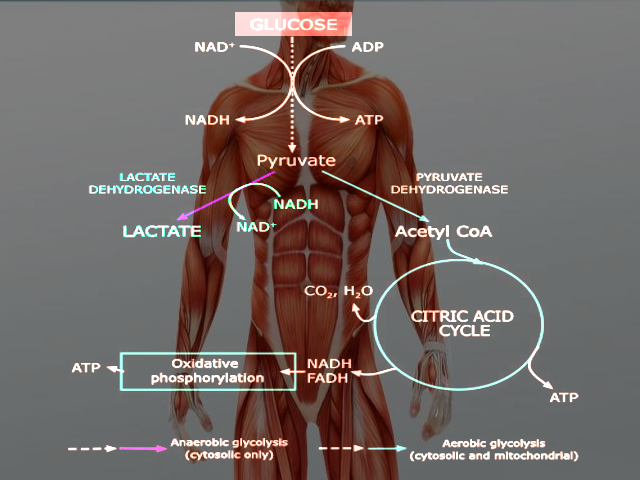 Suetrong B,Walley KR, Lactic Acidosis in Sepsis: It's Not All Anaerobic: Implications for Diagnosis and Management. Chest. 2016 Jan;     [PubMed PMID: 26378980]