Addison disease is a relatively rare condition, which can have devastating consequences if not promptly recognized and appropriately treated. Often the insidious nature of the disease results in a delay in diagnosis in patients who are not recognized until an acute adrenal crisis develops. Improving inter-professional team members' awareness of this condition will improve outcomes for patients who have Addison disease. This activity describes the etiology, epidemiology, presentation, evaluation, and treatment of Addison's disease. It highlights the importance of the inter-professional team in recognizing and managing this condition.

This is caused by an inability of the adrenal cortices to produce adequate adrenocortical hormones. Adrenal insufficiency is classified as primary or secondary.[3]

Any disease process which causes direct injury to the adrenal cortex can result in primary adrenal insufficiency (Addison disease).

Infections: This includes sepsis, tuberculosis, cytomegalovirus, and HIV.[8]  The prevalence of tuberculosis has declined, but HIV has emerged as the most important cause of adrenal insufficiency associated with adrenal necrosis.[9] Other infectious causes include disseminated fungal infections, histoplasmosis, and syphilis. Blastomycosis is a common cause in South America.

Adrenal Hemorrhage: Bilateral adrenal hemorrhages can be precipitated by DIC, trauma, meningococcemia, neoplastic processes. An Adrenal crisis due to meningococcemia is known as the Waterhouse-Friderichsen syndrome.[10]  This is more common in children and patients with asplenia.

Other causes include sarcoidosis, lymphoma, and genetic disorders such as congenital adrenal hyperplasia and adrenal leukodystrophy.[11][12] Wolman disease is a rare inborn error of metabolism that presents with diarrhea, hepatosplenomegaly, failure to thrive, and calcification of adrenal glands.[13] Anti-phospholipid antibody syndrome has been identified as a cause of adrenal insufficiency.[14]

Secondary insufficiency occurs most commonly due to exogenous steroid administration resulting in the suppression of ACTH synthesis. It is a pituitary-dependent loss of ACTH secretion, which results in a reduction of glucocorticoid production. However, mineralocorticoid secretion, including aldosterone, remains at a relatively normal level.[18] It is more common than primary insufficiency. Symptoms usually occur after discontinuation of the steroid.

Risk factors for the autoimmune (most common) type  of Addison's disease include other autoimmune diseases:

Adrenal failure in Addison disease results in decreased cortisol production initially followed by that of aldosterone, both of which will eventually result in an elevation of adrenocorticotropic (ACTH) and melanocyte-stimulating hormone (MSH) hormones due to the loss of negative feedback inhibition.[19]

Addison disease usually manifests as an insidious and gradual onset of non-specific symptoms, often resulting in a delayed diagnosis. The symptoms may worsen over a period of time, which makes early recognition difficult. A high clinical suspicion should be maintained to avoid misdiagnosis.[20] In many cases, the diagnosis is made only after the patient presents with an acute adrenal crisis (hypotension, hyponatremia, hyperkalemia, and hypoglycemia). This may be precipitated by a stressful illness or such triggering factors such as infection, trauma, surgery, vomiting, or diarrhea.[21] Significant stress or illness can unmask cortisol and mineralocorticoid deficiency.

Addison disease can occur at any age but most often presents during the second or third decades of life. The initial presentation includes fatigue, generalized weakness, weight loss, nausea, vomiting, abdominal pain, dizziness, tachycardia, and/or postural hypotension. Hyperpigmentation is characteristic and occurs in almost all patients. It is usually generalized and most prominent in sun-exposed and pressure areas. Elevated ACTH and melanocyte-stimulating hormone are causative factors. It is believed that ACTH binds to the melanocyte receptors, which are responsible for pigmentation. Hyperpigmentation is more pronounced over palmar creases, gingival mucosa, lips (particularly vermilion border), elbows, knuckles, posterior neck, breast areola, nipples, and nail beds.  Hyperpigmentation is not seen in secondary insufficiency because ACTH and MSH levels are low. Multiple new nevi may develop. Decreased or sparse axillary and pubic hair may occur in female patients.

Due to its variable presentation, a high index of suspicion for Addison disease is necessary when evaluating a conglomeration of non-specific symptoms. These may include unexplained fatigue, poor appetite, chronic abdominal pain, or weight loss. Hyponatremia with or without hyperkalemia and/or hypotension can often be seen in Addison disease. Addisonian crisis is often manifested by severe dehydration, confusion, refractory hypotension, and shock. It is more likely to occur in primary adrenal insufficiency than secondary adrenal insufficiency.

The diagnosis is established by demonstrating low cortisol and aldosterone levels, high renin level, and a blunt cortisol response with ACTH stimulation. The approach for the evaluation s as follows;

Slight elevation of TSH level can occur in adrenal insufficiency. This occurs due to a decrease in cortisol level and abnormal TSH circadian rhythm.[23] If TSH elevation persists, a possibility of hypothyroidism should be considered.

Anti-adrenal antibodies (such as 21-hydroxylase antibodies) serve as the markers of autoimmune destruction of the adrenal gland. The 21-hydroxylase enzyme is essential for cortisol synthesis in the adrenal cortex. This may be helpful to determine the cause of Addison disease. It is also important to evaluate other organ-specific autoimmune conditions.

A chest radiograph may reveal a small heart; this may be due to a decrease in the cardiac workload. In suspected cases of adrenal hemorrhage, an abdominal CT scan may provide useful information in determining the cause. For example, bilateral enlargement of the adrenal glands may be seen with adrenal hemorrhage.

A magnetic resonance imaging (MRI) of the hypothalamic-pituitary region should be obtained if ACTH is inappropriately low in the presence of cortisol deficiency. A pituitary baseline profile should also be obtained. The radiographic findings are non-specific. A biochemical diagnosis of adrenal insufficiency should be made before obtaining radiographic studies.

Additional studies should be directed to determine the underlying cause. A PPD test should be performed to evaluate for tuberculosis. Plasma very-long-chain fatty acid profile should be obtained in cases where adrenal leukodystrophy is suspected. Complete blood count (CBC) may reveal neutropenia, lymphocytosis, and eosinophilia. ECG may show tall and peaked T waves if hyperkalemia is present. Histology is useful to investigate infiltrative causes of adrenal insufficiency. The finding of caseating granulomas may suggest tuberculosis, whereas a non-caseating granuloma may be due to sarcoidosis.[24][25]

Early recognition is critical for the management of adrenal insufficiency. Addison crisis is a severe endocrine emergency; immediate recognition and treatment are required. Beware that if not recognized and treated, the adrenal crisis can be fatal. The confirmatory laboratory evaluation should not delay the treatment. Blood samples should be obtained for subsequent measurement of ACTH and cortisol levels. The elevation of ACTH with low cortisol is diagnostic of a primary adrenal insufficiency. Measurement of cortisol in the ACTH stimulation test may be performed when initial laboratory evaluation cannot establish the diagnosis. Plasma renin level is often elevated and is indicative of a mineralocorticoid deficiency, accompanied by a low aldosterone level.[26][27][28]

Patients with an adrenal crisis require the following:

The immediate hormonal treatment is the administration of hydrocortisone. The initial dose for adrenal crisis is 100 mg IV bolus, followed by 50 to 100 mg IV every 6 hours over 24 hours. In children, the dose is 50 mg/m^2 (max: 100 mg) IV bolus, followed by 50 to 100 mg/m^2.  Since this dose has significant mineralocorticoid activity, mineralocorticoids such as fludrocortisone are unnecessary during the acute phase.[29] Dexamethasone 4-mg IV bolus can be considered in the ED when emergent steroids administration is required; it is less likely to interfere with the serum cortisol assays. It is long-acting and does not interfere with biochemical assays of endogenous glucocorticoid production. Prednisone and dexamethasone have little or no mineralocorticoid activity. The initial fluid replacement is normal saline bolus followed by 5% glucose in isotonic saline. Hypoglycemia should be treated promptly.

Life-long treatment with hormonal replacement is required. Maintenance therapy aims to provide a replacement to maintain a physiologic glucocorticoid and mineralocorticoid level.  The usual doses are as follows;

Doses should be adjusted according to the clinical response and normalization of electrolyte abnormalities. To minimize adverse effects, the dose should be titrated to the lowest possible dose that controls symptoms; ensure the patient is clinically well.  Plasma Renin level can also be used to adjust the doses. Serum ACTH levels may vary significantly and cannot be used for dose adjustment. It is important to consider concurrent medications when deciding the glucocorticoid dose. For example, certain drugs such as Rifampin can increase hepatic glucocorticoid metabolism and may inactivate cortisol. Dexamethasone is not an appropriate choice for maintenance treatment; the dose titration is difficult and increases the risk of the Cushing effect.[30]

In children, the initial hydrocortisone dose is  8 mg/m^2/day orally; this can be divided into 3 or 4 doses.

Fludrocortisone should be administered at a sufficient dose to keep the plasma renin level in the reference range.[31] An elevated PRA indicates a higher dose of fludrocortisone is required. The mineralocorticoid dosage should be tailored to address the degree of stress. Furthermore, the identification and treatment of underlying causes such as sepsis are critical for an optimal outcome. The treatment of associated conditions should also be provided.

Many features of sepsis overlap with adrenal insufficiency. The presentation includes weakness, fatigue, vomiting, hypotension, and shock. The confirmation of primary adrenal insufficiency diagnosis is made by low cortisol response to ACTH stimulation test and low ACTH level.

Shock (due to any cause)

The presentation may be similar to fever, fatigue, and myalgias may occur in both conditions. However, exudative pharyngitis is present in this condition. IgM antibodies to viral capsid antigen are present.

As with adrenal insufficiency, fatigue may be present in hypothyroidism. However, it is associated with weight gain. The cortisol level should differentiate both conditions.

A delay in initiating the treatment can have serious consequences and may increase rates of morbidity and mortality.[33]

Addison disease can develop into an adrenal crisis if not recognized and promptly treated. This can result in hypotension, shock, hypoglycemia, acute cardiovascular decompensation, and death. Patients with adrenal insufficiency are also at higher risk of death due to infections, cancer, and cardiovascular causes. Delayed recognition and treatment of hypoglycemia can cause neurologic consequences. A supraphysiologic glucocorticoid replacement can lead to the development of Cushing syndrome.[33] Growth suppression can occur in children. Premature ovarian failure or primary ovarian insufficiency may develop in up to 10% of women with Addison disease.[36]

The treatment plan should be developed in consultation with an endocrinologist. All patients with an adrenal crisis should be consulted with intensivists and admitted to an intensive care unit (ICU). Patients who are ill-appearing and present with shock should be admitted to ICU.

Patients with Addison disease should receive education about management and monitoring.

Addison disease is a life-threatening condition that requires accurate diagnosis and prompt treatment. If the diagnosis is delayed, it carries high morbidity and mortality. Thus, the condition is best managed by an interprofessional team of healthcare workers that include an endocrinologist, an intensivist, an infectious disease specialist, and a pharmacist. The education of the patient is critical for patients with chronic conditions. Physicians, nurses, and pharmacists can share this responsibility. Nurses need to administer treatments, monitor patients, and provide updates to the team. Once the diagnosis is established, the outcomes depend on the primary cause. Any delay in initiating the treatment can lead to poor outcomes. All patients who have Addison disease must be urged to wear a medical alert bracelet. Patients should be educated regarding the signs and symptoms. They should be urged to contact their primary care provider if there are any warning symptoms. Finally, in times of stress, such as fever, patients should be instructed to double the dose of steroids and see their primary care provider.[37][26] [Level 5] 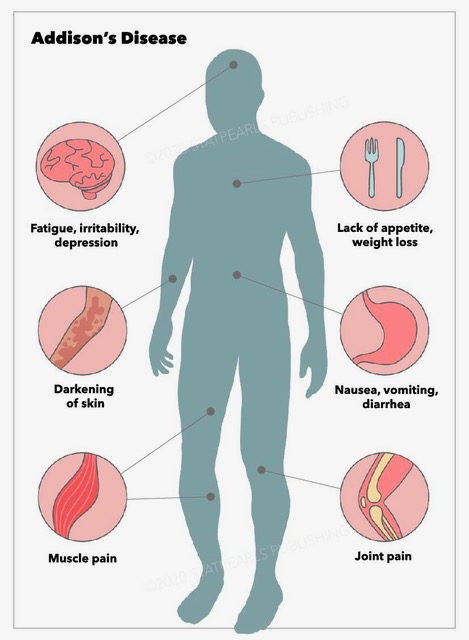