Achilles tendon rupture is the most common tendon rupture in the lower extremity.  The injury most commonly occurs in adults in their third to fifth decade of life. [1]  Acute ruptures often present with sudden onset of pain associated with a "snapping" or audible "pop" heard at the site of injury.  Patients can describe the sensation of being kicked in the lower leg. The injury is causes significant pain and disability in patient populations.

Achilles tendon injuries typically occur in individuals who are only active intermittently (i.e., the "weekend warrior" athletes). The injury is reportedly misdiagnosed as an ankle sprain in 20% to 25% of patients.  Moreover, patients in their third to the fifth decade of life are most commonly affected as 10% report a history of prodromal symptoms, and known risk factors include prior intratendinous degeneration (i.e., tendinosis), fluoroquinolone use, steroid injections, and inflammatory arthritides.[2][3][4][5]

The exact cause of Achilles tendon injury appears to be multifactorial. The injury is most common in cyclists, runners, volleyball players, and gymnasts. When the ankle is subject to extreme pronation, it places enormous stress on the tendon, leading to injury. In cyclists, the combination of low saddle height and extreme dorsiflexion during pedaling may also be a factor in an overuse injury.

Systemic diseases that may be associated with Achilles tendon injuries include the following:

Foot problems that increase the risk of Achilles tendon injuries include the following:

The incidence rates of Achilles tendon ruptures varies in the literature, with recent studies reporting a rate of 18 patients per 100,000 patient population annually.  In regard to athletic populations, the incidence rate of achilles tendon injuries ranges from 6% to 18%, and football players are the least likely to develop this problem compared to gymnasts and tennis players. It is believed that about a million athletes suffer from Achilles tendon injuries each year.

The true incidence of Achilles tendinosis is unknown, although reported incidence rates are 7% to 18% in runners, 9% in dancers, 5% in gymnasts, 2% in tennis players, and less than 1% in American football players. It is estimated that Achilles disorders affect approximately 1 million athletes per year.[9]

Achilles tendon injuries appear to be more common in males, and this is probably related to greater participation in sports activities. Most injuries are seen in between the third and fifth decade of life. Many of these individuals are only active intermittently and rarely warm up.

Achilles tendonitis is often not associated with primary prostaglandin-mediated inflammation. It appears there is a neurogenic inflammation with the presence of calcitonin gene-related peptide and substance P present. Histopathological studies reveal thickening and fibrin adhesions of the tendon with the occasional disarray of the fibers.

Neurovascularization is frequently seen in the degenerating tendon, which is also associated with pain. Tendon rupture is usually the terminal event during the degeneration process. After rupture, type 111 collagen appears to be the major collagen manufactured, suggesting that the repair process is incomplete. Animal studies show that if there is more than 8% stretching of their original length, tendon rupture is most likely.

Patients often present with acute, sharp pain in the region of the Achilles tendon. On physical exam, patients with Achilles tendon rupture are unable to stand on their toes or have very weak plantar flexion of the ankle. Palpation may reveal a tendon discontinuity or signs of bruising around the posterior ankle.

The Thompson test is performed by the examiner to assess for achilles tendon continuity in the setting of suspected rupture.  The examiner places the patient in the prone position with the ipsilateral knee flexed to about 90 degrees.  The foot/ankle are in the resting position.  Upon squeezing the calf, the examiner notes for the presence and degree of plantarflexion at the foot/ankle.  This should be compared to the contralateral side.  A positive (abnormal) test is strongly associated with achilles rupture.

In the setting of trauma to the lower leg, radiographs are obtained to rule out the presence of a fracture.  Based on clinical suspicion following the physical examination, the diagnosis can be confirmed with ultrasound or MRI. [10]

The initial management of Achilles tendon rupture is rest, elevation, pain control, and functional bracing. There is still debate surrounding the potential benefits versus risks of surgical intervention. Studies have demonstrated good functional results and patient satisfaction with both operative and nonoperative modalities.

Healing rates with serial casting/functional bracing are no different compared to surgical anastomosis of the tendon, but return to work may be slightly prolonged in patients treated medically. All patients require physical and orthotic therapy to help strengthen the muscles and improve range of motion of the ankle.[11][4][12]

Rehabilitation is critical to regaining maximal ankle function. While the debate remains regarding the optimal treatment modality, the general consensus includes the following:

There are several techniques for Achilles tendon repair, but all involve reapproximation of the torn ends. Sometimes the repair is reinforced by the plantaris tendon or the gastrocsoleus aponeurosis.

Overall, the healing rates between casting and surgical repair are similar. The debate about an early return to activity after surgery is now being questioned. If a cast is used, it should remain for at least 6-12 weeks. Benefits of a non-surgical approach include no hospital admission costs, no wound complications and no risk of anesthesia. The biggest disadvantage is a risk of re-rupture which is as high as 40%.

For most patients with Achilles tendon rupture, the prognosis is excellent. But in some non-athletes, there may be some residual deficits like a reduced range of motion.The majority of athletes are able to resume their previous sporting activity without any limitations. However, it is important to be aware that non-surgical treatment has a re-rupture rate of nearly 40% compared to only 0.5% for those treated surgically.

No matter which method is used to treat the tendon rupture, participating in an exercise program is vital. One may swim, cycle, jog or walk to increase muscle strength and range of motion.

While active patients and recreational athletes often return to baseline activity levels and work following both nonoperative and operative management of these injuries, high-level professional athletes most often report inferior results and return to play regardless of the chosen management plan.

A 2017 study from the American Journal of Sports Medicine reported professional athletes followup performance (NBA, NFL, MLB, and NHL) at 1- and 2-year followup after surgery performed between 1989 and 2013: [14]

Thus, athletes demonstrating the ability to return to play by 1-year should expect to achieve continued improvement to baseline performance by the ensuing season.

To prevent rupture of the Achilles tendon, adequate warming and stretching before physical activity is recommended.

Even though there are several treatments for Achilles tendon rupture, there is no consensus on which one to undertake. There is a wide variation in the management of Achilles tendon injury between orthopedic surgeons and sports physicians. Further, there is no uniformity in postoperative rehabilitation. Experts recommend that an interprofessional approach may help achieve better outcomes. [10][15]  (Level V) The team should include a trauma surgeon, orthopedic surgeon, rehabilitation specialist, and a sports physician. It is important that the pharmacist ensure that the patient is not on any medications that can affect the healing process. The nurse should educate the patient on the importance of stretching prior to any exercise and participating in a regular exercise program after repair.

Conservative treatment is usually preferred for non-athletes, but the risk of re-rupture is high. While surgery offers a lower risk of re-rupture, it is also associated with post-surgical complications that may delay recovery. Overall, the outcomes for Achilles tendon rupture are good to excellent after treatment.[16][17][18] (Level V) 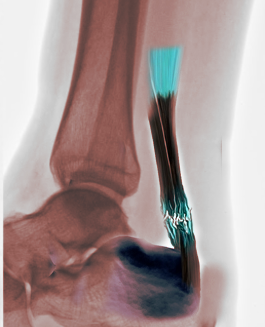 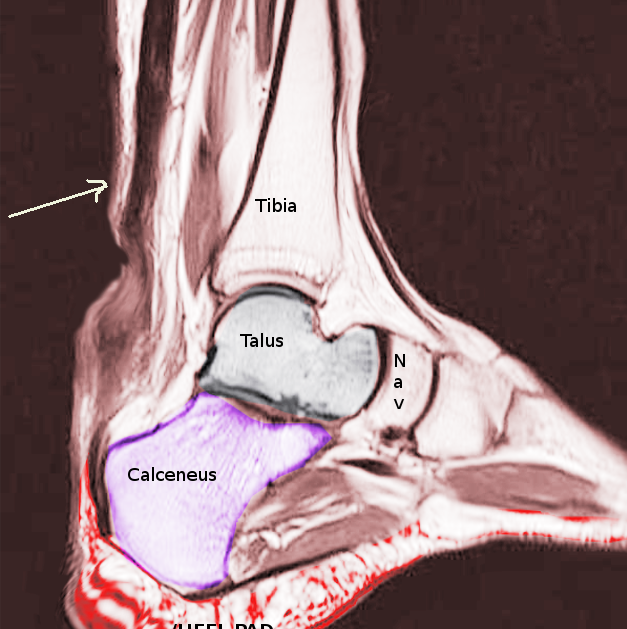 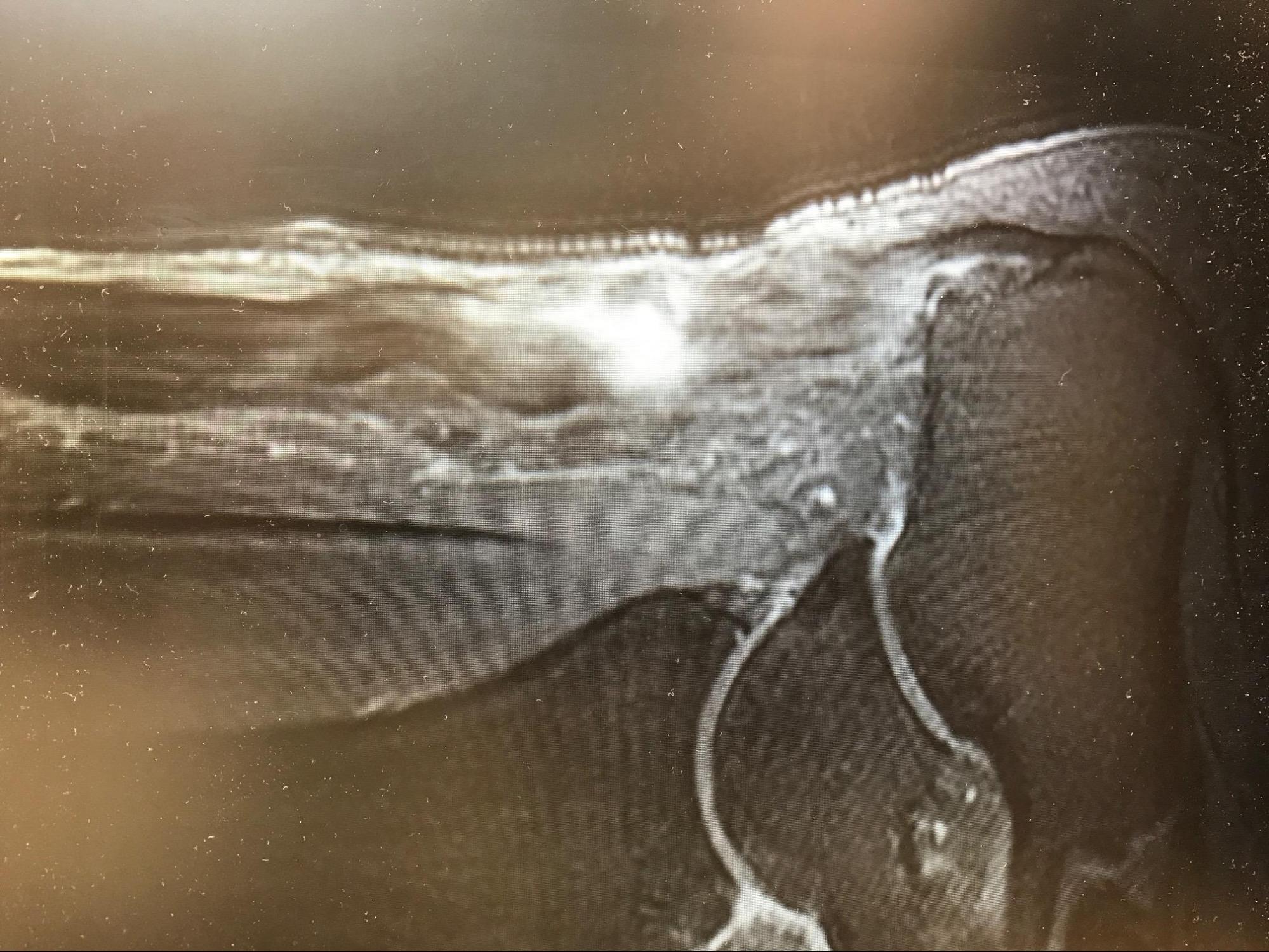 Ahmad J,Jones K, The Effect of Obesity on Surgical Treatment of Achilles Tendon Ruptures. The Journal of the American Academy of Orthopaedic Surgeons. 2017 Nov     [PubMed PMID: 28957986]