Placental abruption is the early separation of the placenta from the lining of the uterus before the completion of the second stage of labor. It is one of the causes of bleeding during the second half of pregnancy and is a relatively rare but serious complication of pregnancy that places the well-being of both mother and fetus at risk. This activity describes the pathophysiology of placental abruption and highlights the role of the interprofessional team in managing affected patients.

With the availability of blood replacement, maternal death is rare but continues to be higher than the overall maternal mortality rate. Neonatal consequences include preterm birth and low birth weight, perinatal asphyxia, stillbirth, and neonatal death. In many countries, the rate of placental abruption has been increasing, even with improved obstetrical care and monitoring techniques. This suggests a multifactorial etiology that is not well understood.[5][3]

Once the placenta has been delivered, the presence of a retroplacental clot is almost always seen. In some cases, there may be evidence of blood extravasation into the myometrium- resulting in purple discoloration of the serosa of the uterus.

The history begins with a review of the prenatal course, especially placental location on prior sonograms and if there is a history of placental abruption in previous pregnancies. Exploring the woman’s behaviors, specifically whether she smokes or uses cocaine is a critical component of history. Asking about potential trauma, especially in the abdominal area needs to be done in a tactful and supportive manner. Especially in situations of partner abuse, the woman may be reluctant to reveal that she sustained trauma to her abdomen.

The most useful mechanism for recognizing the onset of placental abruption is an assessment of the patient. The physical examination includes palpation of the uterus. The uterus is palpated for tenderness, consistency, and frequency and duration of uterine contractions, if present. The vaginal area is inspected for the presence of bleeding. However, a digital examination of the cervix should be delayed until a sonogram is obtained for placental location and to rule out a placenta previa. If bleeding is present, the quantity and characteristic of the blood, as well as the presence of clots, is evaluated. Remember, the absence of vaginal bleeding does not eliminate the diagnosis of placental abruption.

Evaluation of vital signs to detect tachycardia or hypotension, which may be indicators of a concealed hemorrhage are taken. Blood specimens such as a complete blood count (CBC), fibrinogen, clotting profile, and type and RH may be collected. These laboratory values will not aid in the diagnosis of placental abruption but will provide baseline data against which to evaluate the patient’s condition over time.

Evaluation of fetal well-being is also included in the examination. Begin with auscultation of fetal heart sounds and ask about fetal movement, specifically recent changes in activity patterns. Continuous electronic fetal monitoring is initiated to identify prolonged bradycardia, decreased variability, and the presence of late decelerations.

There are no laboratory tests or diagnostic procedures to definitively diagnose placental abruption. However, some studies may be conducted in the effort to eliminate other conditions as well as to provide baseline data.[8][9][10]

A biophysical profile may be used in the management of patients with marginal placental abruption who are being conservatively treated. A score of 6 or below is an indicator of compromised fetal status.

Blood work, including a CBC, clotting studies (fibrinogen and PT/a-PTT), and BUN provide baseline parameters to evaluate changes in the patient’s status. A type and Rh have been obtained if a blood transfusion is necessary.

The onset of placental abruption is often unexpected, sudden, and intense and requires immediate treatment. Prehospital care for the patient with a suspected placental abruption requires advanced life support and transport to a hospital with a full-service obstetrical unit and a neonatal intensive care unit. Following arrival at the hospital, most women will receive intravenous (IV) fluids and supplemental oxygen as well as continuous maternal and fetal monitoring, while the history and physical is completed. Subsequent treatment will vary based on the data collected during the assessment, the gestation of the pregnancy, and the degree of distress being experienced by the woman and/or the fetus.[11][12]

Women classified with a class 1 or mild placental abruption and no signs of maternal or fetal distress and pregnancy less than 37 weeks gestation may be managed conservatively. These patients are usually admitted to the obstetrical unit for close monitoring of maternal and fetus status. Intravenous access and blood work for type and cross-match is part of the plan of care. The maternal-fetal dyad will continue to be monitored until there is a change in condition or until fetal maturity is reached.

If the collected data results in class 2 (moderate) or class 3 (severe) classification and the fetus is viable and alive, delivery is necessary. Because of the hypertonic contractions, a vaginal birth may occur rapidly. Given the potential for coagulopathy, vaginal birth presents less risk to the mother. However, if there are signs of fetal distress an emergency cesarean birth is necessary to protect the fetus. During the surgical procedure, careful management of fluids and circulatory volume is important. Post-operatively the patient needs to be monitored for postpartum hemorrhage and alterations in the clotting profile. A neonatal team needs to be present in the delivery room to receive and manage the infant.

The prognosis depends on when the patient presents to the hospital. If the bleeding continues, both maternal and fetal lives are at stake. Partial placenta separation is associated with low mortality compared to full separation; however in both cases, without an emergent cesarean section, fetal demise may occur. Today, the condition accounts for 5 to 8% of maternal deaths.

Placental abruption is a serious complication of pregnancy and is best managed by an interprofessional team of healthcare professionals that include an obstetrician, radiologist, hematologist, obstetric nurse, and intensivist. The triage nurse should be aware of this condition and immediately admit and notify the emergency department physician. While the patient is being resuscitated, the obstetrician should be called ASAP. Immediate transfer to an ICU setting is highly recommended and blood should be crossed and typed in case needed. Placental abruption is a true obstetric emergency and requires collaboration between the anesthesiologist and a radiologist. Operating room nurses should be informed of the patient so that they have the room prepared. In case the fetus is premature, the neonatal ICU team should be notified. Only with a team approach can the morbidity and mortality of this disorder be lowered.

While the condition cannot be prevented, the patient must be encouraged to stop smoking to lower the risk. Another major risk factor is the abuse of cocaine, which must be curtailed. Some patients may benefit from drug counseling and or drug rehabilitation.[13][14] [Level 5]

Placental abruption is a life-threatening disorder for both the mother and the fetus. If the bleeding is not arrested, then the lives of the mother and fetus are in jeopardy. If there is complete separation or near separation of the placenta, death is inevitable, unless an immediate cesarean section is performed. Fetal mortality rates of 1-40% have been reported, but this also depends on the age of the fetus and the extent of separation. Each year in the US, about 1 to 5% of maternal deaths are linked to placental abruption. Besides the hemorrhage, the other morbidity is related to blood transfusions, the prematurity of the fetus, hysterectomy, and cesarean section (which will make the need for future cesarean sections more likely). Recurrence rates of 3-10% are reported. [2][15] [Level 5] 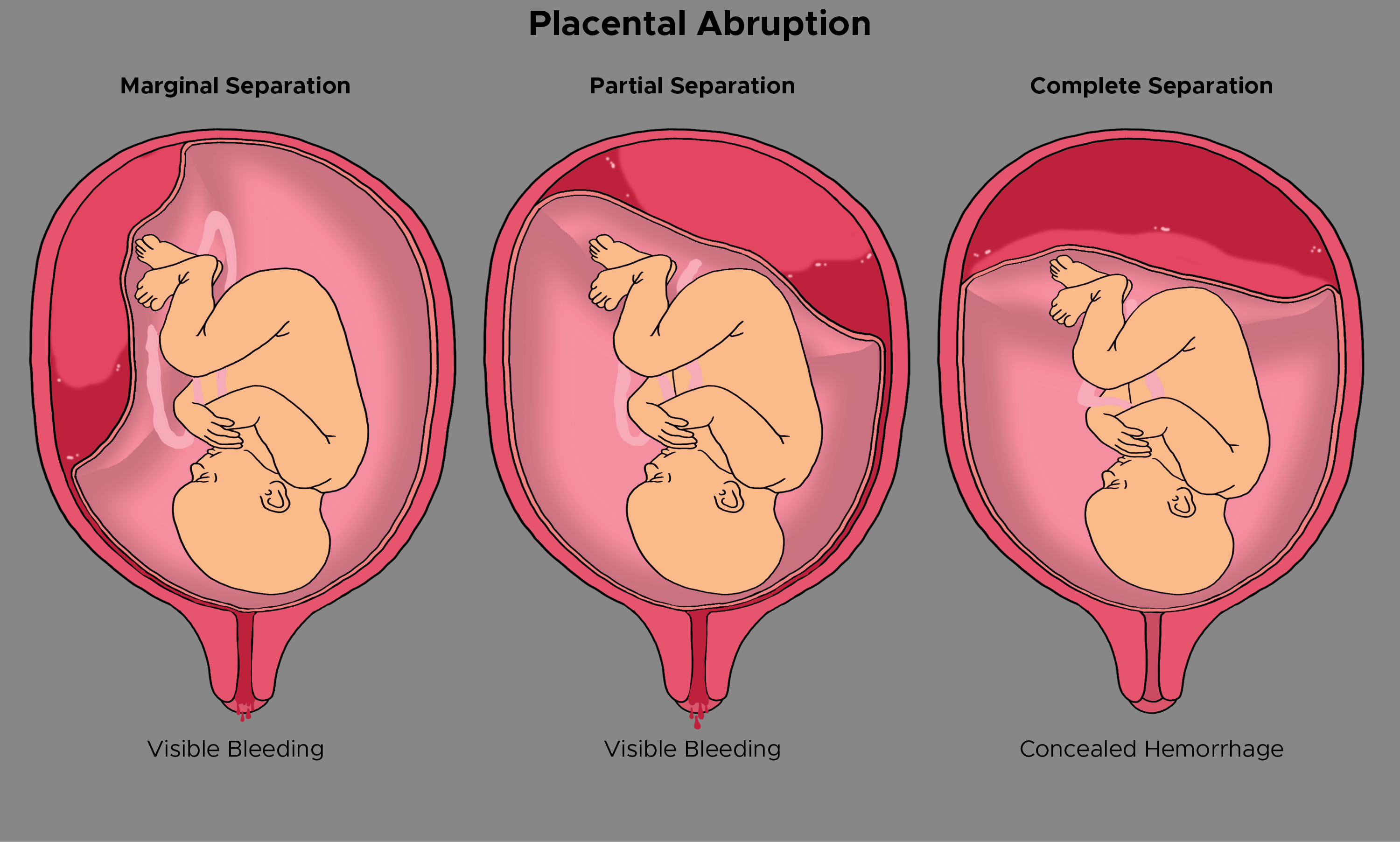 Arlier S,Adiguzel C,Yilmaz ES,Seyfettinoglu S,Helvacioglu C,Ekin GU,Nazik H,Yucel O, The role of mean platelet volume and platelet distribution width in the prediction of placental abruption. Journal of obstetrics and gynaecology : the journal of the Institute of Obstetrics and Gynaecology. 2016 Oct     [PubMed PMID: 27184035]