Harlequin syndrome is a rare dysautonomic syndrome caused by the unilateral blockade of the T2-T3 fibers carrying sudomotor and vasomotor supply to the face. It results in hemifacial discoloration with half of the flushed hyperemic face sharply differentiated in the midline from the other pale half. It can be caused by an injury, compression, or blockade of sympathetic fibers along the pathway. However, almost half of the cases are idiopathic. It has been reported following many surgical and anesthetic procedures. This activity reviews the evaluation and management of Harlequin syndrome and highlights the role of the interprofessional team in evaluating and treating patients with this condition.

Harlequin syndrome is a rare dysautonomic syndrome first reported by lance et al. in 1988.[1] It is characterized by hemifacial discoloration, sharply demarcated at the midline. It is caused by unilateral blockade of sympathetic fibers, which carry the vasodilator and sudomotor nerves to the face. It is primarily idiopathic, triggered by exercise, emotions, spicy food, or heat. However, it can also be a manifestation of underlying cervical and upper thoracic pathologies resulting in the compression of these sympathetic fibers or iatrogenic from the surgical or anesthetic procedures around the neck.

It is a benign self-resolutive syndrome. However, the sudden dramatic, colorful presentation of this condition can bring a lot of distress and anxiety to the patient and families. Familiarisation with this syndrome helps the clinicians identify the condition and appropriately direct patient care.

In more than half of the reported cases of Harlequin syndrome, there is no underlying organic etiology, and the cause is unknown, referred to as idiopathic Harlequin syndrome. There is no genetic association found with Harlequin syndrome. Immaturity, injury, compression, or blockage of the sympathetic fibers to the face may result in the Harlequin sign, representing underlying pathology. Harlequin syndrome is common in neonates, attributed to hypothalamic functional immaturity and vasomotor instability.[1] It is more pronounced following general anesthesia with volatile anesthetics or prostaglandin infusion as they alter the vascular tone.[2]

Compressive retraction injuries or accidental resection of the sympathetic fibers to the face during the neck surgeries may also result in the Harlequin sign.

Harlequin syndrome is common in women. There are few sporadic case reports in the literature indicating its rarity. However, it is a common presentation among healthy newborns, and the incidence has been reported as high as 10%.

It usually occurs from day 2 to day 5 of life and rarely occurs after three weeks. It was previously thought to be more common among premature neonates, but recent studies show a similar incidence among healthy term neonates.[7]

The sympathetic nervous system maintains the peripheral capillary bed tone and thereby controls the facial flushing and sweating of the face. These fibers originate from the hypothalamus. They descend posterolaterally in the brain stem and terminate at the C8-T2 level of the spinal cord. Second-order neurons come out of the spinal cord at the T1 to T3 level. They ascend in the cervical sympathetic chain and synapse with the third-order neuron at the superior cervical ganglia at the C3-C4 level. Two branches come off the superior cervical ganglion. They run along the internal and external carotid artery and carry the sudomotor and cutaneous vasodilator fibers to the face (T2-T3). The oculo-sympathetic fibers to the iris, responsible for the pupillary dilation, originate from the T1 level.

Unilateral injury, compression, or blockade of T2-T3 sympathetic fibers along its pathway from the hypothalamus to the face cuts down the sympathetic supply to the ipsilateral face. It results in hemifacial vasoconstriction and anhidrosis on the affected side, manifesting as the Harlequin facies. The facial discoloration may extend into the upper chest and arms if T4 fibers are involved, and Horner syndrome manifests if T1 fibers are compromised.

Horner syndrome, a triad of pupillary constriction, ptosis, and ipsilateral anhidrosis, may occur with or without the Harlequin sign. The discoloration may be extensive depending on the extension of the sympathetic blockade by the underlying pathology.[8]

The onset of Harlequin syndrome is typically acute, often precipitated by intense emotions, heat, or exercise. The affected side looks pale, anhidrotic, and cold to the touch. There is compensatory flushing, hyperemia, and sweating on the contralateral side. These two sides of the face are sharply demarcated at midline like the Italian theatre character “Harlequin,” as shown below (figure-1).

The typical facial presentation may last just for a few seconds to minutes or sometimes for hours before it normalizes completely. There may be such spells of color change spaced sporadically over time secondary to the trigger. This demarcation may extend into the arms and chest depending on the extension of the fibers blocked. The discoloration can also involve the entire half of the body, especially in neonates with immature hypothalamus.[9]

Patients manifesting as Harlequin face with the underlying disease may have additional features of the primary disease. The hemifacial discoloration in these cases may last longer and may even be permanent, which gets more prominent with the stress. A thorough physical, ocular and neurological examination helps determine the underlying cause.

The acute asymmetrical facial discoloration in the background of a trigger or underlying condition is typical of Harlequin syndrome. Harlequin faces following anesthetic and surgical procedures that are short-lived and self-resolving. Hence investigations are not often necessary.

A stress test can reproduce the symptoms to objectivate the syndrome. Quantitative sudomotor axon reflex testing (QSART) and thermoregulatory sweat test (TST) can be used to access the sudomotor function and integrity of the sympathetic innervation if needed.

Chest X-ray, computed tomography, and magnetic resonance imaging of lung apex, carotid arteries, spinal cord, and brain may be essential to rule out the underlying condition before considering Harlequin syndrome.[8]

Idiopathic Harlequin syndrome is a benign self-limiting condition that typically resolves within minutes to hours when the trigger subsides. Treatment is often not necessary given the auto-resolutive nature of the syndrome. However, sudden dramatic facial discoloration may bring apprehension and anxiety among the patient and caretakers. Reassurance and counseling are the cornerstones of the management of this syndrome.

Harlequin face following regional anesthesia is primarily due to local anesthetic block of the thoracic sympathetic nerves. This usually subsides with the regression of the block over time. Head up position, lowering or stopping the local anesthetic infusion facilitates the regression. However, it signifies blockade of the T2 fibers and should be considered a warning sign of cephalad spread of the block, if not intentional.

Harlequin face resulting from compressive or retraction injury during neck surgeries may last for hours to days before complete resolution. However, injuries resulting in the complete transection of T2-T4 fibers may lead to permanent facial discoloration, which may be socially embarrassing and require treatment. Stellate ganglion block on the contralateral side is performed as a diagnostic and therapeutic procedure to block hyperemia and flushing over the intact side.[11]

Responsive patients might benefit from repetitive stellate ganglion blockade or botulinum toxin injection.[12] Refractory cases can be treated with surgical sympathectomy on the contralateral side.[13] The treatment of underlying conditions is the mainstay of the treatment in the case of the Harlequin sign with an underlying organic lesion.

Harlequin facies in the neonates may look like a nascent hemangioma of infancy or port-wine stain. Horners syndrome, Ross syndrome, and Holmes-Adie syndrome are other dysautonomic disorders resulting from ganglion cell injury, which may have a similar presentation as Harlequin syndrome. They are usually associated with ocular signs.

Harlequin syndrome is usually a benign condition that resolves spontaneously. However, the reoccurrence is common with the stimulus. The underlying disease process is the main determinant in predicting the patient's long-term outlook with Harlequin syndrome.

Extensive underlying lesions can cause some autonomic dysfunction, which needs consideration. There are no long-term complications associated with this syndrome as such.

Anesthesiologists, surgeons working in the neck region, neonatologists, dermatologists, and neurologists often encounter Harlequin syndrome. Familiarity with this rare syndrome helps make the diagnosis and facilitates the management of this syndrome.

Given the idiopathic etiology and rarity of the condition, there are not many measures that could be targeted to prevent this syndrome. However, avoidance of triggers possibly helps to avoid the Harlequin faces. Appropriate counseling before susceptible surgical and anesthetic procedures of the neck helps to minimize apprehension if Harlequin syndrome develops.

Harlequin syndrome is a rare dysautonomic syndrome associated with a sudden dramatic, colorful presentation. There may be diverse underlying pathologies manifesting as harlequin facies that need to be ruled out before considering the definitive diagnosis of primary Harlequin syndrome. This requires collaboration between multiple specialties, including but not limited to surgeons, neurologists, anesthesiologists, neonatologists, dermatologists, radiologists, ophthalmologists, and nursing staff.

Despite the benign nature of Harlequin syndrome, it can bring significant anxiety and apprehension among the patient, caretakers, and healthcare personnel. Familiarity with this syndrome among physicians and nurses is essential for identifying, diagnosing, and managing the syndrome, improving patient satisfaction, and avoiding potentially harmful therapeutic interventions. 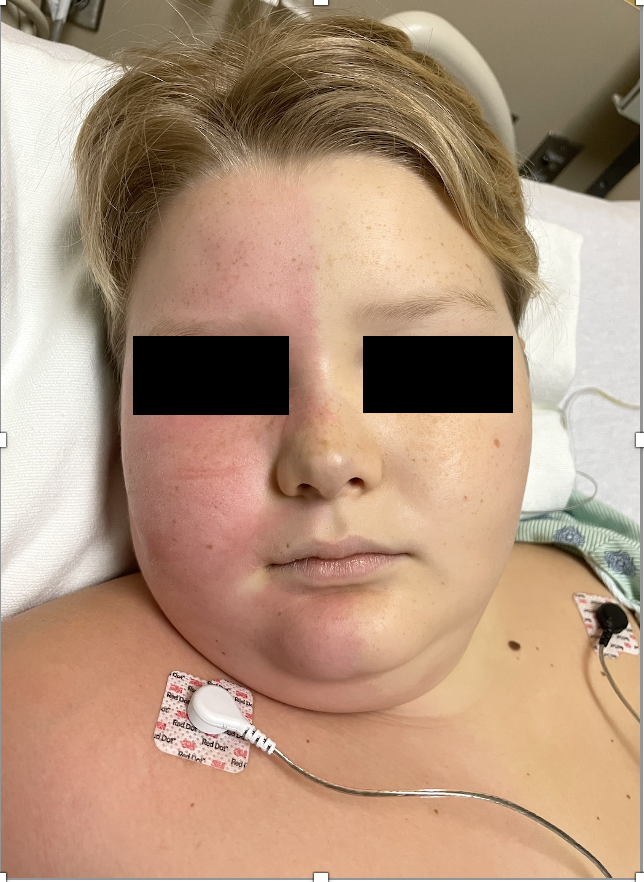