These largely acellular calcifications, usually detected incidentally on an exam, may progress and become more visible during earlier decades of life but rarely change significantly over a patient's lifetime and are generally asymptomatic.[2] Although most are asymptomatic, optic nerve drusen have been associated with visual field defects, anterior ischemic optic neuropathy, transient visual obscurations, and more rare complications.[3]

Superficial drusen can be diagnosed clinically; however, deeper or buried drusen may give the appearance of a swollen disc or edema (i.e., papilledema or bilateral disc swelling secondary to increased intracranial pressure) and require further evaluation and testing to confirm the diagnosis.[4] Despite their different locations, superficial and deep drusen represent the same pathology.[5]

While drusen may give the appearance of disc edema or swelling, or pseudo papilledema, the presence of drusen does not exclude the presence of actual edema. For example, there is a high prevalence of nerve drusen in young patients with idiopathic intracranial hypertension.[6] Although no pattern of inheritance has been fully elucidated, autosomal dominant inherence with incomplete penetrance is the leading suspicion.[7]

The prevalence of optic nerve drusen is estimated to be 3.4 to 24 per 1000, equally affecting males and females and Caucasians more than other ethnicities.[8]

Typically, patients are asymptomatic, and the drusen are noticed incidentally on examination. However, up to 10% of patients may report transient visual obscurations, and up to 25% may present with visual field defects, including enlarged blind spots.

On physical exam, superficial drusen can be seen without the aid of imaging modalities. The nerve is classically described as having a "lumpy, bumpy" appearance. The drusen appear as round, refractile bodies which may be yellow or white in color and located on the surface of or buried under the nerve. Drusen are most commonly located on the nasal aspect of the disc. Additionally, if there is asymmetric nerve involvement, patients may have an afferent pupillary defect. Spontaneous venous pulsations and tortuous or anomalous vessel branching and caliber can be seen.

In some cases, the irregular border of the nerve secondary to drusen may give the appearance of edema, creating diagnostic confusion. Clinically, true edema from pseudo edema can be distinguished based on the appearance of the nerve. Particular attention should be paid to the disc microvasculature as there will often be peripapillary flame hemorrhages and a reddish hue of the disc in cases of true disc edema. Additionally, in true edema, both retinal vessels and vessels at the disc margin may be obscured, while vessels are clearly visible in pseudo edema. In borderline situations and cases of suspected deeper drusen, further investigation is warranted through other imaging modalities to confirm the presence of drusen.[9]

For both superficial and deep drusen, ultrasound may demonstrate a highly echogenic focus at the disc, representing calcification.[10] CT has utility in showing calcified drusen; however, it can not detect noncalcified drusen. Fluorescein angiography was classically utilized to distinguish true disc edema from buried nerve drusen; however, data reveals variability in the effectiveness of fluorescein angiography in detecting optic nerve drusen, especially in borderline cases.[11]

Fundus autofluorescence will demonstrate optic nerve drusen as bright hyperfluorescent foci in the disc, revealing all visible and most buried drusen.[12] OCT will reveal nerve drusen as areas of irregular or spherical hyporeflective cores with a uniform internal structure and hyperreflective borders at the surface.[13]

While ultrasound and OCT provide excellent mechanisms to identify nerve drusen, OCT with enhanced depth imaging provides superior visualization, with one study revealing a 100% detection rate of buried drusen compared to 82% by non-EDI OCT and 41% by ultrasound.[14]

In addition to detecting the presence of nerve drusen, certain imaging modalities can assist the physician in assessing possible complications and effects of the drusen. For example, OCT can help track nerve fiber thinning that can predict visual field loss.[15]

Optic nerve drusen on their own do not necessitate treatment. Typically, patients have a good visual prognosis, and drusen can be re-evaluated periodically. There is no strong evidence for initiating treatment for those individuals without visual field loss, although treatment with IOP lowering therapy or optic nerve sheath fenestration has been undertaken in some cases.  Additionally, there are no established surgical interventions for removing optic nerve drusen. Surgical excision and radial optic neurotomy have been attempted without evidence to back their utilization. On the contrary surgical excision has been shown to have negative consequences.[16]

Complications associated with optic nerve drusen may require treatment. Choroidal neovascularization occurring in association with the presence of nerve drusen, though rare, may lead to complications such as central retinal vein occlusion or ischemic optic neuropathy. These entities are treated with intravitreal injections of anti-VEGF medication, laser photocoagulation, and photodynamic therapy.[17]

A critical differential to rule out is actual disc edema or papilledema (bilateral disc edema). Imaging modalities can help make this distinction. It is also important to remember that real edema can be present in addition to nerve drusen. OCT will reveal NFL thickening in cases of the presence of disc edema.

Pseudopapilledema from other etiologies such as congenital anomalies, infiltrative lesions, vitreopapillary traction, and genetic disease such as Lebers hereditary optic neuropathy are other important differentials to keep in mind. History and the greater clinical picture, in addition to imaging modalities, can assist the physician in distinguishing between these entities.

Typically overall visual morbidity is minimal. Nerve drusen can be followed periodically and do not typically cause visual acuity loss. However, visual field loss is more common, with some estimates stating as many as 50% of children and nearly 90% of adults may have visual field defects, most commonly enlarged blind spots and peripheral constriction, or less commonly arcuate defects. More severe visual morbidity may arise from rare complications associated with nerve drusen, such as ischemic optic neuropathy.[20]

Patients should be educated that they will likely not experience visual symptoms in the presence of nerve drusen. However, they are highly likely to develop some visual field defects detectable on visual field testing. Education should also be given that despite the benign nature of nerve drusen, imaging is warranted in general and especially in borderline cases to confirm no presence of disc edema.

Optic nerve drusen are typically benign findings discovered on routine examinations. While superficial drusen may be diagnosed clinically, buried or deeper nerve drusen may present diagnostic uncertainty and require work up to establish and confirm the diagnosis. Imaging modalities such as ultrasound, fundus autofluorescence, and OCT with enhanced depth imaging represent premier techniques in confirming the diagnosis.

In addition to confirming the diagnosis, it is critical to rule out the concurrent presence of edema. This can be done in part through the same imaging modalities used to diagnose nerve drusen.

Patients must understand that although nerve drusen are usually not vision-threatening, they can cause visual field defects and have been associated with rare, potentially visually devastating complications such as anterior ischemic optic neuropathy and retinal vascular occlusions.

It is important to refer patients suspected of having nerve drusen to an ophthalmologist for further evaluation and testing to confirm the diagnosis, the patient appropriately followed, disc edema ruled out, and complications managed should they arise. Due to the complexity of diagnosis and potentially devastating consequences of disc edema, consultation with ophthalmology should be done promptly by the healthcare professional in cases of suspected optic nerve drusen. 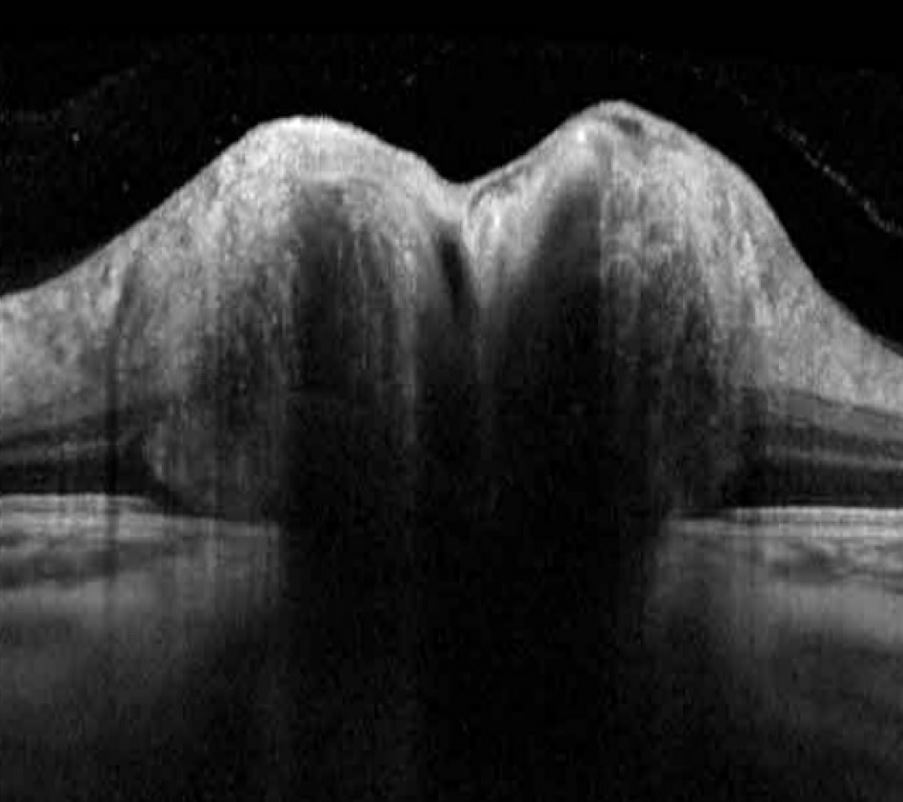 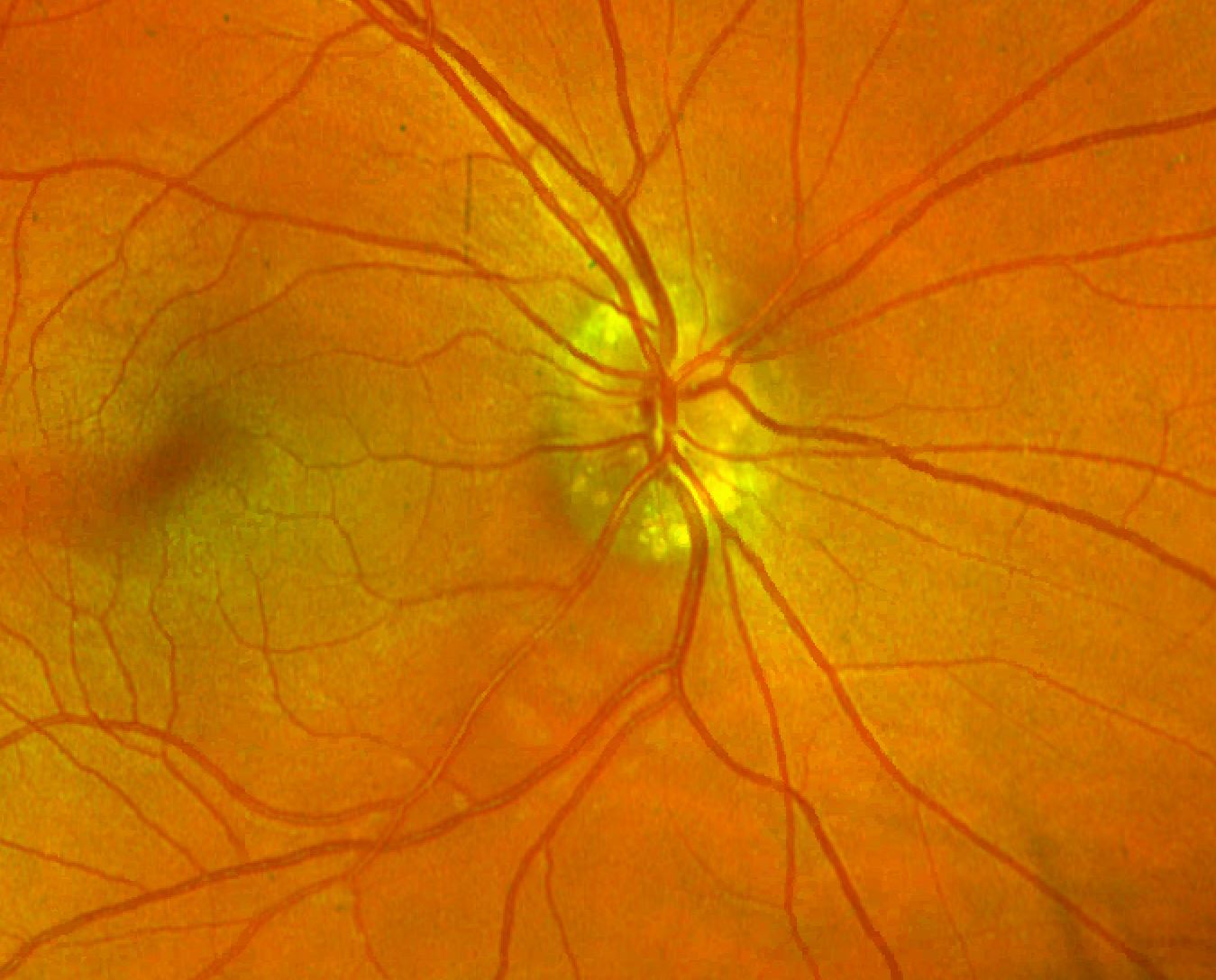 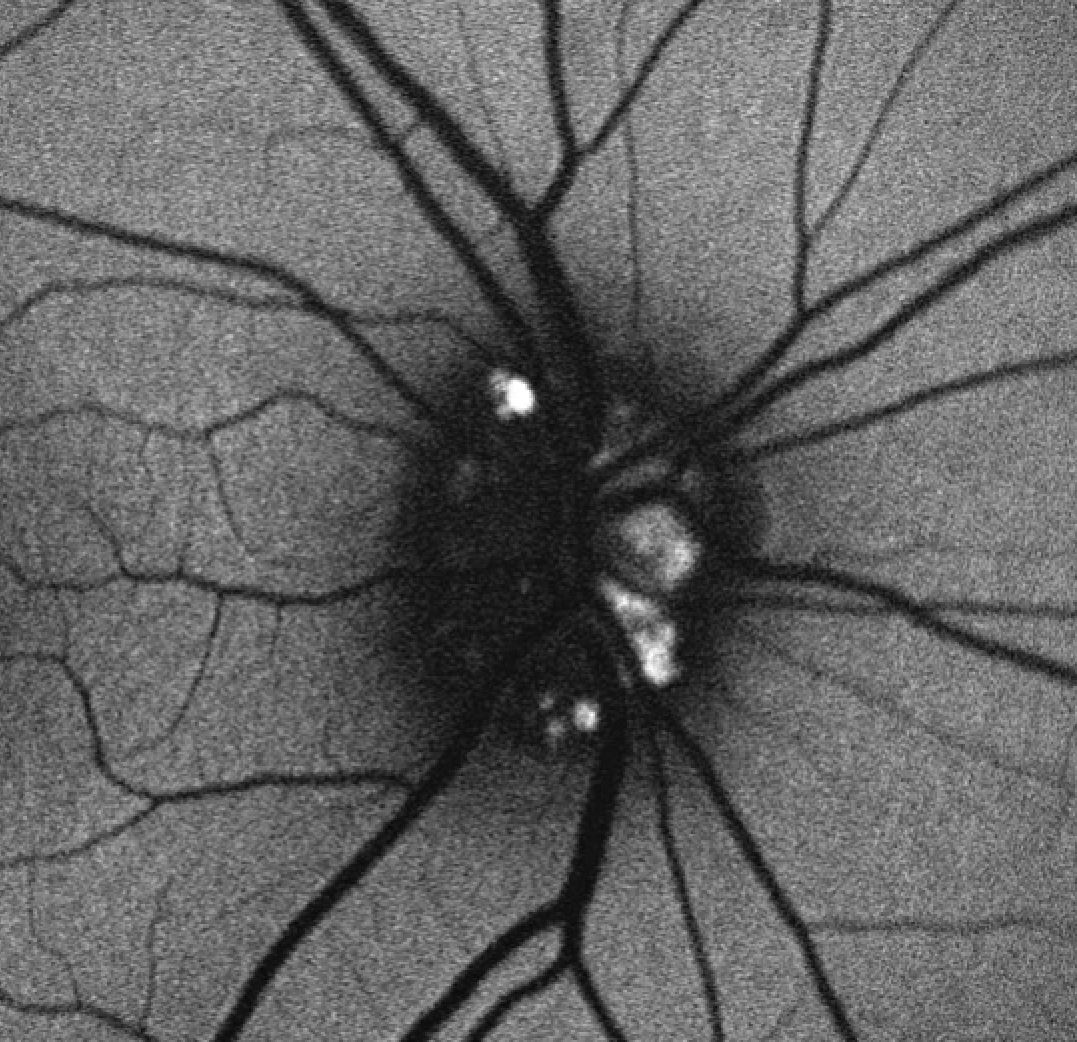