Pseudoexfoliation syndrome is a chronic, age-related disorder of the extracellular matrix that results in the deposition of abnormal fibrillary (pseudoexfoliative) material within various body tissues. However, this condition manifests primarily in the anterior segment of the eye. This activity reviews the evaluation and treatment of pseudoexfoliation syndrome and highlights the role of the interprofessional team in evaluating and treating patients with this condition.

Pseudoexfoliation syndrome (PEX) is a systemic disorder of the extracellular matrix that presents primarily via its characteristic ocular manifestations. It is clinically diagnosed through slit-lamp visualization of white, flaky fibrillar (pseudoexfoliative) material on the pupillary margin of the iris and the anterior lens capsule.[1]

PEX may be present unilaterally or bilaterally. PEX is strongly associated with raised intraocular pressures (IOP) in up to 44% of patients and subsequent development of pseudoexfoliation glaucoma (PEG), making it the most common identifiable cause of secondary open-angle glaucoma.[2] PEX is also associated with technically challenging cataract surgery: PEX eyes dilate poorly and have unstable lens zonules, which may lead to a higher risk of complications such as capsular bag rupture, zonular dialysis, and loss of vitreous.[3]

The exact etiology of PEX is not known; however, association with human leukocyte antigen supports that there is a genetic component to this disease:

Other genetic associations have also been discovered, including polymorphisms of the CNTNAP2 gene, tumor necrosis factor-alpha, matrix metalloproteinase-1, and 3. Environmental factors that have been proposed to play a role in the development of PEX include exposure to UV light, viral infection, and trauma or surgery involving the anterior segment.[4]

The prevalence of PEX increases markedly with age. It is estimated that up to 20% of the over-60 population may be affected.[1] Studies reporting on association with gender have produced conflicting results, and so the link remains unclear.[6] PEX is found in all geographic populations with a significant variation in prevalence. Nordic and Eastern Mediterranean countries are most affected, and East Asian and Inuit populations have the lowest reported prevalence.

PEX material is most readily found in the structures of the eye bathed by the aqueous. Still, it has also been isolated from various other body tissues: blood vessels, lungs, heart, liver, kidneys, and skin.

The exact pathophysiological processes that underline PEX remain unclear. Still, it is now well known that PEX is a fibrillopathy: PEX material arises from abnormal accumulation of elastic microfibrils composed of fibrillin-1, fibulin-2, vitronectin, the enzyme lysyl oxidase, and clusterin, amongst other proteins. Fibrillin molecules aggregate to form microfibrils which are then crosslinked to form PEX fibrils.

Transforming growth factor-beta 1 (TGF-B1) is considered a key mediator of abnormal accumulation of PEX material. It has been shown to promote PEX material formation in vitro and, increased concentrations have been found in the aqueous humor of PEX eyes. There is evidence that oxidative stress plays a role in developing PEX: decreased levels of ascorbic acid and increased levels of oxidative stress markers have been found in aqueous humor. Iris hypoperfusion and anterior chamber hypoxia are also associated with PEX.

The vasoconstrictor endothelin-1 is found in increased concentrations in PEX, and nitric oxide (a vasodilator) is reduced. It has been suggested that this may further exacerbate cellular stress and lead to the processes behind the development of PEX. Accumulation of abnormal PEX fibrils may be promoted via a deficiency of clusterin, a molecular chaperone that inhibits aggregation of misfolded proteins. Finally, dysfunction of matrix metalloproteinases (MMPs) prevents the breakdown and clearance of this abnormal material.[1]

Light microscopy of anterior segment structures demonstrates deposition of PEX material on iris pigment epithelium, anterior lens capsule, and corneal endothelium. Electron microscopy and immunohistochemical studies have demonstrated the production of PEX material by the non-pigmented epithelial cells of the ciliary body, iris pigment epithelium, pre-equatorial lens epithelium, and corneal endothelium. PEX material seen on the anterior lens capsule and the zonular fibers is thought to be transmitted from the cellular tissues via the aqueous.

Zonular weakness is a characteristic feature of PEX, and loosening of the zonular attachments to the basement membrane of the ciliary body is considered to be primarily responsible for this. This is aggravated by further weakness along the free zonular fibers and their attachment to the basement membrane of the lens capsule. Electron microscopies of conjunctival biopsies taken from fellow eyes in unilateral cases demonstrate the presence of subclinical pseudoexfoliative material, confirming that PEX is a bilateral condition with marked clinical asymmetry.[7][8][9]

Patients are often asymptomatic but may present with peripheral visual field loss from secondary glaucoma. The diagnosis is made clinically via characteristic slit-lamp biomicroscopy and gonioscopic findings:

The characteristic finding in PEX is the visualization of white, flaky, dandruff-like PEX material along the pupillary margin and anterior lens capsule. The anterior lens capsule shows a central disc and peripheral ring of PEX material with a clear intermediate zone maintained by pupillary abrasion. The central disc may be absent in up to 20% of cases, and the peripheral zone may not be completely visualized without the aid of pharmacological dilation. There may be phacodonesis secondary to zonular weakness.

A thorough, systematic examination may reveal additional signs. The corneal endothelium may show deposition of PEX material that may be erroneously interpreted as keratic precipitates. Fine scattered pigment deposits are also present, which may form a vertical line known as a Krukenberg spindle, similar to what may be seen in pigment dispersion syndrome. The aqueous humor may demonstrate PEX particles and mild flare from an impaired blood-aqueous barrier. The iris may demonstrate poor mydriasis secondary to atrophy of the dilator muscle and loss of elasticity due to PEX material accumulation within the iris stroma. There may be loss of pupillary ruff due to rubbing against the lens, and transillumination defects may be seen along the pupillary margin. This is in contrast to the more mid-peripheral iris transillumination seen in pigment dispersion syndrome. There is an increased incidence of nuclear sclerotic and subcapsular cataracts in PEX eyes compared to non-PEX eyes, although the pathophysiology is not yet understood.

All patients suspected of PEX must undergo a dilated slit-lamp examination and gonioscopy. Baseline IOP must be measured at the time of diagnosis and after that at least annually due to the high risk of developing ocular hypertension and pseudoexfoliation glaucoma (PEG). Genetic testing of eyes is not routinely performed as PEX is a clinical diagnosis.

Evaluation of patients suspected of PEG is identical to those suspected of primary open-angle glaucoma (POAG) and covered in detail elsewhere.[10]

To summarise, this involves:

There is currently no treatment available to halt the deposition of PEX material in affected eyes. Management of this condition is primarily aimed at regular (at least annual) eye examinations for early detection and treatment of glaucoma.

The first-line treatment of PEG is medical. IOP lowering topical medications that are effective in PEG include prostaglandin analogs, beta-blockers, carbonic anhydrase inhibitors, or a combination of these. Pilocarpine is not recommended due to the risk of worsening angle-closure glaucoma and posterior synechiae formation. PEG is generally more resistant to medical therapy than POAG.

Selective laser trabeculoplasty (SLT) may be used as a first-line treatment or to avoid more invasive surgery. It is very successful in PEG eyes, reducing IOP by 30%. The increased effectiveness of SLT may be due to the increased pigmentation of the trabecular meshwork, which leads to increased absorption of laser energy. SLT, however, is not permanent, and a significant proportion of patients may require further surgery in the long term.

Surgical management of PEG may be considered following the failure of maximal medical therapy or SLT. Trabeculectomy in PEG patients has shown similar outcomes as with POAG patients, without an increased risk of complications. Glaucoma drainage devices may also be considered. If there is a component of angle-closure secondary to cataract or anterior lens movement secondary to zonular laxity, laser iridoplasty or cataract extraction may be beneficial.

PEX is significantly associated with the development of glaucoma. In one study, 44% of patients diagnosed with PEX developed ocular hypertension requiring treatment or glaucoma within 15 years of follow-up. In patients diagnosed with unilateral PEX, the risk of fellow eye developing clinically evident PEX was 29% by 15 years.[2] When compared to POAG, PEX eyes have higher IOPs with an increased diurnal variation. There is a rapid progression of nerve damage, and subsequent field loss may be worse than POAG.

PEX eyes may be complicated by progression to ocular hypertension or glaucoma. Other significant ocular complications related to those associated with and following cataract surgery, as detailed above.

Patients should be advised to seek annual eye screening to develop ocular hypertension and/or glaucoma. Patients on medical therapy must be advised on the importance of treatment adherence in preventing the progression of glaucomatous damage. Those undergoing cataract surgery must be counseled regarding the increased risks associated with surgery and the possible need for further surgery if there are associated complications. They should be advised of the risk of IOL decentration years following the surgery. PEX is significantly associated with cardiovascular and cerebrovascular disease, and patients may be advised to seek optimization of vascular risk factors with their primary care physician.[16]

Untreated glaucoma may lead to severe peripheral visual loss, followed by central visual loss. Patient outcomes can be improved through ophthalmologist collaboration with other healthcare professionals within the community setting. Community optometrists are well-equipped to perform routine eye examinations, monitor patients’ intraocular pressures, and perform perimetry testing. They are aiming to refer all glaucoma suspects to secondary care. In patients diagnosed with glaucoma, they may monitor response to treatment and provide ongoing patient education. The primary care physician can work with patients to treat co-morbidities that may impair self-administration of eye drops such as arthritis of the hands and optimize vascular risk factors that may be elevated in this patient group. [Level 5] 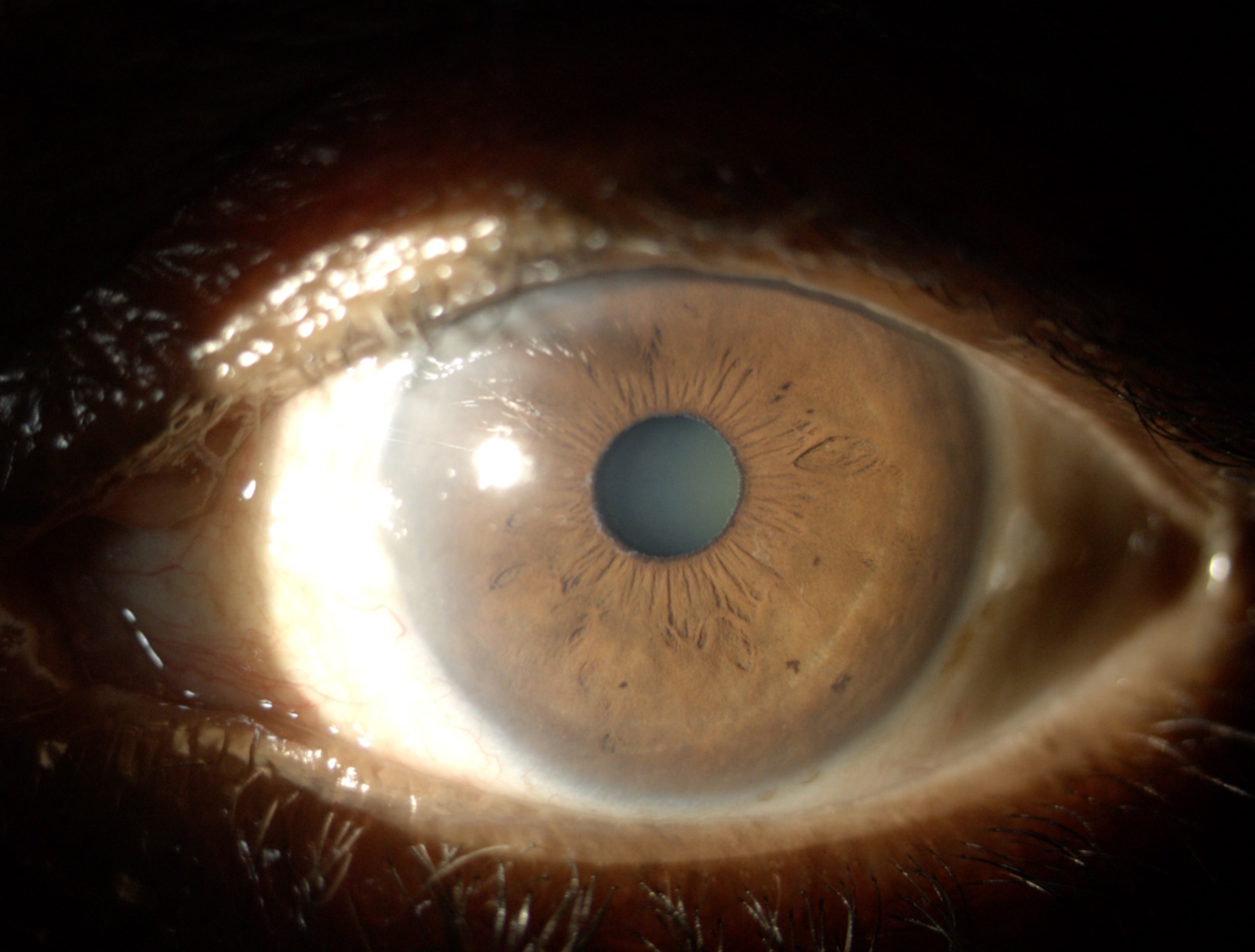