Iron is essential for multiple biological functions of the body. It is necessary for the synthesis of hemoglobin, myoglobin, cell regulation/proliferation, DNA synthesis, and electron transport in the mitochondria.[1]

Nearly two-thirds of the body iron is found in the circulating RBCs as part of hemoglobin, with remaining iron present in the storage form(bone marrow, liver, etc.) myoglobin and many enzymes involved in various physiological functions.[2]

Iron deficiency can be absolute or functional. Women of reproductive age and children between ages 0 to 5 are particularly at risk.

As there are no well established diagnostic criteria for iron deficiency without anemia and symptoms are vague, it can easily be missed. Clinicians should suspect a chronic iron deficiency in patients with normal complete blood counts who present with symptoms similar to anemia symptoms and have low ferritin. These patients need to be investigated for evidence of iron deficiency and inquired about blood loss in medical history.

As the majority of the body's iron is present in RBCs, bleeding from any site can cause iron deficiency. It is the most common cause of iron deficiency in developed countries. Overt causes of bleeding like hematemesis, menorrhagia, multiple pregnancies, and childbirth, etc. can easily be recognized based on history alone. Other causes like occult gastrointestinal (GI) bleeding, parasitic infections like hookworm, and frequent blood donations can be easily overlooked. Frequent blood donation is an important cause of iron deficiency, especially in women.[4]

Inadequate dietary intake is rare in developed nations. There are two forms of dietary iron; heme iron, which is present in animal sources, is more readily absorbed by the body than non-heme iron from plant-based foods. People from poor socio-economic backgrounds, vegetarians/vegans, and elderly who do not eat a balanced diet are prone to developing iron deficiency. In toddlers, excessive milk or juice intake, prolonged bottle-feeding, and snacking contributes to iron deficiency.[5]

According to WHO’s Global Burden of Disease Project 2000 (GBD 2000), iron deficiency is responsible for 841,000 deaths worldwide with the major burden of mortality seen in Africa and parts of Asia.[7]

In the US, iron deficiency is seen in 9% of toddlers between ages 1 and 2 years. Compared to white toddlers, Hispanic toddlers are twice as likely to have an iron deficiency. The prevalence in adolescent girls and women in the reproductive age group is between 9% to 11%. It is most common in multiparous women from low-income minority populations. In males, it is seen in around 1% of the population with a slightly higher prevalence of 2% to 4% in middle-aged and older men.[8][5]

There is a positive correlation between obesity and the risk of developing iron deficiency.[9]

The maintenance of iron homeostasis occurs via a balance of absorption and iron losses. Absorption in the small intestine is the primary regulating factor of iron content in the body. Iron is absorbed in divalent form by enterocytes via the divalent metal transporter (DMT1). Once absorbed, it is sequestered in ferritin if body stores are adequate. If iron levels are low, iron is bound to transferrin by ferroportin. Once loaded on to transferrin, iron is transported to cells for metabolism. Hepcidin is a peptide that inhibits ferroportin and decreases the absorption of iron into circulation.[10]

Iron enters cells after transferrin binds to the transferrin receptor (TfR). Iron levels are further controlled by iron-regulatory proteins 1 and 2(IRP1 and IRP2), which optimize cellular iron availability by upregulating the expression of multiple genes.[11]

The majority of symptoms are nonspecific, which can include but not limited to generalized weakness, fatigue, poor concentration, irritability, headaches, shortness of breath on exertion, and decreased exercise capacity. These are attributable to low oxygen delivery to tissues and reduced activity of iron-containing enzymes.

Pica occurs in approximately half of these patients, and pagophagia (craving for ice) is quite specific for iron deficiency.[13] Patients may have a history of dry mouth, hair loss, dysphagia, brittle fingernails, and restless leg syndrome.

Beeturia is a finding which is not specific for iron deficiency but is more common in these individuals. It is the result of a change in gastrointestinal function due to severe iron deficiency. The urine turns red following the ingestion of beets.[14]

The diagnosis of iron deficiency is based mainly on history, examination, and laboratory tests. In uncomplicated cases, serum iron, transferrin, ferritin, TIBC, and TSAT should be used for evaluation. Serum iron varies during the day and is influenced by diet. A fasting sample should be obtained in the morning.[12] Absolute iron deficiency is diagnosed when serum ferritin is less than 30 ng/mL.[16]

TSAT is calculated as the ratio of serum iron to TIBC. It is one of the earliest biomarkers of iron deficiency and is useful when serum ferritin is unequivocal. A decrease (less than 20%) indicates an iron deficiency, either absolute or functional.[15][3]

Other iron studies available for the evaluation of iron deficiency are:

Patients with uncomplicated iron deficiency without comorbidities should receive treatment with oral iron therapy. Oral iron is readily available, inexpensive, effective, safe, and convenient. Some of the available formulations include ferrous sulfate, ferrous fumarate, and ferrous gluconate. High molecular weight dextran has been withdrawn due to a high frequency of serious anaphylactic reactions.[10]

Gastrointestinal (GI) side effects occur in up to 70% of the patients taking oral iron, leading to noncompliance with treatment. GI symptoms can be minimized by the use of chelated forms of iron. Enteric-coated tablets lead to poor absorption and are not viable options.[16][17][19]

There is a low risk of allergic reactions with all IV iron formulations. Premedication with antihistamines does not prevent infusion reactions and should not be given. Patients with a history of asthma or drug allergies should receive steroids before infusion.

In pregnancy, oral iron is given as a supplement during the first trimester as the safety of IV iron in the first trimester remains unestablished. Generally, oral iron is given to pregnant women if they can tolerate it. Exceptions include women with severe anemia, women with Inflammatory Bowel Disease, and those who have undergone bariatric surgery. In these patients, IV iron is preferable. All IV forms have equal efficacy and safety except for some formulations of ferric gluconate, which utilize benzyl alcohol as a preservative and should be avoided because of the possibility of harm to the fetus.

The differential diagnoses for iron deficiency without anemia are broad as the majority of the symptoms are non-specific and seen in many other conditions. These can include causes of fatigue e.g., fibromyalgia, chronic fatigue syndrome, depression/mood disorders, chronic medical conditions, and hypothyroidism, etc. Differential diagnoses also include other causes of pica e.g., eating disorders, psychiatric conditions, malnutrition, and causes of restless legs syndrome-like neurological conditions and pregnancy.

Iron deficiency is an easily treatable condition with excellent prognosis in uncomplicated cases with no comorbidities.

If untreated, it is associated with significant morbidity and mortality, especially in older adults and those with underlying chronic medical conditions, e.g., heart failure, CKD.[1]

If untreated, iron deficiency is associated with significant cognitive impairment and poor quality of life.

In patients with heart failure, chronic iron deficiency shows an association with an increase in mortality.

In babies born to iron deficient mothers, delayed umbilical cord clamping can be helpful in preventing iron deficiency in neonates.[20]

In infants, iron should be supplemented by iron-fortified cereal and formula after six months of breastfeeding. Anti helminthic drugs should be given to children with parasitic infections. In areas where the prevalence of iron deficiency is high, women of the reproductive age group should take daily iron supplements.[10][2]

Iron deficiency is a preventable condition. Screening can identify iron deficiency at an early stage and improve outcomes. It is reasonable to perform annual screening with CBC and iron studies in populations at high risk e.g., women with menorrhagia, low iron intake, or a history of iron deficiency. In general, women in the reproductive age group can be screened every five years with hemoglobin or hematocrit. It may be reasonable to screen men and postmenopausal women once or more frequently if any risk factors are present.

A primary care provider should always be involved in the care of the patient. It is important to consult a hematologist, OB/GYN, or a gastroenterologist as necessary. A dietician can play an essential role in the primary prevention of iron deficiency through diet adjustment. Laboratory technologists have a vital role to play in diagnosing chronic iron deficiency. Pharmacists can help decide the appropriate oral or intravenous iron formulations that best fit the patient's requirements. Nurses not only educate the patients but assist in administering treatment. Effective collaboration and communication between healthcare professionals can ensure optimal outcomes in all patients. [Level 5] 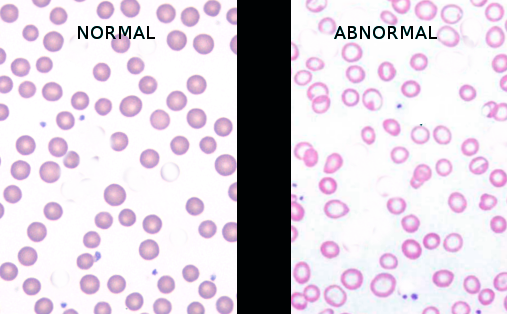