A pulmonary contusion is an injury to the lung parenchyma in the absence of laceration to lung tissue or any vascular structures. It usually results from blunt chest trauma, shock waves associated with penetrating chest injury, or explosion injuries. These injuries can lead to pulmonary failure and death. The pathophysiology of pulmonary contusions remains poorly understood. They were first described by Morgagni, an Italian anatomist in 1761, and the term pulmonary contusion was coined in the 19th century by French military surgeon, Dupuytren.[1][2]

Widespread use of explosives at the time of World War 1 and 2, lead to increased recognization of pulmonary contusion due to blast injuries. Many soldiers with blast injuries developed pulmonary bleeding without apparent external injuries.[3]

Any chest trauma, blunt, penetrating, or a combination of both can lead to a pulmonary contusion. Explosions, falls from great heights, and sports injuries are other identified causes.[4]

A pulmonary contusion is the most commonly identified lung injury  (30% to 75%) in blunt chest traumas with a mortality rate of 10-25%.[5] Children have more flexible chest bones, resulting in large forces transmitted to the lung tissue and significantly more severe contusions without any obvious external injuries after blunt chest trauma.[3][6]

A pulmonary contusion causes injury to lung parenchymal, leading to disruption of alveoli and capillaries, resulting in leakage of blood and other interstitial fluids (water and serum) across the alveolar-capillary membrane into lung tissue and alveolar space. Fluid in the alveolar space leads to alveolar edema and a decrease in the amount of surfactant, leading to alveolar collapse and atelectasis. Decreased lung compliance, ventilation-perfusion mismatch, and intra-pulmonary shunting ensue as a result of the contusion.[7] Ventilation of the affected lung part is impaired as oxygenated air can not enter into fluid-filled alveoli during inspiration leading to reflex vasoconstriction and decreased perfusion, resulting in hypoxemia and hypercapnia.[8][9]

Concurrent aspiration of gastric acid can complicate a pulmonary contusion by worsening of permeability of lung injury and increased inflammatory response and progress to ARDS and pneumonia.[12]

Pulmonary hemorrhage may be associated with pulmonary contusion. Alveolar or interstitial fluid accumulation was found on biopsy in soldiers during world war 2, which was initially attributed to fluid resuscitation. In recent years animal models of disease have identified interstitial hemorrhage followed by edema and inflammatory cell infiltration.[13]

Based on the severity of pulmonary contusion and other concurrent injuries, the clinical presentation may vary. It may present with difficulty breathing and coughing, whereas mild cases may be asymptomatic. The affected area of the chest may be tender. Breath sounds may be decreased on auscultation. In severe cases, hemoptysis may be the presenting symptom. In severe cases, alveolar gas exchange is disrupted, resulting in hypoxemia and hypercarbia, which leads to tachypnea and dyspnea.[14]

In severe contusion, symptoms appear within hours, whereas in mild injury, symptoms may develop gradually over 24-48 hrs.[9]

A detailed history of the injury, thorough physical examination, and imaging can aid in the diagnosis of pulmonary contusion.

The imaging techniques include radiography of the chest, computer tomography (CT) scans, and ultrasound.

A chest X-ray is the most commonly used imaging technique for diagnosis. Its interpretation may be difficult as lung anatomical boundaries do not limit pulmonary contusions.[5][15][5] Further contusions may be obscured by the presence of a pneumothorax or a hemothorax.[5] Contusion findings may not appear on chest X-ray immediately after injury with an average delay of 6 hours and sometimes may not be apparent until 48 hours post-injury.[5][15] In suspected pulmonary contusion, chest X-ray should be repeated after 12 hours of injury as radiographic findings lag behind the clinical presentation and can be missed on initial images done in the immediate post-trauma period.[6] A mild contusion shows up as ground glass haziness on a chest x-ray, and severe disease may present as widespread consolidation masquerading as pneumonia.[16] They are restricted to a geographic area on the chest x-ray and can cross fissures in contrast to consolidations.

An ultrasound is an important bedside imaging tool, readily available for the evaluation of trauma patients in the supine position in the emergency department for diagnosis of pulmonary contusion and pneumothorax.

Most pulmonary contusions require supportive therapy until the contusion heals. Because contusions can gradually evolve over the first 24-48 hours after trauma, close monitoring is required. The goal of therapy is to prevent respiratory insufficiency, failure, and complications.[3] There should be appropriate pain control to prevent splinting of chest muscles secondary to injury and to allow for lung expansion.

Supportive care like postural drainage, suctioning, chest physiotherapy, incentive spirometry, encouraging coughing, and deep breathing can be tried to prevent atelectasis. Positive pressure ventilation using CPAP and BiPAP may be used.[5] It is of utmost importance to provide minimum positive end-expiratory pressure (PEEP) to maintain the lungs open, recruit maximum alveoli, and prevent barotrauma.[6] Prone positioning of the patient with contusion reduces pressure on the diaphragm, and positioning of the contused lung in a non-dependent position helps in recruiting alveoli. Noninvasive ventilation can cause gastric distention and aspiration, especially if the level of consciousness is impaired. If positive pressure ventilation fails, invasive ventilation is required. Large tidal volume can have adverse effects; hence the use of low tidal volume is suggested. Patients with severe hypoxia and with poor response to other therapies can benefit from nitric oxide. Diuretics can be used in a contusion to reduce pulmonary venous resistance and pulmonary capillary hydrostatic pressure.[5] If fluid therapy is required to maintain euvolemia, measuring pulmonary artery pressure is recommended to avoid pulmonary edema.

Surgical stabilization may be required in the case of multiple rib fractures/ flail chest to correct pulmonary mechanics. Cases refractory to all conventional therapies have been successfully managed by extracorporeal gas exchange (ECMO).

Many conditions, like pneumonia, hemothorax, pulmonary edema, may have a similar presentation clinically and on imaging as a pulmonary condition. Trauma patients receiving blood products can develop hypoxia and pulmonary edema due to transfusion-associated lung injury (TRALI) and mimic contusions.

Most pulmonary contusions heal with supportive care within 5 to 7 days. The Murray score for Acute lung injury can be used to assess the severity of lung injury. It includes four parameters: hypoxemia score (PaO2/FiO2), atelectasis, lung compliance, and PEEP score. Each parameter is scored from 0 to 4. The score is calculated, adding the examined parameters and dividing by the number of examined parameters: Score of 0: no lung injury, score of 0.1 to 2.5, mild or average lung injury, score above 2.5,  lung injury with ARDS.[19]. Severe contusion may develop into chronic pulmonary disease. A few years later, functional residual capacity may be decreased, and pulmonary fibrosis can develop.[15]

The use of seat belts, airbags in the vehicles, and age-appropriate car seats offer protection in motor vehicle accidents (MVA) and minimize the risk of pulmonary contusions.[5]

Patients at high risk of a pulmonary contusion are those with motor vehicle accidents with sudden deceleration or a fast-moving vehicle hitting a stationary object. Soldiers exposed to blasts are also at high risk of developing pulmonary contusion that can cause significant respiratory compromise. These patients should be identified quickly, and appropriate imaging should be done, quantify the severity of injury to the pulmonary parenchyma. This would help in the prognosis and identification of those patients at risk of significant clinical decompensation.

The pathophysiology of pulmonary contusions remains poorly understood. The condition can lead to severe life-threatening complications if a high index of suspicion for this diagnosis and its treatment is not provided. A better understanding of this clinical entity by the physicians who treat trauma victims is critical to be able to deliver optimal care for these patients. Timely identification of patients at risk of this injury is crucial to managing them in a timely and appropriate manner. 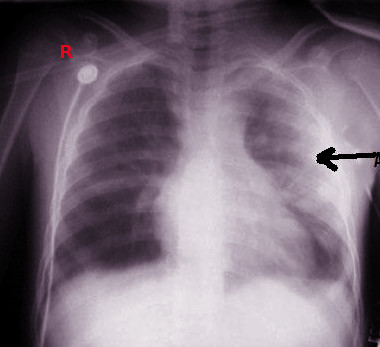