The frontalis muscle plays a significant role in our day-to-day social interactions. As the only muscle that raises the eyebrows, its function goes beyond simply keeping the brows out of one’s visual field; it is also necessary for conveying emotions and nonverbal communication. The antagonist muscles to the frontalis muscle are the procerus muscle, the corrugator supercilii muscle, and the orbicularis oculi muscle. (Fig 1) The frontalis, corrugator, procerus, and orbicularis muscles all have cutaneous insertions and have a confluence at the glabella, and the orbital rim, where their respective movements and forces extended to the skin may cause cutaneous rhytids (frown lines, smile lines, forehead lines, horizontal nasal lines). The balance between these muscles determines the eyebrow position and shape.

The frontalis muscle is on the front of the head, and while it may seem to behave as an independent muscle, it is actually part of a larger structure referred to as the occipitofrontalis muscle or epicranius.[1] A helpful tool for remembering the layers of the scalp is the acronym SCALP:

The superficial musculoaponeurotic system (SMAS) continues above the zygomatic arch and includes the temporoparietal fascia (as it blends into the galea) and the frontalis muscle as part of the SMAS.

Like the other muscles involved in facial expression, the frontalis muscle originates from the second pharyngeal arch, which forms between the third and eighth weeks of development.[3]

The lymphatic drainage of the forehead is complicated and not well understood. Studies looking at the drainage have found that the more lateral portion of the forehead most likely drains differently than the medial portion.[6] Regardless, it appears the forehead drains mainly into the preauricular nodes and parotid nodes.[6][7]

The main venous drainage occurs between three veins: the supratrochlear vein being most medial, then the intermediate supraorbital vein, and finally, the lateral frontal vein. The three further connect through a transverse vein that runs superior to the orbit, appropriately named the transverse supraorbital vein [8]. The transverse supraorbital vein connects medially to the angular vein, which eventually drains into the ophthalmic vein and cavernous sinus. It is important to remember this relationship when considering the risk of external facial infections leading to potentially harmful intracranial infections or cavernous sinus thrombosis.

The supratrochlear and supraorbital nerves that run along their respective arteries, penetrate through the frontalis in order to reach the superficial skin. These are branches of the ophthalmic division of the trigeminal nerve and do not directly innervate the muscle, but instead innervate the overlying skin. The medial branches of the supraorbital nerve are superficial and the lateral branches are deep.

The frontalis muscle is made up of vertical striations in a fan-like distribution. Clinically, the muscle is sometimes divided into medial, intermediate and lateral fibers, although no anatomical or histological distinctions exist. It originates posteriorly from the galea aponeurotica, which corresponds with the hairline on the surface. Inferomedially, the muscle interdigitates with fibers of procerus muscle, while more inferolaterally, it has attachments to the orbicularis oculi and corrugator muscles. Generally, the frontalis inserts at the eyebrow dermis and terminates laterally at the temporal ridge, but there is some variance and occasionally may terminate more medially as well.[10][11] While overall, it is a thin muscle with high vascularity, the bulk of it is located right above the brow. It is thinnest laterally, which represents an area of weakness and the first area to sag as we age.

An understanding of frontalis anatomy is essential for reconstructive and cosmetic procedures. In cases where children are born with an absent or dysfunctional levator palpebrae superioris, such as in bilateral congenital ptosis, the ptosis can be so substantial that it leads to vision obstruction and amblyopia. In those patients, frontalis-orbicularis muscle advancement is possible. This procedure, first described over 100 years ago, now involves making an incision at the crease of the upper eyelid, followed by vertical incisions into the frontalis muscle. Finally, the muscle flap is advanced inferiorly to form a connection with the orbicularis oculi muscle.[14] Another option for ptosis correction utilizing the frontalis is referred to as a frontalis sling or frontalis suspension. This procedure is often favored over a muscle flap advancement and involves a similar approach, except that it uses a suture to connect the frontalis to the tarsal plate.[15] Similar to the flap, this offers the necessary pull to elevate the eyelid with frontalis contraction. Ptosis can be secondary to mechanical, neurological, traumatic, and muscular dysfunctions, for all of which surgery can be the potential last line of defense.[16]

The forehead is a site that many people seek to rejuvenate to maintain a youthful appearance. Relaxed skin tension lines, also called wrinkles, form perpendicular to the underlying muscles and as we age. A trial of nonsurgical options is often the first step to try and alleviate lines, vascular changes, and skin pigment changes. Nonsurgical options can include creams, peels, abrasives, and lasers.[17]

Use of botulinum toxin for forehead and frown lines:

The importance of anatomy plays a role when dealing with minimally invasive procedures like botulinum injections. Botulinum toxin is an effective tool for treating rhytides and wrinkles and can be injected directly into the frontalis muscle. The decreased muscular contraction leads to a decrease in rhytid production and a more youthful appearance. This procedure involves multiple injections into the frontalis. The aim is to avoid complete paralysis of the frontalis muscle: 10 to 20 units of botox distributed across the forehead yields satisfactory relaxation of the horizontal rhytids. When injecting the frontalis, the corrugator and procerus muscles should also be injected. A safe zone for frontalis muscle injections is 2 cm above the brow. If done improperly, the toxin can spread to the levator palpebrae superioris and lead to nonpermanent ptosis. Also, it is important to maintain the balance between the depressors of the brow and the levators. A weak frontalis muscle and dominant set of depressors would cause the brow to descend. Also, improper distribution of botulinum into the medial frontalis can lead to a "Spock" deformity, in which the lateral portion of frontalis is capable of contraction, but the medial portion is relaxed. The other area of frontalis action, especially in women that often goes undertreated is where the frontalis is close to the anterior hairline, which results in prominent residual high horizontal rhytids.

Fillers for grooves at the glabella:

Fillers are also often placed into the forehead to create volume and fullness in the horizontal wrinkles at the root of the nose (caused by the procerus muscle) and the verticle "elevenses" at the medial end of each brow, caused by the corrugator muscles. Knowing the underlying anatomy, including the depth and location of the various muscles, is essential for avoiding devastating complications during injections. For example, too much filler or misplaced filler when targeting the glabella (the region between the eyebrows and above the nose) can lead to a retinal artery occlusion and blindness.[4] An inappropriate injection into an artery, for example, the supratrochlear, could lead to acute necrosis of the tissue. Fillers are never injected with force or in boluses. Another approach we have found to be safe is to pinch the skin upwards with small amounts of filler injected gently.

Understanding the nerve supply to the forehead is also essential when evaluating a patient with a potential stroke. Middle cerebral artery strokes can cause contralateral facial paralysis, but these strokes often spare the forehead. This presentation is because the lower motor neurons responsible for innervating the top half of the face receive input from both hemispheres, while the lower half does not. If the injury is at the level of the lower motor neuron, as seen with Bell palsy, then we see a complete hemifacial paralysis.

Tissue expansion is needed when repairing large forehead or nasal defects. Whereas in the neck, expanders are placed in front of the platysma, in the forehead, it is crucial to place expanders under the frontalis muscles, with insertion via incisions made within the hairline. 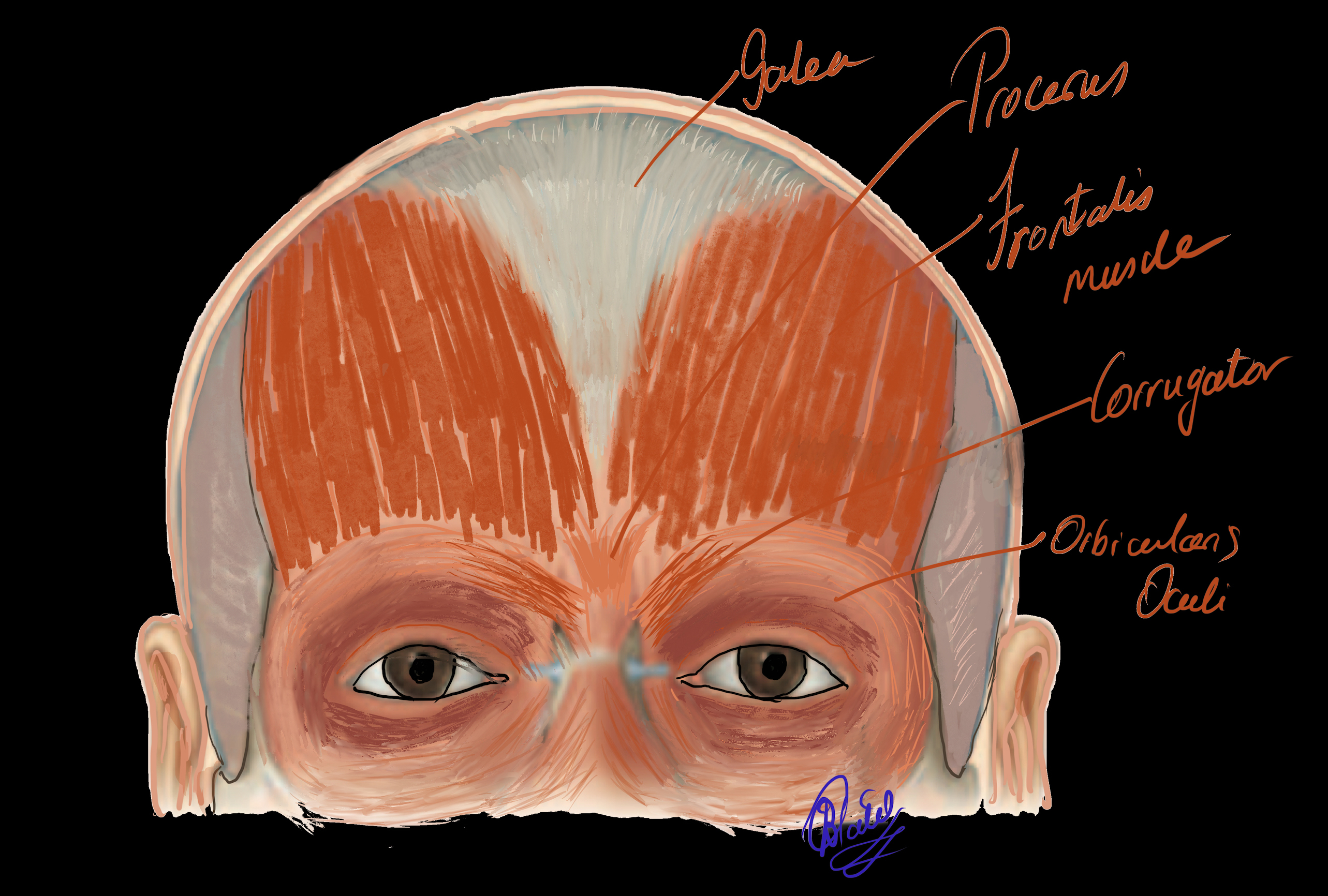 The Fronatlis Muscle which is the only elevator of the brow. The procerus, corrugator and orbicularis oculi muscles are the depressors
Contributed by Prof Bhupendra C. K. Patel MD, FRCS 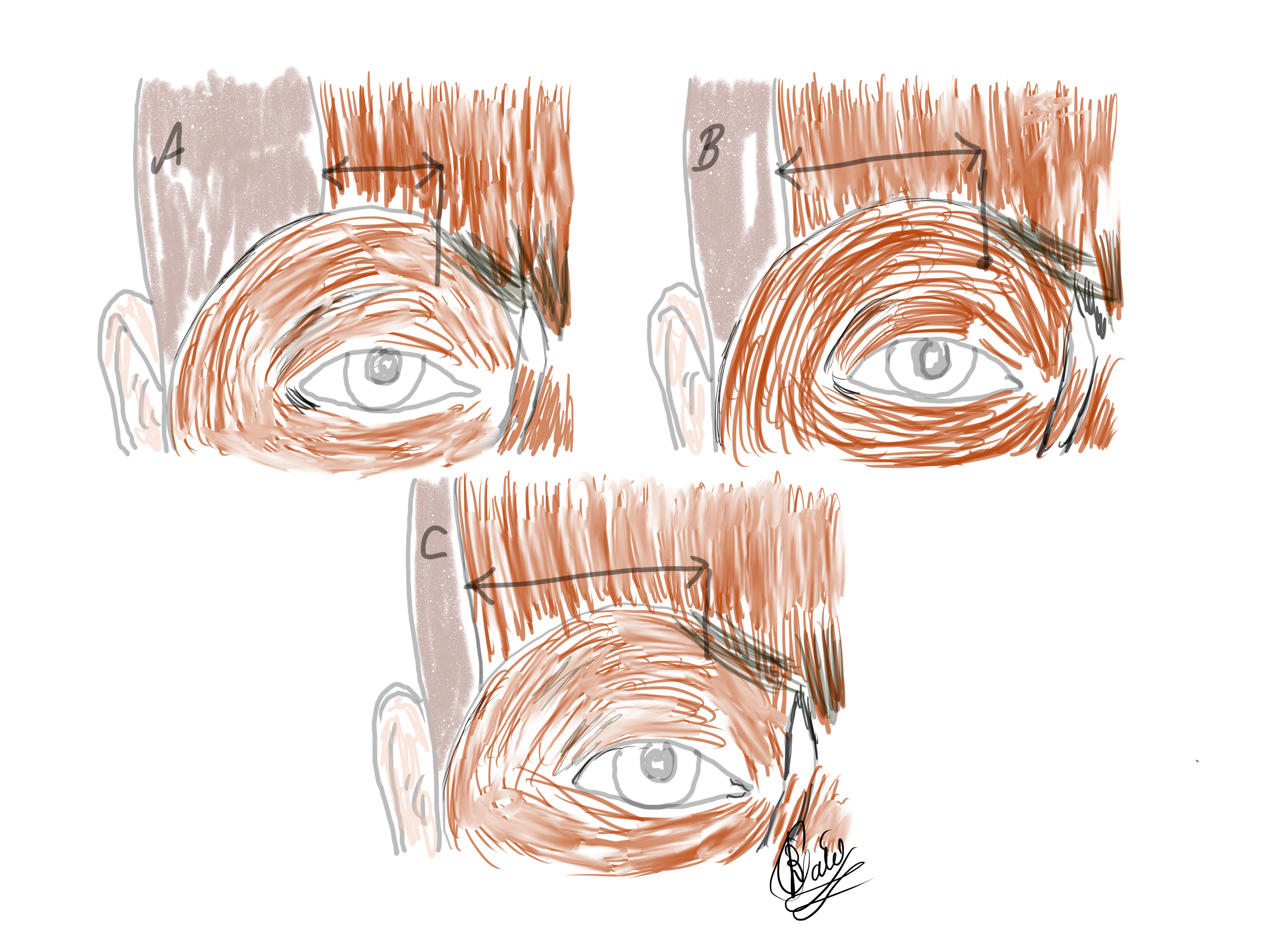 The Frontalis Muscle: The width of the frontalis muscle varies. The width can be measured from the supraorbital notch and the distances may be small, medium or large. The exact distribution of these widths in the normal population is unknown
Contributed by Prof. Bhupendra C. K. Patel Md, FRCS

The Frontalis Muscle: The angle of insertion of the frontalis muscle laterally as measured against the orbital orbicularis oculi varies: A. Large B. Intermediate C. Small It is thought that with aging the angle becomes smaller with less lateral support to the brow, thereby contributing to lateral brow ptosis
Contributed by Prof. Bhupendra C. K. Patel MD, FRCS 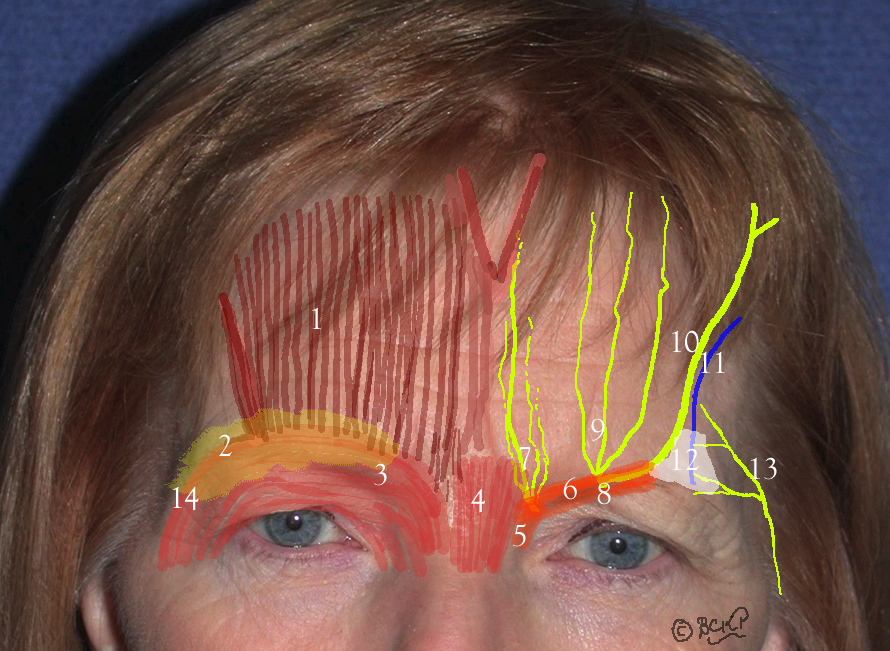 Knize DM, An anatomically based study of the mechanism of eyebrow ptosis. Plastic and reconstructive surgery. 1996 Jun;     [PubMed PMID: 8643714]

Abramo AC, Anatomy of the forehead muscles: the basis for the videoendoscopic approach in forehead rhytidoplasty. Plastic and reconstructive surgery. 1995 Jun     [PubMed PMID: 7761503]