The pupillary dilation pathway is a sympathetically driven response beginning in the hypothalamus and ending with the contraction of the dilator pupillae muscle. It is for this reason that pupillary dilation may result from any physical or emotional stress that triggers the autonomic sympathetic nervous system, which is mediated by the hypothalamus.

The pupillary dilation pathway is a three-neuron pathway; disruptions anywhere along the oculosympathetic pathway may cause Horner syndrome, which is a classic triad of ptosis, miosis, and anhydrosis of the face due to loss of sympathetic innervation. It is essential to avoid damaging the superior cervical ganglion during cervical surgery, as such damage could prompt the development of Horner syndrome.

The pupillary dilation pathway is a sympathetically driven response to stimuli and is a three-neuron pathway.[1] The first-order neuron begins in the hypothalamus and descends through the midbrain to synapse onto the spinal cords ciliospinal center of Budge, found between C8 to T2. The second-order neuron, the preganglionic sympathetic neuron, exits the spinal cord through the ventral roots and ascends through the thorax, near the lung apex and subclavian vessels, onto the superior cervical ganglion.

The superior cervical ganglion appears opposite the second and third cervical vertebrae, near the angle of the mandible and the bifurcation of the common carotid artery.[2] The third-order postganglionic neurons travel along the periarterial carotid plexus through the cavernous sinus. These axons then enter the orbit upon the short and long ciliary nerves (branches of V1, the ophthalmic division of CN V - the trigeminal nerve) to synapse on the dilator pupillae muscle, causing pupillary dilation.

Blood supply to the sympathetic chain and ganglia is primarily via the ascending pharyngeal artery, ascending cervical artery, thyrocervical trunk, and supreme intercostal arteries.[3] The internal jugular vein supplies the venous drainage to this region. As the pathway ascends past the superior cervical ganglion, the blood supply is from the internal carotid artery, followed by the ophthalmic artery. Additionally, as the pathway ascends, lymphatic drainage follows regional lymph nodes.

Any disruption along the three neuron pathways can result in loss of pupillary dilation. Although rare, damage to the superior cervical ganglion can occur as a complication of anterior or posterior cervical spine surgery, or surgery involving the thoracic outlet or lung apex. This damage presents as an abnormally small pupil with the inability to dilate due to the disruption of the cervical sympathetic nerves, known as Horner’s syndrome.[1] Horner syndrome is a classic triad of ipsilateral ptosis, miosis, and anhydrosis of the face due to the disruption of the sympathetic pathway in the head and neck.

Of note, apraclonidine eye drops are also an option in the place of cocaine eye drops.[5] Horner syndrome can also occur secondary to a variety of causes, located anywhere along the pupillary dilation pathway. These include dissection of the carotid artery,[6] brachial plexus injury, neck mass, cervicothoracic spinal lesion, and Pancoast tumors, among many others.

Clinically, monitoring pupil dilation is intrinsic to the management of opioid overdose. According to the CDC’s 2018 Annual Surveillance Report of Drug-Related Risks and Outcomes, although opioid prescribing has continued to decrease through 2017, drug overdose deaths in the United States reached a record high in 2016 of 63,632.[7] Of these fatalities, 66.4% involved opioids (42,249), the most common of which were synthetic opioids other than methadone (19,413), prescription opioids (17,087), and heroin (15,469). Amidst the opioid crisis, it is imperative to understand the treatment of opioid overdose.

Opioids are parasympathomimetics that act predominantly on mu receptors to produce feelings of euphoria, analgesia, and sedation. In toxic doses, opioids cause depressed mental status, respiratory depression (<12/min), decreased tidal volume, and pupillary constriction, or miosis. Due to respiratory depression, initial management should focus on airway and breathing, with preparation to mechanically ventilate if it becomes necessary. These measures are closely followed by the administration of naloxone, ideally via the intravenous route, which is a short-acting pure opioid antagonist.

Naloxone has a duration of approximately two hours, and repeat administration may be necessary if respiratory depression and coma return, especially if the patient ingested a long-acting opioid. Since naloxone reverses pupillary constriction, administration via injection can continue until pupillary dilation takes place. Similarly, the clinical team can monitor the size of the patient’s pupils to assess whether a subsequent dose is necessary, although monitoring of pupils should take place in conjunction with observation for the return of respiratory depression. Of note, naloxone is available OTC in many states, and expanded access to naloxone is essential for reducing opioid overdose morbidity and mortality.[8] 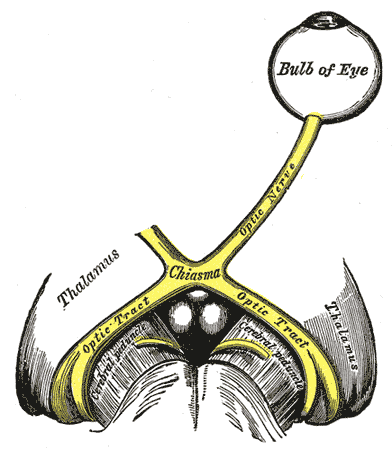 The left optic nerve and the optic tracts. A Marcus Gunn pupil indicates an afferent defect, usually at the level of the retina or optic nerve. Moving a bright light from the unaffected eye to the affected eye would cause both eyes to dilate, because the ability to perceive the bright light is diminished.
Contributed by Wikimedia Commons, Henry Vandyke Carter - Henry Gray (1918) (Public Domain)