Cerebrospinal fluid (CSF) is a clear liquid that is around and within the organs of the central nervous system. Estimates are that there is approximately 125 mL to 150 mL of CSF in the body at any given time. However, it is important to note that there are continuous generation and reabsorption of CSF. Depending on the rate of production and absorption (which varies individually), the supply of CSF can be replaced about every 7.5 hours. Most of this fluid is produced in the ventricles of the brain by the choroid plexus—however, the ependymal cells, which line the ventricles, produce a smaller portion. After production, the fluid travels through the ventricles and then around the brain and spinal cord. It is then reabsorbed directly into the blood through structures in the arachnoid mater called arachnoid villi (arachnoid granulations). Importantly, this fluid can be examined clinically through a lumbar puncture. With a lumbar puncture, physicians can look for abnormalities in the CSF, which can help create a differential diagnosis.[1][2]

CSF appears to have several important functions. One of these is functions is to provide a buoyant force to support the brain. The brain has a significant amount of mass (approximately 1400 gm) while at the same time being relatively malleable. However, since the CSF surrounds the brain, it dissipates much of the downward force that would normally act on the organ. This dissipation reduces the stress on the brain and allows for it to maintain its shape. Another function of CSF that comes from its physical properties as fluid is to protect the brain from the damage that would result from a sudden movement of the skull. Any rapid acceleration/deceleration of the head has the potential to injure the delicate contents contained within.

The CSF helps reduce the potential damage in such an event by acting as a cushion and a shock absorber. Since there are continuous production and production of CSF, it also appears to help clear waste products from around the brain and regulate intracranial pressures. This dynamic process can be controlled by either increasing or reducing production to match the central nervous system's needs at any given time. A similar regulatory mechanism can also reduce ischemia in the central nervous system (CNS) tissues. In times of ischemia, it is possible for the volume of CSF to decrease, and therefore, decrease intracranial pressures. This decrease in intracranial pressure reduces the mechanical stress on blood vessels and may reduce ischemia.[3][4][5][6]

It is not currently known when the production of CSF first begins. However, the choroid plexus is visibly developing at around 32 days of development. The arachnoid villi are also beginning to form around 35 weeks with continued development during the first 18 months of life.

Any neurosurgical intervention involving the ventricles, especially the external ventriculostomy, requires strict aseptic precautions as meningitis and ventriculitis can develop if infection infiltrates the CSF.

An important clinical test that clinicians use to monitor the CSF is the lumbar puncture (spinal tap). In this procedure, a long, hollow needle is typically inserted into the subarachnoid space of the lumbar spine just below where the spinal cord ends (usually below L2). The needle can then be uncapped, and samples of CSF can be obtained. The first thing to note when doing a lumbar puncture is the opening CSF pressure. A high opening pressure can suggest various conditions, including hydrocephalus, intracranial mass, and idiopathic intracranial hypertension. When there is an elevated CSF pressure, there is a risk of damage to the brain by reducing the pressure too quickly.

For this reason, care is necessary to make sure that no masses are pressing on the brain before performing this procedure. A low CSF pressure can also be clinically significant. This situation can occur in conditions that allow for CSF to leak into surrounding tissues. CSF can leak due to physical trauma, previous lumbar punctures, or without an obvious physical cause (spontaneous cerebrospinal fluid leak).

Several analyses are possible on the contents of CSF obtained from a lumbar puncture. Since CSF should be transparent, the color is worth noting. A cloudy appearance can suggest an infectious cause, and red color can suggest the presence of blood. Cultures can be taken from this fluid to look for different infectious agents that can cause meningitis. Additionally, molecular analyses can help to look for protein abnormalities. These tests can help to diagnose a wide variety of diseases affecting the central nervous system.[7]

Hydrocephalus is one important clinical disorder of cerebrospinal fluid. In this disorder, there is increased intracranial pressure due to an overabundance of CSF. This abundance is usually the outcome of an obstruction in the flow of CSF through the brain. In an adult, this can be the result of several different things. A few examples of possible culprits include neoplastic growths, infections (meningitis), traumatic brain injury, and hemorrhage. Hydrocephalus can also occur at birth, causing an acute enlargement of the child’s head, or it can occur later in life. Increased intracranial pressure is not as dangerous in an infant since the cranial bones fuse later in life. For this reason, an infant with hydrocephalus can present with an enlarged head. When a child is born with this condition, it is usually due to a defect in forming the neural tube or stenosis of the cerebral aqueduct.

The treatment of hydrocephalus involves removing whatever obstructs CSF flow. In cases where there is recurrence or difficulty in ensuring a non-obstructed flow of CSF, a shunt can help drain excess fluid from the intracranial cavity. These shunts most often drain the CSF into the peritoneal cavity, but they can also be placed in other locations such as the pleural cavity, gallbladder, and the right atrium of the heart.[8][9]

Idiopathic intracranial hypertension is characterized by an increased intracranial pressure (usually detected through lumbar puncture) with no discernable cause. In other words, it is unclear what is causing the increased CSF pressures. Patients often experience headaches, vision changes, pulsatile tinnitus, weakness, nausea, vomiting, etc. The diagnosis is generally made based on the history and physical exam. However, neuroimaging investigations and lumbar puncture are often necessary to rule out other potential causes.

Arnold-Chiari, also known as Chiari malformation, is the name given to a group of deformities of the hindbrain (cerebellum, pons, and medulla oblongata).[10] There are two types recognized: 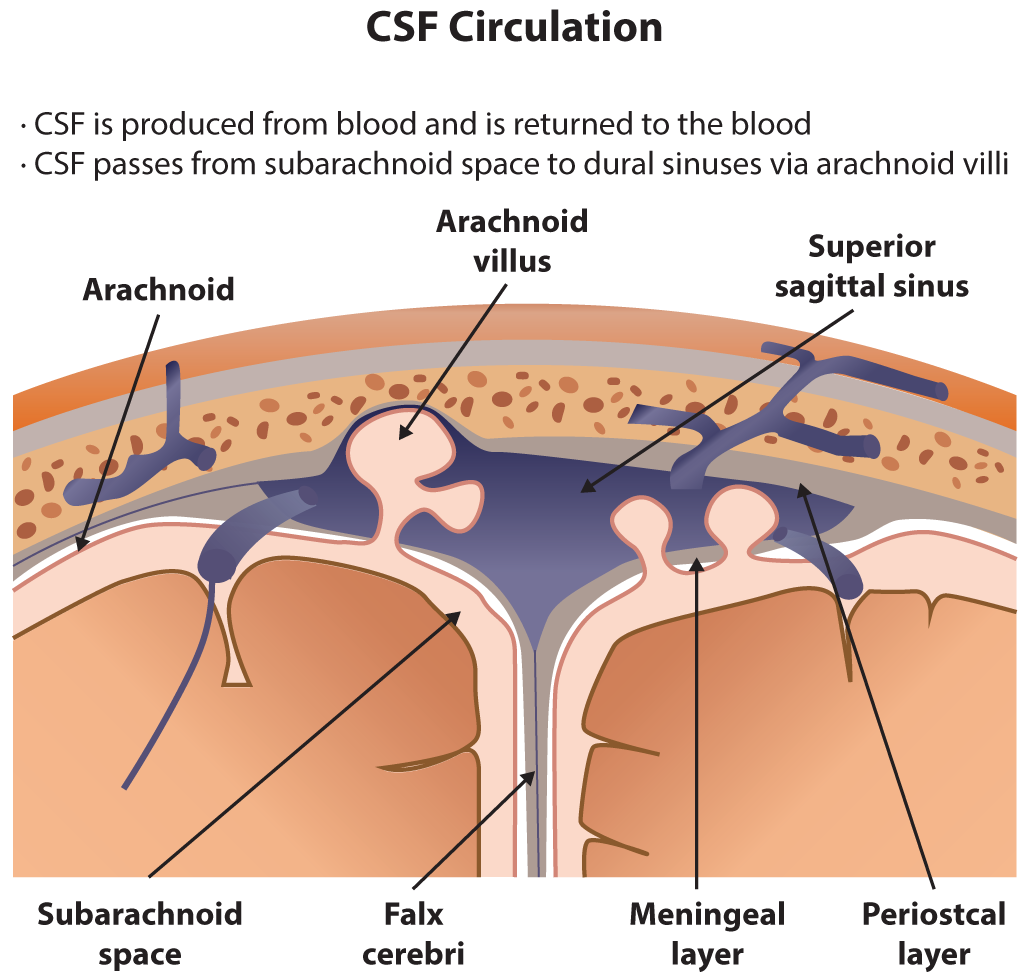 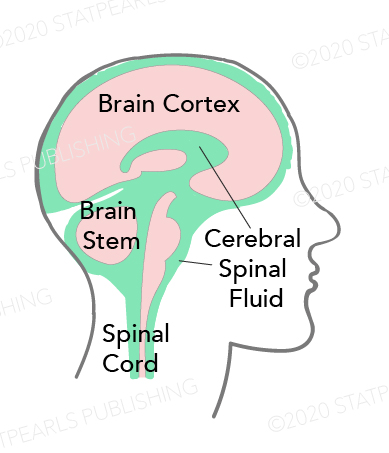