Oxidative phosphorylation is a cellular process that harnesses the reduction of oxygen to generate high-energy phosphate bonds in the form of adenosine triphosphate (ATP). It is a series of oxidation-reduction reactions that involve the transfer electrons from NADH and FADH2 to oxygen across several protein, metal, and lipid complexes in the mitochondria known as the electron transport chain (ETC). The electron transport chain utilizes NADH and FADH2 generated from several catabolic cellular processes. Also, oxidative phosphorylation utilizes elemental oxygen as the final oxidizing agent (and electron acceptor). Mitochondrial function and the electron transport chain shed light on the evolution and advancement of aerobic eukaryotic life, especially when compared to anaerobic organisms. It is the hallmark of aerobic respiration and is the reason why a plethora of lifeforms require oxygen to survive.[1][2][3]

The process of oxidative phosphorylation involves understanding fundamental concepts: electronegativity, the sources of reduced NADH and FADH2, and the anatomy of the mitochondrion.

Research into the secondary regulation of the electron transport chain (such as reversible phosphorylation of complexes), and the relationship of mitochondrial function to neuroplasticity has been underexplored. Through the exploration of such topics, the relationship between mitochondrial dysfunction and neurological pathology could be elucidated. By solidifying understanding of secondary mechanisms of regulation, the pathogenesis and clinical therapy of many diseases may be better understood.

The exergonic process of electron transfer from NADH to oxygen couples with the endergonic process of ATP synthesis. Thus, catabolic reactions (that utilize ATP) get coupled with the anabolic reaction of ATP synthesis. Both reactions require each other to operate. Approximately 30 - 32 ATP molecules are generated from the electron transport chain, while the yield for glycolysis alone is only 2 ATP. ATP generation in oxidative phosphorylation is significantly greater than glycolysis alone, due to the efficiency of energy extraction in the electron transport chain (ETC).

To harness the proton motive force to generate ATP, ETC utilizes the final complex, ATP synthase (complex V). The energy expended from pumping H+ ions into the intermembrane space is equivalent to the energy generated by ATP synthase. Therefore, the first law of thermodynamics is maintained.[1][2][8][9]

The process of electron transfer from NADH to protein complexes and finally to oxygen is intricate. There are four protein complexes involved in electron transfer that function as enzymes in the electron transport chain (ETC). These enzymes carry out oxidation and reduction reactions, permitting the transfer of electrons from one complex to the next in series. The complexes are named: Complex I, II, III, and IV. Complex V (ATP synthase) is functionally different, as it facilitates the generation of ATP (rather than electron transfer). Of the four complexes, complex I, III, and IV, all pump 4 protons into the intermembrane space. The mechanism of proton pumping involves conformational changes of the protein complex; however, the exact mechanism is still a topic of research. Each complex consists of several molecules, including iron-sulfur clusters (Fe-S), cytochromes, and prosthetic groups that all aid in the transfer of electrons.

The ETC shuttle electrons from one complex to the next, utilizing hydrophilic electron carriers, such as cytochrome C (that can travel freely through the intermembrane space) and hydrophobic, such as coenzyme Q10 (that can diffuse through the phospholipid bilayer of the inner membrane). The genetic information for the four complexes and the free electron carriers gets housed in both mitochondrial DNA (mDNA) and nuclear DNA.

The first complex (complex I) in the ETC is referred to as NADH dehydrogenase, for its role in oxidizing NADH to NAD+. This complex has enzymatic activity that allows the transfer of an electron pair from NADH to ubiquinone (Q). An electron pair from NADH is first shuttled into NADH dehydrogenase by flavin mononucleotide (derived from riboflavin, or vitamin B2), an accompanying prosthetic group. Within the complex, the electron pair is transferred sequentially from one iron-sulfur cluster (Fe-S) to another, to reach ubiquinone eventually. Ubiquinone is then reduced to ubiquinol and travels to complex II. As the electrons pass from NADH to ubiquinone, energy is released and utilized by the complex to pump 4 H+ ions into the intermembrane space. The products of the enzymatic reaction include NAD+, Ubiquinol (reduced form of Co Q10), and 4 H+ ions in the intermembrane space.

The second complex (complex II) is referred to as succinate dehydrogenase, for its role in the oxidation of succinate to fumarate in the tricarboxylic acid cycle (TCA). Note that this enzyme is involved in both the ETC and the TCA. It is also the point of electron transfer for FADH2. This enzyme transfers electrons from FADH2 to a ubiquinone molecule. This relatively small complex contains iron-sulfur clusters and a bound cofactor, flavin adenine dinucleotide (FAD). Both structures shuttle electrons from FADH2 to ubiquinone. However, not enough energy gets released in this process, and thus no H+ ions are pumped into the intermembrane space from this complex. Since FADH2 bypasses complex I and enters complex II directly, it does not contribute to the proton gradient as much as NADH does, which explains why there is a higher yield of ATP generated from NADH (about 2.5 ATP molecules) as compared to FADH2 (about 1.5 ATP molecules)

The fourth complex (complex IV) is referred to as Cytochrome c oxidase, for its role in the oxidation of cytochrome c. This highly complicated molecule consists of multiple heme groups, cofactors, and subunits. Metal ions in the heme groups (copper and iron) sequester an oxygen atom within the complex. The enzymatic action of complex IV permits the transfer of electrons from cytochrome c molecules to the oxygen atom, which functions as the last electron acceptor. During the reduction of oxygen, two H+ ions are extracted from the matrix and transferred to the reduced oxygen atom, thus forming water (H2O). Simultaneously, the complex pumps 4 H+ ions into the intermembrane space.

This enzyme’s multi-subunit structure allows for the conversion of potential energy to mechanical and chemical energy, as the F1 subunit rotates (like a turbine) with the force of protons attempting to re-enter the matrix.

The fifth complex (complex V) is referred to as ATP synthase, for its role in the synthesis of ATP using the proton motive force. ATP synthase consists of numerous protein subunits, including F0 and F1. The F0 portion is hydrophobic, rooted in the phospholipid bilayer, and contains a channel for H+ ions to pass through to the F1 portion. The hydrophilic F1 portion (shaped like a stick attached to a cylinder) is the main catalytic site. It consists of a ring of rotating alpha and beta subunits surrounding a gamma subunit. H+ ions travel from the F0 portion to the F1 portion and, in turn, force the rotation of the F1 portion, which catalyzes the binding of ADP and inorganic phosphate (Pi) to produce ATP. This process is the binding-change phenomenon.[13][1][2][10]

A crucially important biochemical process involved in oxidative phosphorylation is the generation of a hydrogen ion gradient between the inner and outer membranes of the mitochondria, also referred to as the chemiosmotic gradient. The energy from this gradient (termed the proton-motive force) is what propels the production of ATP in the mitochondrial matrix. Many molecules have been found to disrupt or impede this process in some way, resulting in both clinical and non-clinical applications. Additionally, dysfunction of the electron transport chain results in a variety of diseases, ranging from metabolic (such as mitochondrial myopathies) to neurological (such as bipolar disorder) in nature.

Cyanide and carbon monoxide are known to irreversibly bind to and inhibit protein complex cytochrome c oxidase (complex IV) of the electron transport chain, ceasing the production of ATP and resulting in cell death (and death of the entire organism at high enough concentrations). The sedative amobarbital, while a potent GABA agonist, also binds and inhibits NADH dehydrogenase, resulting in reduced ATP production.

Reactive oxygen species (ROS) are a byproduct of the electron transport chain complexes that lead to cellular damage via the production and proliferation of free radicals such as peroxides (H2O2) and oxides (such as superoxide). ROS generated from the redox reactions within the four complexes contribute to cell membrane damage and cell senescence.

Genetic mutations in mitochondrial DNA (such as MT-ND1) can produce defective complex I (NADH dehydrogenase). This defect will result in reduced production of ATP via oxidative phosphorylation. The macroscopic consequences of this mutation result in a syndrome known as MELAS (mitochondrial encephalopathy, lactic acidosis, and stroke-like episodes). MELAS encephalopathies and myopathies result in symptoms of severe weakness, seizures, and several other symptoms that begin in childhood.

Another syndrome known as MERRF (myoclonic epilepsy with ragged red fibers) involves the mutation of a variety of mitochondrial genes, resulting in malformation of many components of the mitochondrion, including the protein complexes of the ETC. The reduced ATP output through oxidative phosphorylation causes many severe clinical symptoms, including myoclonic epilepsy.[14][5][12][15][16]

Although most compounds that interfere with the ETC have a destructive function, some of them have genuine utility in the body. The uncoupling agent thermogenin is an H+ ion channel protein present in brown adipose (fat), which allows the passage of H+ ions from the intermembrane space back into the matrix. The rapid flow of H+ ions into the matrix generates heat and uncouples the ATP generating and ATP consuming reactions from each other by disrupting chemiosmosis (hence the term uncoupling agent). This heat is a significant contributor to maintaining core body temperature in neonates who would lose significant heat due to their high skin surface area to body volume ratio.[8] 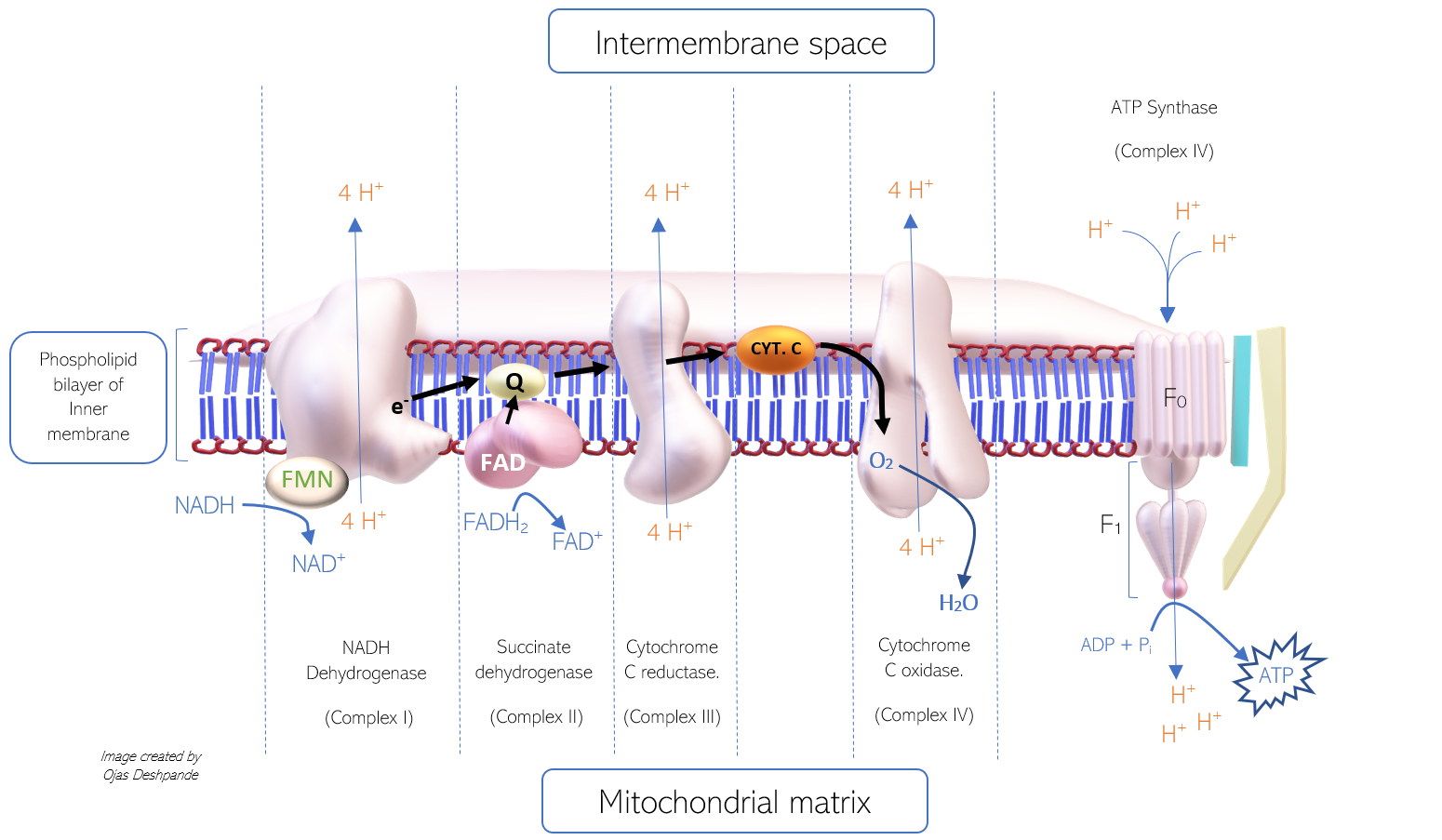 This image depicts the process of oxidative phosphorylation (Ox. Phos.) via the electron transport chain (ETC).
This image was created by Ojas Deshpande (article author).

Matlin KS, The Heuristic of Form: Mitochondrial Morphology and the Explanation of Oxidative Phosphorylation. Journal of the history of biology. 2016 Feb;     [PubMed PMID: 26238091]