Diseases of the appendix come in two varieties: infectious/inflammatory or neoplastic etiologies. The latter can come in the form of epithelial, neuroendocrine tumors (NETs), lymphoma, mesenchymal tumors, sarcomas, noncarcinoid NETs, neuroectodermal, nerve sheath, and metastases. The majority of cases, though, are epithelial and NETs, with the former occurring in middle-aged or older adults and the latter occurring in younger patients. Though neoplastic processes of the appendix are typically asymptomatic, they can grow to cause obstruction, eventually resulting in symptoms of acute appendicitis. They can also produce vague symptoms of pain in the right lower quadrant (RLQ), a palpable mass, or obstruction. In severe cases, especially with mucinous neoplasms, they can cause pseudomyxoma peritoneii, which characteristically presents as mucin in the peritoneum and serosa of abdominal or pelvic organs. Appendiceal tumors almost always cause this syndrome, and if seen on imaging, the appendix requires investigation.

Acute appendicitis is a prevalent cause of abdominal pain, with an estimated lifetime risk of 7 to 8%. It classically presents with periumbilical pain that localizes to the right lower quadrant (classically located half the distance between the umbilicus and anterior superior iliac spine (ASIS), known as McBurney’s point) as well as nausea, vomiting, anorexia, and fever. Acute appendicitis may result from an obstructing fecalith or some other mechanical blockage. A feared complication of acute appendicitis is perforation, with a risk of 2% at 36 hours, increasing 5% every 12 hours. With worsening inflammation, patients can develop more intense tenderness to palpation and guarding. Given the complications of acute appendicitis as well as the commonality, early accurate diagnosis is crucial.[1][2][3]

The vermiform appendix is a vestigial organ located at the terminal end of the cecum. Grossly, a reliable landmark for determining the base is the convergence of the taeniae coli. It is a true diverticulum in that it shares all of the same layers as the colon: mucosa, submucosa, longitudinal and circular muscularis, and serosa. It also contains scattered B and T lymphoid cells in the mucosa and submucosa, which differentiates it from the colonic tissue from which it originates.

While the location of the base of the appendix is reliable, its tail is variable in positioning. The tail is most commonly retrocecal but can be subcecal, pre-ileal, post-ileal, and pelvic. Its position can change with variables such as respiration, overlying bowel gas, and patient position. Given the differing positions of the appendiceal tail, not all presentations for acute appendicitis will be similar. The appendix is, on average, 9 cm in length and 7 mm in diameter with the wall thickness typically 2 mm or less. Diameter and wall thickness are essential indicators of inflammation where a diameter over 7 mm (over 6 mm in some locations) and a wall thickness >2 mm are criteria for acute appendicitis when imaging in most situations.[4][3]

Of all imaging modalities, radiographs have little clinical utility in imaging the appendix. If there is a concern for acute appendicitis, radiographs may rarely demonstrate a calcified fecalith, which is visible in cases of appendicitis; however, this is not a specific finding. Another potential finding on radiographs seen with complicated appendicitis can be pneumoperitoneum; however, this rarely occurs, even with rupture. Overall, the use of abdominal radiographs on a patient with acute abdominal pain typically has poor sensitivity and specificity for the diagnosis of acute appendicitis, though the identification of obstruction or free air would aid in diagnosing other urgent or emergent conditions.[5]

Computed tomography (CT) is one of the primary diagnostic modalities for identifying the appendix and diagnosing any disease present. Diagnosing appendicitis on CT has a sensitivity and specificity of 91 to 94% and 90 to 95%, respectively. Oral and rectal contrast-enhanced CT imaging most often provides no additional diagnostic benefit; therefore, an intravenous contrast-enhanced CT is the recommended procedure for appropriate diagnosis. Classically, diagnosis of acute appendicitis is by identifying an enlarged appendix (greater than 6 mm in diameter) with wall thickening over 2 mm, wall enhancement, and surrounding inflammation evidenced by periappendiceal fat stranding or free fluid. The presence of an obstructing fecalith may also be present though its absence does not preclude the diagnosis.

There has been a debate about the exact criteria for diagnosis; however, as some recent studies argue, a criteria cutoff of greater than 6mm diameter is too small and leads to negative appendectomies. Their research shows that though this may be a suitable cut-off for pediatric patients, many adult patients have normal appendix diameters between 6 to 7 mm. Therefore, some studies suggest using a cut-off value of over 7 mm (8.4 mm in one study) to improve the prognostic capability of CT.

For the diagnosis of neoplasms, CT has a sensitivity of 95% in symptomatic patients. IV contrast, as well as oral contrast, can be beneficial for the identification and staging of tumors. The diagnostic criterion is an enlarged appendix greater than 15 mm in diameter, characteristics of cystic dilatation, or a soft tissue mass. There may be mucoceles that can vary in size due to the underlying cause: mucoceles less than 2 cm are likely from luminal obstruction, whereas neoplasms typically cause larger mucoceles. They will appear as a dilated appendix with homogenous low-attenuating material, with or without irregular and nodular wall thickening. Other neoplasms may demonstrate a soft-tissue mass, periappendiceal fat stranding, invasion of adjacent structures, or lymphadenopathy. Specifically, if a NET is suspected, one would look for a very small (less than 1 cm) submucosal mass in the distal appendix, which enhances significantly with or without calcifications. However, NETs are typically too small to be seen on imaging.[6][7][2][3][1]

Magnetic resonance imaging (MRI) has recently been increasing in use for the pregnant and pediatric populations due to the lack of ionizing radiation. It has a sensitivity of 96 to 86% and specificity of 96 to 97% in evaluating for appendicitis, though it has been shown to be slightly more effective in identifying the appendix in adults versus children. The study is typically performed without contrast though there is variability in imaging protocols at different facilities. The criteria for appendicitis include the visualization of the enlarged appendix (over 7 mm diameter), wall thickening over 2 mm, peri-appendiceal fat stranding, fluid-filled appendix, or free fluid. These are consistent imaging criteria throughout the different modalities.

Another primary use for MRI is in the staging of appendiceal neoplasms as it is more accurate than CT. The accuracy increases to 90% by adding diffusion-weighted imaging (DWI), which helps to identify highly cellular tumor implants. Solid tumors will demonstrate restricted diffusion, which delineates them from the adjacent organs. When included with delayed gadolinium-enhanced imaging with oral and rectal contrast, the sensitivity is 95% and specificity 70%.[6][1]

Ultrasound (US) has similar indications to MRI, though it remains the most useful in children who have thinner musculature and less abdominal fat. It has a sensitivity of 78 to 88% and a specificity of 83 to 94% for diagnosing acute appendicitis. It is highly operator dependent, however, and therefore an equivocal or negative study cannot rule out appendicitis.

The exam employs graded compression and evaluates several factors: diameter (over 6mm), surrounding peri-caecal fat, peri-appendiceal inflammation, free fluid, presence of reactive lymph nodes, and mural hyperplasia. Surrounding inflammation is often the most reliable sign of appendicitis on US imaging, and the lack of its presence is a reliable indicator to rule it out.

A common mimic of appendicitis on sonographic imaging is lymphoid hyperplasia, which is a benign condition causing enlargement of the appendiceal diameter, but specifically in the lamina propria. The lamina propria can be seen as a hypoechoic later in the innermost of the appendix. If thickened by more than 0.8mm, that is diagnostic of lymphoid hyperplasia, even in the setting of an overall enlarged appendix. This condition is non-operative and typically associated with inflammatory diseases such as viral enteritis.

When investigating for neoplasm, mucoceles may also be visible on ultrasound. They appear as an ovoid cystic mass with variable echogenicity. Typically they will have concentric echogenic layers (“onion skin”), acoustic shadowing from mural calcifications, and the appendix will be pear-shaped. They can also demonstrate regional adenopathy, fat stranding, and free fluid.[2][6][8]

Imaging of the appendix is the vast majority of the time, for the investigation of acute appendicitis. The use of imaging for appendiceal neoplasms, though less commonly done, does have high sensitivity and specificity. If the patient is having symptoms, the accuracy is improved further; these can be symptoms of acute appendicitis (which is most common), abdominal pain, palpable mass, obstruction, or distension. The imaging study can be used to not only diagnose the tumor, but it can also be used to stage the tumor in the classic TNM staging system. The staging typically takes place via MRI. These studies more often identify epithelial tumors, not NETs, due to the very small size and nonaggressive behavior of NETs. Overall, the definitive diagnosis of neoplasms requires pathologic examination after appendectomy.

On the other hand, appendicitis is regularly diagnosed with radiology studies. In fact, imaging is often the deciding factor between operative and non-operative management. Though the diagnosis can be clinical following a thorough history and physical, imaging is regularly employed to confirm. The most commonly used radiographic study is the CT scan, given its speed, sensitivity, and specificity. Though MRI and US are also very reliable ways to diagnose acute appendicitis, they have their limitations. Ultrasound is highly operator dependent and tends to work best on individuals with less fat and muscle content in their abdomen (i.e., children). MRI is not always readily available, especially in smaller hospitals or rural settings. It is also a more prolonged study, and it may be more difficult for patients to be still while they are in acute pain, especially in children. Currently, the negative appendectomy is less than 10% in men, but can be up to 20% in women; accurate imaging studies could reduce the number of unnecessary surgeries performed on patients. It is, therefore, essential to know which study will provide the clinician with the most accurate information for their specific clinical scenario.[1][7] 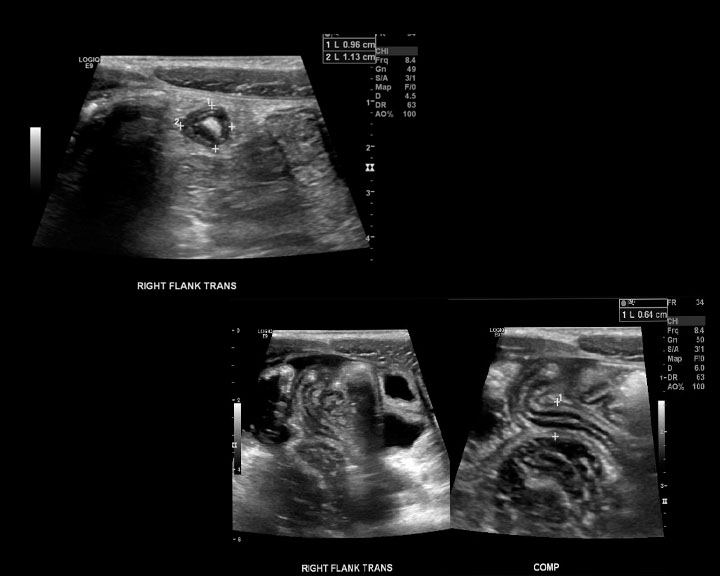 Ultrasound of the right lower quadrant with findings of acute appendicitis. There is a blind ending tubular structure measuring up to 7 mm in diameter.
Contributed by Kevin Carter, DO 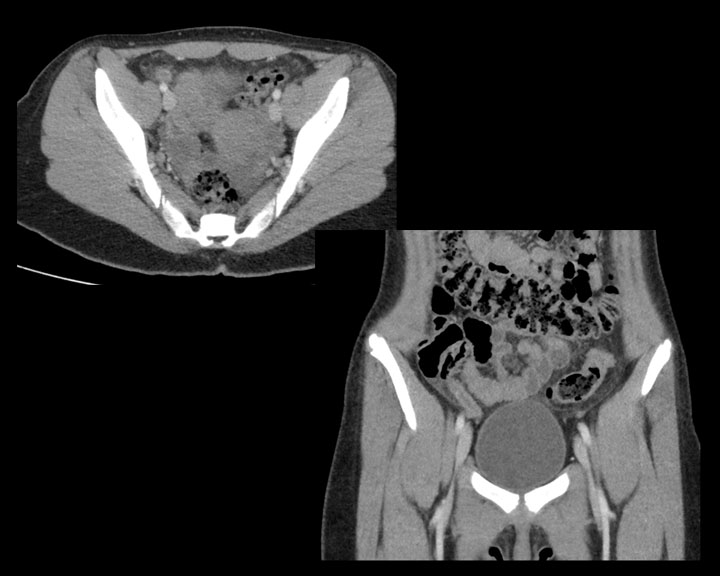 CT of early acute appendicitis. In the right lower quadrant there is a mildly dilated appendix that is filled with fluid having adjacent fat stranding.
Contributed by Kevin Carter, DO

There is acute appendicitis with a dilated fluid filled tubular structure in the right lower quadrant on this axial and sagittal images with a surrounding fluid collection and stranding due to developing abscess.
Contributed by Kevin Carter, DO 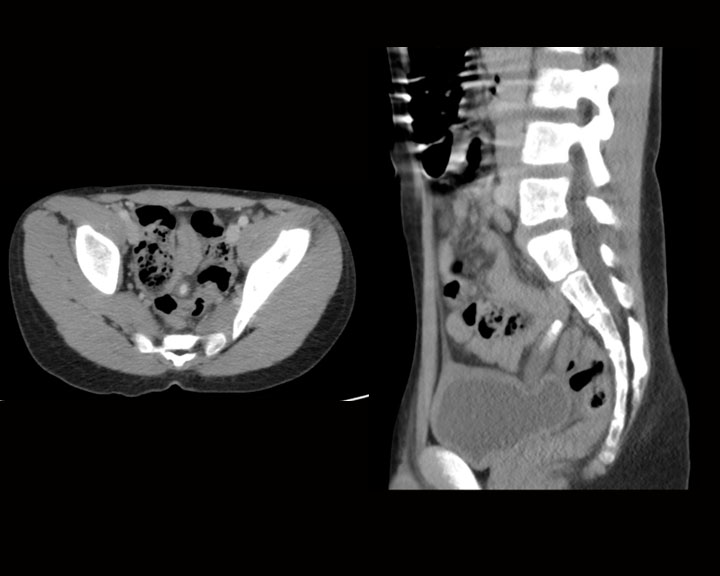 Early acute appendicitis with the dilated fluid filled appendix containing an appendicolith, the appendix is sitting on the urinary bladder.
Contributed by Kevin Carter, DO