"I need that like I need a hole in the head" is a colloquialism used to emphasize the fact that someone does not need something. If one examines this saying from an anatomical standpoint, a hole in the skull is referred to as a foramen (pl. foramina). The skull is a crucial osseous structure that houses a network of neurovascular and lymphatic vessels. For these networks to traverse and communicate with the entire body, the foramina must provide passage through the skull. The morphology of the foramina creates a protective enclosure for these neurovascular and lymphatic bundles.[1] This article will cover the major and vital cranial foramina and the contents within them.

The cranial foramina are best categorized according to their anatomical position within the cranial cavity floor. There are three distinct sections of the cranial fossae: anterior, middle, and posterior. Each of these regions contains a network of structures that are essential for day-to-day functioning.

The anterior fossa is composed of three specific bones: frontal, ethmoid, and lesser wings of the sphenoid. Together, these bones comprise the shallowest recess of the cranium. Specifically, the cribriform plate of the ethmoid bone is porous in its structure and allows for the passage of olfactory axons of cranial nerve (CN) I through its many foramina into the nasal mucosa. These axons are responsible for the sense of smell. As scents are detected, information gets relayed from the olfactory axons into the olfactory bulb where the sensory input will transfer along the olfactory tract to the entorhinal and piriform cortex of the brain.[2] Also, another foramen worth mentioning is the foramen cecum. It encompasses emissary veins that drain the nasal cavity of blood and reroutes it to the superior sagittal vein. It is largely responsible for cerebral cooling given its valveless architecture.[3]

Before focusing on the middle fossa, a transition area between the anterior and middle fossae known as the superior orbital fissure merits examination. While not defined as a strict foramen, its function is similar, and it is included when discussing the cranial foramen. Its shape differs in that it is more oblong and furrowed. A pair of superior orbital fissures are situated bilaterally between the lesser wing of the sphenoid bone superiorly and the greater wing of the sphenoid bone inferiorly, the fissure allows motor innervation to the ocular muscles, sensory innervation to lacrimal glands and portions of the face. Anatomically, the following structures are in order from superior to inferior:

Similar to the anterior fossa, the middle cranial fossa is also composed of three specific bones: the sphenoid and the paired temporal bones. It is home to neurovascular structures important for supplying sensory innervation the face, the sense of vision, and blood to the cranium.

The sphenoid bone houses the following structures through the various foramen:

The temporal bone transmits the internal carotid arteries bilaterally through their respective carotid canals before forming the middle cerebral arteries (MCAs) on either side. The MCAs then connect and form the circle of Willis that will supply the brain with blood.

Like the anterior and middle fossae, the posterior cranial fossa is also composed of three specific bones: the paired temporal bones and the occipital bone. It is the deepest of the fossae and is responsible for several passages that contain neurovascular bundles in each region of the fossa.

The temporal portion of the posterior fossa contains the following structure:

The occipital portion of the posterior fossa contains the following neurovascular structures:

Instead of examining specific cases that require neurosurgical intervention, this article will stress the important concepts of the surgical patient. A neurosurgical consult, as well as proper medical imaging, are the first crucial steps to determine the specific pathology and whether or not surgical intervention is required. Furthermore, the physician must account for the risk and benefits of the procedure(s), as patient autonomy. If surgical intervention is necessary and agreed upon, the exact procedure(s) may vary on a case-by-case basis depending upon the severity of the pathology and risk/benefits of the approach.

This section will cover the most commonly encountered clinical issues that involve the cranial foramina.

Continuing with traumatic injury to the cranium, specifically damage to the middle meningeal artery can result in epidural bleeds. The middle meningeal artery branches from the maxillary artery in the middle cranial fossa with the assistance of the foramen spinosum guiding its passage as it until it splits to its respective anterior and posterior divisions.[10] Non-contrast computed tomography is necessary to evaluate for epidural bleeds in the case of head trauma.

A unique and distinctive condition known as crocodile tears syndrome is a unique condition that affects the greater petrosal nerve within the foramen lacerum. Iatrogenic injury from surgery or conditions like Bell palsy can allow the nerve to incorrectly innervate the lacrimal gland instead of the submandibular gland during recovery. When exposed to gustatory or olfactory stimuli, unilateral tearing will occur on the side of injury instead of increased salivation.[11]

The second clinical correlation of noteworthy importance is Vernet syndrome. Also known as jugular foramen syndrome, this disorder involves cranial nerve palsies of cranial nerves IX-XI. Occasionally, CN XII will be affected as well. These cranial nerve palsies are usually caused by direct compression from masses of the jugular foramen such as acoustic neuromas, meningiomas, or glomus tumors.[13][14][15][13] Patients will often complain of the following symptoms:

When people say, "I need that like I need a hole in the head.", they probably do not realize how necessary the foramina in their skulls actually are. 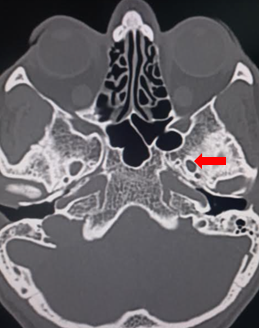 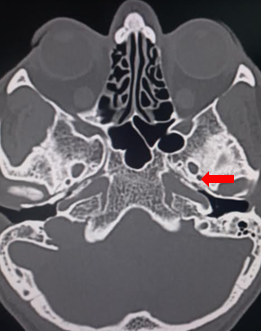 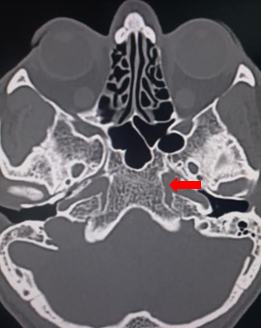 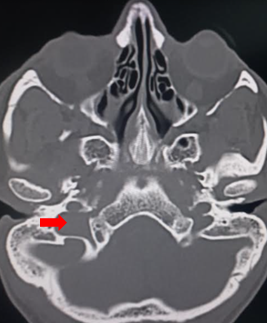 McGonnell IM,Akbareian SE, Like a hole in the head: Development, evolutionary implications and diseases of the cranial foramina. Seminars in cell     [PubMed PMID: 30385045]